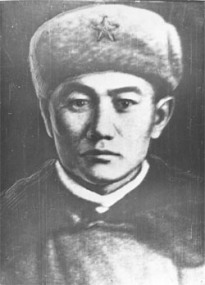 Hero of the Soviet Union

"You love life - to know how to fight for it." These are the words of our fellow countryman, the Hero of the Soviet Union Tulegenov Tokhtarov.

He was born December 19, 1920 in the village of Kara-Kuduk Ulan district of the East-Kazakhstan region. He studied at the Kazakh school № 10 in Leninogorsk (now - the School named by Tokhtarov). Since childhood, was an honest, firm in his decisions, demanding of himself and his comrades. On the eve of the war he worked at Leninogorsk lead plant the worker on refinement.

From this December day in 1941 went to the Soviet army. At the front of Tulegen identified in a company of machine gunners lieutenant Solovyov. He fought in the ranks of the illustrious Guards Division, commanded by General Panfilov. The young soldier quickly entered the military family, perfectly mastered the machine.

Tulegen bravery and courage often drags the company of men, acting boldly and decisively. Across the front of the exploits of glory thundered submachine T. Tokhtarova.

"... Tulegen was alone in the house in flames. Was unbearably hot. Acrid smoke hurt his eyes. Does not silence, beat machine Tokhtarova. Tulegen forces gradually left, but he heard a familiar rallying cry that stirred up, increased tenfold force Enduring ... avalanche swept the enemy Soviet fighters. Tulegen jumped out into the yard and the rear of the Germans threw grenades. This caused confusion in the ranks of the enemy, and they panicked and fled. Tulegen himself personally destroyed over night 150 German soldiers and officers. "

Since then, it has firmly established itself for the glory of a fearless and courageous war.

February 5, 1942 brave soldiers one of the first burst into the village Nagatkino and fire from his machine destroyed 7 fascists and two captured.

Tulegen wanted to go back to the factory worker in the home team, but the enemy bullet ended his life. It happened like this.

Division, which fought Tulegen, February 10, 1942 led a tough fight with the enemy, much superior force, with the village of Borodino. The Germans repeatedly rushed to the attack, but each time retreating under deadly fire of Panfilov's Division soldiers, leaving the battlefield many dead and wounded.

It so happened that on the defensive line Tulegenov Tokhtarov went on the attack about a platoon of Germans. The soldier was not taken aback. Point blank shot he were pressing on all sides by the Nazi's. During the fight Tulegen was seriously wounded in the stomach. Soon the machine stopped. Run out of bullets. The Germans came closer and closer. Right on Tulegen fled the officer. Through his pain, guard stood to his full height and with a gun at the ready ran toward the Nazi's. In a few jumps he caught the officer hit with a rifle butt. He fell down dead. A Tulegen overtaken by an enemy bullet.

The newspaper "For the Motherland" of the day 25 - anniversary of the Komsomol was printed: "Komsomolets Tulegen Tokhtarov, being mortally wounded, he found the strength to smash the skull of the German officer - forty-ninth in this fight."

On the territory of Leninogorsky polymetallic plant is a monument to the hero. Name Tulegen Tokhtarov named one of the central streets of the cities of Ust-Kamenogorsk and Leninogorsk.