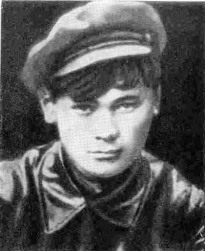 One of the organizers of the Young Communist League Central Asia and Kazakhstan, the leader of the Komsomol, the Communist Youth International, the Communist Party of Turkestan and TurkASSR.

Muratbaev Ghani (1902-1925) born in Kyzyl-Orda region. One of the organizers of the Young Communist League Central Asia and Kazakhstan, the leader of the Komsomol, the Communist Youth International, the Communist Party of Turkestan and TurkASSR.

In the 1910-1918 years. Muratbaev studied in Kyzyl-Orda Russian-Kazakh school, higher primary school. Actively participated in the establishment of Soviet power in the county and create Kazaly Red Guard.

In 1919, he took part in the suppression of the anti-Soviet uprising in Tashkent and then Verne.

As of 1920-1921. Tashkent external graduated Russian pilot a model high school. At the same time Muratbaev lectures in schools, organizes short courses to train teachers, guides the young men of the people in the various schools of Turkestan and beyond, taking care of their material security. In autumn 1923 he was preparing to enter the University of Turkestan.

At this time Muratbaev was the executive secretary of the Komsomol newspaper Turkistan "Jas Alash" and the chairman of the organization of the Bureau of the communist education of the Kazakh-Kyrgyz youth.

In 1921, at the III Congress of the Communist Youth League of Turkestan was elected a member and secretary of the Central Committee. In the same year, during the famine Muratbaev unfolded much organizational work on the device of refugees, creating power points, sending food to disaster areas.

As of 1922-1924. Muratbaev - a member of the secretariat responsible Asian Bureau of the Central Committee of Komsomol, led the commission to assist the Komsomol organizations of the Khorezm and Bukhara Soviet Republics. For taking the energy in guiding the work of the Komsomol organizations of Central Asia and the Khorezm and in the fight against Basmachis Muratbaev was awarded the Order of the Red Banner of Khorezm Soviet Republic. At the same time he was chairman of the commission to study the history of the Communist Youth League of Turkestan.

Lung disease caused Muratbaev in March 1925 to go to Sukhumi, but the treatment did not help, and April 15, 1925 he passed away. Muratbaev did a lot for the formation and development of the Komsomol of Kazakhstan. Honorary Sailor Navy RSFSR.

Catching the Komsomol, Muratbaev paid great attention to the development of the national culture. He was interested in folk epic songs, kui, he urged, and made every effort to record and preserve the best works of folk art. Muratbaev was mentioned in the musical work A.V.Zataevicha "1000 songs of the Kyrgyz people."

In Almaty, the name Muratbaev named the street; Muratbaev monuments: in Moscow (on the grave, Vagankovskoe cemetery), Shymkent, Almaty.