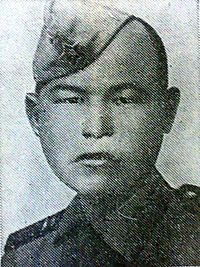 Member of the Great Patriotic War, Hero of the Soviet Union

Erezhepbay Moldabaev was born in 1925 in the village of Hatyn-cuprite, now in the city of Shymkent, South Kazakhstan region. Kazakh. He worked at the farm. Thalmann, Shymkent area Mirabeau. In the Red Army in 1943.

At the front in World War II in April 1943, the North Caucasus and the 1st Ukrainian Front.

July 29, 1944 Moldabaev first sergeant on the boat, along with the deputy battalion commander and four soldiers were to cross the river Vistula. After a fierce mortar and machine-gun fire of the enemy, their boat was smashed. Was in the boat deputy battalion commander was seriously wounded and losing consciousness, he began to sink. Moldabaev jumped into the water and pulled stomped commander and two other men on the shore.

After that, he swam to the west bank of the Vistula and immediately began to repel the attacks of the enemy, provided transportation for the rest of the men of his company. Two days with no communication with the regiment, Moldabaev among 11-remaining in the West Bank soldiers beat the Germans counter-attack. During this time they were recorded 9 counter numerically superior enemy forces. The bridgehead was withheld, which ensured crossing the rest of the regiment.

Moldabaev sergeant killed in action 07.08.1944 year. The title of Hero of the Soviet Union awarded 23.09.1944 year. He was buried in the village Grudza, Yanovsky of the district, Lublin, Poland.

The medal "Gold Star" Hero of the Soviet Union (Decree of the Presidium of the Supreme Soviet of the USSR from 09.23.1944 years);

The Order of Lenin (the Decree of the Presidium of the Supreme Soviet of the USSR from 23.09.1944 years);