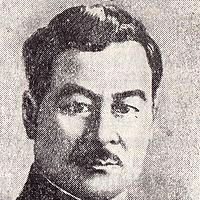 Member of the revolutionary movement, the Civil War, the struggle for the establishment of Soviet power in Central Asia and Kazakhstan

Magazy Masanchi (1885 -1938) - member of the revolutionary movement, the Civil War, the struggle for the establishment of Soviet power in Central Asia and Kazakhstan.

Born in Verne. By nationality - Dungan.

In 1917 he was elected to the Masanchi soldiers' committee and sent to the representative of the garrison to the Tashkent City Council. He took part in the armed uprising of the workers and soldiers of Tashkent, which is November 1, 1917 ended with the establishment of Soviet power in the city. In 1918 he joined the Communist Party.

January 18, 1919 Masanchi in the Red Guard units participated in the elimination of the anti-Soviet uprising Osipovskii. At the head of the Muslim Red Guard detachment fought the robber bands and Kokand autonomists. The fall of 1919 to address Turkkomissii RCP (b) and SNK Turkestan Autonomous Republic Masanchi led the Muslim battalion behalf of the Communist International was moved to the Seven Rivers, where he participated in the defeat of the White Guard mutiny in the county. At the end of 1920 under the leadership of Masanchi was organized Turkestan Dungan Cavalry Regiment.