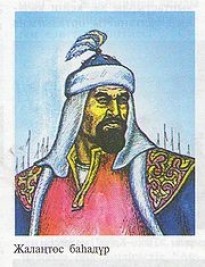 Military leader, the Emir of Samarkand

Is grandfather Aiteke. Zhalantos Batyr born in prisyrdarinskihih lands in 1576, in a sort of tribal encampments Tortkara (Alimuly). This is the territory of modern Kazalinsky Kyzylorda region. Father Zhalantos Setkul-Qadi, was a wealthy and influential man in these lands, and enjoyed great prestige. At the time, migrations kind Alimuly reached along the Syr Darya to Fergana, Kashkandari and Surhandari. Alshyny in the Middle Ages as part of the Kazakh nation lived on the territory of Tashkent, Samarkand, Bukhara, together with the Uzbeks  and Kyrgyz Karakalpaks. Territory, where the city of Samarkand Alshyny (Alimuly) believed their own, and these lands were in the area of ​​migrations of the tribe. It is not surprising that Zhalantos later became the ruler of Samarkand. In 1581, Khan and his father Shygaev Zhalantos Seitkulov moved to the mountains Nurat under Bukhara.

From an early age Zhalantos began working at the rate of the Kazakh Khan Dinmukhamed and learned a lot from their rulers. At the age of 12 years Zhalantos entered the service of the Khan Dinmuhamed. In the mosque, he received his first education. Also studied in a special military school Bukhara Khan, where trained future rulers and military leaders. As a result Zhalantos very early learned the management science and military affairs. In 1593 at the age of 17 years shall be elected bi of Zhalantos of birth alimuly who roamed the territories of cities Bulangar, Layysh, Kattykorgan. And in the years 1595-1598 is trained in Baghdad. Khan noted for his age great mind of his assistant. When Khan Bekmuhammedov Zhalantos warrior was already a member of the board of the Khan, an adviser on military affairs and deputy vizier for Home Affairs. After the death of Khan Bekmuhammedov Zhalantos warrior did not recognize the legitimate claimant to the throne of the Khanate of Bukhara, a representative Shaybanidskoy dynasty Abd al-Mumin Khan and contributed to the construction of the throne representative Ashtrahnidov Imam Kuli Khan. As a result, new Zhalantos Khan appointed in 1612 by Emir (ruler) of the city of Samarkand

At the youthful age of Zhalantos different resistance and military pragmatism, and received the title batyra. And for the successful battle with Dzhungars graduated honorary title - the title of "atalyk." In 1640, the year the army under the command of Zhalantos breaks invaded the land of nomadic Kazakhs and Uzbeks djungars. Later Zhalantos receives the rank tumenbasy (commander of a detachment of ten thousandth). Jungars military expansion continues to apply in the future Dzhungars perform devastating attacks on land Zhetysu.Zhalantos comes to the rescue of their brethren led 30000th well armed contingent of Samarkand. The army Zhalantos helps to release the Seven Rivers of invading Jungars led Batura-huntaydzhi.

In 1643 Zhalantos came to the aid of Khan Khan Zhangir Orbulakskoy in battle. This time, it was enough to 20-thousand. forces to influence the positive outcome of the battle. In 1646, a conflict between the Khan of Bukhara Abdul-Aziz and the Shah of Iran. At the strategic city of Khorasan and Balkh claimed as Bukhara and the Mongol dynasty ruling at that time in Iran. As a result, war broke out.

Zhalantos was known not only feats of arms. He gave a lot of construction of new facilities and the Arts. So for example, with the heart of  Samarkand, Registan Square Zhalantos built a madrasa "Shirdor" ("Lion's madrassas"), which was a historic and cultural monument.

He also built a madrassa in Samarkand "Tilla Kari" ("adorned with gold"). These architectural structures are the adornment of modern Samarkand and attract tourists from all over the world. In the history of architectural art of the buildings on the East craftsmanship rank high.

In 2001, the city was Kizilorda Scientific Conference on "Zhalantos Bahadur and Kazakh statehood in the Middle Ages." The conference was attended by scientists, politicians, writers, Kazakhstan and Uzbekistan and other countries. Also in Kyzyl-Orda was a music competition on the 425th anniversary of the famous batyra.