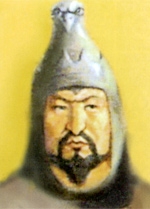 Koblandy batyr was a 15th-century legendary warrior from the Kara-Kipshak tribe whose exploits were known through folk legends and epics about the battles between him and Kalmyk Warriors. The heroic epic of Kazakhs "Koblandy batyr" was dedicated to him. There are 29 versions of the epic. The most extensive version is by Marabay, which was a fiction work based on historical events.

The name of real people and places was in the epic. Koblandy batyr was presented as an invincible warrior in heroic epics and legends. Koblandy batyr did not divide his countrymen according to their tribes. He loved and defended all steppes without asking about their zhuz (tribes). As a youth, he was close to the head of the State Nomadic Uzbeks Abylkhayr Khan. When Koblandy batyr killed the Dayyrkozha (nickname Akzhol bi) in the desert, elders of Argyn tribe demanded to give the killer from Abylkhayr Khan. He refused them. This event was one of the reasons for sultans Kerey and Zhanibek to move to Mogolistan, where they formed the Kazakh Khanate. Koblandy batyr took a part in the political life of Nogay Orda. He participated on conquers to Kazan, where he fought with descendant of Edige bi — Alshagir.

Koblandy batyr was considered as a fictional character for a long time. History about him is not getting old, akyns created songs about his heroism and unique feats for homeland glory.

In the 21st century the archaeologists and anthropologists Orazak Ismagylov and Ainagul Ismagylova excavated his grave and reconstructed the remains found there, proving that Koblandy batyr had actually existed and was not just a legend.