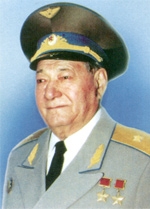 Talgat Zhakypbekovich Bigeldinov - twice Hero of the Soviet Union, was born on August 5, 1922 in the village of Maybalyk Akmola region of Akmola region into a peasant family. Childhood and youth spent in Frunze, 16 years became engaged in a flying club. In 1942, he graduated from the Talgat Chkalovskoye Military Aviation School.

Since January 1943, he fought at the Kalinin, Voronezh, Steppe, the first and second Ukrainian fronts in the 144th  Guards destroyers and aircraft. In the last months of the war, his storm troopers took part in the Battle of the Oder and in the defeat of the enemy's rate. During the Great Patriotic War was the front Talgat Bigeldinov promoted from private pilot to commander of an aviation regiment, made 305 sorties. He was famous for his courage, ingenuity, skill.