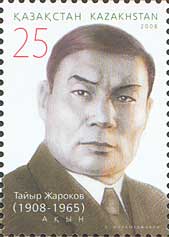 He was born on September 22 (October 5, New Style), 1908 in a. Urda Dzhanybek region of the Ural region in the family of a poor herdsman.

He studied at the Russian-Kazakh aul elementary school, then in the Orenburg Kazakh folk and educational institute.

In 1932 he graduated from Kazakh Pedagogical Institute, in the same year Zharok - Secretary of the Union of Writers of Kazakhstan, Kazgoslitizdata editor, deputy editor of the newspaper "Kazakh әdebieti."

In the years 1938-1942 - the literary secretary of the national bard Zhambyla Zhabayev.

Is a member of the Great Patriotic War.

Died March 11, 1965 in Alma-Ate.Pohoronen at the central cemetery of the city of Alma-Ata.