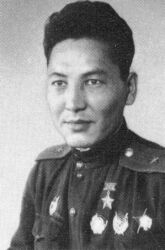 Kazakh Soviet scientist and teacher, writer, member of the Academy of Pedagogical Sciences of the USSR, Honored Worker of Science of the Kazakh SSR, Doctor of Philology, Professor.

Born 2 (15) November 1915 in the village of Koysalgan (now Zerendy district of Akmola region of Kazakhstan). Is a direct descendant of the Kanaya Kuttymbetuly - Kazakh beating, one of the leaders of the Kazakhs of the Middle Horde, a prominent military leader, General Counsel Abylaikhan and public figure XVIII century. Belonged to the Middle zhuzu to section karauyl tribe argyn [citation needed 619 days]. From 14 years old boy got raised in a family famous Kazakh writer Sabit Mukanova.

He graduated from the Kazakh Abai Pedagogical Institute in 1935. After graduation Gabdullin Malik was in military service (1935-1937). He then worked as an employee in a literary newspaper "Sotsialistik Kazakhstan" (1937), deputy editor of the newspaper "Kazakhstan Pioneer" (1938), Fellow of the Institute of Language and Literature KazFAN of the USSR (1938), in the years 1938-1946 - post-graduate KazPI Abay.

In 1941-1945 he participated in the Great Patriotic War in the 8th Guards Division named IVPanfilov, 3rd Shock Army, Kalinin Front.