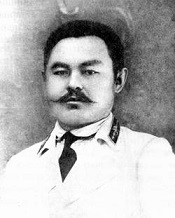 Kazakh public figure, the second deputy of the State Duma of the Russian

Mukhamedzhan Tynyshpaevich Tynyshpaev, (May 12, 1879 - November 21, 1937) - Kazakh public figure, the second deputy of the State Duma of Russia, Prime Minister of the Turkestan autonomy, a member of the "Alash Orda", the first Kazakh railway engineer, an active participant in the design and construction of the Turkestan-Siberian Mainline. Arrested in 1937 and rehabilitated in 1970.Mukhamedzhan Tynyshpaev born 12 May 1879 in the foothills of Zhilandy Makanchi-Sadyrovskogo district Lepsinsk Semirechensk county area. His father Tynyshbay, came from a noble Kazakh family, was a member of the land committee, set up military governor of Seven Rivers General GA Kolpakovskii. In 1889, he took his son to the city faithful to training. Mukhamedzhan successfully completed the two-year preparatory class and then began to study at Verny gymnasium. For the success of girls he constantly received certificates for good performance.