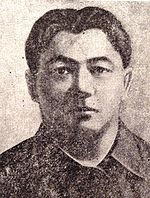 The Party and the Soviet leader of Kazakhstan and Central Asia. A member of the Communist Party

Born in a family ball (non-urban inhabitants). In 1908-1918 he studied at the gymnasium Verny. In 1917 he collaborated in the satirical newspaper "Sadak", which produced the Joint Union of Muslim workers. On the day of matriculation joined the 1st Semirechensky socialist Red Guard Regiment medic. Was a member of the suppression of the White Cossack uprising (April - May 1918), followed by the assignment of staff Semirechensk (North) Front has been working behind the enemy lines.