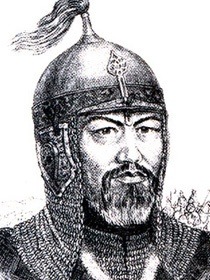 Bogenbay Batyr was a famous Kazakh warrior from the 18th century.

Bogenbay Batyr was a famous Kazakh warrior from the 18th century. 'Batyr' is an honorific term meaning hero in the Kazakh language.He was born near Syr Darya river.His father Aksha was a notable man among Kanzhigali clan.Tauke Khan who was one of the Kazakh khans of the Kazakh Khanate entrusted the army of 80 thousand men to Aksha. He was also keen in elocution.Bogenbay Batyr inherited this abilities of his father. Starting from his childhood he studied elocution and was well known among the Kazakh Steppe.He actively resisted the Dzungar invasion of Kazakh territories alongside with Ablai Khan and played a major role in liberating the Kazakhs from Dzungar rule.

Information is taken from a site Wikipedia