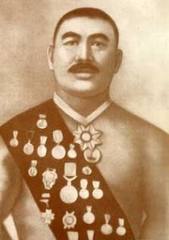 Was a Kazakh wrestler and repeated World Champion in Greco-Roman wrestling.

Qajimuqan Mungaytpasuli was born in 1871, in Karaotkyel village in Akmola Province, Russian Empire. He was 194 cm tall and weighed 139 kg. He fought in 54 countries, won 48 medals. One of the most important moments in his career was in 1910, when he was awarded the gold medal in Buenos Aires and became World Champion for the first time. One of his famous victories was the defeat of Japanese jiu-jitsu master Harakiki Jindofu, who did not survive the fatal injury of the spine he received during the fight. Several times he was not allowed to be in the Russian National team due to the Russian Empire's discriminatory policy, therefore he participated in international competitions on behalf of Manchuria with the Japanese name Yamagata Makhanura.

He died on August 12, 1948 in Lyeninskoe znamya kolkhoz (South Kazakhstan Province), without any disciples and learners and leaving his four wives in Turkestan. In 1980 a museum was opened in his honor. There are also Qajimuqan's streets in Almaty, Astana and Semey. Two Russian films were based on his life's history: Haji-Mukan (1978) and Know ours! (1985; starring Bakhytjan Esjanov, Gyeorgiy Khachaturovich and Aleksandr Pankratov-Chorny).