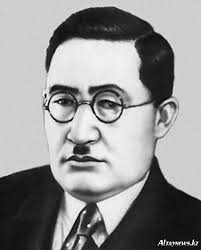 Ilyas Zhansugurov was a Kazakh poet and writer. The town of Zhansugirov in Almaty Province is named after him and he is commemorated in Taldykorgan and Almaty.

A friend of another classic writer Mukhtar Auezov, Zhansugurov was the First President of the Writers' Union of Kazakhstan from 1934 to 1936.