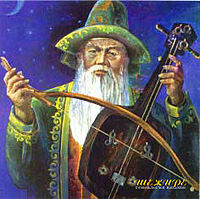 The great thinker of the Turkic peoples, the famous bard, storyteller, kobyzshy. Known as a historical figure, who left a rich literary and musical heritage.

Korkut or crust - the legendary Turkic-songwriter and composer of the IX century, a native of the steppes along the Syr Darya. Creator kobyz bard, storyteller, patron of poets and musicians. Legends about Korkyt found in Kipchak Turkic peoples (Kazakhs, Karakalpaks), and especially the southern Oguz branch: Turkmen, Azeris and Turks. They almost all common folk epic "Oguzname."

Legend has it that the crust from the youth could not come to terms with the transience of human life, so I decided to fight against the inevitable death. Tormented by his thoughts and driven by the dream of immortality, the crust moves away from the people, but everywhere he sees death: in the forest - rotten and fallen down tree tells him about her death and the inevitable end for the most Korkyt, in the desert - feather grass, the sun burning out tells him the same thing, even high mountains have told him about their pending destruction, consistently adding that the same end awaits Korkyt. Seeing and hearing all this, the crust in his solitary anguish hollowed out tree shirgay - the first kobyz pulled the strings and began to play it, pouring out his painful thoughts and feelings. He put his whole soul into these tunes, and the wonderful sound of his strings sounded for all the world came to the people captured and captivated them. Since then, the music he created and Korkyt kobyz go walk the earth, and the name Korkyt remain immortal in the strings kobyz and in the hearts of people.

"The Legend of Korkyt deeply optimistic sense of it is that the crust is found immortality in the service of humanity art created by him" (Valikhanov Ch Ch Collected Works. - Alma-Ata, 1961, Vol I).

The monument in the Memorial Korkyt ata Karmakshy near Kyzyl-Orda region of Kazakhstan, 1980

According to legend, at the request of the Korkyt, his grave was laid kobyz the soft sounds in the wind at all times.

A landmark in the form of kobyz after Korkyt-ata was built in 1980 in Kyzyl-Orda region Karmakchinskom region of Kazakhstan. Authors - B. Ybyraev architect and acoustician physicist S. Issatayev. When the wind blows it starts to sound much and passing all can hear the melody of wind. The monument can be seen from the windows of passing and immediately trains running from Moscow to Tashkent and Almaty.

In place of burial Korkyt on the banks of the river Syr about the X-XI centuries. mausoleum was erected "Korkyt-Tube", which means in common - Singin 'in the pipe. Over the centuries, it has come to destruction. In 1997 he carried out the restoration of the monument Korkyt. Created a whole architectural ensemble - a complex with amphitheater, hotel and other objects. And in 2000, when it was a museum.

In 2001, Kazakhstan established the Public Fund "skin" for the purpose of dissemination of knowledge in the community about the impact of culture of the nomadic Turks in world music.

Since 2006, the Ministry of Culture of the Republic of Kazakhstan and Akimat KyzylordaHotels hosts the International Festival "Music of Cork and the Great Steppe".

In 2008, in Astana, Kazakhstan broken Square and the monument is the composition "Korkyt kobyz."

Korkyt name called Kyzylorda State University, the airport "Korkyt-ata" in Kyzyl-Orda, the streets in the cities of Kazakhstan.