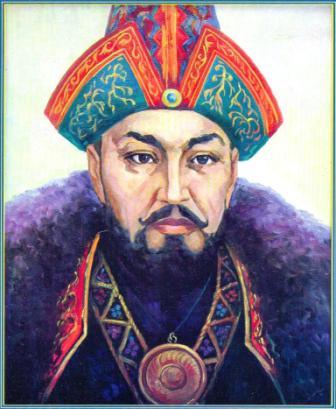 He was an outstanding statesman, brave military commander and visionary politician. Abylay was also known as talented kyuyshi who was deeply familiar with Kazakh folklore and loved it.

ABYLAY, Abilmansur (1711 (in Russian sources — 1713) — 23.05.1781) was an outstanding statesman, military commander and diplomat. He was a descendant of Zhangir Khan in the fifth generation.

Abylay grew brave, sharp and smart. From the early years he experienced difficulties. During the period named "Aktaban Shubyryndy" ("The Years of Great Disaster") he became an orphan and found shelter in house of Tole bi. The boy was responsible for grazing Tole bi’s camels.

According to Bukhar Zhyrau, Umbetey Zhyrau and others, Abylay became famous warrior in his youth. In battles with Dzungars, which took place in 1730-1740, Abylay earned the glory of batyr (warrior) through his destructive victories over Dzungar invaders. In one of the battles Abylay killed Sharysh, the son (in some sources — son-in-law) of Dzungar Khong Tayiji Galdan Tseren. After this victorious fight Abylay became Sultan of the Middle Zhuz. All people called him Abylay after his grandfather.

In August 1740 together with the Khan of the Middle Zhuz Abilmambet and 120 elders Abylay came to Orenburg and agreed to accept the sovereignty of Russia.

In 1741 Abylay was captured by Dzungars. According to historical sources, Tole bi and Abulkhair Khan submitted a request to administration of the city of Orenburg for the assistance in Abylay’s release. It happened on September 5, 1743. Russian embassy headed by K. Miller helped them to release Abylay from the captivity. Upon the Order of the Vice-Chancellor M. Vorontsov and the decision of the Foreign Association (1749) on behalf of the Tsarist Government, Abylay was given annual financial rewards and other assistance.

The new stage of strengthening the authority of Abylay (1744) coincided with the removal of Abilmambet-Khan to Turkestan.

In 1752 Kazakh army (approximately 15-20 thousand people) under the command of Abylay repelled the attack of Dzungars.

In December 1753, as a result of successful fight against Dzungars, Abylay freed significant part of Kazakh lands and captured 3 000 Kalmyks.

In 1754-1755 Kyrgyz army attacked some villages in Semirechye and defeated the units under the command of batyrs Zhaugash, Kokzhal Barak and Shynkozha near the rivers Aksu, Koksu and Chu. In response to it Abylay gathered a huge army, resisted Kyrgyz troops and thus liberated the territory between the rivers Ili and Chu from invaders.

In 1756 Kazakhs had two military campaigns against united forces of Chinese and Kalmyk armies under the leadership of Abylay. One battle was won in another they were defeated and Abylay was injured.

In 1757 Abylay’s army (up to 6 thousand people in total) successfully fought against Chinese troops consisting of 40 thousand soldiers. As a result, Chinese side asked for making peace.

After the next defeat of Kyrgyz army in 1764 Abylay established the border between Kazakh and Kyrgyz land from Narynkol to Korday which has survived till our time.

In 1756-1767 Abylay’s war against the ruler of Kokand Yerdenbek resulted in occupation of the cities Turkestan, Sayram, Shymkent. In addition the city of Tashkent was obliged to pay tribute to the Kazakh Khanate.

Abylay fought a long battle with Kalmyk army. In 1771 near the Moyynty River, during the bloody battles with Kalmyks, Abylay won another victory.

In 1771 Kalmyk army under the command of Ubashi and Galdan Tseren requested Abylay to make a peace and the opportunity to go through Kazakh lands towards Dzungaria. Not far from Lake Balkash at the military council gathered to discuss the suggestion of Kalmyks Abylay tried to convince the participants that there was no need to destruct the enemy. He put the idea of peace agreement with Kalmyks and suggested to approve their migration. At that period Kalmyk nation accounted 170-180 thousand people, including 40 thousand military men.

In 1771 Abilmambet passed away. According to established tradition, one of his brothers or his elder son Abilpeiz had the right to became next Khan of the Middle Zhuz. However, upon the wish of main sultans, elders and Abilpeiz, influential representatives of all three Zhuzes proclaimed Abylay Khan. Despite the official recognition of Abylay as the Khan of a whole Kazakh nation, Chinese Emperor, Dzungarian Khong Tayiji, Central Asian rulers and Russian Empress Catherine II treated him as a Khan on the Middle Zhuz only. The reason was that they were concerned about his increasing strength.

In 1772 Abylay swore its allegiance to the Russian Empire again. From the one hand, it gave him an opportunity to protect the South-Eastern borders of the Kazakh Khanate from future Chinese aggression. From the other hand, it enhanced him to have relations with Russia within the established legal frameworks.

Abylay paid much attention to consolidation of the Kazakh Khanate. He managed to unite Kazakh forces and make it a powerful military state. He coordinated his policy with the geopolitical position of the Kazakh Khanate which was situated between the two empires — Russian and China. Abylay didn’t break diplomatic relations with the Qing Empire and cleverly used any dispute between the Russian and Chinese Empires to achieve the goal of the Kazakh Khanate. As Abylay’s relations with Chine became stronger he began avoiding contacts with Russia. In 1779 he refused the invitation of the Tsarist administration to visit their country and adopt symbols of Khan’s power.

During the uprising of Yemelyan Pugachev Abylay attacked Russian fortresses with the army of 2 thousand people.

To expand diplomatic ties of the Kazakh Khanate Abylay developed negotiations with the ruler of Afghanistan Ahmad Shah Durrani and prepared diplomatic mission to Turkey.

Abylay was also known as talented kyuyshi who was deeply familiar with Kazakh folklore and loved it. He was the author of many kyuys.

Abylay spent his life in military campaigns and died near the Arys River in Southern Kazakhstan. He was buried in mausoleum-mosque of Khodja Ahmet Yassawi.

Abylay is remembers as outstanding statesman, talented military commander and visionary politician. One of streets in the city of Astana was named after him.

In 2013 the 300 anniversary of Abylay-Khan was celebrated in the city of Kokshetau.