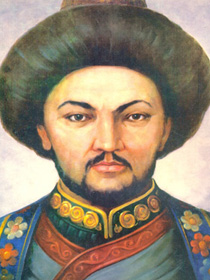 In 1715 after the death of Tauke Khan he sought to become the head of three Zhuzes. However, according to the views on succession, Tauke’s son Bolat was declared the Supreme Khan.

During military campaigns against Dzungar army Abulkhair proved that he was a talented military commander and organizer of national resistance against the enemy. Over a short period of time he had managed to obtain the support of strong and influential batyrs (warriors) of the Junior and Middle Zhuzes, including Bukenbay (died in 1741), Yeset and Zhanybek (died in 1751). He became the most trustworthy Khan in Kazakhstan.

During the Oirat-Kazakh war in 1723-1729 Abulkhair significantly expanded his political influence in the territory of Kazakhstan and strived for the leading role in military and political life of Kazakh tribes.

In 1726 at the national meeting in the place named Ordabasy Abulkhair was elected the leader of Kazakh militias. Abulkhair’s leadership potential revealed in victorious battles with Dzungars at the Bulanty River (1728) and in the Anyrakay area (1729).

In 1730-1731 Abulkhair’s actual social status in the Kazakh Zhuzes was equal to the title of the "Supreme Khan". According to the noble batyr and foreman of the Tabyn clan Bukenbay, "after the death of Tauke-Khan Abulkhair-Khan was a leader and did what he wasnted witout any obstacles".

In the late 1720s — early 1730s Abulkhair was the major and most significant political figure among other khans and sultans. Like his eminent predecessors, Abulkhair also faced traditional alternative to lose his real power obtained in bloody battles or to struggle in order to enhance it. As in the case of the other khans, including Kasym, Yesim, Tauke and Kaip, he decided to follow the second variant. In accordance with it, he undertook vibrant search of best ways and methods to enlarge his powers.

In 1726 and 1730, on behalf of elders of the Junior Zhuz, Abulkhair Khan requested the Russian Government to provide Kazakhs from the Junior Zhuz with citizenship and patronage.

In 1730 sent his embassies to Saint Petersburg to the Russian Empresses Anna Ioannovna (embassy of Kundagululy and embassy of Iutlymbet).

In October 1731 Abulkhair accepted the sovereignty of Russia.

Abulkhair was obliged to protect trade caravans, give military assistance to the Russian Government and pay the yasak (tribute) — the fur and skins. Instead he requested to build a fortress at the estuary of the Or River and secure his and his descendants’ right to hold the title of khan and protect him from attacks of Bashkirs, Kalmyks and Yaik Cossacks.

By means of the planned reforms Abulkhair supposed to create the state system which could provide the high level of manageability of nomadic population by the ruling monarch and ability of society to oppose the military aggression of strong neighbours effectively.

The Tsarist Government did not fulfil its obligations to the Kazakh Khan. Kazakhs didn’t obtain any military assistance from the Russian Government in their struggle against Dzungars. The city of Orenburg, constructed at the request of Abulkhair, became the centre of colonization of the Kazakh steppes used by the Tsarist administration. Cossack leaders considered that territory to be the Russian property and built there fortress and other military constructions without paying attention of the interests of indigenous population. The Tsarist Government usurped the right to appoint the supreme rulers — khans.

As a result of these actions, the traditional system of state governance was destroyed; groups of sultans strengthened the fight for the power. Russian subjects continued their attacks on Kazakh lands. Construction of fortified line in the territory of the Junior Zhuz became more active. All-Kazakh anti-Dzungar front broke up. Military threat from Dzungaria increased. In 1741 Dzungar units again attacked Kazakh lands.

In 1748 Abulkhair was killed by Sultan Barak.