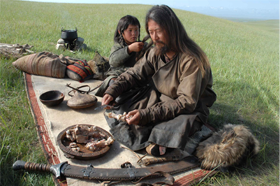 Economic decline and deepening of land crisis led to the Bokey Khanate’s establishment in 1801. In 1797, as a result of a fierce fighting Kazakhs regained the right to graze cattle.

Economic crisis and lack of land led to the establishment of so called Bokey, or Inner Horde according to its geographic location as it was established between deltas of the Ural and Volga rivers, in 1801. Till the end of the XVIII century this area was called Astrakhan Steppe. There were no permanent settlements of nomads, according to the season it was occupied by Kundrov and Astrakhan Tatars (Nogais), Kalmyks and Kazakhs. Some Cossacks’ settlements and peasant farm were located along the Ural River and along the coast. Since the end of the XVIII century the character, scale and motives of Kazakhs’s removal to the area between rivers had changed. If before horse herds of Sultan’s farms was driven for the winter, then after the suppression of Syrym Datuly’s rebellion the process of resettlement had become mass and incontrollable. In such situation the Government made a decision to promote the wishes of Kazakh nomadic auls. Ceding the territory which was almost inhabited after the flight of Kalmyks to Dzungaria in 1771 the Government planned to reduce the tension of the social fight in the Junior Juz which assumed anticolonial character. Such removal served the colonial interests of Tsarism as it disintegrated power of the Junior Juz, turned the part of Kazakhs into the subject if the Empire, in the similitude of Kalmyks and Bashkirs, as well as promised rise in taxes for Kazakhs and the development of trade relations.

One of the contemporaries of the events indicated that Sultan Bokey decided to remove to the inner side " in consequence of different friendly advices and hints from the Tsarist officials». Even his brother Shigay wrote about it: «in 1801 my late brother Bokey Nuraliev… was invited by the Astrakhan temporal Governor Knorring with the help of the Head of Astrakhan Cordon Popov to move to the inner side of the Ural River and become the constant Russian citizens. Khan Bokey did this with me and other our sultan-brothers and dependent Kazakhs with ten thousand of nomad tents and property».

In political sense this Horde as a special province was legalized only in 1812. That year at one time Sultan Shirgazy was appointed as a Khan in the Junior Juz while Sultan Bokey — in the Inner Horde. Shortly after the delimitation of his estate Khan Bokey died (1815). Till the legal adulthood of his eldest son Sultan Shigay managed the Horde. Zhangir was educated in the house of the Governor in Astrakhan. On July 24, 1924 in Uralsk in front of the highest officials of Boundary Administration of Orenburg Zhangir was declared to be a Khan.

The period of Zhangir’s government was relatively long and constructive in respect of reforms in the social life as well as full of the various events. For the first time in the history of Kazakh Khanates the lands were owned by nomads, becoming settled. He revived the institute of Tarkhans. These steps contributed to the decomposition of the nomadic society of Kazakhs. While enhancing his power Zhangir reformed the old system of taxes: before there was the «zyaket», then — «sotym» and finally «zhasauyl aky», which was the tax on servants’ salary.

Khan established the management body consisted of different functional subdivisions including chancellery, group of delegates, council of twelve biys, institute of yesauls, group of market sultans, Khan’s fourteen orderly men, the post of Akhun, the ecclesiastic of the Khanate, wase established in the Bokey Horde.

Substantial trade centers, one of the main of which was the Khan’s headquarter, appeared on the territory of the Khanate in 30-s. The volume of the trade turnover of the fair established in 1832 was more than one million rubles. Hundreds of thousands of cattle heads were moved to Russia, thousands of merchants from all areas came to the fair. The trade character of Khan’s headquarter can be indicated at least from the fact that among 89 houses 46 hosted shops and 19 had warehouses (1840-s).

Khan’s Horde hosted enough Muslim schools (mektebs) and almost each clan and each division of clan had their own mullah. Manu graduates of these schools were sent to madrasah of Bukhara and Tashkent to continue their education. The Khan’s educational concept was implemented in the first secular school not only in the Bokey Horde but in the whole Kazakhstan which was opened in 1841. The first enrollment in that school counted only 12 pupils on 30–40 vacancies. It took two years more to occupy these places. Yevreinov A. wrote that at the school children studied «Tatar, Arab and Russian languages, basic rules of Arithmetic and Grammatics, short course of Geography and History as well as the rules of Smallpox Vaccination… The best graduates enter the Orenburg Nepljuevski Corps». In his most interesting article «Kyrgyz’s notes about Kyrgyzs» (1861) Babajanov S. in details described the educational condition in the Bokey Horde. In particular it was written the following about the scholars of Nepljuevski Corps: «Khan Zhangir tried to improve the education of Horde’s people inside their territory and opened the only such source of that kind in Orenburg where, in accordance with the permission of the authorities, the Second Squadron, or the Asian Division, of established Nepljuevski Cadett Corps admits ten boys from our Horde».

The «weapons locker» occupies the special place among the remarkable events in cultural life of the Bokey Khanate. In opinion of contemporaries, it had a lot of unique exhibits demonstrated complete mastery of Kazakh craftsmen. A lot of items of Eastern origin including «Asian chain armours, helmets, elbow pads and other military armours» were kept in this first museum of Kazakhstan. Among other sabers there were those granted to his clan by the Russian Emperors. There are several versions about the destiny of the precious exhibits of this museum.

In his time Khan Zhangir was elected as a honorary member of scientific-historical society under the Kazan University. He wrote down some epic poems and shezhire of Kazakhs. Khan Zhangir died in 1845 and Khan Regime was not reestablished after him; the Horde was governed by the Provisional Council.