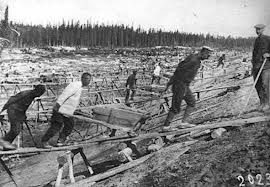 In emergency conditions of Great Patriotic War, the value and role of Kazakhstan in supplement of the army and people with agricultural products and industrial raw materials increased significantly. This was due to the temporary occupation of the German — fascist invaders fertile land area of 71 million hectares, i.e. about 40% of the total crop area of the country.

In republican historiography were emphasized that the first specific objectives for the restructuring of agriculture to the war term was contained in decisions of 5th plenum of the Central Committee of Communist Party (CC CP) (b) of Kazakhstan. In our opinion, it is not entirely correct, since the gradual transfer of the Soviet economy on the military regime began in 1939. In particular, only in the Kazakh SSR on June 22, 1941 was prepared 26,000 women tractor drivers, tractor drivers and men in accordance with the law on universal conscription recruited into the ranks of the Red Army, where he formed new mechanized camps and compounds [1].

Considering the military situation of 5th plenum of CC CP of Kazakhstan the Party, Soviet and Economic organizations were obliged to increase efficiency and accuracy in the management of agricultural production. Plenum demanded multiply crop, to fight for every kilo of bread for each ear for each grain. [2]

It should paid attention to the difficult conditions in which the restructuring of agriculture took place to the war. During 1941 — 1942 years the rural population decreased by 586,766 people. Major changes have occurred in the district management.

During 1941 — 1942 years the number of young staff 75% of secretaries of district party committees, chairmen of district executive committees, district chiefs, directors of MTS and state farms came to the leadership.

Moreover, the war has caused the diversion of funds and forces for defense of the country. During the first two years of the war fleet capacity has been reduced by 16.3%, and caterpillar tractors — 31%. Significantly were limited opportunities to provide agricultural machinery industry parts.

In this respect, we should agree with K. Aldazhumanovym who rightly pointed out that the management of large-scale socialist agriculture in the harsh conditions of the war is impossible without the maximum and efficient use of remaining in the rear of agricultural machinery and mobilization of relevant qualified personnel [3].
In our opinion, the Party and Soviet apparatus was able to organize collective and state farms to address military-economic problems on the mobilization of material resources in agriculture. Example of cohesion and organization of farmers showed agricultural cooperatives «Red Mountain Eagles» of Urdzharsky district of Semipalatinsk region, unanimously declared themselves as the fighters of rear of the army. They called upon all collective farmers republic become a military watch work «until the complete defeat and destruction of the enemy».

In order to fulfill its obligations on the farm «Red Mountain Eagles» established discipline appropriate wartime. In the administrative apparatus remained the minimum number of people. All the rest were transferred to the field work. Revising and strictly taking into account its internal reserves the people of Urdzharsky increased production rate by 20–25%. June 29, 1941 the Central Committee of Communist Party (b) of Kazakhstan approved treatment of farmers of agricultural cooperatives «Red Mountain Eagles» and instructed all collective and state farms and state enterprises urgently discuss it.

Party and government organizations through its decisions set a new schedule of the day, reviewing performance standards, restoring order in the accounting and calculating workdays. Serious consideration was given to the release of workers and the scope of the administrative apparatus.

In the book «Kazakhstan in the first year of World War II» reported that farmers of the farm named after Stalin in East — Kazakhstan region, by supporting the initiative of the people of Urdzharsky declared themselves mobilized and by strengthening labor discipline and increase working hours increased production rate of 30–50%, reduced the time of harvesting to 7 days in advance and executed plan of the bread supplement [4].

Also a serious role in addressing various issues of agricultural land owned by local authorities, the activities of which were directed by Narkozemom of the republic and the executive committees of regional and district councils.

Taking into account that the conditions of war, Kazakh SSR became the largest livestock base in the country, 5th Plenum of the CC CP (b) of Kazakhstan in order to maintain and increase livestock recommend collective and state farms to implement transhumance.

The event provided for the establishment of each collective and state farms amount of cattle to be distilled off, allocated them land for cattle breeders brigades statement of the number of advanced farmers, warm clothing and food.
Particular attention is given to the organization of livestock technique and veterinary care of cattle being distilled on distant-pasture content. Moreover, in order to stabilize livestock production farms have the right to produce accrual workdays collective farmers working on distant and a half rate.

At the same time in the republican press was criticized style of Semipalatinsk regional party committee, which «instead of increasing demands interested in creating staffs, triples and fives on various economic issues». Not surprisingly, the Belagachsky district party committee also created five on wintering cattle and «grazing management «headed by the Secretary of the District Committee Paršina, thereby committing themselves to concrete economic public bodies. [5]

In our opinion, these errors and mistakes are the result of the economic policy of the CPSU (b) and the CC CP of Kazakhstan, who were beyond criticism lower Party organizations.

Political department of MTS and state farms pay particular attention to the work of women. At planting time in 1942 in a number of collective and state farms Semipalatinsk and East Kazakhstan regions originated Institute women’s organizers.

Thus, in the extreme conditions of the initial period of war, collective and state farms of East Kazakhstan managed to restructure its work and to mobilize available resources for the implementation of plans of various types of agricultural supplies in quantities exceeding the prewar production level.