Women from Pavlodar in the Great Patriotic War 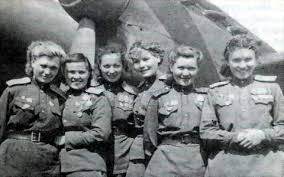 Participation of women in the war for last century, not only as nurse, but as a soldier with a gun became a reality. Especially mass phenomenon took place during the Great Patriotic War. Paying tribute to the veterans of the bloodiest wars of the 20th century for their selfless struggle and victory, for a peaceful life, provided for us. Our President Nursultan Nazarbayev rightly emphasizes that among the heroes of the war were the glorious daughter of the Kazakh people like Aliya Moldagulova, Manshuk Mametova and famous frontline aviatrix Hiuaz Dospanova. On this day together with us celebrate the anniversary of the Victory representatives of heroic generation of women veterans like Raisa Abdullina, Sheker Botahanova, Kantay Elyubaeva Lidia Abramova, Faina Burdin and many others [1].

Women were in factories, hospitals, transports and in the fields. Already in the first days of the war, they went to the front replaced their husbands and brothers, took over the production of military equipment supplied front not only military equipment, but also concentrates, bread outfit. Soviet women in the rear began fighting the army reserve. Working day lasted for 10 — 12 hours they did not know what the weekend is.

Certainly, war is not for woman. However, the threat to our country and the whole world in 1941 forced the Soviet women differently assess their capabilities in order to stand on an equal basis with men, replaced in the rear husbands, sons and brothers went to the front. Victory was forged in the rear. There were a lot of women, who loved their country and selflessly willing to give their life for it. They set an example of courage and heroism. Not every man is able to withstand the difficulties of the war, but women were.

About 800,000 women fought against the fascists. They served in various armies, the majority of them in hospitals (61% of nurses were female), in communication units (80%) and road forces (almost half of the composition).The female Aviation Regiment («Night Witches») became well known. Fought female snipers, female spies, female anti-aircraft gunners… But in armor there were not many. Large contribution to the fight against the invaders made women and girls working in the exploration of guerrilla groups. This was hard work associated with the incredible difficulties and daily risk to life.

The chronicle of war would not be completed if not mentioning about women’s participation in it of our countrywoman along with men who fought against fascism.

Deep patriotism of the generation that was raised on the heroic characters of the recent revolutionary past distinguished that 17–18 year-old girls, who precipitated military conscription to immediately send them to the front. This is what Shura Zhanuzakova wrote in a statement to military enlistment of Bayanaul: «I ask you to consider my request. I was born in 1922. A member of the Young Communist League in 1939, my major is sorter. At my own request, as Komsomol, I wish to join the ranks of the Red Army, please enroll me in the vanguard of the 8th Division of the Red Banner. I will perform all the tasks entrusted to me by the party and the government will staunchly defend their homeland favorite city Moscow and Lenin, November 27, 1941». Another from Galina Drozdova to the same military enlistment: «Comrade military commissar! When my homeland is in danger, when the enemy threatens Moscow, I like the Komsomol, expressed my desire to go to the front and I beg you to grant my request… I think that every girl could be among the Soviet squads. I have defense badges of State Protection Service and Antiaircraft Chemical Defense also can handle a weapon… Education classes 10, graduated in 1941, November 27, 1941 years» [2]. In the field of military enlistment offices received hundreds of such statements from the A. Alexander, v. Akhmetova, L. Weitz and many others.

From the first days of the war the desire to defend the county became the natural impulse of our countrywomen. 800,000 women served during the Great Patriotic Army and those who had the great desire to be in the front were even more. Not all of them have been at the forefront: there were support services, which needed to replace men who had gone to the front and service «women only», for example, bathing and laundry teams. Our consciousness calmly accepts female telephone operator, radio operator, signaler, doctor or nurse, cook or baker, driver and traffic controller — that is, those professions that are not associated with the need to kill. However, female pilot, sniper, shooter, submachine, anti-aircraft gunner, tank and cavalry, sailor and paratrooper this is something different. Cruel necessity pushed her to take this step, an instinctive desire to protect her land from the enemy, home, children. Sacred women’s right!

However, the phenomenon of woman’s participation in the war is complicated because of the nature of female psychology and hence the perception of its front-line reality.

«Women’s memory covers the mainland of human feelings on the war that usually escapes the attention of men, — says the author of the book» War has no woman’s face… «Svetlana Aleksievich. — If a man was catches by the war, as an action, the woman felt and bore it differently because of their feminine psychology: bombing, death and suffering for them it is not the whole war. Woman felt stronger the overloads of the war — physical and moral, it is hard to bear „male“ life war» [3].
In reality, what had to see, do and went through in the war for woman was monstrous contradiction of her female nature. By the nature woman inherited the function of continuation of the human race. Woman gives a life. Unnaturally seems the phrase the «female soldier».

Women began to be convened to the army from the first days of the war. They were doctors and nurses. There are many examples of heroic actions by women scientists and physicians, whose activities were full of courage, bravery and devotion to the country. They replenish not only frontline hospitals, but also fighting units. However, in order to get into the army girls had to go through the extensive training in specialized centers, where they prepared radio operators, snipers and scouts.

May 13, 1943, 33 girls from Pavlodar went to the front. It was the first call of large group women. After this more than one hundred of our countrywomen went to the front. The collection of the materials about girls’ fate in the war did not show any precedent act of cowardice or infringement of military oath. However, many facts that demonstrated incredible fortress of human spirit and fortitude in battle of our girls became obvious. They assisted with provision of first aid to the wounded and militated. They brought them from the battle field to the hospitals and treated. Also they destroyed officers and snipers, as well as penetrated to the enemy’s lines, organized sabotage and caught people from the enemies to obtain information [4]. In the second year of the war 1250 women were trained, 435 of them had learned nursing and medical corps, 43 as telegraphers and 13 as telephone operators. Overall during the war for military service and science were trained around a hundred thousand men and women [5].

In April 1943, at his post, saving the lives of wounded soldiers and officers died surgeon second of the second rank Mindzhamal Tumashova, who was native from Bayanaul. A nurse Nadezhda Starikova tells about how she worked in the hospital: «Doctor Tumashova was in the operating room and when it was necessary she protected patients with a gun in her hands. Patients with typhoid were brought from Kursk. The infectious department was headed by our Mina, it is how respectively we called her. During the day she worked in the office and at night operated on the wounded. «For saving the life of the wounded, of the sick, for the exemplary care and treatment, she was awarded with the medal «For Courage» and the Order of the Patriotic War II degree [6].

For services in the fight against the Nazi invaders during World War II, more than 150 million women have been awarded with military orders and medals. Many women from Pavlodar like Z. Yeremina, O.Molchanov, L. Rozanova, v. Ryleeva, Asya Yakovleva and others went through the glorious path in the Great Patriotic War.

Chronicles of women’s feat in the Great Patriotic War will be incomplete without saying about rear works. Manifestation of labor heroism has become the norm for women in wartime. It was one of the factors that lifted the economy at that time. Four long years of the war when the overall objective and main impetus of the huge country was victory, women who had been working in Pavlodar region like many others bore the heaviest burden, thousands of works and concerns. The war like a hammer demanded not only human resources, but also weapons, military equipment and ammunition. Huge army needed clothes, shoes and food. Women were the main force in factories and collective farms.

On July 7, 1941 was accepted the resolution of Council of People’s Commissars of the Kazakh SSR and Communist Party (Bolsheviks) of Kazakhstan «On preparing women for work on tractors, combines and cars», which refers to the feasibility of the establishment of the necessary reserve of women tractor drivers, truck drivers, combine operators and their assistants to replace men who were conscripted into the Red Army. In an article published in the newspaper «The Bolshevik path» from March 7, 1943, M. Zhanzakova writes: «Before the war I had no profession, was a housewife. And when the war began, I, along with other farmers enrolled in courses at Machine and Tractor Station. During the first year of work on the tractor STP (Stalingrad Tractor Plant) were developed up to 300 hectares in terms of soft plowing». In 1943, the 33 best tractor drivers of the area were given the awards [2, p.253 -254].

Furthermore, women were mainly mobilized to the labor army. For 1942 in the Pavlodar region were mobilized for logging in agriculture, industry and other works about 20,000 women.

In 1944, in memory of Manshuk Mametova’s heroism, by the initiative of the women of village council Tendik of Bajanaul area held fundraising campaign among women in the construction of a tank column named after the hero. Initiators of the movement wrote: «We have decided to start collecting funds for the construction of a tank column… It will be the best memory of the heroic Kazakh girl.

This will be the best contribution to the great cause of defeating the enemy. We have already collected 50,000 rubles, 10 thousand of which made wife of the war veteran Napiha Shegebaeva. We invite all women to follow our example… «In a short time among women the members of agricultural crew, workers and housewives were gathered 2 million 504 thousand rubles 40. In June, 1944 years from the army came a letter addressed to the initiators of the movement. In this letter was mentioned: «Tanks built on the collected funds were transferred to Rybalko colonel-general of tank troops. And now the tank column name aftrer Manshuk Mametova, the beginning of which was initiated by people and patriotism in the distant steppes of Kazakhstan, crushes hated enemy «[5, p.322].
We just announced the names of some women. The heroism of Soviet women was widespread. It is impossible to write about all women as the format of print media does not allow. However, those episodes of their military life, which mentioned here, are an example of patriotism, courage and great power that united the people of the country. In the harsh wartime women had shown an astounding courage, greatness and persistence of spirit, devotion, loyalty and love for the motherland. Their civil feat, great patience and sacrifice helped to survive and win.