Together - we are power 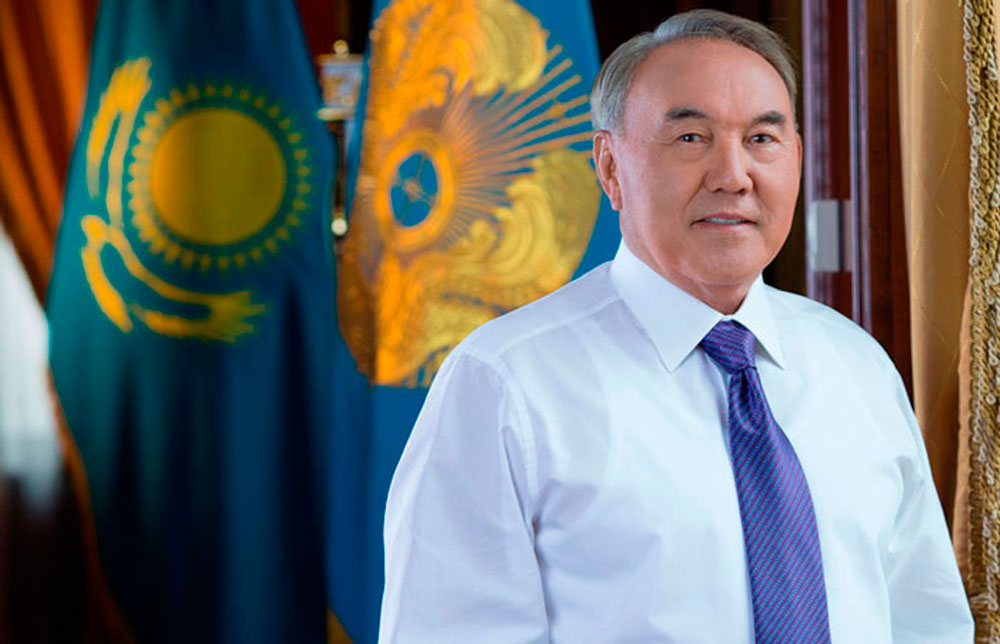 In the past – holding of the Asian Winter Games, the chairmanship in the OSCE, the opening of the Assembly of People of Kazakhstan, providing the opportunity to representatives of many nations of Kazakhstan to carry out the service in the state apparatus.

For all beginnings, continuation and success undoubtedly stands the President of the Republic of Kazakhstan Nursultan Abishevich Nazarbayev. His role in the development of the state and strengthening its position in the world is enormous.

He created around himself a strong team of like-minded people with a clear vision of the intended path. So-called "Nazarbayev model" developed, President Nursultan Nazarbayev was declared Leader of the Nation.

Nazarbayev’s model – the right way of the wise insightful leader.

It is a progressive path of development, focused on world powers including the west and south-east, the US, Germany, France, Japan, Singapore, Korea, Malaysia, while preserving national traditions, culture and language.

Proof of this are such things as close and more extensive cooperation with other countries in all areas without exception. In recent years, can be traced mass departures of citizens of Kazakhstan not only as tourists, but also for education abroad, for permanent residence. In turn, Kazakhstan recently published a number of countries for which a visa to the Republic of Kazakhstan is not required or possible for a certain period.

Leader - the very people elected person, the one who is followed on their own, the one in whose hands they trust their future. The reason for this society behavior lies in the comprehensive respect, trust, recognition of merit and talents of the Republic of Kazakhstan President Nursultan Nazarbayev.

Wise policy of Nazarbayev is noted outside the country, in the United States, Britain and other advanced countries of the world. And it's worth it, because foreign mass media, in general, critical in their statements, they are not devoid of sarcasm and irony. Although this approach of foreign language type of thinking, they noted the important role of the President, his limitless authority in the country and the world in general, the ability to maneuver in the chosen course of policy between such powers as Russia, China and the United States, while being in proximity with the first two countries mentioned above.

List the achievements of the President of the country can be very long, so for the appropriateness and clarity infographics below shows a brief information note. 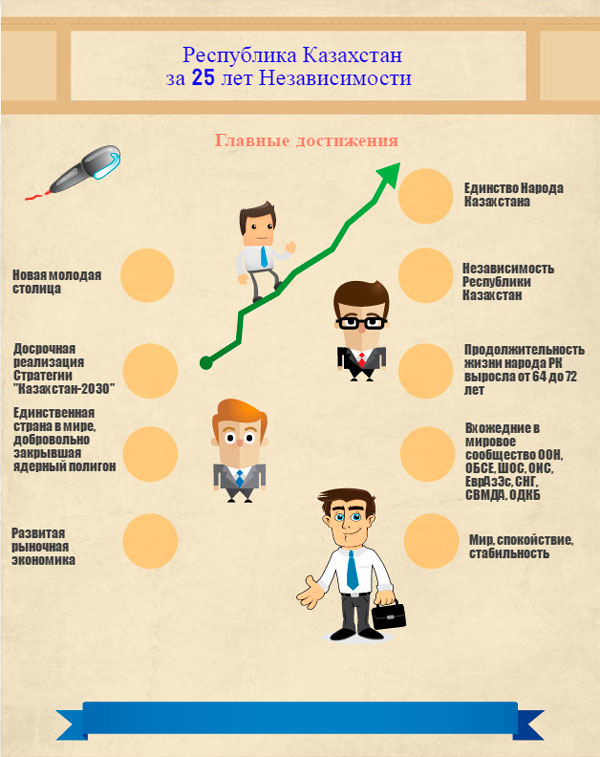 Kazakhstan People duration of life increased from 64 to 72 years

His strong family with wise Sarah Alpysovna and their adult children - suffering for their country's future, talented, tireless and persistent in achieving the goals in the first place for the good of the motherland, contributed to this a lot.

At present, special attention is paid to security and sustainable development in all directions taking into account the national heritage, recovery from the global economic crisis and the increase of welfare of the citizens.

Kazakh statehood is strengthened of moderate and at the same time steady pace. The Republic of Kazakhstan is recognized worldwide.

In the light of past events Kazakhstan declared itself as a worthy participant in the Olympics, Paralympics, in film and music, in the field of scientific discoveries and research.

For a long time, Kazakhstan attracts the world's attention from the perspective of the rich oil resources, abundance of natural resources, its geopolitical position in the heart of Eurasia, in focus of Central Asia, on the vicissitudes of the east and west, at the intersection of Europe and Asia, an international educational program "Bolashak".

Honored to be observers and partly participants of the formation, foundation and development of the country. During the years of independence, it had its drawbacks, mistakes, excesses, without which any development was not possible. A development process of a person, and of any living organism, which can be called the government of Kazakhstan, goes through trial and error.

In general, the development process is soft, flexible, of positive character.

State management and the introduction of innovations is held if not without rough edges, then at least in a peaceful way, which is not true, for example, in the Middle East countries.

This fact makes us happy, we want to see stability and gradual development taking into account the experimental area in our young but mature republic. It is not for nothing inherent in the tradition of celebrating the Kazakhs mushel zhas after a 12-year cycle. Interpretation of the age of 25 years is that, in 25 years - a person is young, but mature and ready to be fully responsible for each step, a transition to a more conscious age, when years and experience added awareness of the traversed path and goals. Also, do not forget about the dangers that may be encountered on the way in the form of disease and other negative factors, so decided to give most favorite things.

Regarding our country, we can draw a parallel with the real man - Kazakhstan also gives other countries the opportunity to visit the capital in a festive atmosphere and witness the holding of the international exhibition EXPO-2017 on actual today topic "Future Energy".