The story of one photo. Abduvali Ismailov 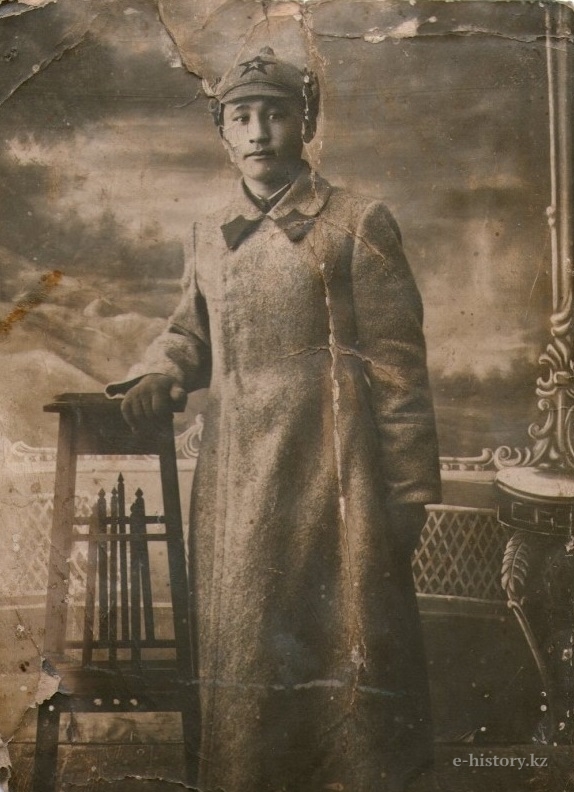 The most terrifying word in the world is "war". Any war leads to tears, sorrow, death and loss. The war which began in 1941 was exactly the same.

Every Soviet soldier, fought in the battlefield, knew that war started not for sake of glory, but for peace in the world. Thanks to self-sacrificing feat of the Soviet soldier, we, children of 21st century, live in the free country.

In our country there is no one single family, which was not affected by the war. My great grandfather was on the front of Great Patriotic War. I found out about this from my parents who carefully keep all documents and photo in family archive. My great grandfather Abduvali Ismailov was born in 1911 in the family of poor peasant in Akmolinsky area in the village Kyzylzhar near Astana. Childhood and youth he spent in very severe conditions. In difficult period 1931–1932 he lost his parents. And as he was eldest in the family rising was on him. Despite difficulties, he finished 6 classes of Kazakh school, and then entered to pedagogical college in Semey. 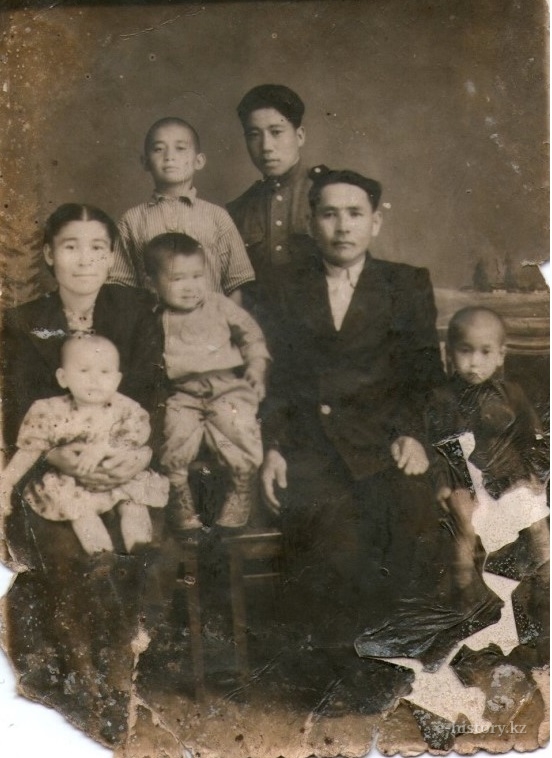 He began his work since 1932. At first Abduvali Ismailov worked as the secretary of the Kurgaldzhunsky fish plant. Later he was conscripted to the fronts of Red Army where he served from 1933 to 1936. After army he was executive officer of Akmolinsky District, from 1937 to 1939 her worked at newspaper "Na relsah Karagandy" of Akmolinsk political department. Later before the war he held a position of the deputy editor of this newspaper. 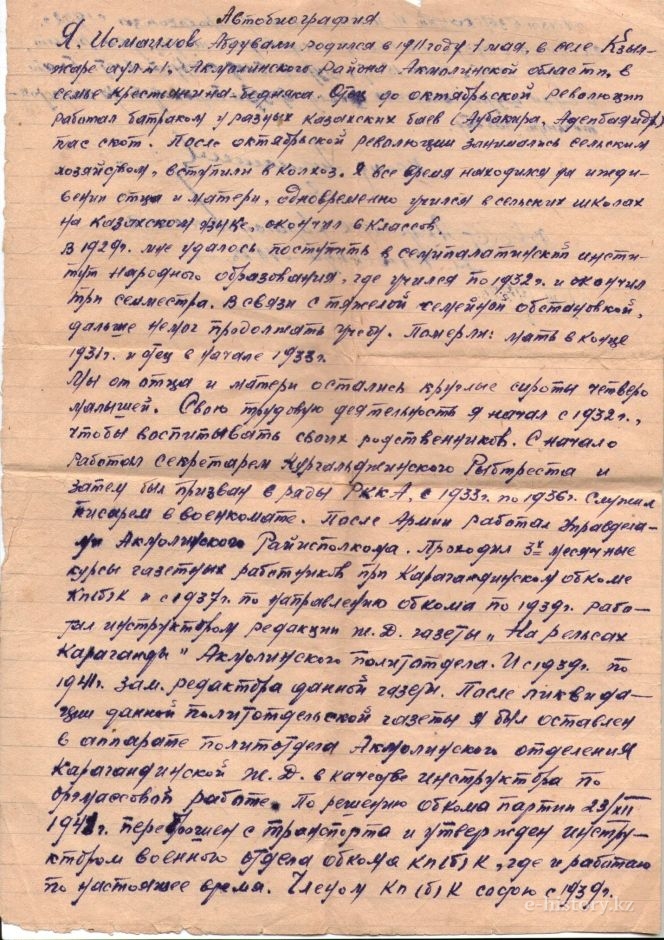 According to the track record, the young man had a good career perspective. It’s seems that everything was fine and there was a chance to think about future, children and relatives, but the war destroyed all plans and hopes for the future.

My great grandfather was 30 years old when the war began. At that time he was married and had two kids also brothers and sisters, for whom he was father and mother.

Did they know that it might be last time that they might see? Perhaps, they assumed, but always believed, waited and hoped for the best. He sent one letter on May 18, 1942, which has been kept till this day. In letter he wrote that till destination, Kalinin area near Smolensk, they walked a month. Also he asked to take care of children and hopes to see everyone. According to stories of adults I understood that my great grandfather was in the front during the most difficult times when the Soviet army suffered a defeat. 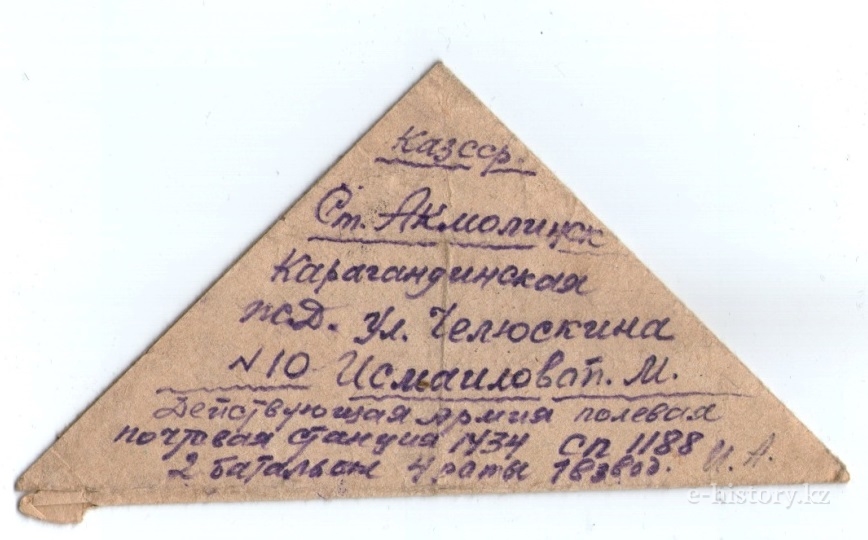 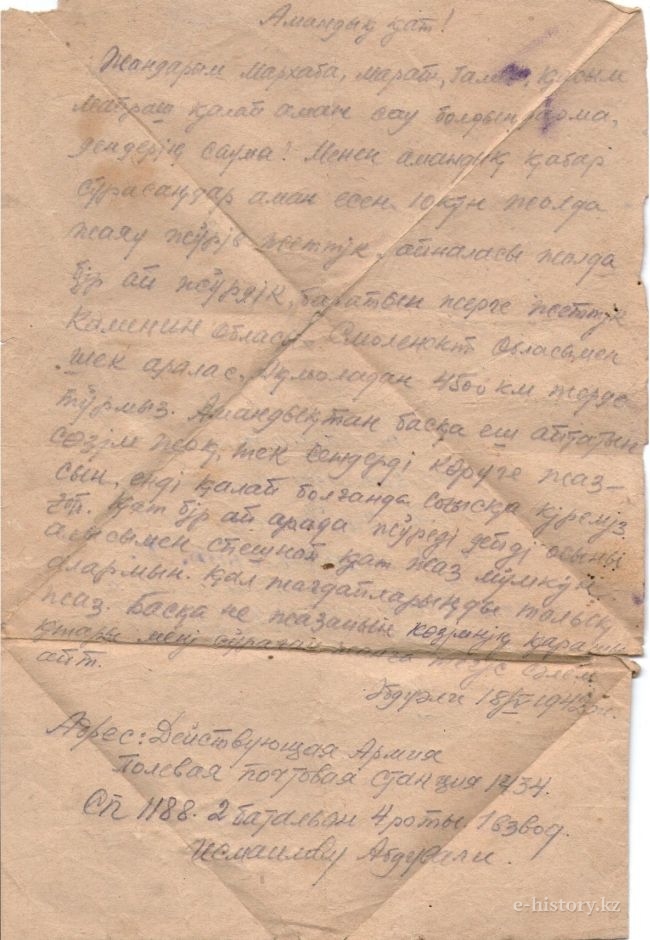 In the back it was waited by a family, the great-grandmother didn’t manage to tell that expects a baby, my grandfather Ismailova Galya who was born in 1942 on December 10. How many still was untold, but war placed everything on the, having left behind only the bleeding wounds in memory.

At home his family was waiting for him, and great grandmother was able to say that she was pregnant my grandfather Gali Ismailov, who was born in On December 10, 1942.

70 years passed since end of the Great Patriotic War, but in the memory of our grandparents’ memory still alive. I am proud that I had such great grandfather, who together with Soviet soldier was at war. And despite that he did not get till the end, he won the terrible war, giving the chance to us to live in peace.

Pupil of 6th grade of gymnasium No. 30
Astana