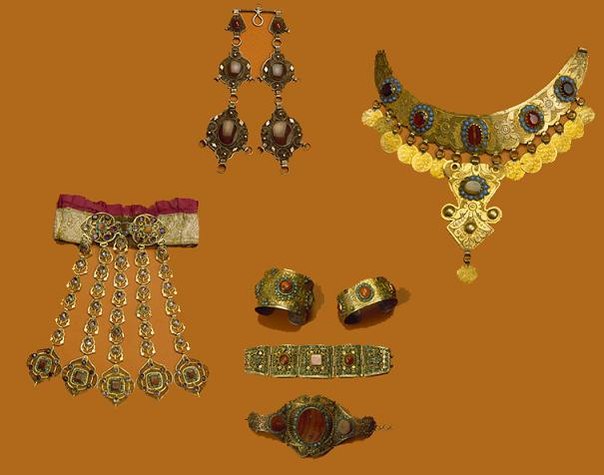 In comparison with other types of Kazakh applied art having the character of home works, jewelry was professional, which was preconditioned with the specificity of production.
In the history of Kazakh national culture jewelry art takes a special place, developed on the base of ancient traditions interacting with cultures of adjacent people. Kazakh jewelers — zergers («zer-zar» from Persian «gold») mostly worked alone, their skills were inherited. The master had a certain set of instruments: hammers (balga), jaws (iskenzhe), rasp files (egeu), scissors (kaishy), drill-machine (burgy), awl (biz), iron rectangular plate for stretching the silver wire (tesim temir), etc. Zerger also had a set of forms kalyp. Forms for producing earrings and other female jewelry differed with a special variety. There were forms according to which the bracelets were forged.
A number of items made by a zerger was huge; here were womanish jewelry, details for the costume, personal care items, cutlery, buckles for the design of a wooden carcass of the yurta, furniture, wooden and leather dishes, musical instruments, weapon, horse equipment.
As the material was used gold and more often silver. Zergers could delicately reveal beauty of the metal. In skillful hands silver shined differently, it was conceived alive. Jewelers furnished their items with precious stones (rubies, saphires, emeralds, diamonds, turquoise), also cornelian, agate, pearl, coral, nacre.
Among people there was a saying: «If a man does not know the crafts there will not be any use».
The craft of blacksmiths and jewelers was extremely honorable, and the smithery, especially, anvil were considered sacral. Women and girls do not have to enter the smithery or take any things out from there. Insane people were left to stay for night in the smithery as if for «healing».
The main production of zergers were womanish jewelry decorations being in a high demand not only because of natural aesthetic qualities , but also because of a number of functional meanings, connected with traditions, the whole idea-religious complex. Jewelry decorations were traditionally integral part of the national costume and accompanied a woman all her life.
Thus, a girl was put on during the first days after the birth considering that they fulfill the defending function. The amulet defending a child from an «evil eye» were also supposed to be the simplest bracelets made out of many-colored or entire precious beads with white spots. The decorations of boys and girls mainly were similar and differences in their set and look became obvious only from 5 years. With the age the set of decorations gradually increased.
Especially multiple and various were decorations for girls of 9-12 years old, when they were considered brides. The most numerous and complicated was the set of wedding decorations, which was worn till the birth of the first child.
Love for decorations was explained with a number of reasons. The first in the life of children decorations of both boys and girls serving the amulets did not simply turn aside the evil eye, but also played the role of amulets saving the life to a child. Each family wanted to have beautiful amulets, because the mortality of children was a mass disaster, and to have an extended breed was considered acceptable before Allah, and children were superstitiously saved.
When a girl became a bride, and then a young woman, her decorations were not only amulets (although they kept their own meaning), but also virtuous symbols, specifically expressing the ideas of fertility. Young girls and women paid a special attention to worn on the head and breast decorations saving the head and breast. 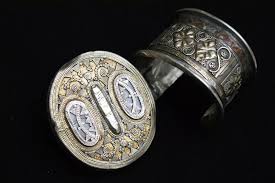 Materials on theme
Special Project -_-My father... My mother...#2 with Elena Klepikova
Combat headgear of ancient and medieval nomads of Kazakhstan
Cultural Walk: House and Museum of Sabit Mukanov
The National Museum of the Republic of Kazakhstan: keeping up with the times