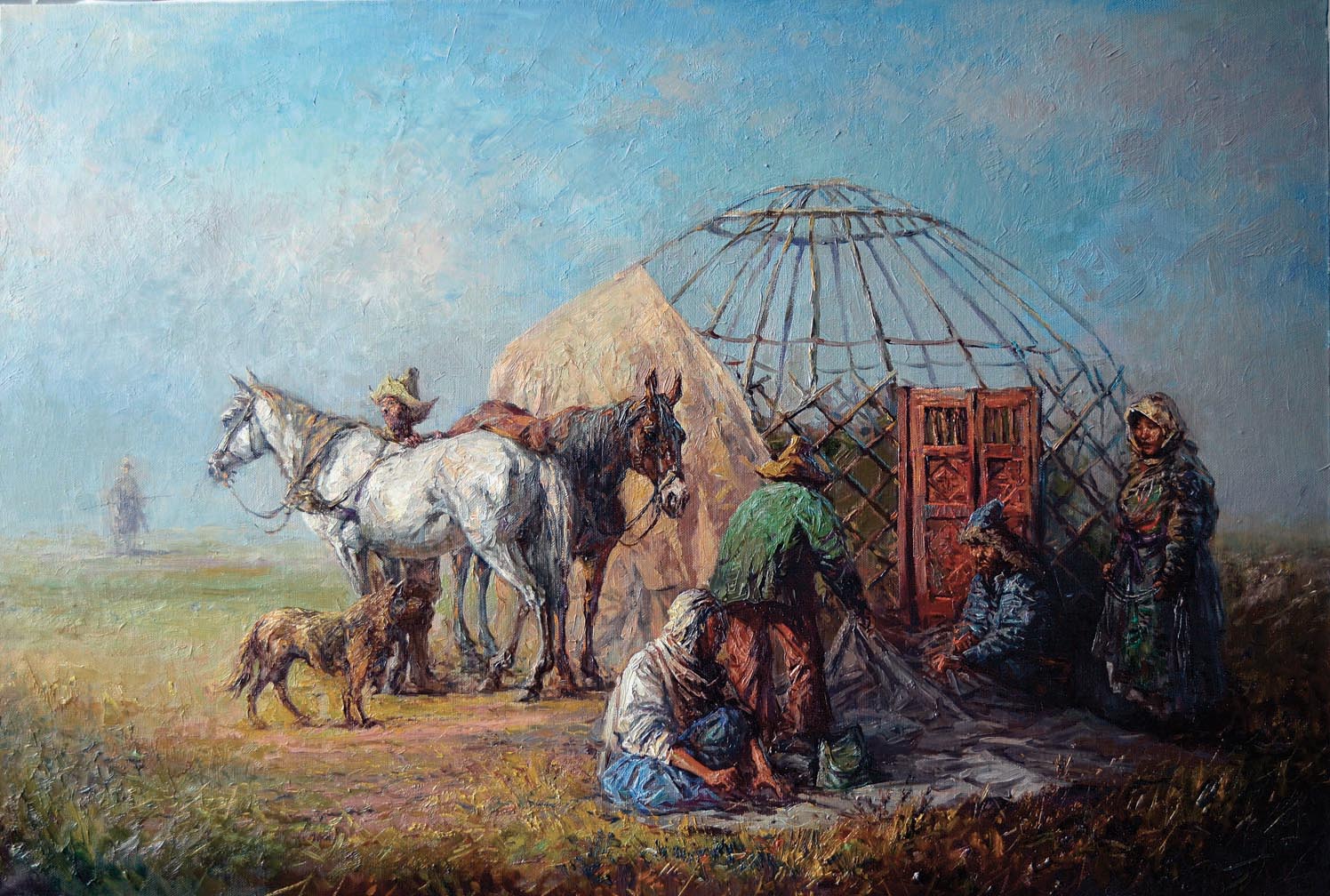 The most part of a nomad’s life passed in his microcosm – in a yurt. It was a measure of art and prosperity of its owner.

The Kazakhs are ancient nomadic people. Their ancestors, the blue Turks, taming wild horses, started to nomadize along the great territory — from the Altai Mountains to the shores of the Caspian and Black Sea, from the West Siberian plain and the Ural Mountains to the northern spur of the Tien-Shan. Then they invented metal stirrups and a cartwheel.

And they have been nomadizing all life long, like migrating birds. In autumn birds fly to the south — and kosh (the nomadic aul) moves following them. That is why the Kazakh believe that their distant ancestors are wild geese and swans and the Milky Way covered with stars is called as Kus Zholy- the Bird’s Road.

The Kazakhs nomadized mostly in meridional direction and they went to the southern slopes of mountains every spring — closer to the sun, the first grass. They spent summer on green Alpine meadows and in autumn, with the first frosts, they moved from summer pastures towards the heat — to the south-to semi-deserts, where no strong snow blizzards can be.

In ancient times, the Kazakhs had a quite clear system of tribal land tenure and use, based on the clinical natural processes. At that, each clan had its own strictly defined migration routes and other clans had no right to infringe on them.

Immense steppes with various fauna gave great opportunities for individual and collective hunting to the Kazakhs. Authors, who knew this country well, noted that nomads «are perfectly able to hunt, mainly with bows». Saigas, gazelles and kulans were the objects of the hunting.

There were several types of hunting: with hunting birds, greyhounds, bullpens and others. Hawks, golden eagles, gyrfalcons, falcons-balobans were used as hunting birds. Hunting with hunting birds was very popular in Kazakhstan and existed up to the early XX century. Today this kind of hunting is often practiced as a demonstration of the ancient ceremony for tourists. Berkutchi — hunters-professionals, transmit traditions of their skills to the younger generations. Berkutchi hunt a wolf or a fox. By tradition, there should be three totemic things in each Kazakh house —owl feathers, dombyra and a skin of a wolf. The latter — because, according to legends, the Turks are coming from the union of a wolf and a man. Having tracked down a wolf, a golden eagle rapidly fell from the heights, fearlessly rushed on a wolf and beat it in tender spots. Then a hunter came to the aid of his sharp-sighted companion. 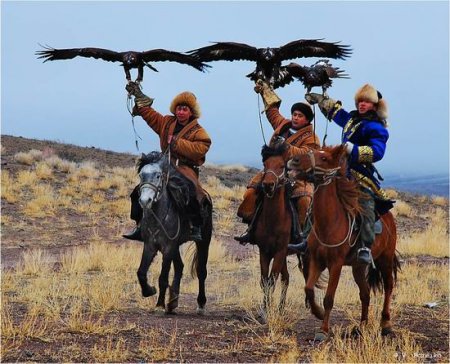 Traditional lifestyle of the Kazakhs, patriarchal and patrimonial relations have predetermined character, form and content of the Kazakh culture and today we can observe many features of it as well. People’s ideas about an origin of domestic animals formed a basis of numerous legends, according to which a quick and easy horse was weaved out of the wind, a sheep — out of the sky and fire, a mountain goat — out of a stone.

The Kazakhs believed that all domestic animals, as well as all living things, have their guardians. Some relics of the cult of nature have survived up to nowadays: modern Kazakhs revere mountains and peaks, lakes and rivers. Even a lonely tree growing in a steppe can be an object of worship. Therefore, the traveler, who has met such a tree, binds a piece of his clothing to its branches, hoping that all his secret desires come true.

The whole life of a nomad was filled with folk customs, ceremonies and holidays. As well as in all countries where Islam was popular, the Kazakhs used to celebrate two annual religious holidays — Eid al-Ait (the end of fasting) and in 70 days — Kurban Ait (sacrifice). At this time monetary and other gifts to mosques, holy persons and places were usual.

Nauryz has played an important role in the life of the Kazakh people since ancient times, it was always considered as a holiday of revival and awakening of nature. Kazakh people believed: more generously Nauryz was celebrated, the better year would be. There from an abundance of holiday traditions and attributes come.

Milestones of a nomad’s life were celebrated during family holidays. Ceremonies, connected with a birth of a child (shildekhana), putting him in a cradle (besik toi), the fortieth day since baby’s birth (kyrkynan shygaru) and with a Muslim ritual of berith of boys aged from three to ten (sundet toi) were of especially solemn character.

The most part of a nomad’s life passed in his microcosm — in a yurt. It was a measure of art and prosperity of its owner. The person, who has entered into a yurt, got into an ornament world: each thing, along with its functional value had features shown in arts and crafts design, spirituality.

Names of many skilled workers, who created beautiful things, were lost in centuries. But house ware saved in museums abs as family relics, indicate how great the skill of ancestors of modern Kazakhs was.

The national clothes of the Kazakhs were also original. Fell, skin and wool of domestic animals were the most ancient materials for clothes manufacturing. A sheepskin was basically used, rarer — skin of goats and foals. Poor people wore clothes from skins of saigas, headdresses from fur of a fox, an otter and other fur animals. Use of naturally felted winter wool of sheep and camels was one of the most ancient forms of material manufacturing. Wool was thoroughly cleaned, laid out on a lining, quilted with longitudinal seams and parts of winter clothes were cut out from it. Wool was also processed into felt, which was used for footwear and headdresses manufacturing.

Imported cotton, silk and wool fabrics were used by nomads since ancient times. Until XVIII century fabric was delivered to the Kazakh steppes basically from East Turkestan and the Central Asian khanates. Chinese fabrics were very popular; they were delivered to the territory of Kazakhstan in the form of gifts, spoils of war, as exchange for products of a nomadic farming. In XVIII century, Russian ambassadors brought fabrics as gifts to sultans and khans. In the second half of XVIII century Russian trade with the Kazakhs and people of Central Asia became permanent. The foreground of Russian export was cotton fabrics, leaving other goods (bread, skin, cloth, metal products) far behind.

Sunday outerwear of the Kazakhs differed by material mostly: dressing gowns were sewed from fabric, raincoats —from homemade cloth and felt, winter clothes — from fur.

Use of materials for publication, commercial use, or distribution requires written or oral permission from the Board of Editors or the author. Hyperlink to Qazaqstan tarihy portal is necessary. All rights reserved by the Law RK “On author’s rights and related rights”. To request authorization email to mail@e-history.kz or call to 8 (7172) 57 60 13 (in - 1163)
Қазақша Русский English
MOST READ
Month Year
The referendum on the Constitution is a significant stage of democratization
Philosophy of the Emblem
The rural akims: the country's hope is in the elections
Kazakh historical drama Tomiris premiered in Istanbul
Stolypin about the worries and hopes of immigrants to the Kazakh steppes
ALASH IDEA IS THE PROTECTION OF KAZAKH STATEHOOD
A tireless explorer of the Kazakh land
SWITCHING TO THE LATIN ALPHABET – UNITE ALL KAZAKH PEOPLE
Kunaev Dinmukhamed Akhmedovich
People who eat horses will kill you
Kazakhstan's participation in the Winter Olympics has a long history
Rebooting a field of science and education
Recorded history of Kazakhstan. Part 1
Materials on theme
Years of repression: special report from Karlag
Veterans of the Department of Internal Affairs congratulate the young officers on their professional holiday
Celebration of the 550th anniversary of the Kazakh khanate is primarily the revelation of history as “thing in itself ”
The Conference "Alash Orda: The Origins of Kazakh statehood and modernity"