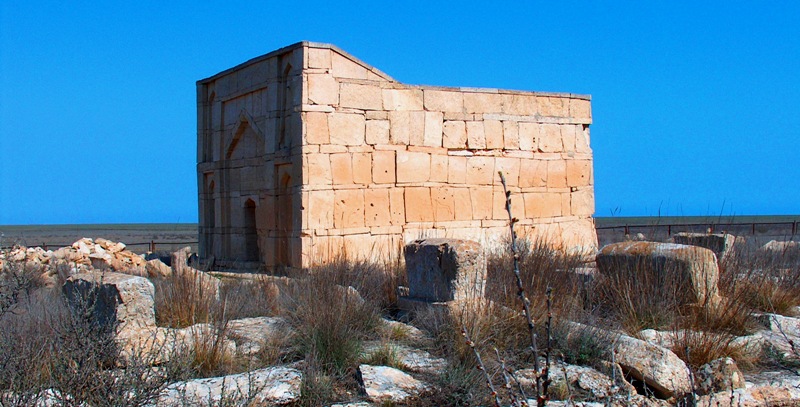 There are memorial monuments of XV-XX centuries on the territory of the necropolis Kenty-Baba.

Surrounded by a low metal fence, the necropolis includes a restored mausoleum of the «tower» type, with a square base and tapering walls, rising to a circular hole in a place of a roof. Around the tomb inside are piled horns of arkhars, brought here perhaps by hunters wishing for a benediction for successful hunting, and a fire stone, or shiraktas, blackened with soot, on which sheep’s fat is burned by the faithful during visits to the place. Another, again roofless, mausoleum on the site has a square base and walls of large, flat slabs, on which are incised a gallery of figures. There are horses, swords, camels, hands, a rifle and even a cross. The necropolis also contains many koytases, often decorated with an engraving of a sword.

Take the track passing behind Kenty-Baba, leaving the necropolis to the right. After a few hundred meters you arrive at the necropolis of Sultan Epe. A large oval-shaped enclosure made by a dry-stone wall, enclosing a funerary structure comprising more stones is said to mark the grave of Sutlan Epe, patron of sailors and some of his followers. The necropolis is particularly rich in examples of the sarcophagus-like sandyktas, often with a koytas resting on the top. Some of these sandyktas have pictures of weapons etched on the flat stones which make up their walls.

Just beyond the necropolis, on the side of a rocky canyon is the entrance to a subterranean complex identified in a plaque as the underground mosque of Sultan Epe, dating from between the 9th and 12th centuries.

Sultan-Epe — saint, protector of seafarers. According to the legend, many years ago, the father summoned his sons. They all appeared before the father, only the younger son did not come to the call immediately, but after a few days. The father was angry with his son. Then Sultan-Epe told that he was on the Caspian Sea, where he helped fishermen in trouble, and showed his back, covered with marks of the rope. Since then, he always comes to help those who are in trouble at sea.

The complex comprises a series of small rooms, connected by low passages. A visit here requires a great deal of stooping. The rooms are rectangular in plan, lit and aired from openings in the rood formed by concentric layers of stones. The latter is the only evidence of the presence of the complex from the surface, where they form little pink piles of stones. The ceiling is propped up by circular columns, only a couple of which are original. With none of the rooms obviously more prominent than the others, some researchers have questioned whether the complex was initially built as a mosque at all.

Use of materials for publication, commercial use, or distribution requires written or oral permission from the Board of Editors or the author. Hyperlink to Qazaqstan tarihy portal is necessary. All rights reserved by the Law RK “On author’s rights and related rights”. To request authorization email to mail@e-history.kz or call to 8 (7172) 57 60 13 (in - 1163)
Қазақша Русский English
MOST READ
Month Year
From the story of a blood feud
A role of Buddhism in formation of Central Asian mythologies
Kazakh historical drama Tomiris premiered in Istanbul
ALASH IDEA IS THE PROTECTION OF KAZAKH STATEHOOD
Stolypin about the worries and hopes of immigrants to the Kazakh steppes
A tireless explorer of the Kazakh land
SWITCHING TO THE LATIN ALPHABET – UNITE ALL KAZAKH PEOPLE
Kunaev Dinmukhamed Akhmedovich
People who eat horses will kill you
Kazakhstan's participation in the Winter Olympics has a long history
Rebooting a field of science and education
Recorded history of Kazakhstan. Part 1
Historical Dates on the Bosphorus
Recorded history of Kazakhstan. Part 2
Materials on theme
People called her “Domalak ana”
Museum of the first President of the Republic of Kazakhstan
Zhumabek Tashenev. An example of selfless service to the homeland
The third convocation and multi-party election (2004-2007)