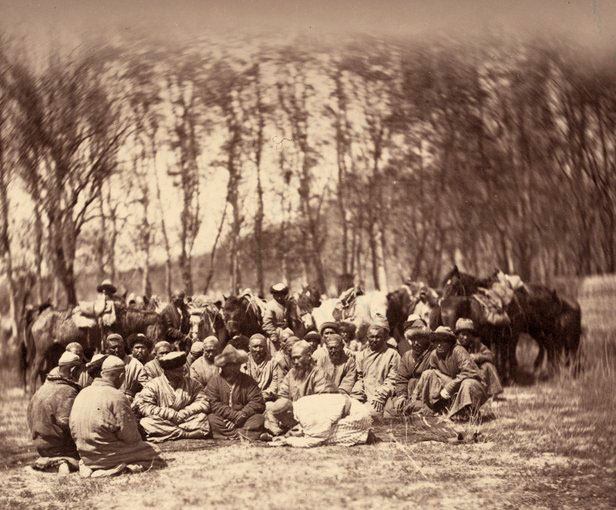 One of the very interesting customs is the friendship between coevals.
Family relations among Kazakhs concerned not only blood relatives, and those till the seventh generation (by the way, it was extremely important not to create intimate relations, that is, to form new families till the seventh “knee” as the consequences could be deplorable), but also friends and those whose date of birth was alike. There were certain traditions of calling and treating the latter people.

One of the very interesting customs is the friendship between coevals (kurdas).

People born in the same year, i.e. coevals should be very friendly to each other. According to Kazakh national traditions they love to play jokes on each other, even behind their backs.

In the oral folklore the jokes and funny tricks of the coevals are often retold and long communicated.

Among Kazakhs there was a very spread tradition of blood brother – tamyr (root).

Such different people were friends regardless of age and circumstances. They found each other in various situations. Usually, people, who became friends once, were kissing a saber or a dagger and in front of witnesses were giving an oath: “From now on let only death separate us”. Nobody, with rare exceptions, ever broke that tamyr, never offended each other; they were always first to come with help, sharing hardships and joy. Faithful friendship of the two tamyrs could also be strengthened by the marriage or friendship of their children.

Hence, in the eighth generation from male and female’s sides any real family relations lost their meanings forever.

Therefore, all the family relations between Kazakhs lasted till the seventh generation, and only then there were peculiar relations.

So, from the time immemorial there were family relations and also relations turning up as a result of matchmaking and marriages. Traditional support of each other in different situations was the basis of their lives, and every generation not only followed them sacredly but also carried them out.

Use of materials for publication, commercial use, or distribution requires written or oral permission from the Board of Editors or the author. Hyperlink to Qazaqstan tarihy portal is necessary. All rights reserved by the Law RK “On author’s rights and related rights”. To request authorization email to mail@e-history.kz or call to 8 (7172) 57 60 13 (in - 1163)
Қазақша Русский English
MOST READ
Month Year
Kazakh historical drama Tomiris premiered in Istanbul
ALASH IDEA IS THE PROTECTION OF KAZAKH STATEHOOD
Stolypin about the worries and hopes of immigrants to the Kazakh steppes
A tireless explorer of the Kazakh land
SWITCHING TO THE LATIN ALPHABET – UNITE ALL KAZAKH PEOPLE
Kunaev Dinmukhamed Akhmedovich
People who eat horses will kill you
Kazakhstan's participation in the Winter Olympics has a long history
Rebooting a field of science and education
Recorded history of Kazakhstan. Part 1
Historical Dates on the Bosphorus
Recorded history of Kazakhstan. Part 2
Materials on theme
Political activities of Urus Khan and his place in the history of the Kazakh statehood
The third convocation and multi-party election (2004-2007)
The history of the orchestra group "Otrar sazy"
Archaeological Park will be created on the site of the ancient city of Taraz