Kazakh hospitality: at the dastarkhan 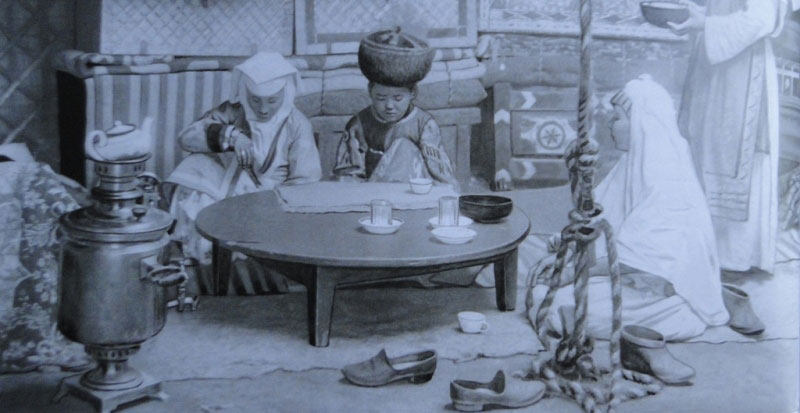 There was a special way of guests treatment during the meal time.
Kazakhs always received everybody with dignity, whatever guest turned out to be. According to the tradition, the most respectable guest was seated on the most honorary place, to his left and right sat others, also very respectable people. The late guests were also received with dignity; the younger people moved and gave their way and place to the arriving guests.
Then the refreshments time came.
At first a guest was treated with kumys (horse milk), shubat (camel milk) or airan (curdled milk), then tea with milk or cream, baursaks, raisins, kurt (dried curd) and irimshik (dried pieces of cheese). The adornment of the dastarkhan and the most favorite dish among Kazakhs was always beshbarmak. 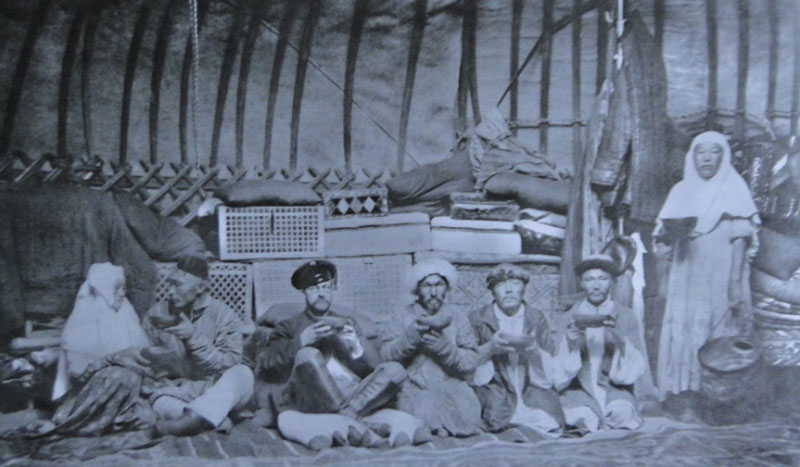 A young girl poured tea, as she had to know all the refinements of hospitality being responsible for the treatment at home in near future. The guests were admiring her skills, and the news was quickly spread to other auls. And that could not help attracting attention of the potential grooms.
The way the tea was poured was different everywhere. For example, in most regions of the Central Kazakhstan tea was poured into the cup (piala) almost till the brim, so that the guest was pleased, but in the south — only 2-3 sips, so that in hot weather it could get cold quicker. Not all the guests deserved the honor when a sheep or a horse was killed for them. There existed certain rules for that.
For the specially invited guests, whose number did not exceed ten people, only one fat marka (young ewe) was killed, more than 20 people — two big sheep, for more than 30 people — one foal.
In winter they were cooking usually horsemeat — sybaga (portion), that was prepared for the respectable guests and the guest was pleased.
After the meal was over the guests were thanking the hosts and telling only good wishes to the host and his family.
To cheer up the guests the hosts (especially young people) started singing songs, playing dombra, and then gave possibility to the guests to respond. Thus, the tradition of hospitality contributed to the communication between people, strengthened good and kind relations with relatives, neighbors, brought up respect to the elderly people, taught young people to collectivism.
All this had big cognitive and educational meaning.
Nowadays, the feasts changed their forms, but they did not lose their ancient hospitality laws. On the contrary, their borders widened: at today’s dastarkhans gather not only Kazakh people, but numerous guests residing in our big multinational republic: Russians, Ukrainians, Tartars, Uzbeks, Germans, Uigurs, Dungans, Koreans and others.
Having lived close to Kazakhs for more than one decade, sharing grief, bread and joy, these fraternal nations could not help influencing the way of life and culture of the Kazakh people, and taking over the best traditions from its centuries-old culture and life instead.
Used materials:
Dzhelbudin E.T. Traditions and customs of Kazakhs. Adet-Guryp.
Photos:
Alexnader Petrov,
http://www.silkadv.com/
Use of materials for publication, commercial use, or distribution requires written or oral permission from the Board of Editors or the author. Hyperlink to Qazaqstan tarihy portal is necessary. All rights reserved by the Law RK “On author’s rights and related rights”. To request authorization email to mail@e-history.kz or call to 8 (7172) 57 60 13 (in - 1163)
Қазақша Русский English
MOST READ
Week Month Year
History of pandemic in Central Asia
History of Wusun State and Yuezhi tribe THE GREAT SON OF THE GREAT STEPPE Where did Tengriism come from? Armenians and their kinship with the Kazakh people Online documentaries Today is Kazakhstan Police Day Nurmukhan Zhanturin. Actor who played himself Aytys between Suyunbay and Katagan Doctors-comrades-in-arms of A. Bukeyhanov Nurtas Ondasynov. Kunayev’s Chief Symbols of people's hope and dreams We need to know the light and dark pages of history - Makhabbat Kozybayeva

Materials on theme
М.Kimyagarov shares his opinion regarding early parliamentarian elections
The ex-Supreme mufti of Kazakhstan commented on the 5th Congress of world religions
The Kuralai Puppet Theatre International Festival
Institute of State History invites you to participate in the International Scientific and Practical Conference