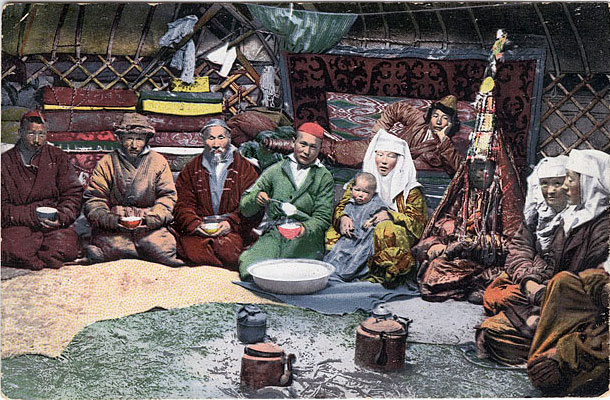 Family relations were piously supported from generation to generation and strictly followed.
From the earliest times, Kazakhs’ relations were stable, and many traditions and customs, which were made on that base, serve as vivid evidence nowadays.
It was justly said: «It’s good to have fun with strangers and share grief with close people». «Relatives can quarrel, make it up again, but they never part».
To respect older people, to protect younger, even to lavish care and attention about an absolute stranger, to treat him, to give him shelter according to all the existing rules of hospitality, justly solve conflicts arising between people, were the standards of social relations.
The main part of them was the family relations, which were piously supported from generation to generation and were strictly followed.
In everyday life they were mutually helping each other morally. And during marriages of their daughters or sons, during funerals and funeral rites, or in case there were acts of God, relatives always did what they could to help each other. Such aid was called zhylu (warmth) that was evidence of people’s closeness.
Usually these family bonds were firstly kept by father’s relatives’ side.
For example, if the head of the family died, then the assignees could be chosen only from his relatives. If the late had no children, his property was inherited by his brothers, their children and other relatives. Nobody else could claim his property.
If he had children, then the whole property was inherited by the youngest son. In this case the wife of the late lost all her rights of the mistress and kept living with the youngest son.
According to the traditions, the youngest son never established his own household, as he was the heir of the father’s house and household (kara shanyrak). All the relatives regardless of their age compared to their heir, honored that house.
If the head of the shanyrak died early, then his wife married his brother or his other relative, who took her maintenance and upbringing of her children under his responsibility, and then all their property belonged to him.
In case if the wife of the late husband married another person or returned to her relatives, then she could only take her clothes, bedding and one horse.
Thus, from time immemorial the family relations were closely connected with the heritage.
Besides, in-laws, bound with the friendship and mutual respect always shared joy and grief in any circumstances.
Children of the own sisters, once removed and twice removed sisters, who married people from different kin, are related to each other as cousins (bole). Depending on the degree of relation of their mothers, they become very close to each other.
Thus, it can be noticed that Kazakhs’ family relations are a bright example of many Asian ones, and even partially similar to European family relations.
Used materials:
Dzhelbudin E.T. Traditions and customs of Kazakhs. Adet-Guryp.

Use of materials for publication, commercial use, or distribution requires written or oral permission from the Board of Editors or the author. Hyperlink to Qazaqstan tarihy portal is necessary. All rights reserved by the Law RK “On author’s rights and related rights”. To request authorization email to mail@e-history.kz or call to 8 (7172) 57 60 13 (in - 1163)
Қазақша Русский English
MOST READ
Month Year
Recorded history of Kazakhstan. Part 2
Heroic mothers of the great steppe
How had the World War II been started?
Philosophy of the Emblem
14 monuments at Tekturmas
The rural akims: the country's hope is in the elections
Kazakh historical drama Tomiris premiered in Istanbul
Stolypin about the worries and hopes of immigrants to the Kazakh steppes
ALASH IDEA IS THE PROTECTION OF KAZAKH STATEHOOD
A tireless explorer of the Kazakh land
SWITCHING TO THE LATIN ALPHABET – UNITE ALL KAZAKH PEOPLE
Kunaev Dinmukhamed Akhmedovich
People who eat horses will kill you
Materials on theme
Exhibition of Berik Alibay Kazakh jeweler
"The current problems of history and social sciences and humanities"
The Old-Timer Buildings. The house of merchant Karev
Today at 7 pm on the Internet-portal e-history.kz the direct translation of the theatre show “Mangilik El” will be on