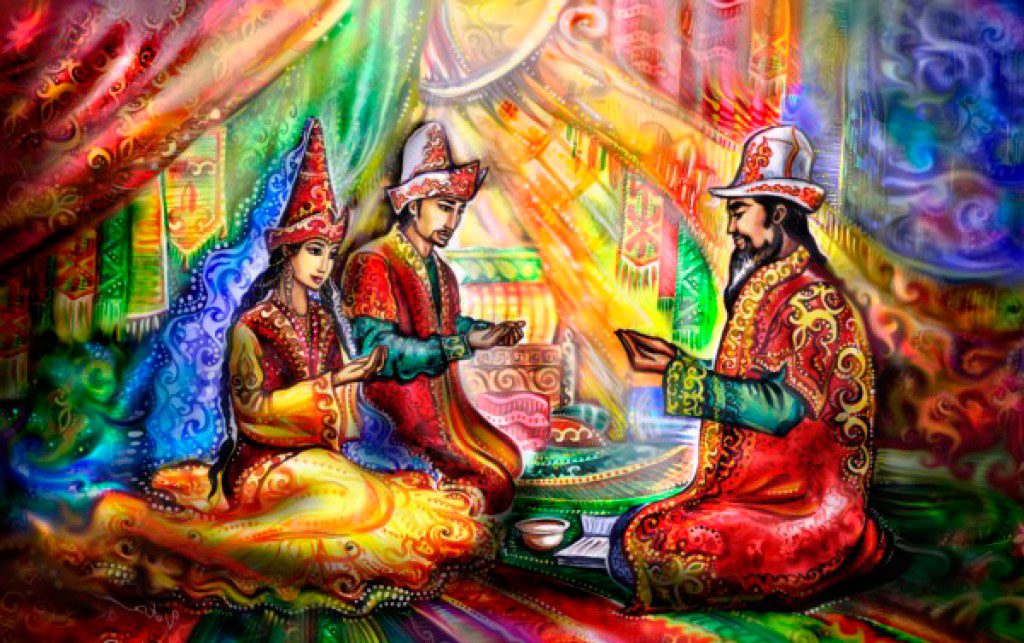 The wedding among Kazakhs has outstood with its unique traditions since the ancient times.
At wedding celebration there were popular different games: baige (races), kures (wrestling), saiys (horseman duel), kokpar (fight of the horsemen for the goat kid’s carcass). The spousal hands were tied with the approval of the relatives and were accompanied with the choral songs «zhar-zhar», with which they expressed their wishes of happy life to the young couple and edifications to them.

On such merry and joyful wave the wedding went on. It was kind of theatric spectacle where creativity and skills were valued and love and respect were prevailing.

On the eve of departure to the groom’s house, the bride, together with her friends made round of all her relatives saying goodbye to them. According to the tradition, it was called kyz tanysu (final visit). The relatives and close people did honors, presented expensive gifts, gave advice, wishing happiness and joy. This ancient tradition was used to be a very good way of upbringing, behavior ethics. On the departure day, people showed the dowry, prepared the festive caravan for the departure and presented gifts to the matchmakers, groom and the bride.

Then on a separate yurta, the girl was dressed into the bride’s dress. Her head was covered with the bride’s hat «saukele» with the special long veil (zhelek), in which she had to come to the groom’s aul.

The greatest dream, joy and real festivity of all the Kazakhs was the custom of «kelin tusuru» (welcoming the bride at home). The whole aul was preparing to the occasion.

The girl was not led to the threshold; she was waiting together with the zhenge (one of the sisters or aunts of the groom) at a decent distance from the aul. Other girls went to meet her and without showing her face brought her home and put her behind the curtain (shymyldyk) together with other girls.

The threshold should be crossed with the right foot first according to the tradition.

The meeting people were showering the entering people with sweets and coins (shashu) greeted everybody.

Together with the bride there was her mother, sisters, sisters-in-law. All relatives and friends were arriving to the aul; there was a feast, treatment for everybody and fun games. After all the invited guests gathered, the bride was ushered to put on a rich wedding dress, her face covered with the veil and the presenter started his song — ballade «Betashar» (opening face of the bride).

The meaning of the song was that she now had to respect her husband, his parents and all his relatives, not to gossip, honor the traditions and work honestly. After that she was introduced to all the relatives of her husband, to whom she had to bow. In reply to that action, all the relatives announced what gifts they are presenting to the new family.

After the wedding feats, the bride’s relatives were presented with gifts and then were seen off home. In a while, the bride’s hat (saukele) was changed to a hat of a woman (zhaulyk or kimeshek) and that meant that from now on she was a married woman.

Dwelling on some rituals, which are repeated time and again on each stage of the matchmaking and wedding itself, one of the most popular — showering the youngsters (shashu) will be taken.

The given rite was done in the bride’s aul, as well as the groom’s aul by the women of venerable age. The showering usually was done with dried cheese pieces (sykla), baursak, sweets, dried fruits, coins, which was accompanied with the best wishes to the young couple. Judging by the expression «nurzhausyn» (let the sunshine shine upon you), the showering meant the rain that poured on the young couple, that according to the beliefs, was to bring them happiness.

Many of the elements of these ancient traditions, ceremonies, rituals are still used nowadays, as they embody kindness, friendship and compassion to a man.