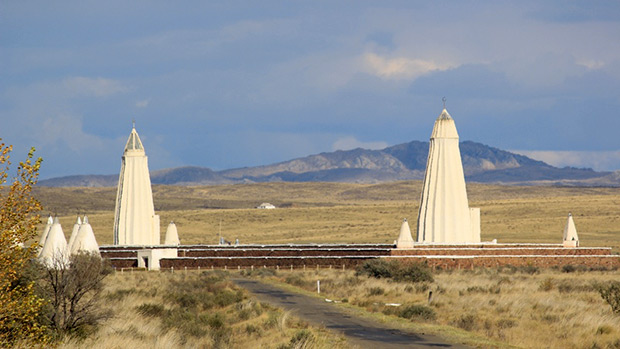 Two white towers stick out of the steppe on the edge of the Zhidebay village, 180 kilometer to the south of Semipalatinsk

Two white towers stick out of the steppe on the edge of the Zhidebay village, 180 kilometer to the south of Semipalatinsk. One can see their glow from a distance of up to 20 kilometre. On coming here, one sees a huge complex of monuments, the double mausoleum for the national poet Abai Kunanbayev and the philosopher Shakarim Kudayberdiyev. Both men’s fates were closely linked to Zhidebay.Abay spent winter months here in his childhood, while his younger relative Shakarim was brought up by his father’s family.

Zhidebay was the winter residence of Abai’s father, a wealthy Kazakh who had been authorized to act as administrator with the title of sultan over a large area between Karkaralinsk and Semipalatinsk. It was a very large home, the family was closely intertwined and Abai liked to invite his Russian friends from Semipalatinsk. After his eldest son Ospan had married, father gave him the estate and moved with the rest of the family to Akshoky valley, at a distance of 50 kilometer. After Ospan’s death, Abai took the estate over and went to live there with his three wives Dilda, Aygerim and Erkezhan. His marriage with Dilda had been arranged without having a say in it and in spite of the fact that he was in love with another girl. Aygerim was his great love in later times and this marriage had been his dearest wish. As for Erkezhan, she had been the wife of Ospan and fully in line with the tradition of the steppe came under her late husband’s brother’s care.

Today, the house of the Kunanbayevs has become a museum in which numerous objects of daily life are being displayed. The books in particular show many interesting aspects of the life style of a wealthy Kazakh family during the second half of XIX century.

The mausoleums stand nearly a kilometer off the road. Even on closing days, there is always someone in the village who is ready to open it and invite visitors to a guided tour.

In 1995, in the presence of the President Nursultan Nazarbayev and 20000 other guests, the double mausoleum, designed by the architect Bek Ibrayev was opened. It has a length of 180 meter and a width of 60 meter. It is crowned by two elegant, tower-like mausoleums. The biggest of them is 37 meter high, nine meter in diameter and dedicated to Abai. The smaller one, 35 meter high is in the honor of Shakarim, who perished by the hands of Stalin’s purgers in 1931.

The mausoleums stand on a structure that has the shape of a pyramid and in composed of three stone plates topping one another. The dark on the bottom symbolizes the ancient history of the Kazakhs, the pink one in the middle stands for the lives and times of Abai and Shakarim, the white sandstone plate on top for the present. Inside the foundation there is an extraordinary library. It receives daylight from above and forms a ring around an amphitheater embedded in the foundation. Each year, recital contests are being held for schoolchildren from the eighth till the eleventh course. The record has been set by a schoolgirl who recited 400 poems and songs of Abai by heart.

The architectural ensemble is completed by a mosque with futuristic looks. The house of prayer is of moving simplicity and consists of four round spaced, each crowned by a conical tower with the obligatory mihrab as their soul decoration.

Use of materials for publication, commercial use, or distribution requires written or oral permission from the Board of Editors or the author. Hyperlink to Qazaqstan tarihy portal is necessary. All rights reserved by the Law RK “On author’s rights and related rights”. To request authorization email to mail@e-history.kz or call to 8 (7172) 57 60 13 (in - 1163)
Қазақша Русский English
MOST READ
Month Year
The referendum on the Constitution is a significant stage of democratization
Philosophy of the Emblem
The rural akims: the country's hope is in the elections
Kazakh historical drama Tomiris premiered in Istanbul
Stolypin about the worries and hopes of immigrants to the Kazakh steppes
ALASH IDEA IS THE PROTECTION OF KAZAKH STATEHOOD
A tireless explorer of the Kazakh land
SWITCHING TO THE LATIN ALPHABET – UNITE ALL KAZAKH PEOPLE
Kunaev Dinmukhamed Akhmedovich
People who eat horses will kill you
Kazakhstan's participation in the Winter Olympics has a long history
Rebooting a field of science and education
Recorded history of Kazakhstan. Part 1
Materials on theme
Exhibition of artworks “Country of Bulgaria”
Historical meaning of the battle of Atlakh in the fate of Kazakhs
The Cabinet-Museum of K.A. Akishev was opened at the Eurasian National University
Infographics: Kazakhstan’s Сontribution to Victory in the Great Patriotic War