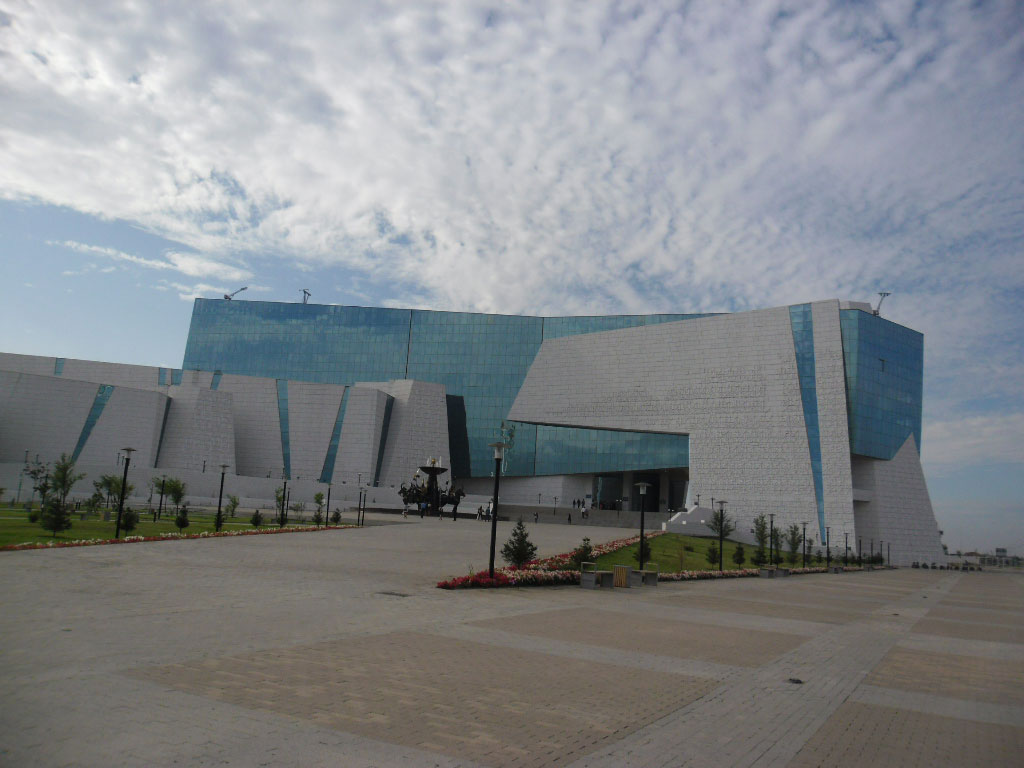 The auction “Gift to museum” started on 18 March during current year in National Museum of Republic of Kazakhstan in Astana.
9 December 2015 at the National museum of the Republic of Kazakhstan took place the opening of the exhibition collected within the framework of the auction “Gift to national museum”. Also, as the results of the auction “Thanks for the Victory!” organized by the Agency “Khabar” within the celebration of the 70th anniversary of the Great Victory and the first year of the auction “Gift to national museum” the festive giving out to the museum of the copy of the Banner of Victory was held. In the event the veterans of the Great Patriotic War, deputies of the Parliament RK, representatives of the public associations of Astana participated.

The auction “Gift to museum” started on 18 March during current year in National Museum of Republic of Kazakhstan in Astana. At the event Berdibek Saparbayev who at that time was the deputy of the Prime Minister RK, son of Kenen Azerbayev Bakhytzhan Azerbayev, champion of Moscow Olympiad Zhaksylyk Ushkempirov, a famous politologist Yerlan Karin, the chairman of the fund “Kadyr Myrzaliyev” Donedil Kazhymov, champions of the Olympic games Serik Sapiyev, Bakhyt Sarsekbayev, Yuriy Melnichenko and other famous personalities in the country, collectors, descendants of famous people, sportsmen and private persons took part. Further, the auction proceeded in Almaty and Kyzylorda. As a result of the auction the funds of the National Museum were filled with 1100 exhibition pieces belonging to famous personalities.

Among them it is possible to note K. Azerbayev’s dombra, K. Kaysenov’s knife, exemption card and awards of Zh. Tashenov, piano, ash tray and caracul hat of Sh. Kaldayakov, briefcase and cigar case of Zh. Nazhmidenov, brushes for painting and fancy bags of G. Ismailova, pen and hand watches of K. Myrza Ali.

To add, the museum funds were filled with the showpieces transferred by our sportsmen: gold medals and sports costumes of the first Olympic champion-Kazakh Zh. Ushkempirov, flag of Kazakhstan, which was in Mecca along with the pilgrim-runner Dulat Imankazhy, also sports awards and personal belongings of S. Sapiyev, B. Sarsekbayev, Y. Melnichenko. The auction will be proceeded also during current year. The National museum plans to conduct similar auctions in all the regions of the country.

Official ceremony of the transfer of the Copy of the Banner of Victory was held on 21 April 2010 in Moscow within the preparation to the celebration of the 65th anniversary of the Great Victory over fascist Germany. The festive event was carried at Poklonnaya Gora in the Hall of the Honour in Battle of Russia. The banner of Victory was transferred by the Hero of the Soviet Union General V. Ulyanov and Chairman of the Committee on the affairs of warriors-internationalists Hero of the Soviet Union R. S. Aushev, Kazakhstan delegation headed by the Chairman of Astana branch “Birlik”, party “Nur Otan” S. K. Mukanov and Chairman of the Association of veterans of Afghanistan and local wars in the Republic of Kazakhstan Sh. A. Utegenov.

This became the official proof and acknowledgement of the feat of our countryman Rakhimzhan Koshkarbayev and Kirov resident Grigoriy Bulatov who on 30 April 1945 at 18:30 were the first to raise the Banner of Victory at Reichstag. 7 May 2015 in honor of the 70th anniversary of the Great Victory in Astana the Parade of Victory and the festive carrying out of the flag of the Republic of Kazakhstan and the copies of the Banner of Victory with participation of the First President of the Republic of Kazakhstan, Leader of Nation N. A. Nazarbayev were held.