Home News Other Made by folk craftsmen

Made by folk craftsmen 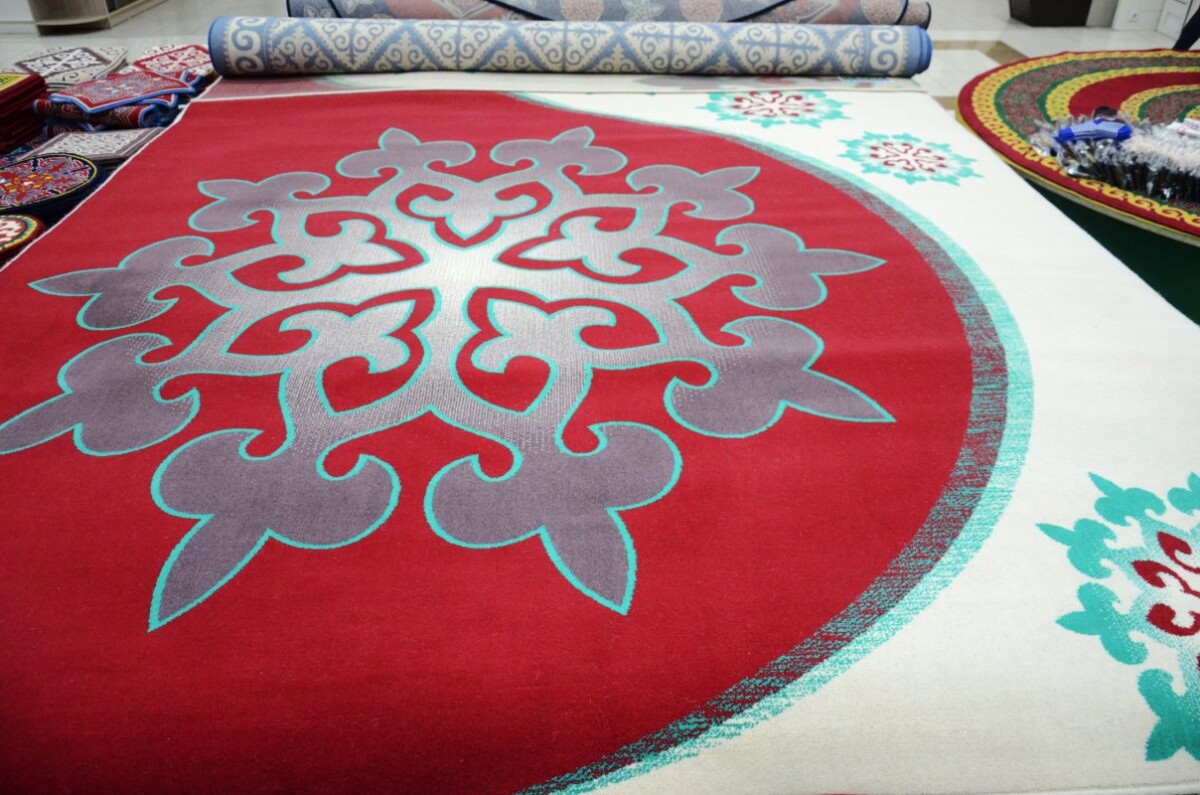 Felt production, carpet weaving and embroidery were the most common form of housecraft of the Kazakhs since the ancient times

Felt production, carpet weaving and embroidery were the most common form of housecraft of the Kazakhs since the ancient times. Felt production is a difficult process, requiring specific skills. It consisted of several stages: wool preparation, its layout on a mat, hot water injection, compaction and the finished felt. The Kazakhs used dyes from different plants, roots and mineral salts for wool coloring up to the middle of XIX century. Aniline dyes were imported in Kazakhstan in the second half of XIX century, and they gradually replaced natural dyes.

Women not only of one family took part in felt production, but all inhabitants of an aul. The felt was used for various parts of yurta’s covering, for saddle pads (tokym), headdresses (kalpak), raincoats (kebenek), stockings for boots (baipak), holders for kazans (kol kap). However, the majority of felt items was used in yurta’s interior. These items were examples of decorative art of the Kazakhs.

Felt carpet tekemet, basically used for floor covering in a yurta was the most popular among the Kazakhs up to the early XX century. Tekemet was produced in several ways. The ornament of tekemets was traditional: there were several rhombic figures in the central field, in which a special pattern «kos muiz» in the form of a crosspiece of «pair horns» was inserted. The pattern of «running waves» or doubled «s», in the form of sheep horns (Koshkar muiz), in the form of one horn (synar muiz) was also applied. The central field was framed with a pattern frame in the form of a repeated strip of a zoomorphic or geometrical pattern. Zoomorphic patterns prevailed in tekemets’ ornaments. 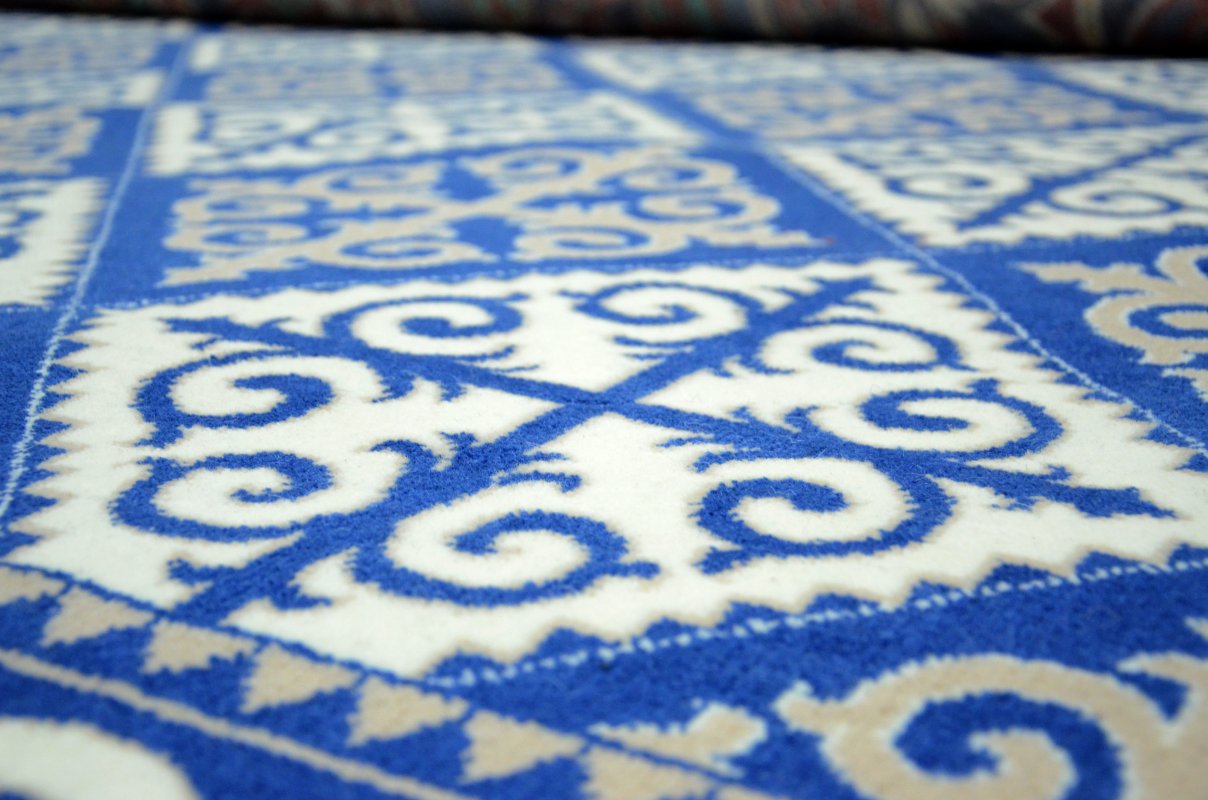 The second way of tekemet production was preparation of half-made color-cloth (taldyrma), then patterns were cut out of it and rolled in a wool layer. Cut patterns were used in the southeast of Kazakhstan, Semirechensk area, in the east — in Semipalatinsk area and in some volosts of Akmolinsk districts. Pattern application was also used for tekemet production, when patterns from different materials — cloth, velvet, cotton fabric — were sewed on a one-color felt basis. Such tekemets were called «oyuli tekemet», meaning «cut tekemet». Syrmak — a kind of felt carpet, which was especially appreciated by the Kazakhs. If tekemets were laid on a floor, syrmak was used for decoration of walls. Syrmak manufacturing is a simple, but more labor-consuming task. Four methods were applied during syrmak manufacturing: a mosaic of multi-colored felt pieces, application with one color material on white felt, corded ligature on a one-color felt and ornament from color threads. 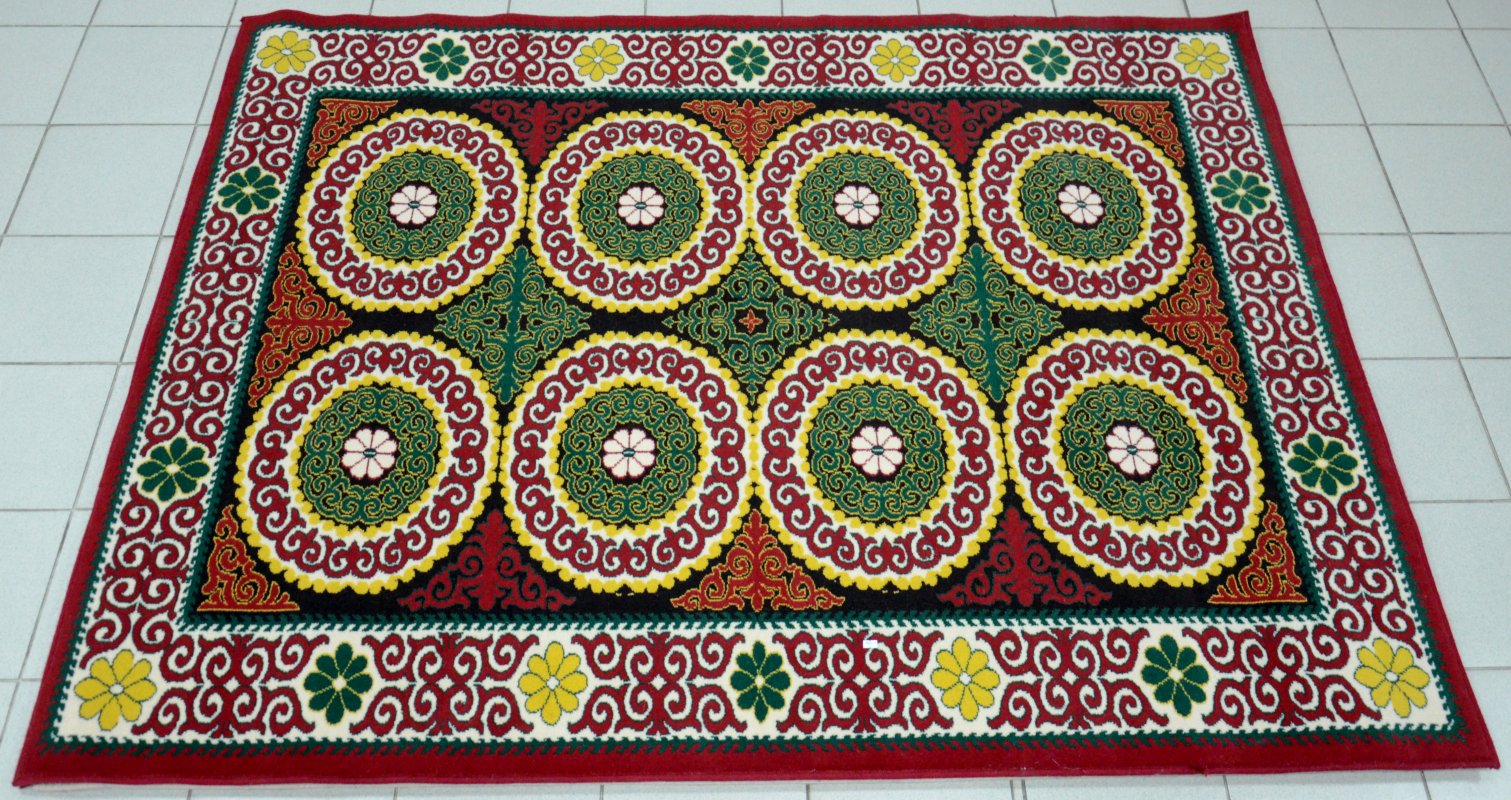 Felt tuskiizes decorated only walls of yurtas and houses. They were created with mosaic, application and embroidery methods. Ornament of tuskiizes has U-shaped border, framing an internal rectangle. Zoomorphic and vegetative patterns were used equally.

Besides felt carpets, Kazakh women made lots of various felt hanging bags for wooden ware storage (ayak kap), felt suitcases (shabadan), bales (ten). Ayak kap especially colorfully decorated yurta’s interior — it was hanged for angular loops on kerege’s head. It was usually placed in a business part of a yurta — to the right of the door. Carpets manufacturing was an important branch of weaving industry of the Kazakhs. Carpets were of two kinds: nap and napless. Nap carpets (tukti kilem) were weaved on horizontal machines by an alternate nap knots on a basis thread of a carpet, and by a linen interlacing of each central knot range, creating a strong frame of a carpet and a fuzzy surface.

Alasha — a carpet product, very popular in the past —was weaved on a special machine (ormek). Alasha was the most accessible carpet product, and it was weaved throughout the territory of Kazakhstan. The width of a strip was up to 40-50 cm and even more, and the length depended on patience of a worker and quantity of threads. The strip was cut on equal parts, which were sewed together. Alasha’s ornament consisted mostly of zoomorphic and geometrical patterns. Alasha was used to cover a floor or it was hung up on kereges or walls.

Kazakh artisans were very good in currying, using leather not only for clothes, but also for numerous household items, horse equipment and weaponry of the nomads.

Used materials: History of Kazakhstan (from ancient times to the present days)