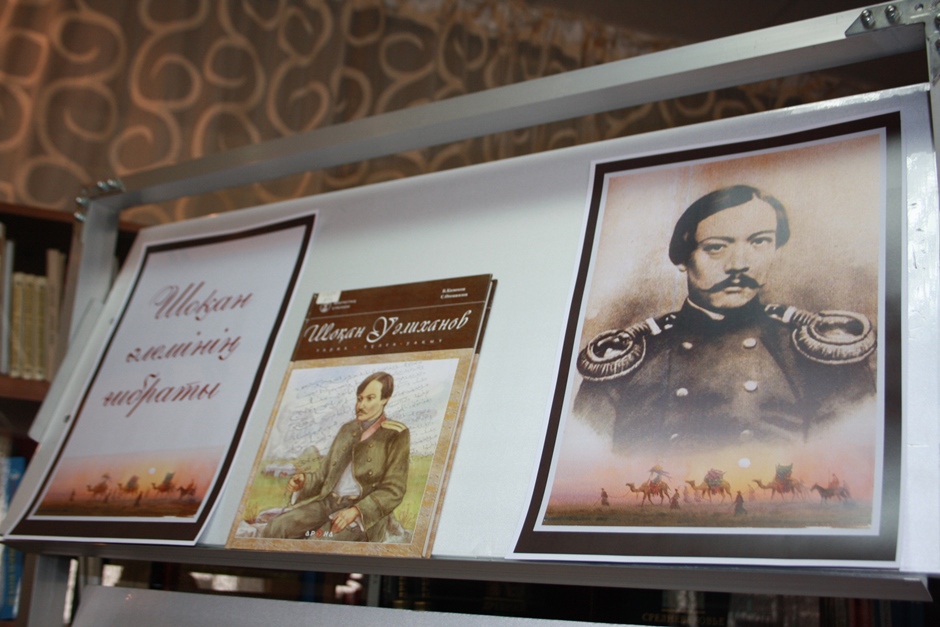 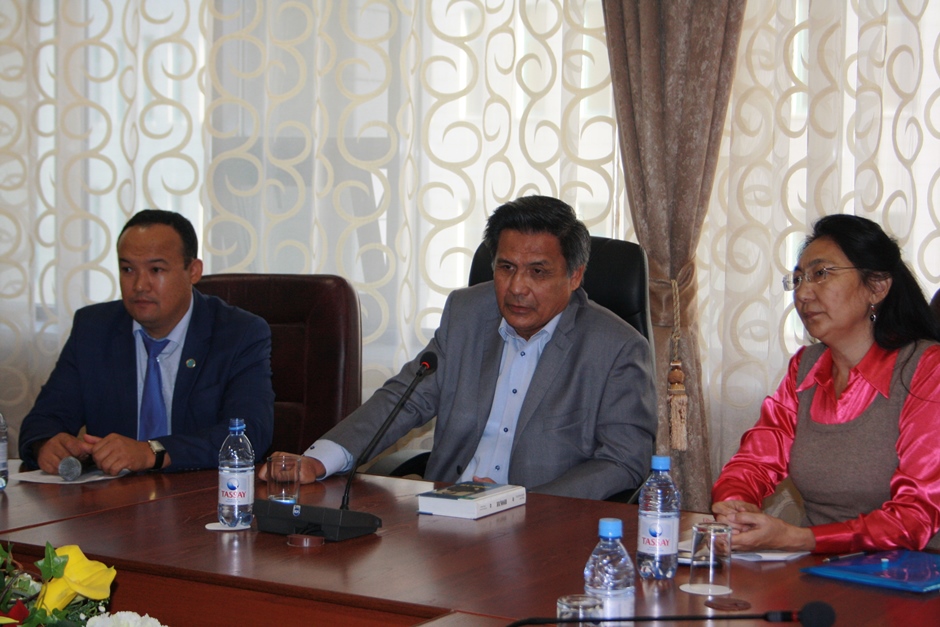 At the event there were the students of the school named after A. Margulan and school “Zhas Ulan” named after General S. K. Nurmagambetov, who got the information on the great historical personality from the following personalities: a journalist-writer, turcologist, candidate of philological sciences Zharylkap Beysenbayuly, scientists, specialists of the Institute of State History Kundyzay Erimbetova, Gani Karasayev and Kanat Ensenov. 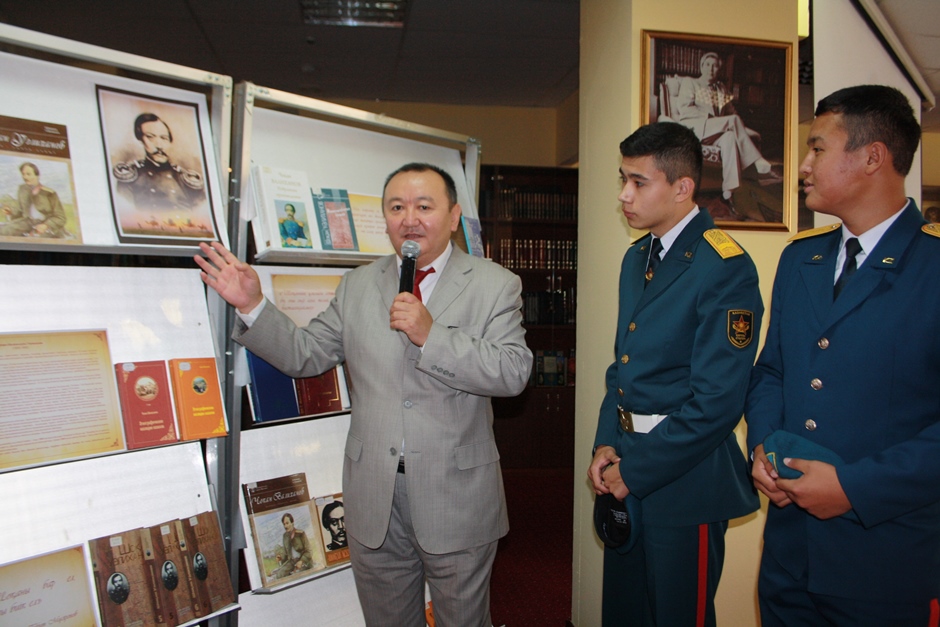 As Zharylkap Beysenbayuly noted, Shokan Ualikhanov, first of all, was a wonderful translator, knew many languages, including Manchu and Chagatay, which contributed to his successful realization in the professional plan. He also noted that Shokan Ualikhanov remains important, “in order to understand him, one must read him, till today the scientists study his works”. Kundyzay Erimbetova said, “In order to make the people eternal, the consciousness and knowledge are needy, and it is necessary to remember and study such heroes”. Kanat Ensepov noted that the young generation is the citizens of the independent Kazakhstan, the dreams of our ancestors are realized, that is why, by having all the conditions the young people are to understand modern knowledge.
Also, within the framework of the round table the exhibition “Shokan murasy — dauir shezhiresi” was conducted. In that exhibition the organizers of the event presented the rare edition — compilation of the works of Shokan ualikhanov, edited in 1904 thanks to the scientist N. I. Veselovsky. In addition, the zhyr “Edige-Toktamys” by Shokan Ualikhanov published in 1905 thanks to P. M. Melioransky was presented to the audience. 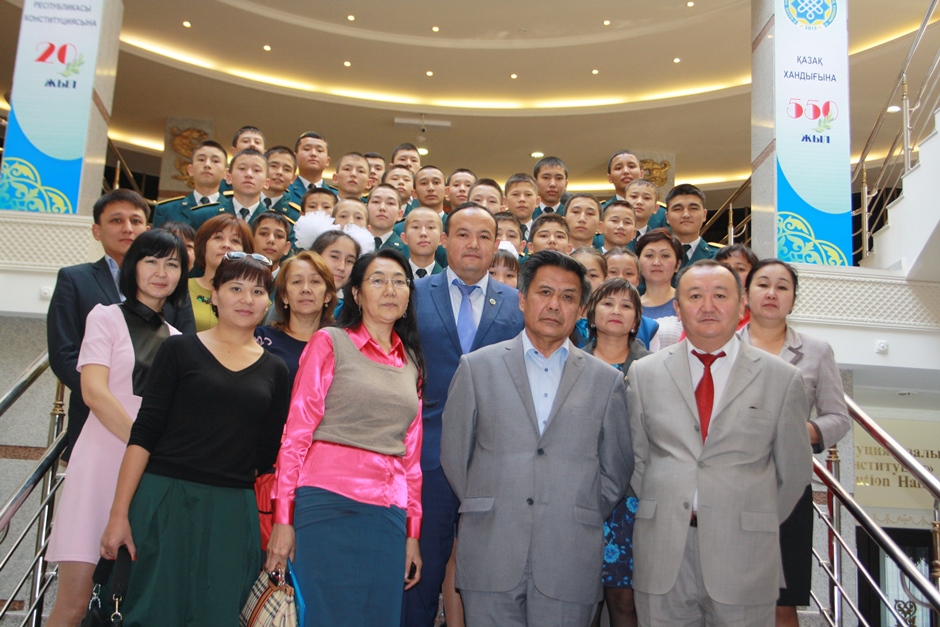 It should be pointed out that Shokan Ualikhanov along with the Russian revolutionary democrats was an ardent patriot of his people, his Motherland. He as the democrat struggled for everything new, advanced and progressive both in the sphere of social, and economic transformations. At the same time he subjected to the deadly criticism the formalism the bureaucratic routine, which led any helpful action of a person to the stagnation. “Formalism and bureaucratic routine”, he wrote, they determined only one stagnation and served till today under the Chinese wall for any useful social activity, by stopping the free flow of those hourly and daily transformations and improvements of which the living people’s force requires". All the members of the round table expressed the gratitude for the organization of the meeting in honour of the 180th anniversary of Shokan Ualikhanov.
Use of materials for publication, commercial use, or distribution requires written or oral permission from the Board of Editors or the author. Hyperlink to Qazaqstan tarihy portal is necessary. All rights reserved by the Law RK “On author’s rights and related rights”. To request authorization email to mail@e-history.kz or call to 8 (7172) 57 60 13 (in - 1163)
Қазақша Русский English
MOST READ
Month Year
Recorded history of Kazakhstan. Part 2
Heroic mothers of the great steppe
How had the World War II been started?
Philosophy of the Emblem
14 monuments at Tekturmas
The rural akims: the country's hope is in the elections
Kazakh historical drama Tomiris premiered in Istanbul
Stolypin about the worries and hopes of immigrants to the Kazakh steppes
ALASH IDEA IS THE PROTECTION OF KAZAKH STATEHOOD
A tireless explorer of the Kazakh land
SWITCHING TO THE LATIN ALPHABET – UNITE ALL KAZAKH PEOPLE
Kunaev Dinmukhamed Akhmedovich
People who eat horses will kill you
Materials on theme
The Kazakh-Russian-Italian dictionary of archeological terminology
DOSALY LED KAZAKH PEOPLE IN THE PUGACHEV REVOLT
ZATAYEVICH – A TREASURER OF KAZAKH SONGS
The first Kazakh opera