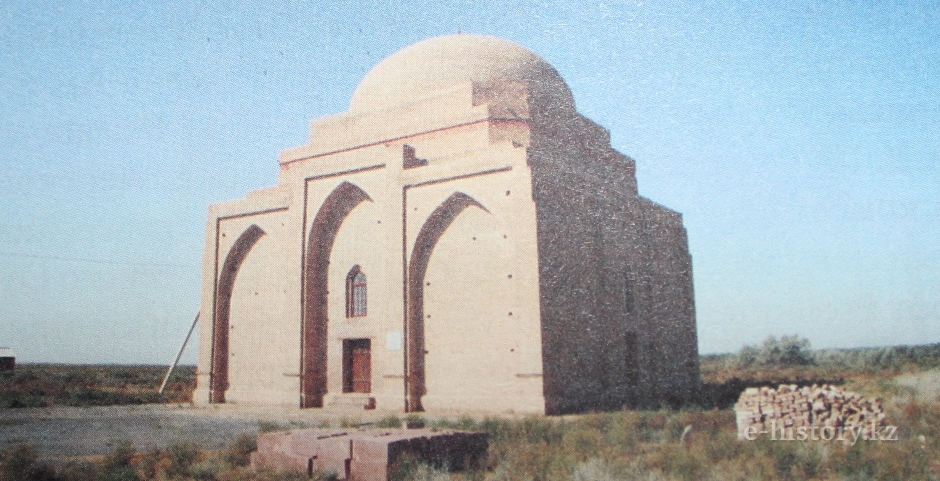 The mosque is so high that the mausoleums of Khoja Ahmad Yasawi are seen
The mosque (1884) is situated in the place Aktas, Zhanakorgan district, Kyzylorda region. The construction was built and called “Aktas” under Aikozha-ishan’s will, whose mausoleum is located nearby. According to legend, his elder son Ibadulla started to build the mosque, and his son Atamagzum finished it. The building was financed by one Tashkenbay, and the master was invited from Samarkand (Manap Kukenov reported). 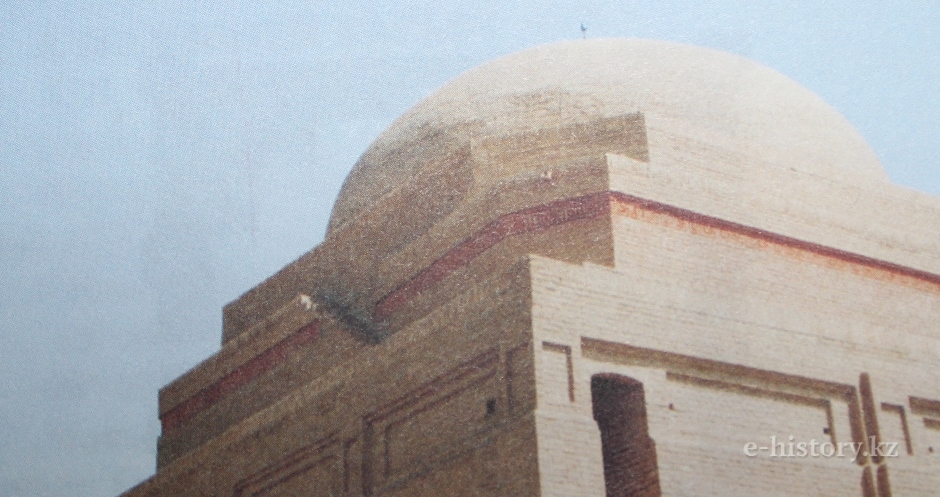 The building is situated on the high, above flood-plain terrace of the right bank of the Syrdarya; at the foot of the terrace there is the spring, to which the healing power is referred. The mosque is so high that the mausoleums of Khoja Ahmad Yasawi and Arystan-baba are seen. Before leaving for Mecca, the pilgrims got together near the mosque. The construction was put up from the rectangular hard-burnt brick, overall dimensions in plan view 18,55×19,03 m, height — 20,0 m. 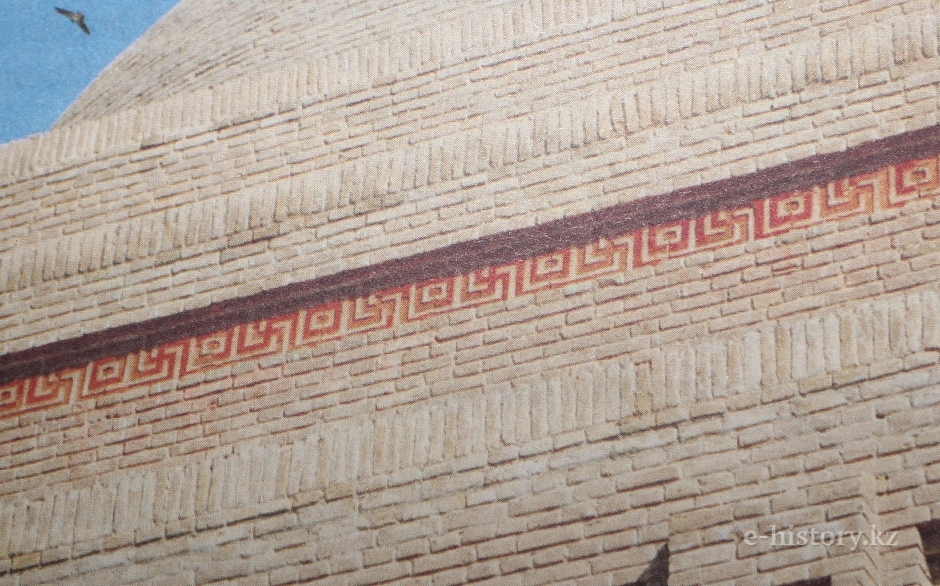 The monument had the dome-centric structure, reminding the Aikozha mausoleum, obviously, not in vain — it is the only in the low reach of the Syrdarya dome mosque. The basement of the building in plan view is square, three-stage dome drum is completed by the hemisphere dome (slightly the lancet form in the upper part is designed).
The main capacity in main and side facades is divided into three sections by bands, hereby, formed in such a way niches at the main facade are deeper than in side, and are overlapped by lancet arches. The central part of the main facade rises higher than the roof of the base capacity and forms a small portal. 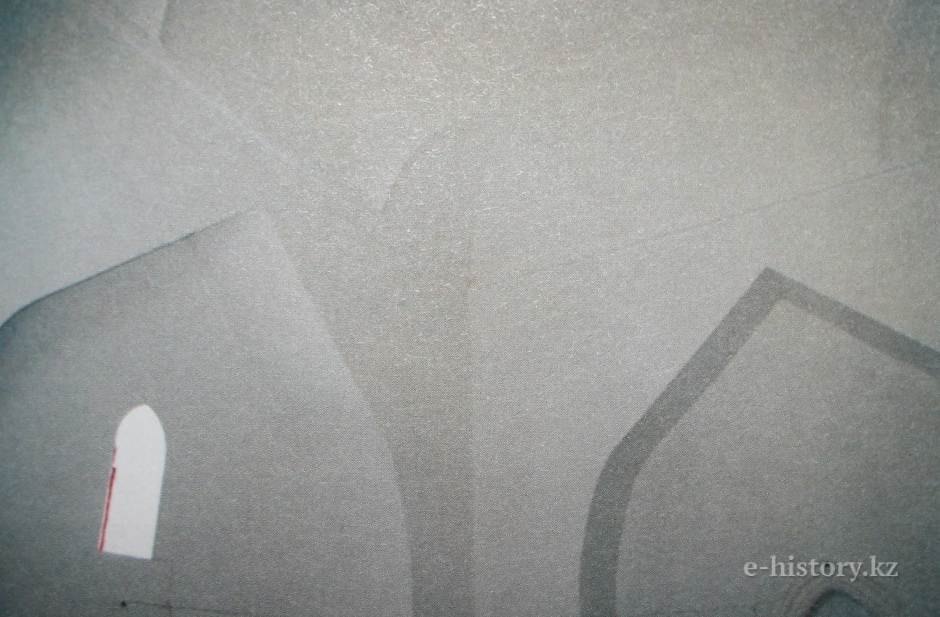 In the dome at the southern angle initially was an embrasure overlapped by a bulbous arch, according to certain data, for the preachments. The dome is formed by metallic top with the crescent.
In the chamber of each of walls the large lancet niche is set, three of them were disclosed outwards by embrasures, the fourth — south-western — had a mihrab in the shape of overlapped lancet arch of the niche and had elaborate framing from the carved mix of gypsum and clay. It is the only attracting attention, intense with the décor stain in the “empty” interior. Transition to the circle of the dome is realized by the arch trumpet vaults with the filling of the half of closed vault, the trumpet vaults are based upon the shelf, going higher than the castles of mentioned four arches. 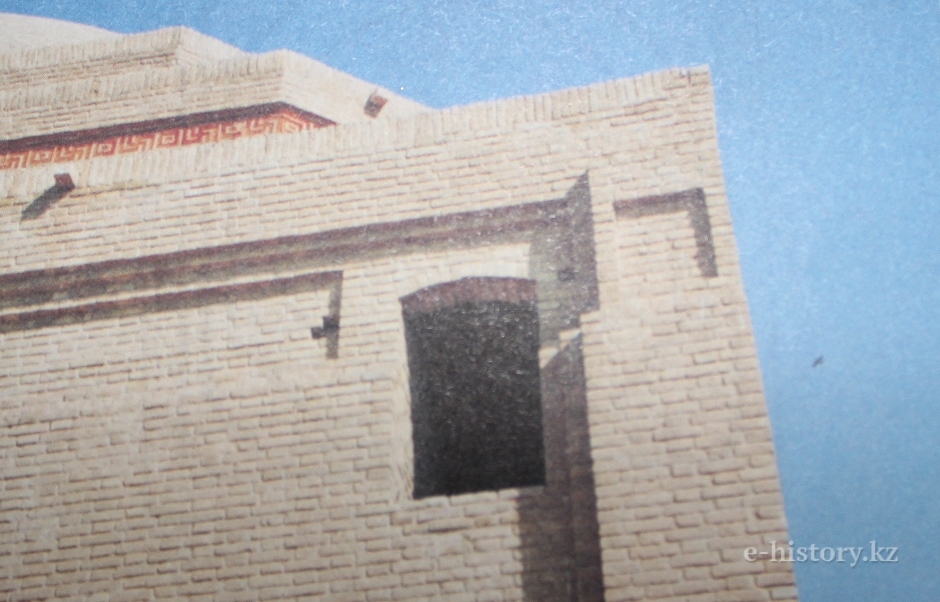 The interior was given in two colors: upon the whitewash in the basement of walls the panel of deep blue color was put, this color was introduced into the design of mihrab. The floor was laid by brick. After the repair the color scheme was lost. Aktas mosque — a single monumental dome mosque in the low reaches of the Syrdarya; that, also the character of the art design, take out the building to the number of unique ones.
Use of materials for publication, commercial use, or distribution requires written or oral permission from the Board of Editors or the author. Hyperlink to Qazaqstan tarihy portal is necessary. All rights reserved by the Law RK “On author’s rights and related rights”. To request authorization email to mail@e-history.kz or call to 8 (7172) 57 60 13 (in - 1163)
Қазақша Русский English
MOST READ
Week Month Year
History of Wusun State and Yuezhi tribe Images of Women in the Works of Qazaq Poets-Zhyrau Nurgissa Tlendiyev. Principal Conductor of Kazakhstan THE GREAT SON OF THE GREAT STEPPE What was the composition of the country’s Supreme Soviet of the XII Congress Ydyrys Mustambayev. Defender of Abai and Magzhan Abdurakhman Aitiyev and his struggle Where did Tengriism come from? Online documentaries Armenians and their kinship with the Kazakh people Today is Kazakhstan Police Day Nurmukhan Zhanturin. Actor who played himself

Materials on theme
Revitalisation of ancestral art
Tomyris. The Queen who defeated the Persians
Absattar Khoja Derbisali: “Thirty scientists with the name Farabi originate from Otyrar”
The history through the light of millennia