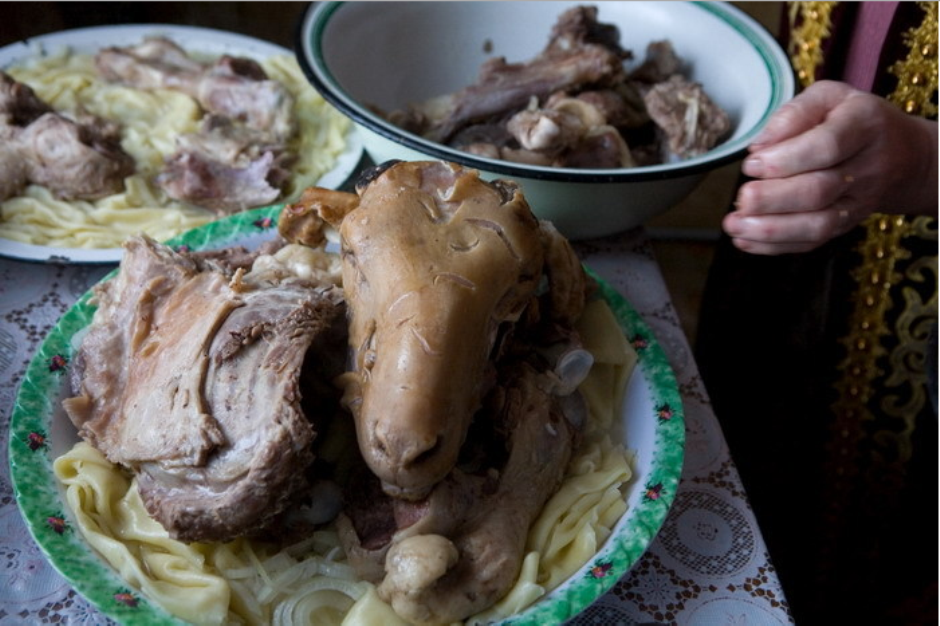 Traditional system of nourishment of Kazakhs was extremely saturated with cultural-ritual moments.
In traditional system of nourishment of Kazakhs the tracks of the of age and gender division of the Kazakh society which defined the social role of a person depending on age and gender. Introduction of a person into different stages of life path was accompanied by various holidays with treats. A vivid confirmation of this is the strict regulation adherent to the Kazakhs, and other Turkic people, of the order of seating of commensals according to their social and age status, position in the system of kinship and character of distribution of meat during meal (complicated classification of the parts of carcass according to the degree of prestige), role-playing settings for the participants of the meal and so on.

Traditional system of nourishment is exceedingly filled with cult-ritual moments. It should be noted that the Kazakh meal, both every-day, daily and festive, ritual was organized on the principle of age and gender division of participants. Such principle in meal presupposed the separate eating between men and women, children and adults. Guests formed supposedly following gender and age groups: men’s: old men-aksakals, adult men (over 20 years), young men and adolescents (from 15 to 20 years), and women’s: aged women, middle-aged and young married women, unmarried girls. In daily meals this principle was followed not particularly strictly, at festive meals the observance was mandatory. 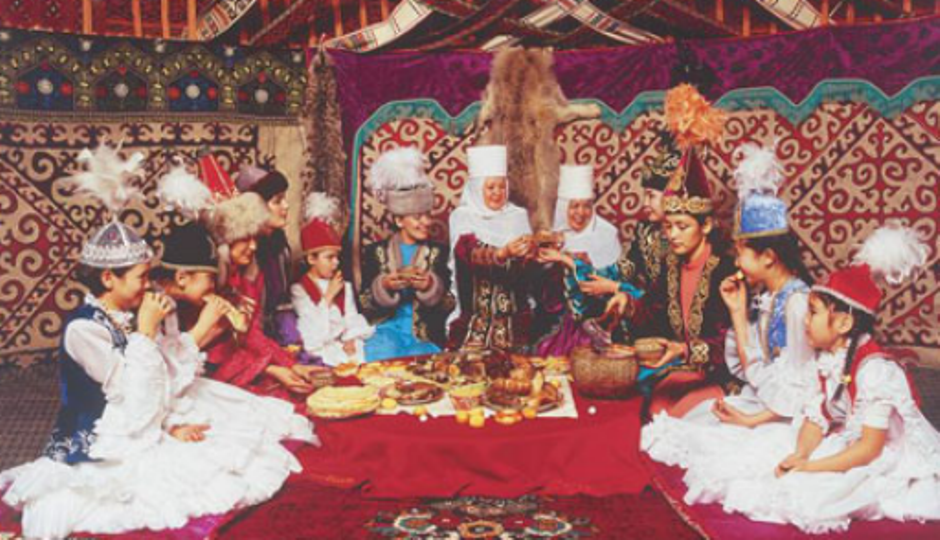 Perhaps, the principle of organization of any meals of Kazakhs represent the existence of the institute of age classes in the past. Transition of the group members to the following stages of the system of age classes was modelled by certain rites, including meals. N. Shahanova in her work “Mir traditsionnoy kultury kazahov” (“The world of traditional Kazakh culture”) gives the following classification of Kazakh feasts: 1.Feasts, corresponding the most important rites of the infancy. The typical method of these rites was the fact they were accomplished regardless the child’s gender: shildekhana, kyrkynnan shygaru, tusau kesu. 2. Feasts, noting certain stages of socialization: customs, connected with the socialization of the men’s part of society: atka mingizu, sundet toy, zhora boza. From women’s feasts the following can be added to this category: kursak toy, kalzha, bastangy, kimeshek and belshalgysh kigizu. 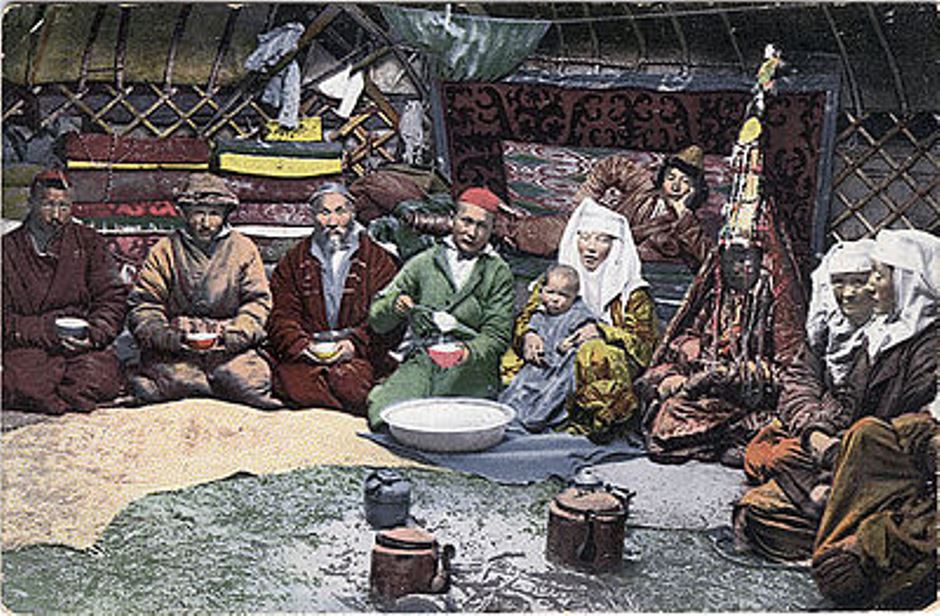 Also, there are such feasts as kursak toy or korsak shashu — feast in honor of a pregnant daughter-in-law, kalzha, shildekhana — feasts devoted to a child birth; besik toy — feast devoted to the placing of an infant to the cradle; kyrkynnan shygaru — the end of first forty days; tusau kesu — in honour of first separate steps of s child; balany atka mingizu — on the occasion of the first placing of a boy on the horse; tana tagar — on the occasion of the presenting the pearl metal plate to a child; sundet toy — feast on the occasion of Muslim circumcision; tokym kagar — in honor of the first sending of a young person to a distant way, not huge ritual feasts dedicated to the putting on the first kimeshek (change of wedding headwear “saukele” by the headwear of a married woman) by a young woman and first wearing of the belshalgyn — unsewn in front skirt by a middle-aged woman. Among the given meals the wedding feast of Kazakhs, more accurately, the complex of feasts was included into wedding ceremonial.

It is just a minor part of all meals connected with the Kazakh rites. Major part of them is preserved to this day, which reflects the stability of the perception about their necessity.

Use of materials for publication, commercial use, or distribution requires written or oral permission from the Board of Editors or the author. Hyperlink to Qazaqstan tarihy portal is necessary. All rights reserved by the Law RK “On author’s rights and related rights”. To request authorization email to mail@e-history.kz or call to 8 (7172) 57 60 13 (in - 1163)
Қазақша Русский English
MOST READ
Month Year
The referendum on the Constitution is a significant stage of democratization
Philosophy of the Emblem
The rural akims: the country's hope is in the elections
Kazakh historical drama Tomiris premiered in Istanbul
Stolypin about the worries and hopes of immigrants to the Kazakh steppes
ALASH IDEA IS THE PROTECTION OF KAZAKH STATEHOOD
A tireless explorer of the Kazakh land
SWITCHING TO THE LATIN ALPHABET – UNITE ALL KAZAKH PEOPLE
Kunaev Dinmukhamed Akhmedovich
People who eat horses will kill you
Kazakhstan's participation in the Winter Olympics has a long history
Rebooting a field of science and education
Recorded history of Kazakhstan. Part 1
Materials on theme
Unified medal to 70th anniversary of the Victory
Cultural Walk: Republican museum of Sport and Olympic glory
The story of one photo. Aleksandr Shelestov
An exhibition about Kimal Akishev opened at the National Museum of Kazakhstan