Home News Other Role of the dog among Turkic people

Role of the dog among Turkic people 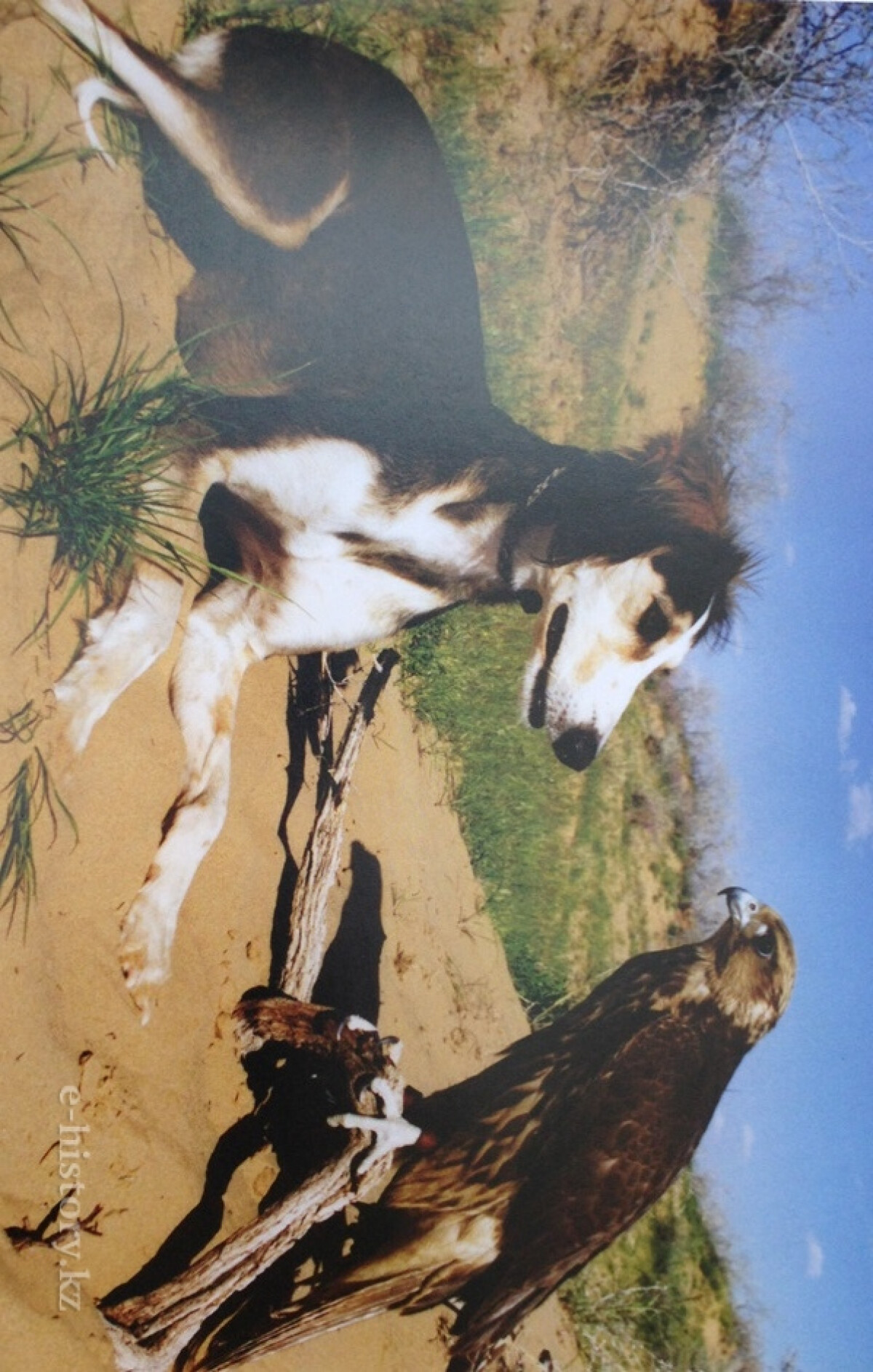 There is the archeological evidence that the ancient inhabitants of Kazakhstan during the building up of the house sacrificed the dog and dug its body under the threshold.
The dog which was considered one of the seven treasures of Kazakhs and standing at the head of them, is included into the twelve-year calendar. For ancient Turkic sources it is known that the word “it” (dog) has a very early origin, and was not being subject to changes. In any of Turkic languages this word, according to the sound composition, almost does not differ. For instance, in Tatar “et”, in Uzbek “it”, in Kyrgyz “it”.

The meaning and mystery of the names of hunting dogs in Kazakh — kumai and tazy (hound) are not solved yet. In several Turkic languages these names are met. Kumai is depicted in the form of griffin and denotes a fabulous bird samuryk (simurq). Connection of it with the hounding dog comes from the legend in which the griffin gives a birth to a goose and hound. Perhaps, Kazakhs who dreamt of light-footed dog, compared it with the bird. Nevertheless, the dog takes a worthy place among seven treasures of Kazakhs. However, here one can take into consideration not a dog, but a hound. Along with the nimble-footed horse, swift berkut and well-aimed rifle, it (dog) is inseparable companion of the man. Horse — dzhigit’s wing, dog — a house ear, berkut — a sustainer, rifle — means of defense (perhaps in ancient times it was a bow) — all of them had right places in the treasury. 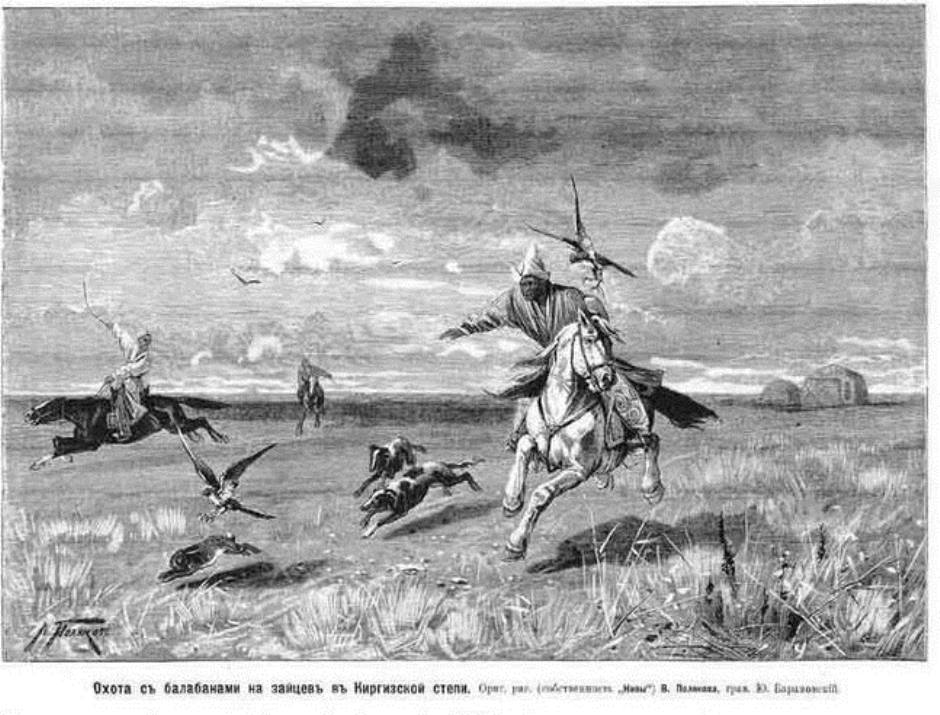 A dog, that is a tamed wolf, in the ancient times was the companion of the first hunters (19-7 th. BC). Till today the northern people dignify a few breeds of dogs (Huskie, Malamute) by means of the cross breeding them with wolves. Since ancient times in the myths of many nations of the world the dog is considered human’s companion, assistant and ally. In the epoch of bronze the dog, together with a cow and sheep, entered the group of sacrificed animals. During the excavation of Saraychik city the skeletons of four dogs were found. Two dogs were buried in the mud chamber, apparently, they were of one breed. Two other dogs were buried separately. The finding is related to XIV-XV cc. The tradition to bury the noble horses and hounds the same way as people has deep historical roots. 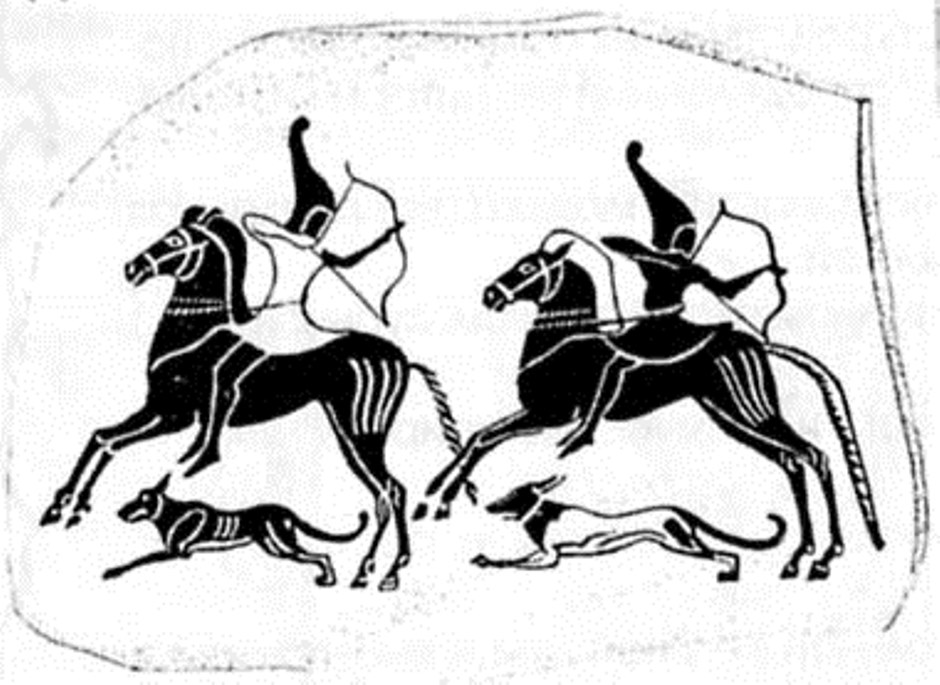 Over time, dogs had not only to guard the houses, but also to help in hunting. With intensive development of livestock the breeds of the dogs shepherds appeared. Totem of the dog is the cult of the epoch of matriarchy. In IV-VI cc. BC, till the appearance of the Hunns, in the tribes of the Sakas and Massagets, in Central Asia — till the emergence of Zoroastrianizm the cult of dog existed. There were even rock engravings with the picture of dog hunting. The skeleton of the most ancient dog found on the territory of Kazakhstan, dates back to XIV c. BC. — these are cremated remnants of two dogs from the Buensky mound (near Kapal) with the preserved skull and bones. In the middle of 1 th. BC in Central Asia and neighboring with it areas the ritual of the burial of dogs, both separately, and with the its master, was spread. The head of the dog in the crypt Zhyngildy in Khorezm, dog buried by the spring Kargay, in the valley of the Chu river in the epoch of Uisuns, bones of the dog in the necropolis of Tokkal are the evidence of the existence of the cult of the dog in the Central-Asian region in the ancient times. It was considered that as the horse so was the dog the conductor to the other world. 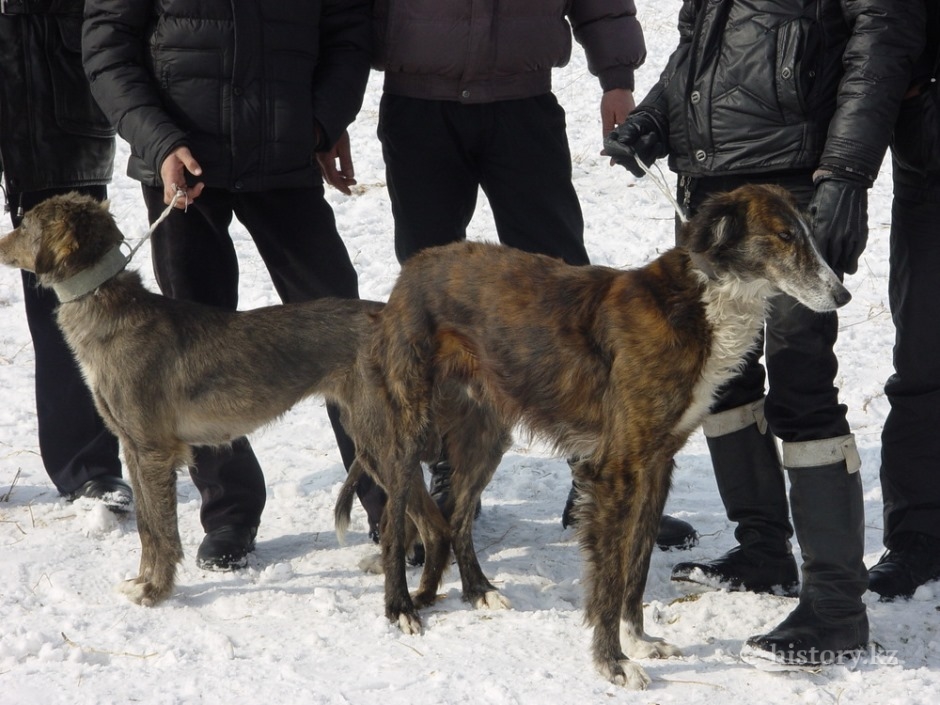 There is a lot of information about dogs given in the famous monument of the antiquity — Avesta, where it is written that the dog was compared with the most sacred animals. For instance, the mink was called “water dog” and hedgehog — “prickly dog”. Because of the fact that a dog became a devoted human’s friend, guard, faithful servant, in the folk the whole series of superstitions and customs has formed. In the pagan religions of numerous people the dog was prescribed the connection with the other world, and it was called “herald” of death. There is the archeological evidence that the ancient inhabitants of Kazakhstan during the building up of the house sacrificed the dog and dug its body under the threshold. This evidence is aligned with the Kazakh legend on the building of Ak-Mechet in which it is told that in the city wall the dog was encased. The interpretations of Kazakhs about four-eyed dogs are the myth on the dog of the tsar of the vedic tsardom of the death of the god Yama. Zoroastrians believed that the dog defends from the spoilage, bad eye and evil spirit. Kazakhs relate to the dog many other customs and beliefs about which I would tell you in the next article.
Material was prepared by Miras NURLANULY
Use of materials for publication, commercial use, or distribution requires written or oral permission from the Board of Editors or the author. Hyperlink to Qazaqstan tarihy portal is necessary. All rights reserved by the Law RK “On author’s rights and related rights”. To request authorization email to or call to 8 (7172) 57 14 08 (in - 1164)
Қазақша Русский English
THE MOST WIDELY READ
Month Year
Top 10 national dishes you should try in Kazakhstan Master class was organized for the workers of the National Museum of the RK at Botay settlement Jewelry art Women that left trace in the history of Kazakhstan Kazakh yurt – a house without corners The great Kazakh scientist-educator, historian, ethnographer Shokan Ualikhanov was born Kazakh wedding traditions: uryn kelu Cultural walk: Museum of Turkic Academy The story of one photo. Nikolay Panin Address of the President of the Republic of Kazakhstan. Expert opinion – B. Ayagan Cultural walk: in the footsteps of the Hero of the Soviet Union Timofey Pozolotin They proved that Kazakh Art was important for them
Philosophy of the Emblem President of Kazakhstan took part in the opening ceremony of celebrations dedicated to the 175th anniversary of Abai Kunanbayuly Abdurakhman Aitiyev and his struggle Nurmukhan Zhanturin. Actor who played himself Ydyrys Mustambayev. Defender of Abai and Magzhan Online documentaries Kassym-Jomart Tokayev sent a telegram to UN Secretary General António Guterres History of pandemic in Central Asia THE GREAT SON OF THE GREAT STEPPE What was the composition of the country’s Supreme Soviet of the XII Congress Armenians and their kinship with the Kazakh people Nurtas Ondasynov. Kunayev’s Chief
Polls
Materials on the topic
Labels of the Golden Horde khans and Russian clergy
From the story of a blood feud
A role of Buddhism in formation of Central Asian mythologies
The referendum on the Constitution is a significant stage of democratization