“Traditional life in the steppe”: outfit of kusbegi (falconer) 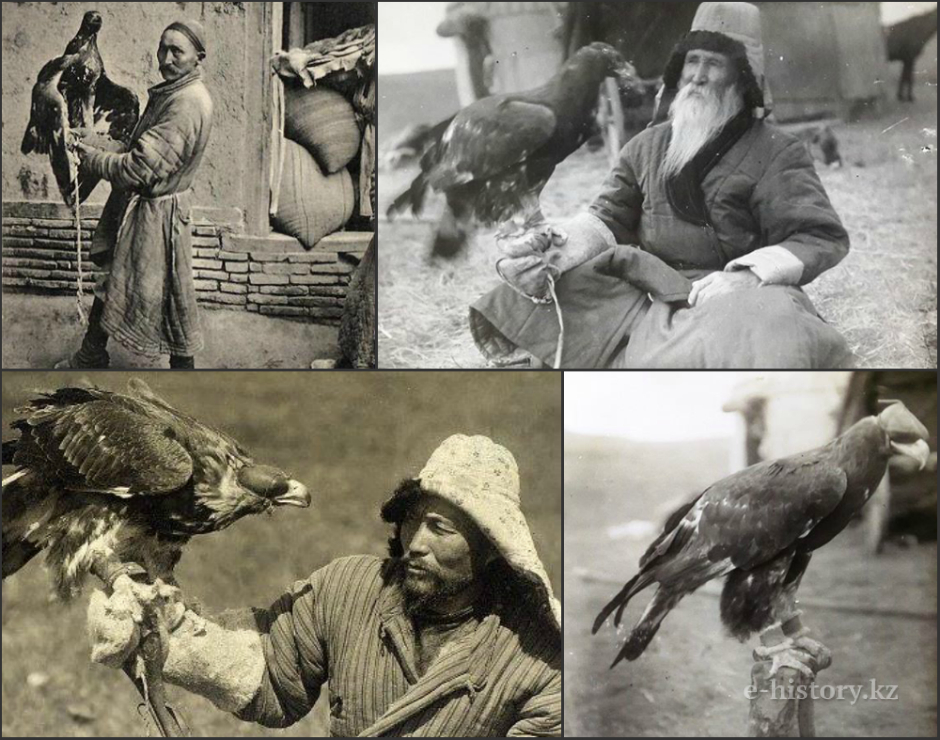 Bird hunting required not only a masterly approach, but also a special selection of the outfit

Every kusbegi should have an additional equipment: a knife, a noose, a pike pole, a screwdriver, a shilik, an armlet, a hook, et cetera. Shilik is a pole from the trunk of the young willow, helps to pull a fox, a corsac or a wild cat out of the hole. The pole is pushed with a split end to the hole, stab the beast with power, twirl to wrapp the beast’s hair on the pole and pull the prey out of the hole. This method is called “to pull out with the help of shilik”. In order to get it over with the fox, it is pressed to the ground with the armlet by the neck. Kusbegi wears hunting belt with various rings and pockets over the clothes. It serves for carrying knives, rope, flint and other supplies of the hunter.

But the basic equipment which is necessary for kusbegi during the hunting is a gaiter, a pauldron, a stock, cradle, feathers, claws, a glove, a stand, a katyr, a feed bag and a belt for trophies.

Gaiter (ayakkap). The bag, which is made of animal skin or weekly foal skin. During the period of many day-long hunting away from housing it protects the limbs of the bird from freezing and also protects the paws of the eagle from the beast teeth, that makes fierce resistance. It is necessary to put the gaiter on the young nestling for the first time of breeding. Gaiter is cut by the size of the four claws of the eagle and it is wadded by the soft thick cloth inside, the edges are sewn with a silk thread. Sometimes ayakkap is sewn in the form of four-fingered glove or mitten with high flare. The holes are made for claws in the pauldron and laced from the middle to the end. If strong or sly predator such as a fox, biting the claw of the eagle in a rage hurts or pulls it off, it is possible to replace it with artificial silver claw. The harmed bird is called “zheztuyak” (cuprous claw) in order to smooth sensitivity. The movement of such a bird is deprived of its former dexterity in the capture of the beast or in the fight against it. There is an evidence that experienced kusbegi set claw of the dead eagle instead of the dropped claw.
Cradle (kundak) It is a round basket, woven from willow to swirl the bird. Cradle protects the feathers of the eagle from fracture and protects from cold, snow and rain. There are several types of it: woven from young willow twigs in the shape of a bird feeder, rounded; wooden, hinged; made from felt with ribbons. Tired and frozen bird after hunting is swaddled like a baby, placed in a cradle and is wrapped with belt stripes. Also, the eagle is carried in it during the trips over the long distances. 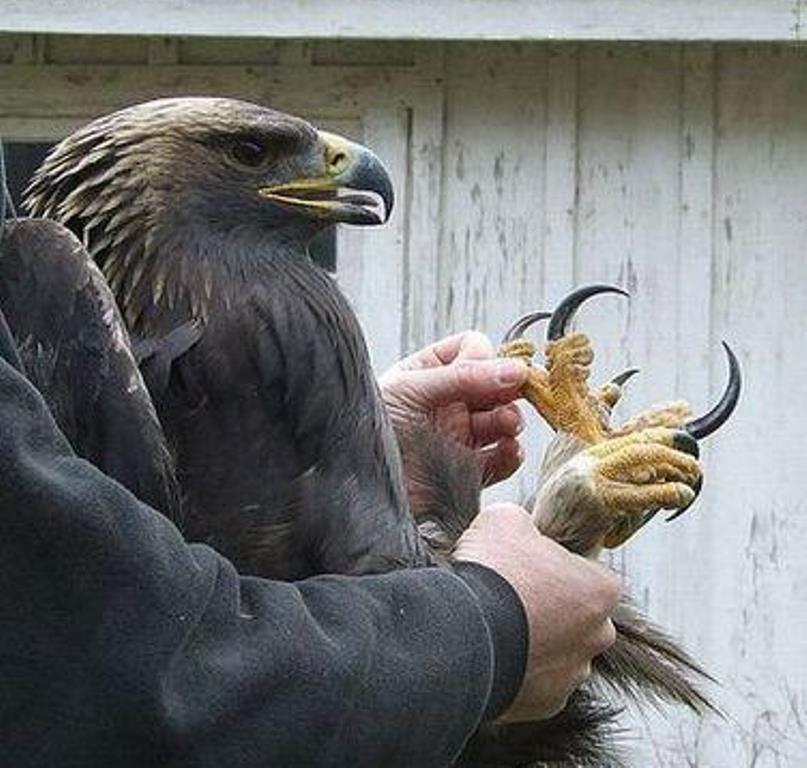 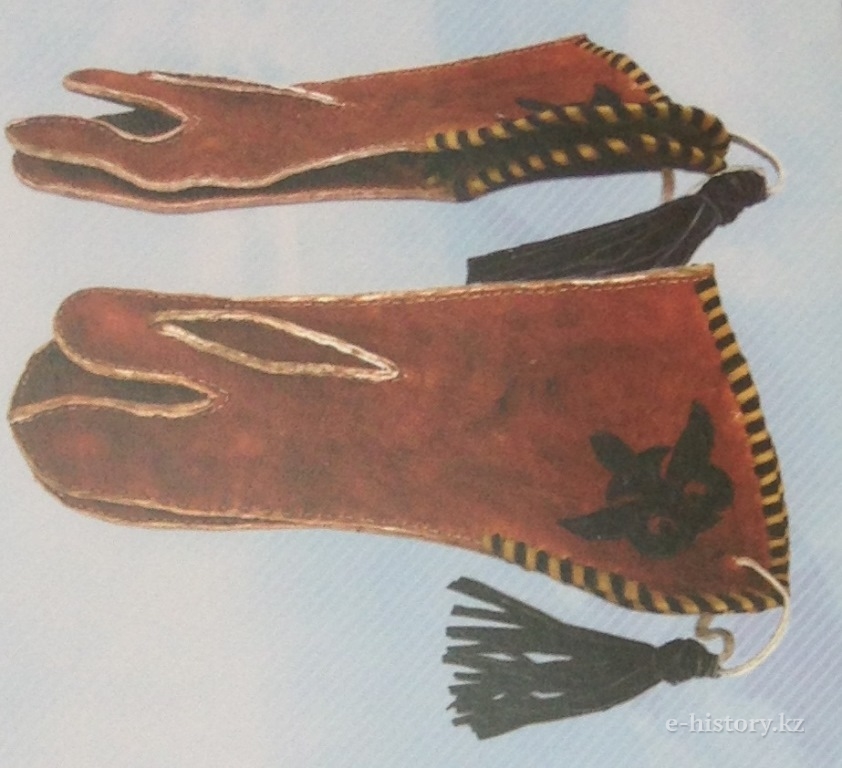 Mitten (biyalai). It is the glove worn on the right hand of berkutchi. It can be five and three-toed. The mitten is designated to carry the bird on the hand and mortification of the sullen bird. It protects hunter’s hand from the sharp and powerful claws of the eagle. Biyalai encourages for comfortable and stable seat of the bird on the hand. Three-toed mitten made from soft leather tanning is sewn for small hunting birds. 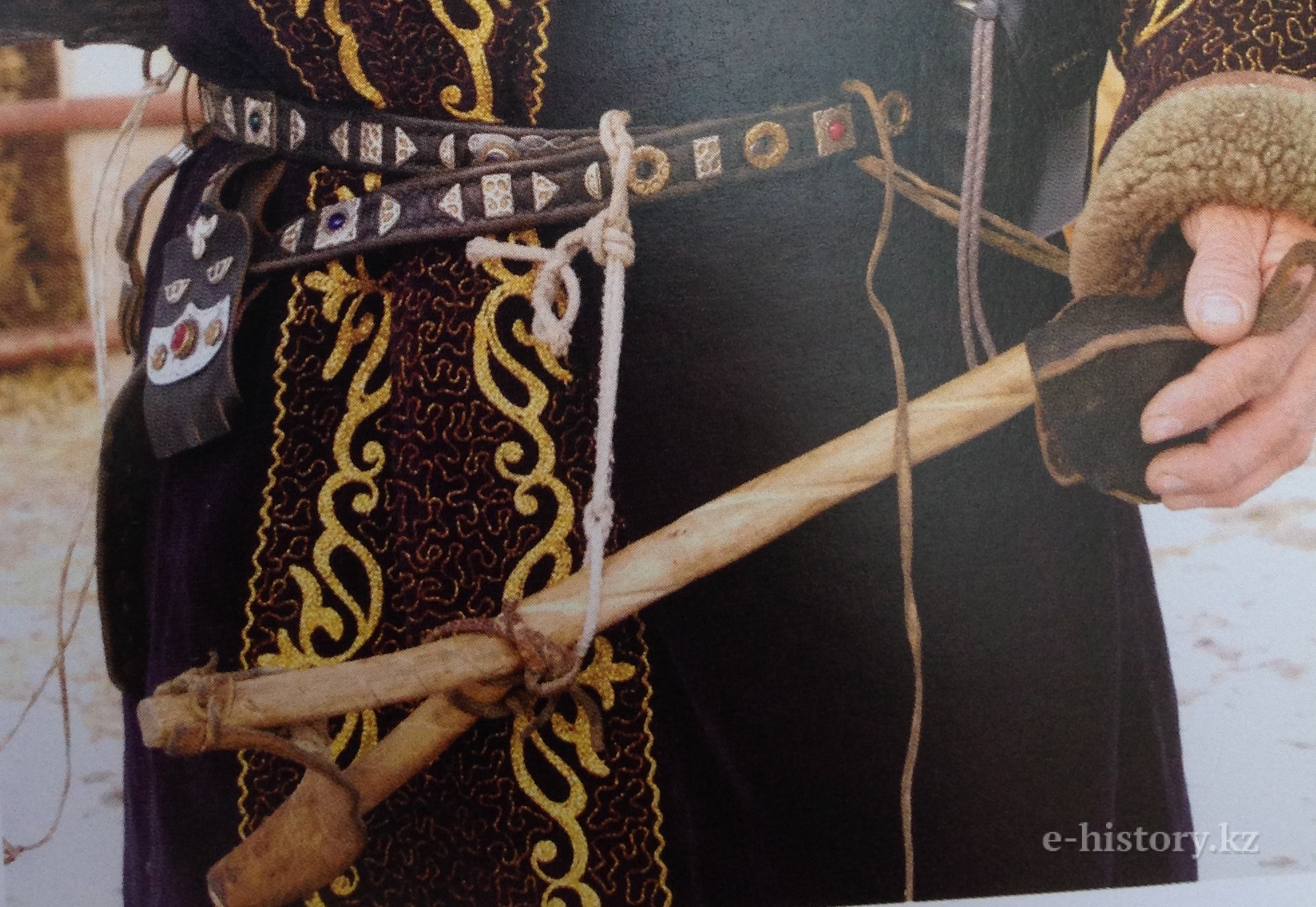 Stand (baldak). It is a special appliance for comfortable hand position during the horse riding with the eagle. It is a stand under hand in the form of sling. A rounded “leg” is fixed for stability to the lower end of the stand and the strap-buttonhole (buldyrge bau) is passed through it. It serves for fixing the stand to the ring of the saddletree. Ortabau (middle strap), which attaches baldak to the pommel of the saddle or special stub in the front seat area is passed through in the middle part of the stand. They provide stable position of the stand during the hunting.

Tomaga — a leather cap, worn on the head of the bird to protect from attempts to attack other people and domestic animals.

Pauldron (iykkap) — an equipment to protect humerus of the bird from the cold. A bird with frozen shoulders can be chilly and quickly loses energy and may fall under disease “kurt kanat” (literally “grubby wings”) called by berkutchi. Experienced berkutchi of the northern regions sew iykkap from the felt, wad with cloth and decorate with a rich weave. Pauldron is thrown on the “shoulders” of the bird and attached to the wings with the help of a thick thread. The pauldrons can be distinguished as zhauryn iykkap (shoulder pauldron), zhabasalma iykkap (pauldron-cloak), kosaktauly iykkap (dual pauldron) depending on the cut and appliance.

Palatal stock (tandaiagash) — a tool “to discipline” the bird. Tandaiagash is attached to the beak of the eagle, not to frighten the game off by his squawk. It has the form of the usual scoop, hewed out of a piece of wood. It is passed under guttural strap of the cap and the loop is worn on the beak of the bird from another end. It looks like a halter. When the eagle tries to squawk, it gradually leaves trick unable to overcome the obstacle, which tightly close his beak. Some kusbegi have simplified finger-sized palatal stock. It is always in the cap. 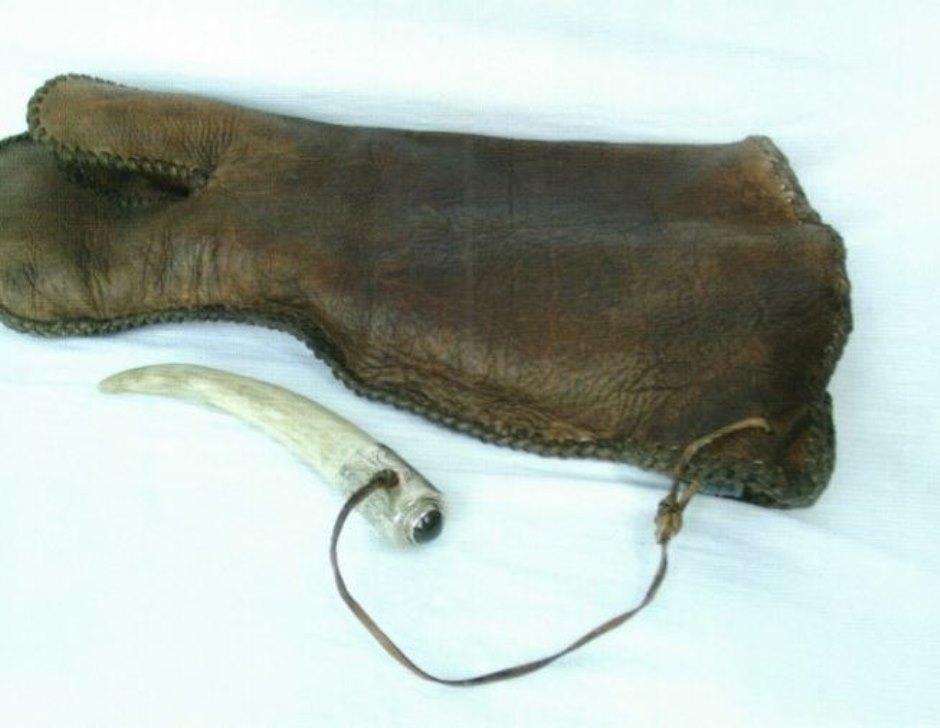 Katyr. It is an appliance in the form of awl. Katyr is used in order to kill the animal taken by the eagle quickly, save the animal from unnecessary suffering and to protect paws of the bird from the predator teeth. It is tied to mitten or hung near the saddle at hunting. When the eagle takes its prey, berkutchi runs up to it and plunges katyr forcefully into the animal. 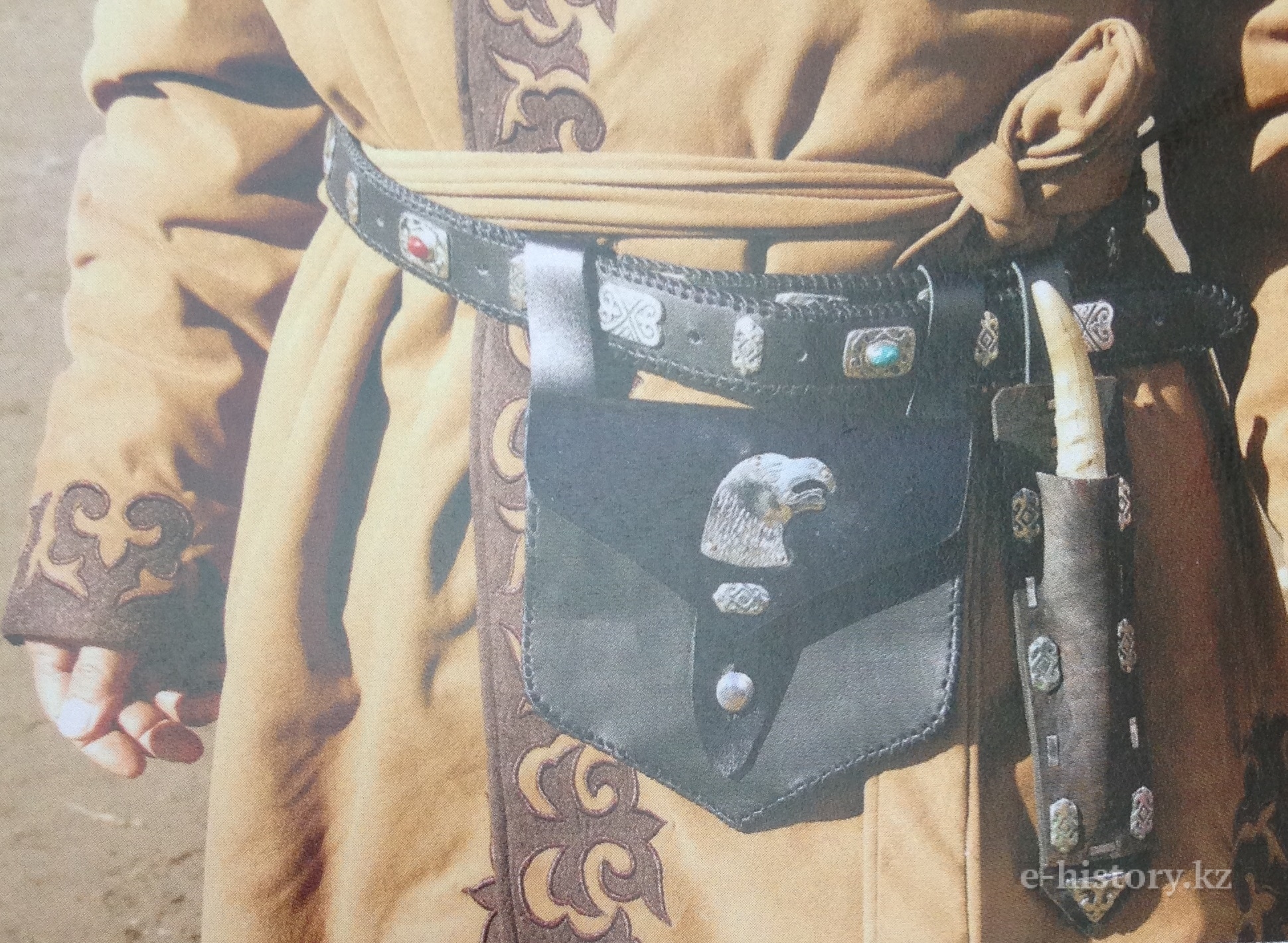 Feedbag (zhemkalta) is a bag of clean thick felt, where the hunter carries food for an eagle during departures for a long time. The pocket for tube is provided from the one end of the bag.

The trophy belt (belkanzhyga) is an equipment to wear hunting trophies on the belt — hares, ducks, pheasants, and et cetera. It is knitted from the solid, rawhide belt and metal rings are attached to the end of the weavings. Hooks, which are clung on the rings of the waist belt are passed through the rings of the upper part of the weaving. Small game is tied by the paws to the rings with ribbons by the lower edge.

Use of materials for publication, commercial use, or distribution requires written or oral permission from the Board of Editors or the author. Hyperlink to Qazaqstan tarihy portal is necessary. All rights reserved by the Law RK “On author’s rights and related rights”. To request authorization email to mail@e-history.kz or call to 8 (7172) 57 60 13 (in - 1163)
Қазақша Русский English
MOST READ
Month Year
Kazakh historical drama Tomiris premiered in Istanbul
ALASH IDEA IS THE PROTECTION OF KAZAKH STATEHOOD
Stolypin about the worries and hopes of immigrants to the Kazakh steppes
A tireless explorer of the Kazakh land
SWITCHING TO THE LATIN ALPHABET – UNITE ALL KAZAKH PEOPLE
Kunaev Dinmukhamed Akhmedovich
People who eat horses will kill you
Kazakhstan's participation in the Winter Olympics has a long history
Rebooting a field of science and education
Recorded history of Kazakhstan. Part 1
Historical Dates on the Bosphorus
Recorded history of Kazakhstan. Part 2
Materials on theme
Police Dynasties– the Guardians of Law and Order in the family
A book about Nursultan Nazarbayev presented in Moscow
The Story of One Photo photography exhibition
A bit about the Old Turkic script