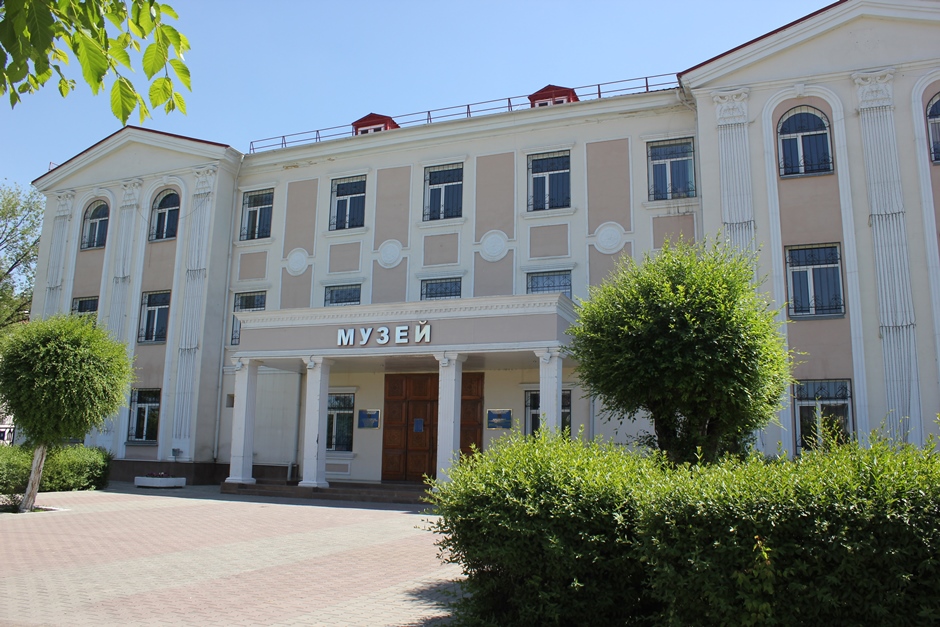 Zhambyl regional history museum was opened on August 25, 1931 as a municipal museum. The most valuable exhibits were the subjects of archaeology. At that time museum occupied a small building of two exhibition halls with a total area of 328,5 sq. m. In the 40s of the last centenary museum acquired status of regional one. In the middle of the 70s of the last centenary Zhambyl regional local history museum was included to the All-union tourist route, since 1977 groups of foreign tourists have begun to attend it. In 2002 there three new pavilions were opened in the museum: “The museum of ancient Turkic writing and ancient Turkic stone sculptures”, history museum of the city “Taraz — 2000” and L. V. Brummer Museum of Art to the 2000th anniversary of Taraz. Thus, Zhambyl regional local history museum is a museum complex with total exhibition area of 2010 sq. m. There are about 4000 depository items (exhibits) in the funds of the museum, the number of which increases from year to year. They are historical, archaeological collections, historical and household objects, manuscripts and printed documents, works of fine and decorative art, numismatics and et cetera.

The main building of the museum complex

It opens the exposition of the Department of Nature of the museum. The introduction begins with a map, where location of the region on the territory of our country is shown with its peculiar forms and topographic features. The sea appeared and disappeared thrice on the territory of South Kazakhstan in geological past. Remains of marine organisms belonging to the Carboniferous period-clams, corals, trace of fin and fish can be the evidence. Exhibits of the Saka period (8-4 centuries BC) which are kept in the museum: Saka warrior helmet, weapon fragments, bronze cauldrons on high pallets are of high value. The process of formation of the Kazakh khanate is reflected in the exposition of the next hall. Visitors are able to see the household items of the Kazakhs, military equipment of the period of Jungar wars — 17-18 centuries. Exhibits, showing the transformation of the region since the accession of Kazakhstan to Russia are demonstrated in another hall. A significant place is given to everyday objects and household items, clothing of the people, who have migrated to our region. Currency notes of the Imperial period collection of samovars and teapots of 19 century are widely presented. Many other exhibits, showing other periods of history that you should see, are presented in this building. 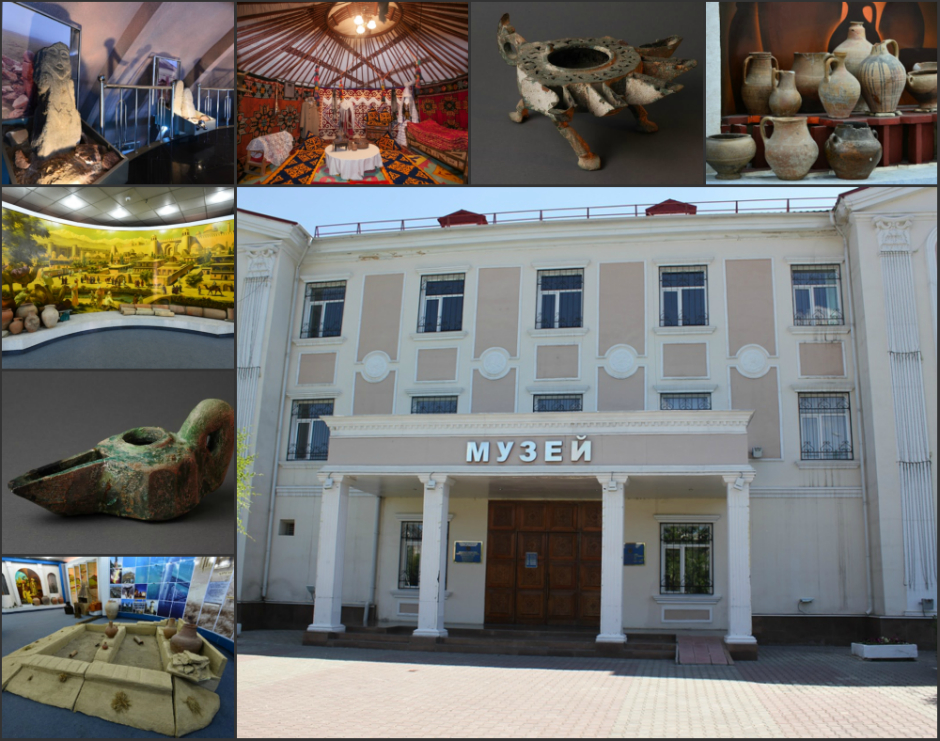 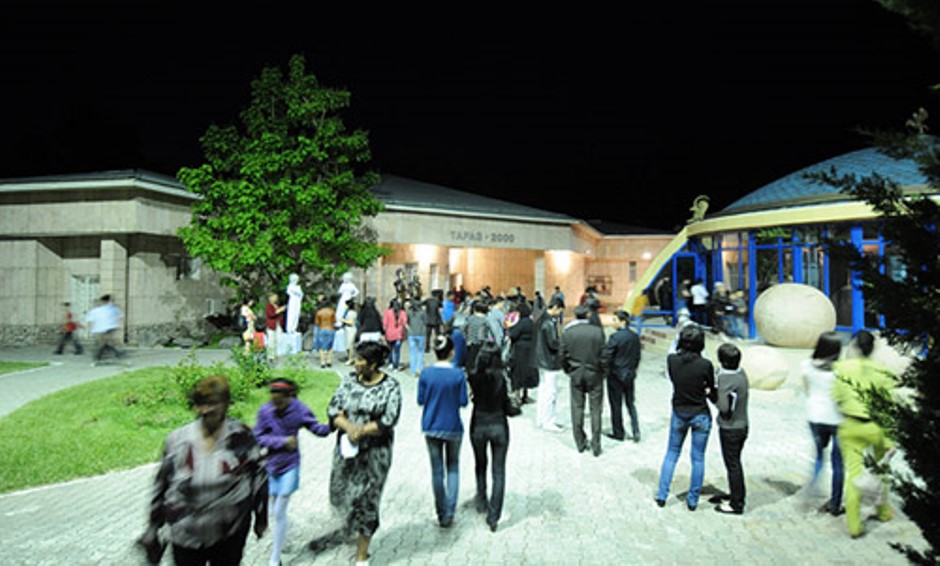 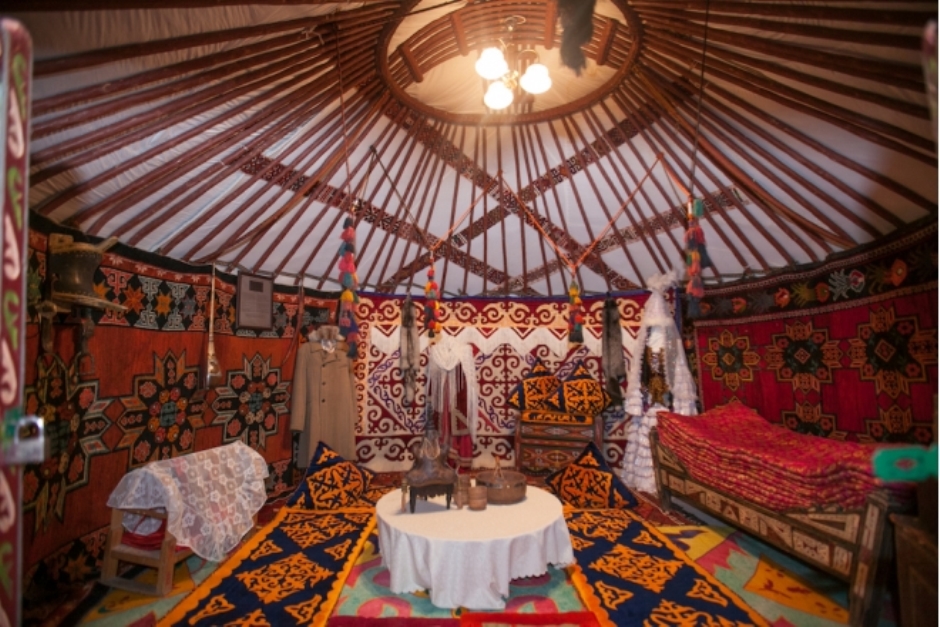 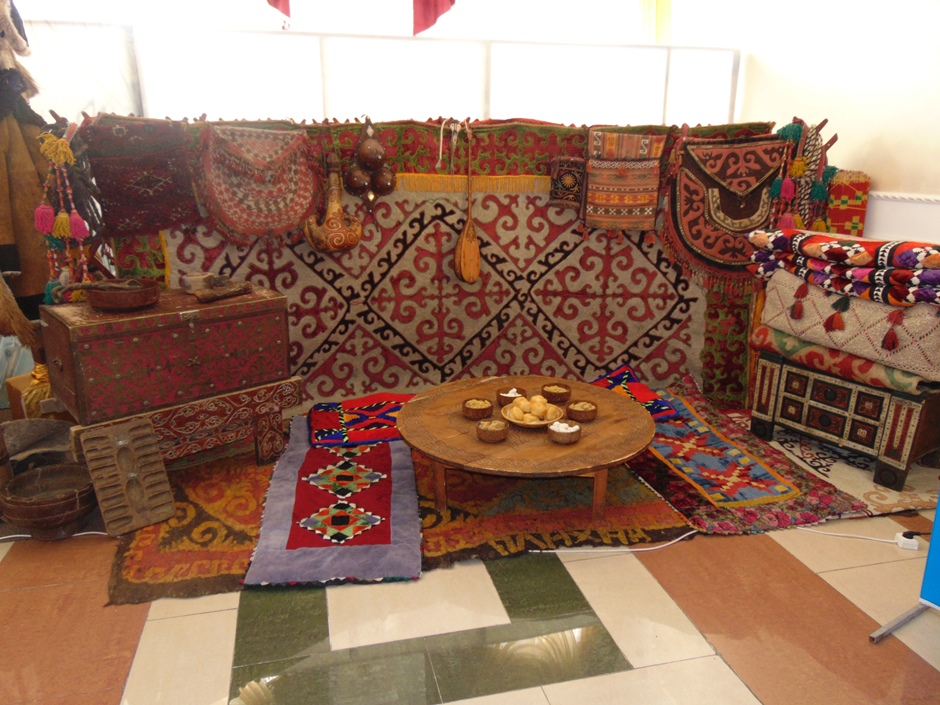 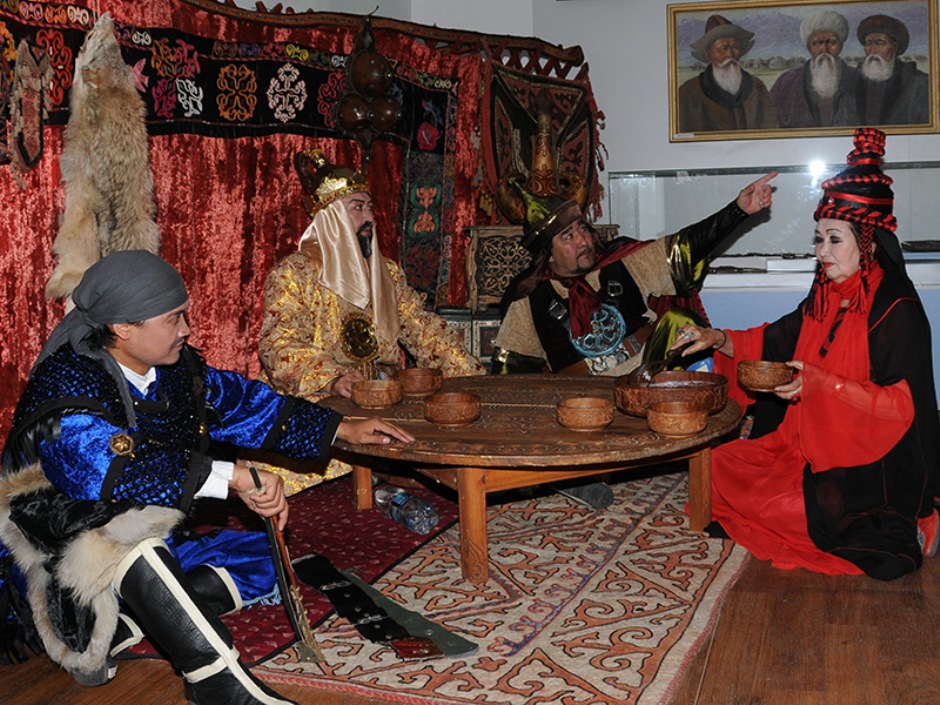 Museum of ancient Turkic culture This museum is unique not only in Central Asia, but also on the territory of the CIS. The samples of ancient Turkic literature and stone sculptures are presented there. The shape of the building is also unusual, dome-shaped, on the one hand resembling the Yurt, on other hand — a mound, where stone sculptures exposed in the museum can be met. Ancient Turks immortalized themselves by creating their own special kind of monumental art — stone statues. These silent witnesses of the distant past give visitors an insight about culture of the Turks during the domination of the Turkic Kaganate (6-8 centuries) and the state of Karluks (7-9 centuries). Ancient Turks embodied the image of deceased and deified ancestor in stone. The sculptures served as the object of worship and veneration. They were installed on the mounds with stone fences and were the places of worship and sacrifice. Culture of Turkic tribes is reflected in the monuments of writing. Samples of writing, referring to “Talas type” are placed in exposition of the museum. These are runic letters, lowercase characters on a silver bowl from the Issyk burial mound. Ancient Turks left notes not only on different objects, but also on the rocks. There are two stones with clear signs in the exposition, deciphering of one of them is still under research by scientists-turcologists. The copy of “Golden man” and a silver bowl with a runic inscription, indicating the high culture of the Sak tribes are presented in the museum. 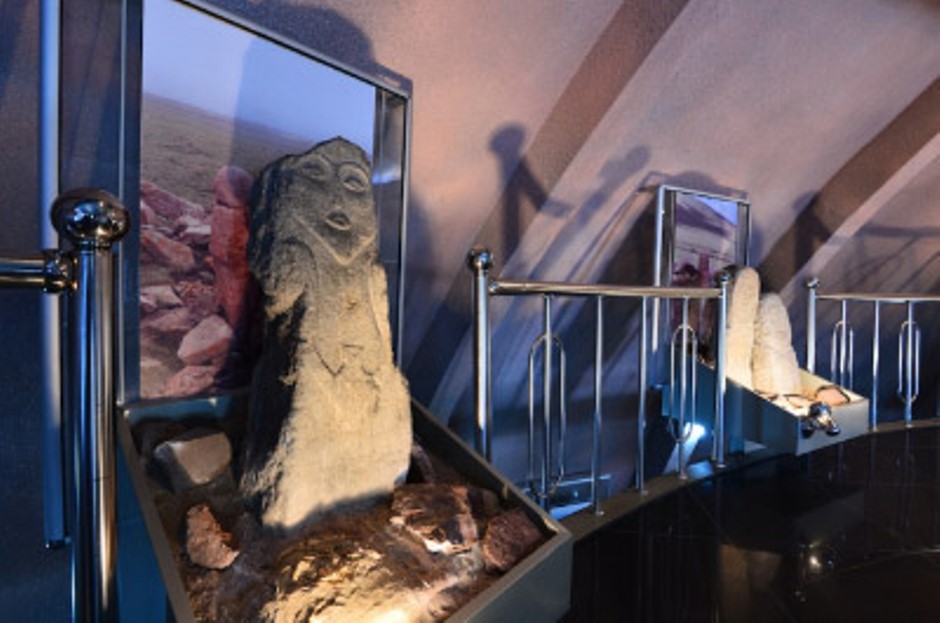 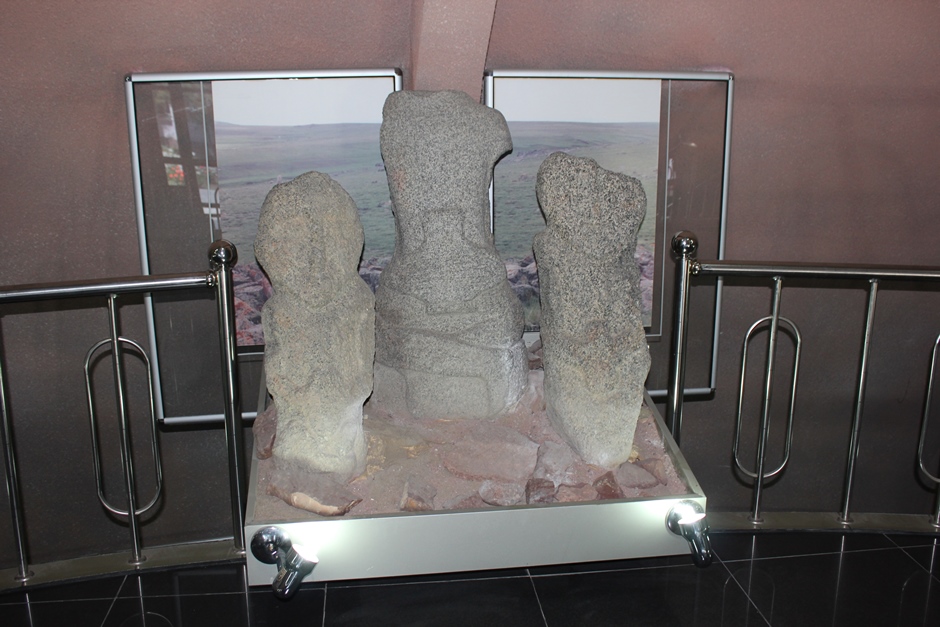 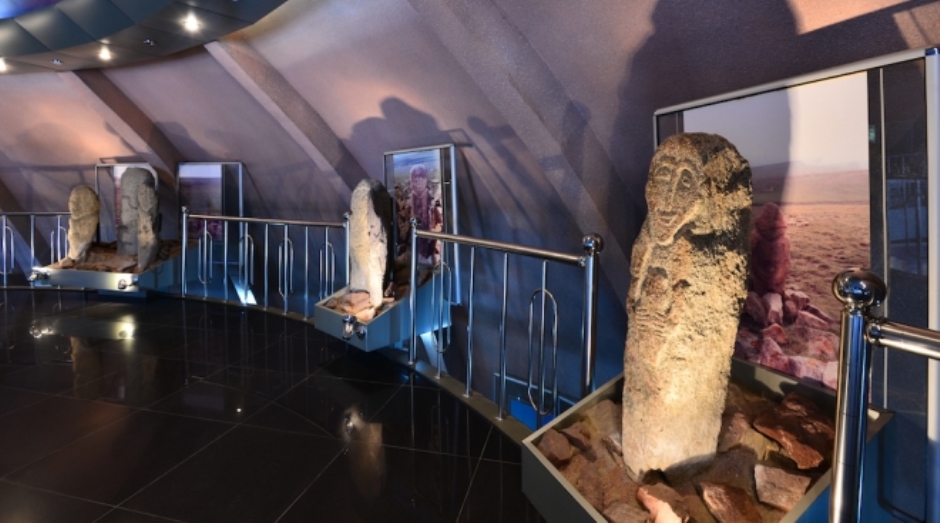 The most interesting collections of the regional museum are collections of ancient Taraz, which is more than 2000 years. History of formation of the city Taraz goes back to antiquity. The famous scientist-academician A. Kh. Margulan informs about the time of formation of the city: “...According to researches of scientists Savanna, De Grot, V. Bartold and many others, the Huns settled in the valley of the river Talas in the third-second centuries BC and built the city Talas with palaces and towers.” Numerous finds, extracted from excavations in ancient city Taraz offer new ways to highlight the history of the city. Taraz was a major trading center on the Great Silk Road from China to Europe. A lot of merchants from India, Central Asia, Iran, Iraq and other countries came there. Writers and poets, scientists and thinkers, missionaries and pilgrims were going from the east to the west, to the west from the east with caravans and shared religion, customs and culture of the peoples. There was a lively exchange of material and spiritual values. It was a capital of the Turkic Kaganate and later the Karluk Kaganate. The big collection of museum exhibits of Taraz period was in France, Paris, in the headquarters of the UNESCO in the year of celebration the 2000th anniversary of Taraz and made a great impression on the visitors. 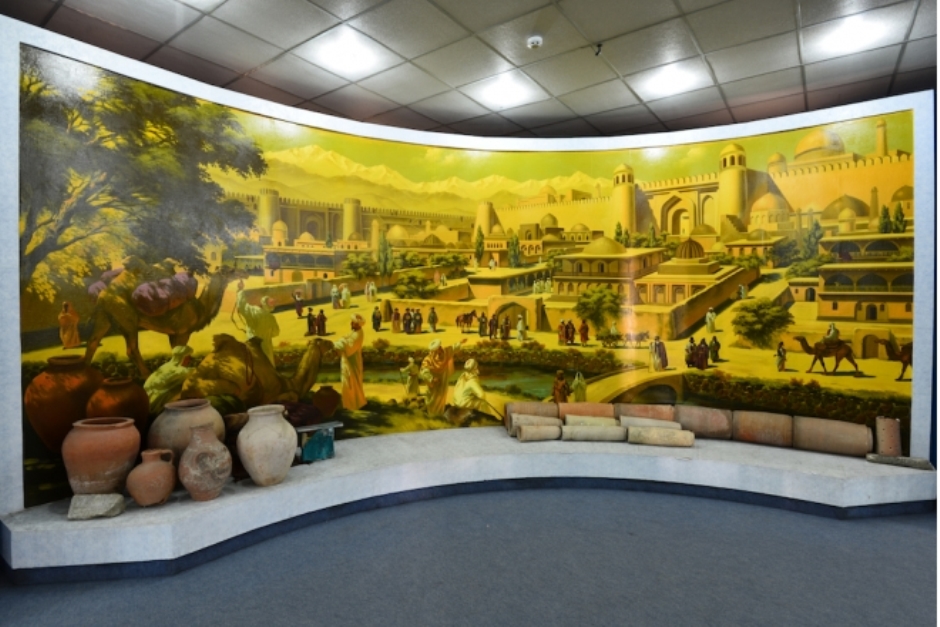 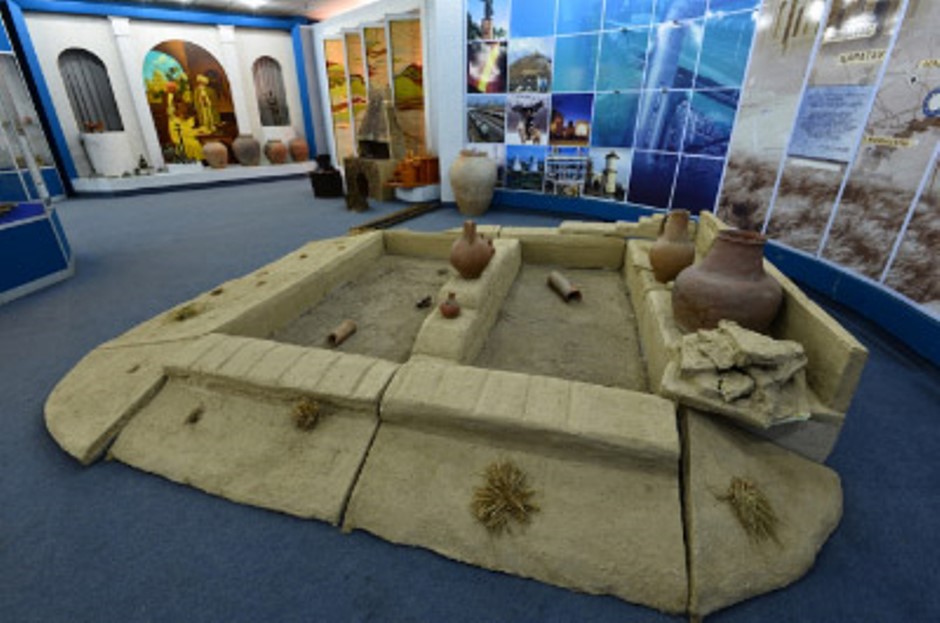 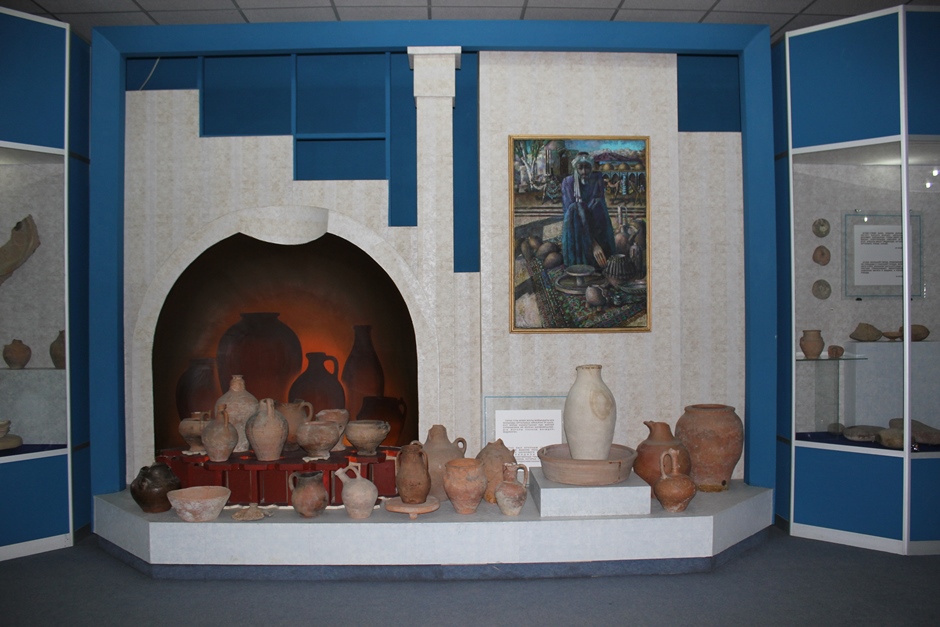 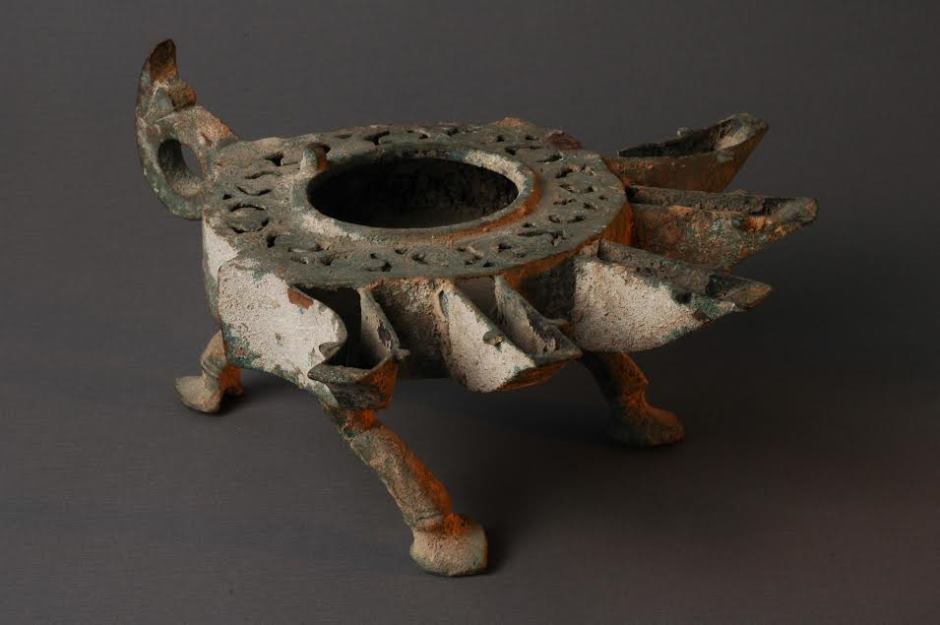 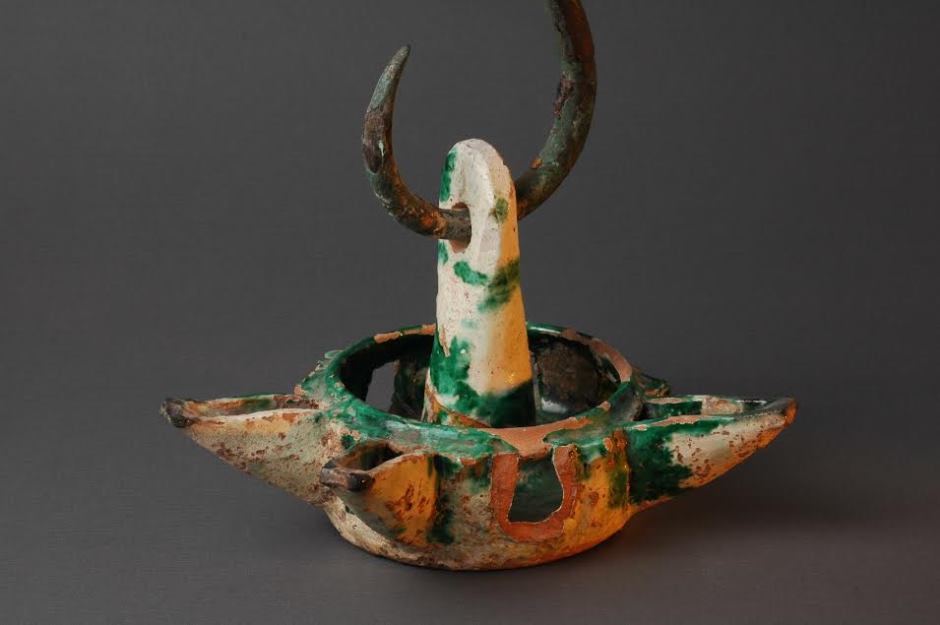 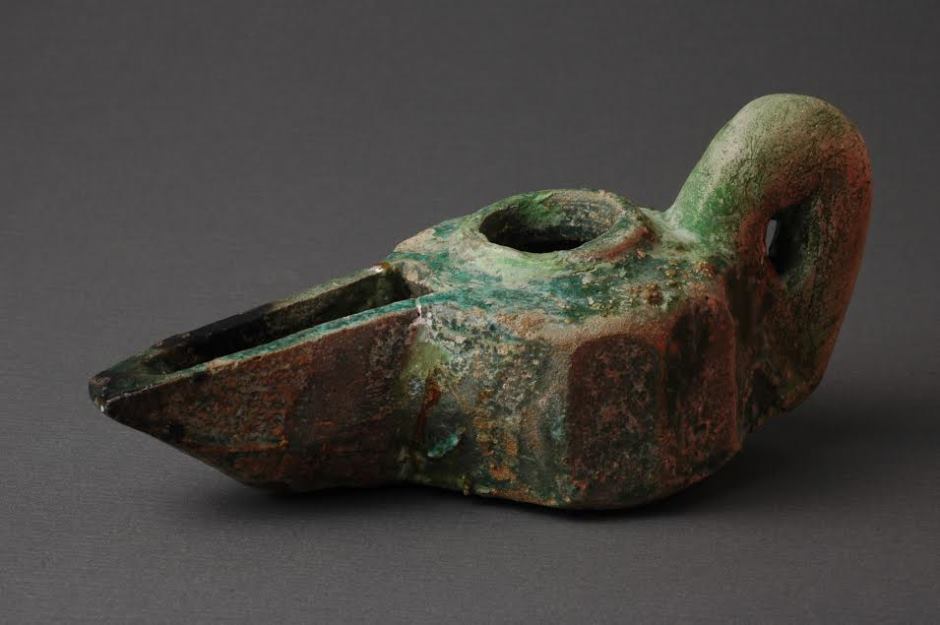 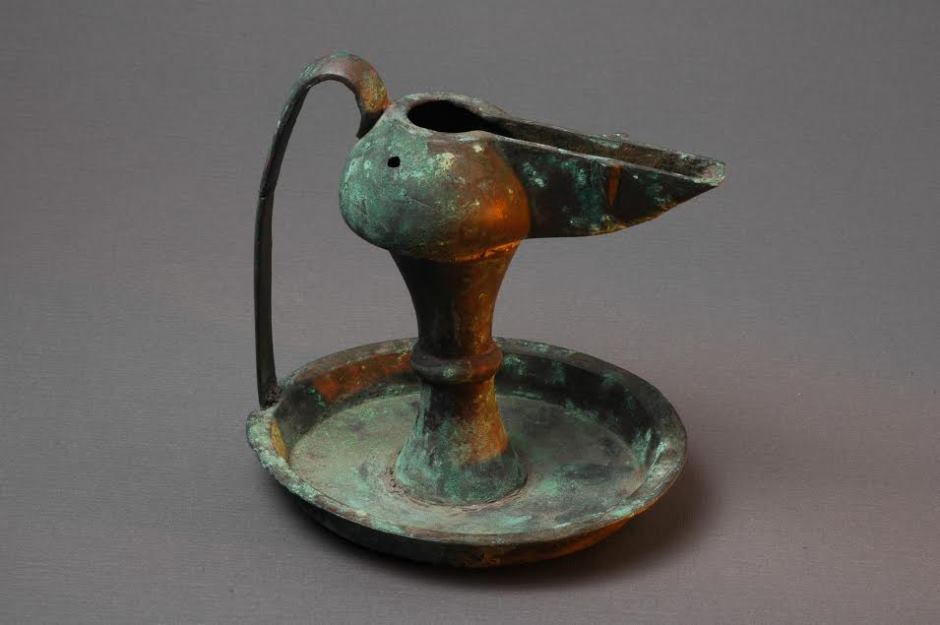 The lamp on the pallet

This is the third new museum of Taraz museum complex. It is dedicated to the creativity of the unique artist L. V. Brummer, who was repressed during the Second World War and exiled to Kazakhstan. The last 15 years he lived in Zhambyl (now Taraz) and all his entire collection of paintings (more than 1000) left to the city. Leonid Brummer was born in Ukraine, in Kherson city in 1889 in the family of Russified German von Brummer. His mother is French, M. Guttier. In 1915 he graduated from the art school with honors in Kiev. He studied at the Imperial Academy of Arts in St. Petersburg. He could not complete his education because of post-revolutionary events: poverty, the fight against “formers”. Brummer lived and worked in Yalta, Old Crimea, Orel, Nalchik. He was repressed from Nalchik in 1941 because of the German origin to Kazakhstan, Pavlodar region. He lived in Zhambyl (Taraz) from 1955 to 1971. This museum is unique by the fact that there a large number of paintings of one artist is collected. 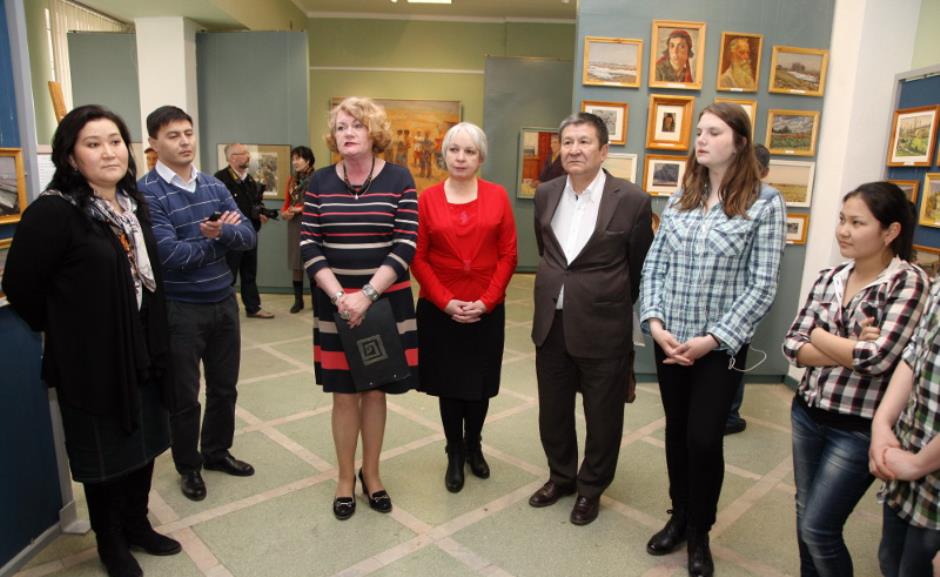 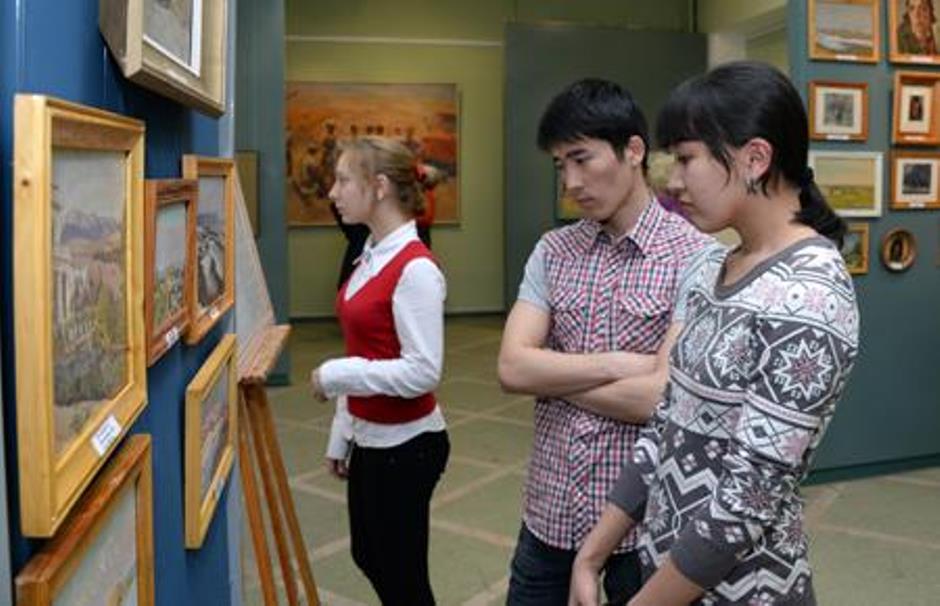 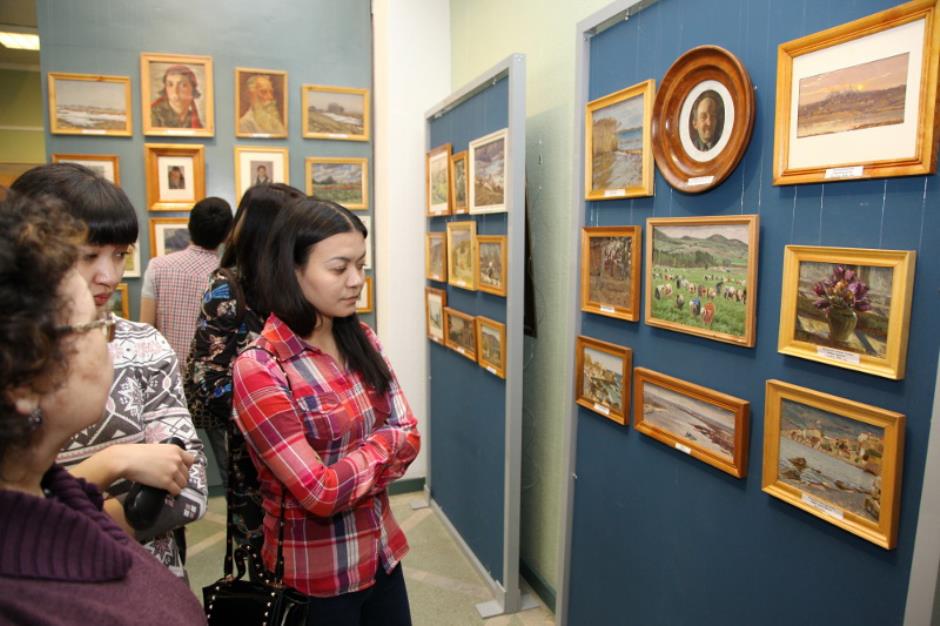 Our appreciation to Zhambyl regional local history museum for the presentation of material.

Materials on theme
History of the Day of unity of people of Kazakhstan
Arable land hided the unique burials from archeologists for 60 years
Borte. Behind every great man there is a great woman
The results of the competition “Your Vote – Your Future”