The "Atyrau throughout centuries" exhibition 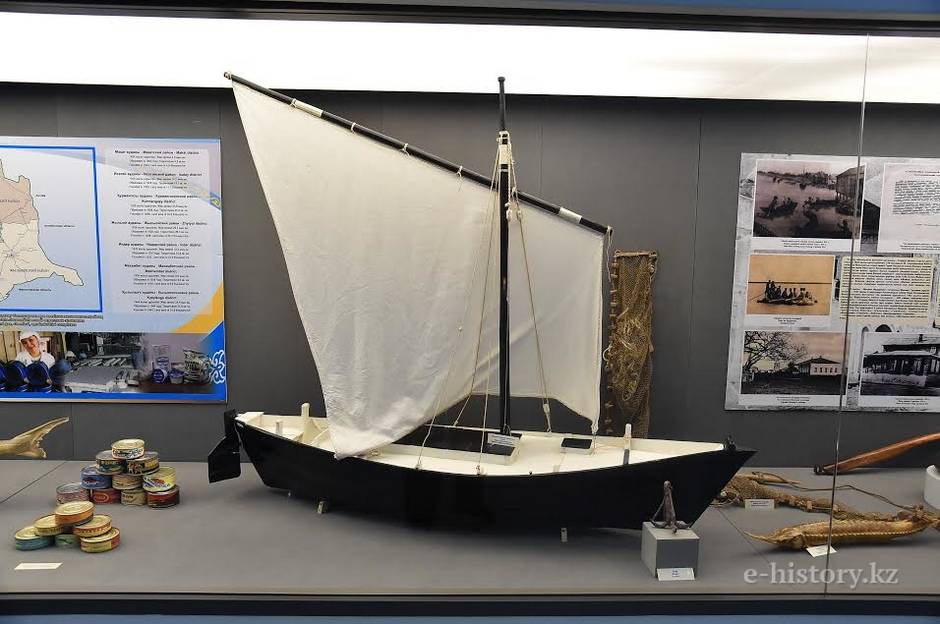 The exhibition is aimed at demonstrating the collections of the Museum of Local History and the Museum of Visual and Applied Arts named after Sh. Sariyev of Atyrau region. The event is organised within the "Kazakhstan throughout centuries of history" project. The opening ceremony took place at the National Museum on 24 July 2015.

In his opening remarks the Director of the National Museum of the Republic of Kazakhstan Darkhan Mynbai said: "We believe that the exhibition will attract the interest of the residents and guests of the capital city. It’s known that the famous Saraishyk settlement is located not far from Atyrau. Saraishyk was the capital of the Golden Horde. And each ancient artefact and even a piece of stone from this region can tell about Kazakh history. This region is well-known for its scientists, heroes and wise men. We should work hard to make them known not only in Kazakhstan but worldwide. Exhibitions like this will contribute to deeper teaching about our national history and culture." It’s noteworthy that Atyrau region is a part of the Junior Zhuz and possesses a lot of interesting historical facts about legendary khans Abulkhair (1693-1748) and Bukei, the founder of the Bukei Horde, national hero Syrym Datov, and leaders of the national liberation movement Makhambet Utemisov and Isatai Taimanov. The exhibition organisers will demonstrate a maquette of sultan Beibars, a ruler of Egypt, who, in the view of some experts, was born in this region.

The Deputy Mayor of Atyrau region Shyngys Mukan thanked the National Museum for the organisation of the exhibition: "The National Museum is not only an attraction of Astana. It is also a pride of the whole nation. We used to see dusty exhibits at museums, but this museum is full of life."

The "Atyrau throughout centuries" exhibition gives an opportunity to learn more about the history of the city of Atyrau, the nature and natural recourses of Atyrau region, and see photos and golden jewellery of the Golden Man that was discovered in Zhylyoisky area in the site named Araltobe, pots and ceramic vessels dating from the Sarmatian period. The exhibition includes coins, necklace, bronze mirrors, and candles discovered during the archaeological excavation in Aktobe settlement and Saraishyk medieval town. Among the most significant exhibits are maquette of sultan Beibars, famous military commander, statesman and ruler of Egypt, North African Mamluk pistols of the 17th — 18th centuries, ethnographic crafts and 60 pictures from the collection of the Museum of Visual and Applied Arts named after Sh. Sariyev.

The "Atyrau throughout centuries" exhibition will remain at the National Museum of the Republic of Kazakhstan until September 2015.

Use of materials for publication, commercial use, or distribution requires written or oral permission from the Board of Editors or the author. Hyperlink to Qazaqstan tarihy portal is necessary. All rights reserved by the Law RK “On author’s rights and related rights”. To request authorization email to mail@e-history.kz or call to 8 (7172) 57 60 13 (in - 1163)
Қазақша Русский English
MOST READ
Month Year
Kazakh historical drama Tomiris premiered in Istanbul
ALASH IDEA IS THE PROTECTION OF KAZAKH STATEHOOD
Stolypin about the worries and hopes of immigrants to the Kazakh steppes
A tireless explorer of the Kazakh land
SWITCHING TO THE LATIN ALPHABET – UNITE ALL KAZAKH PEOPLE
Kunaev Dinmukhamed Akhmedovich
People who eat horses will kill you
Kazakhstan's participation in the Winter Olympics has a long history
Rebooting a field of science and education
Recorded history of Kazakhstan. Part 1
Historical Dates on the Bosphorus
Recorded history of Kazakhstan. Part 2
Materials on theme
The Kazakhstan divisions which fought in the Great Patriotic War
New documentary film about the President of Kazakhstan presented in Astana
10 historical and tourist sites of Kazakhstan
Trade fair “Oner Fest”