Home News Alibi Dzhangildin, the first Kazakh to travel around the world

Alibi Dzhangildin, the first Kazakh to travel around the world 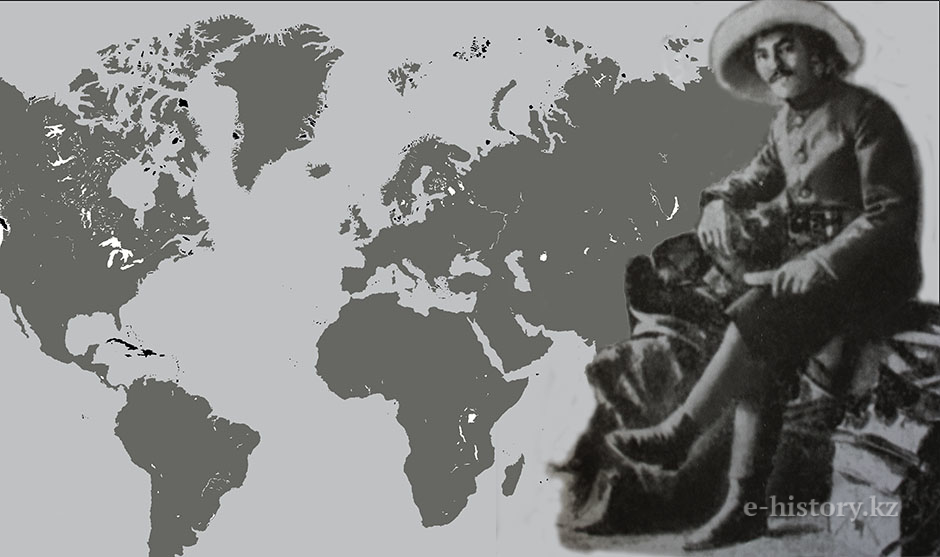 Alibi Dzhangildin was born in 1884 in the place called Kaidaul, Turgaisky province (now Kostanai region). His father was a farm labourer. He was a representative of the Middle Zhuz, the Kipchak clan. The family had eight children, including three sons and five daughters. It was a poor family.

At an early age, Alibi strove for knowledge, but there were no schools in that place. Once, a teacher of the Turgai School for Craftsmen passed through the village. Talking to Alibi he found his potential for memorisation and cognition and invited the boy to enter his school. The conversation with the teacher impressed him. When Alibi shared the idea of studying with his father, the man didn’t support him. Young Alibi decided to run away from home and waited for an opportunity to do this. He went away secretly with a caravan that moved to Turgai from neighbouring village. In Turgai Alibi found that teacher, Akhmet Balgambayev. He was the Head of the Russian School for Craftsmen. Thus, the young traveller received literacy training.

Alibi’s strong desire to learn what the life outside his native village and far away from the great steppe was, painful perturbation particular to young people, possible mistakes and misconceptions in the search for truth led him to his early independent and religious life. And later in the atmosphere of big cities (Kazan, Moscow) where the youth rejected old to find new, the temperament and energy motivated him to make adventurous decision to travel around the world.

The future Extraordinary Commissar of the Steppe region Alibi Dzhangildin became the first Kazakh to do this. This trip established the worldview of this man who was the creator of his destiny and creator of his country. Alibi saw and realised the scale and diversity of the big world which combines luxury and wealth with poverty, permissiveness and injustice. The very experienced and self-confident person with firm views and beliefs returned to the native steppe. Alibi understood that people have to struggle for their independence, freedom and best life.

The journey in brief.... 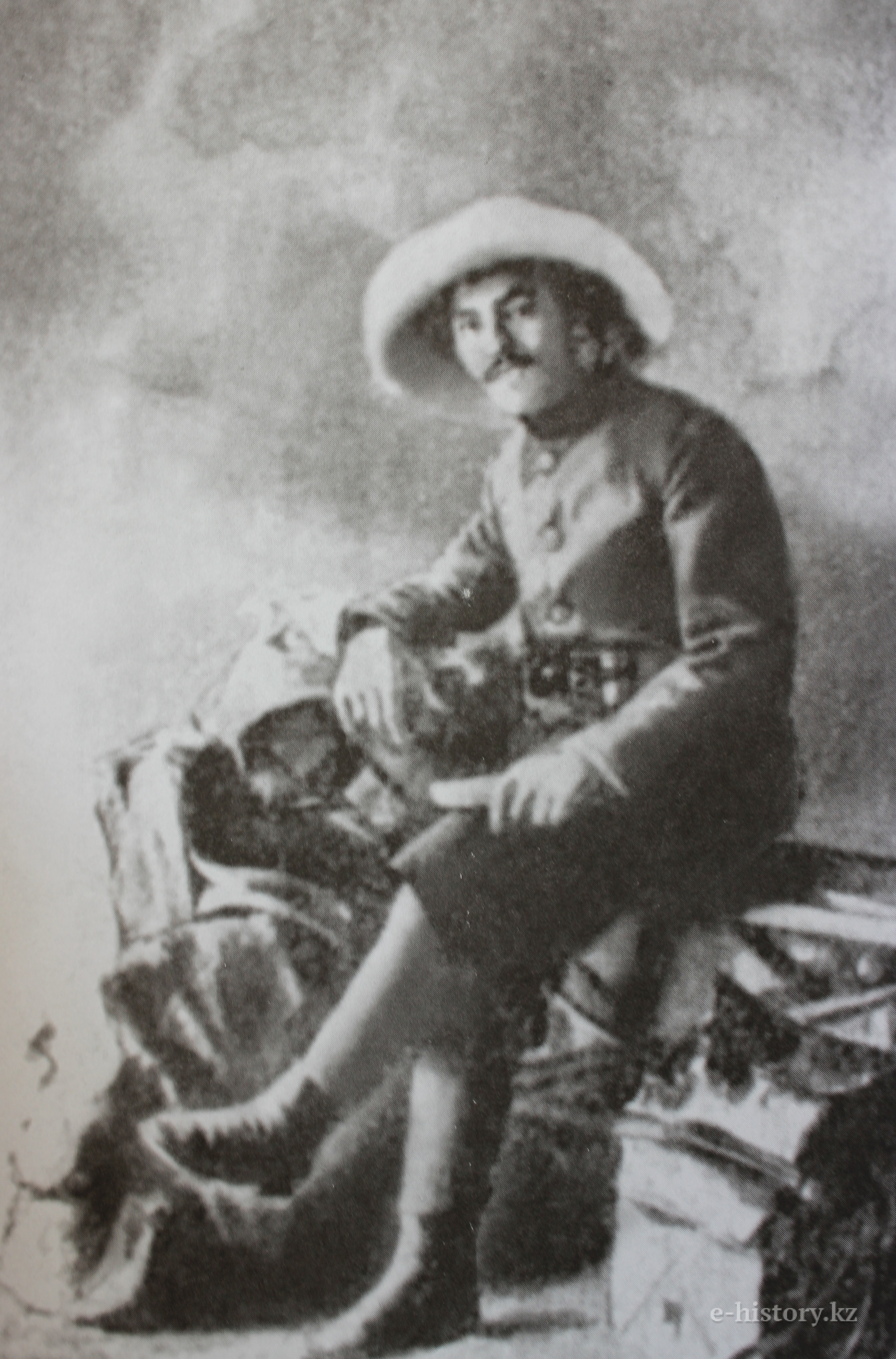 Alibi Dzhangildin during the travelling around the world

He published the announcement inviting companions to travel around the world by step. The three man responded to that invitation: teacher of Natural History Plamenevsky from Samara, engineer-technologist Polevoy from St. Petersburg and lecturer of the Moscow Commercial College Korovin. Several days passed and the group gathered together. They were young and full of energy. Straight away in July 1910 they went from Moscow to St. Petersburg on foot. It took them twenty days to reach the city. They spent four days there. Their photos with brief and short report were published in local newspapers and when they continued their trip crowds of local residents accompanied them walking five versts on the Peterburi road. 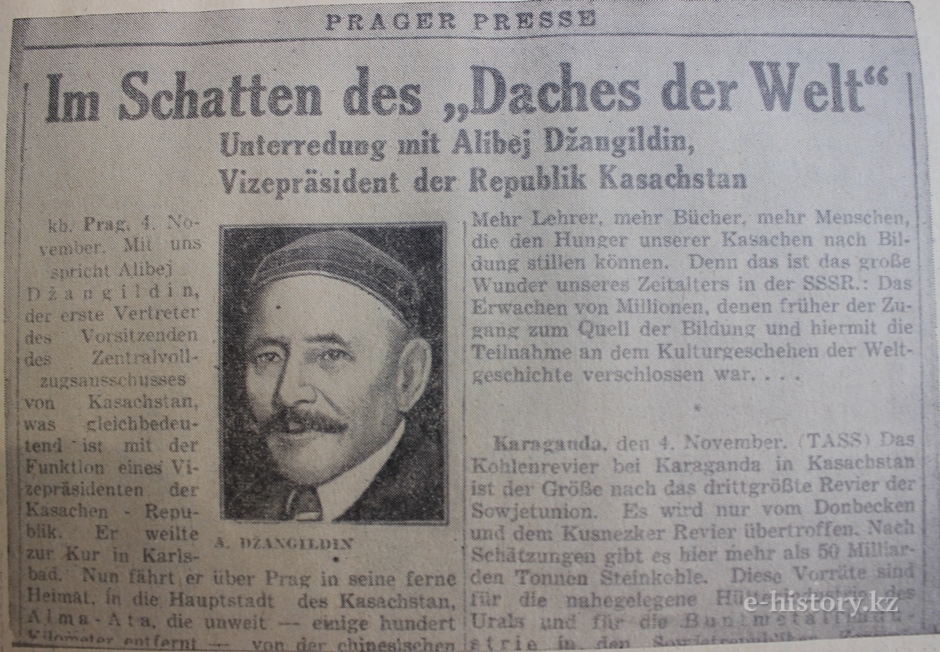 The travellers walked forty-fifty km a day. Initially, they went slowly without any rush but later became hardened and moved faster. To earn some money and buy the food, they conducted pay evenings and delivered lectures. People welcomed them warmly everywhere. Then when Alibi was abroad he earned his living using the camera. People bought thousands of photos of Alibi Dzhangildin.

The travellers didn’t have any special sporting purposes. They needed to find livelihoods and not just migrate abroad but travel around different countries and see their landmarks. The trip around the world took around four years.

"I walked twelve kilometres on foot with my camera, not to mention travelling by sea and train. During the day, I took photos of those places where I walked and at night developed photographs. I delivered lectures, made reports and sold photos to earn money. I travelled through Poland, Austria-Hungary, Serbia, Bulgaria, Turkey, Syria, Palestine, Africa, Egypt, and Abyssinia on foot. The way back passed through the Arabian Peninsula, Mesopotamia, Persia, India, the island of Ceylon, Malaysian Archipelago, Kingdom of Siam, Annam (now Vietnam), Southern part of China, and the island of Formosa (Taiwan). In 1912, I arrived in Japan. In Turkey and the Middle East, my knowledge of Turkish language helped me a lot. In India, aristocrats speak English and Indian is for peasants. All aristocrats in Turkey, Arabia, Afghanistan and the Middle East speak Turkish. Being abroad I noticed that the three languages compete with each other in all countries: English, German and French. French is considered to be salon language and English and German are rather commercial. I arrived in Tehran, the capital of Persia, on 7 June 1911 through Astrabad, Kermanshah. My heart started beating faster when I set foot in Persian territory. It seemed to me that native steppes were so close to me behind the mountains. I remembered my family and native Kazakh sands," Alibi wrote in his diary. 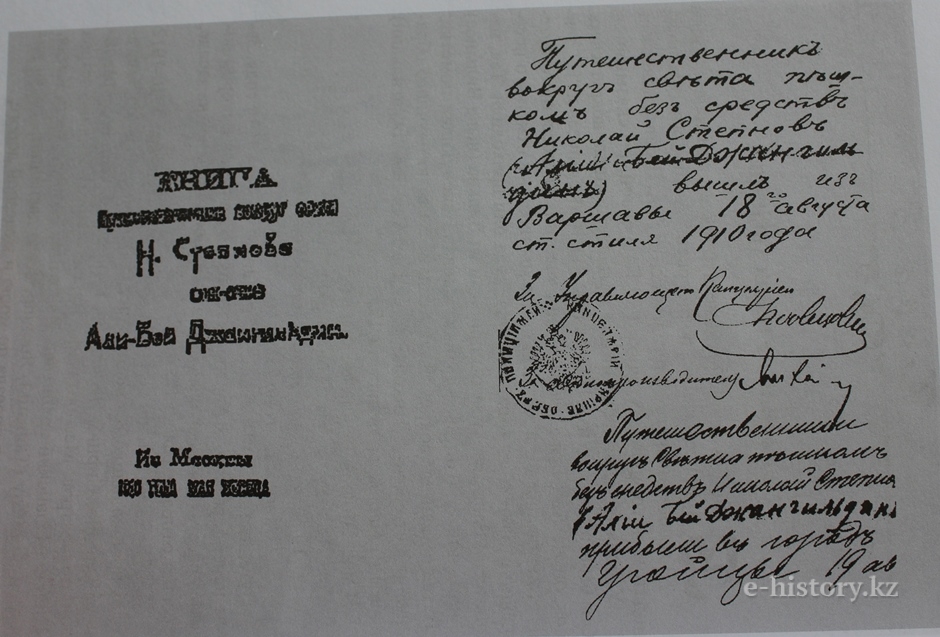 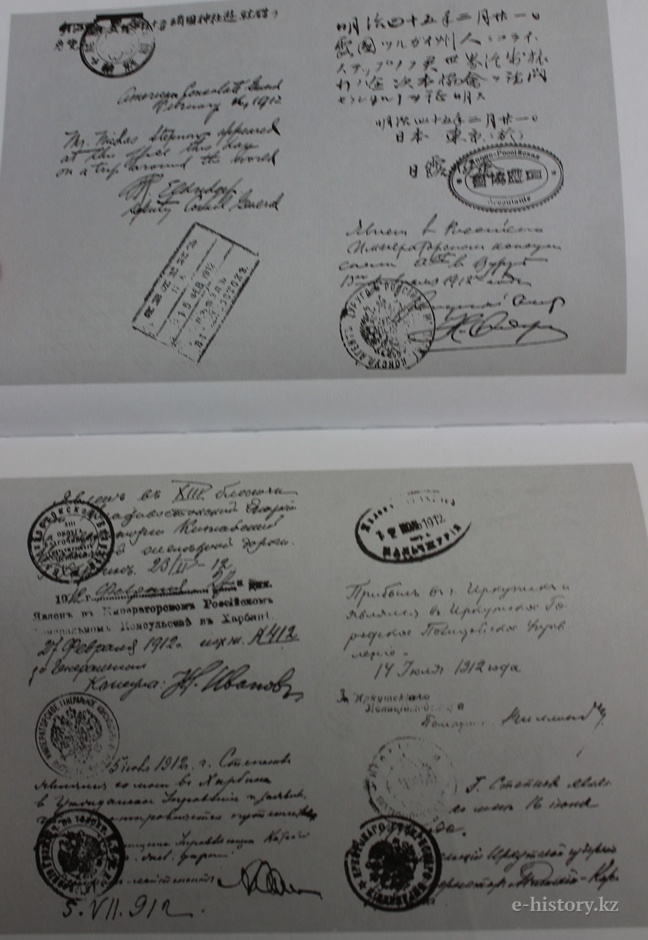 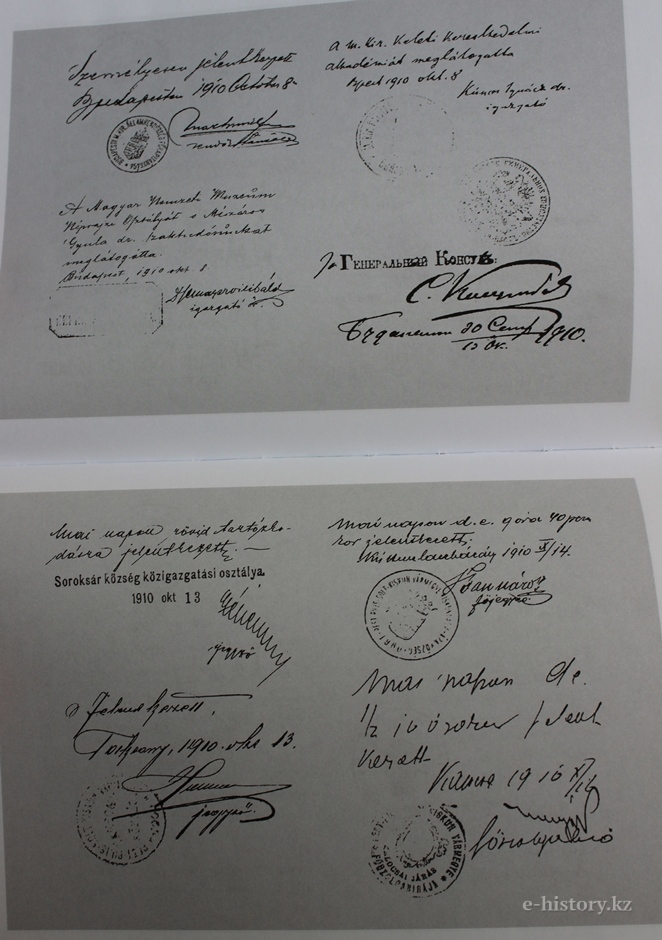 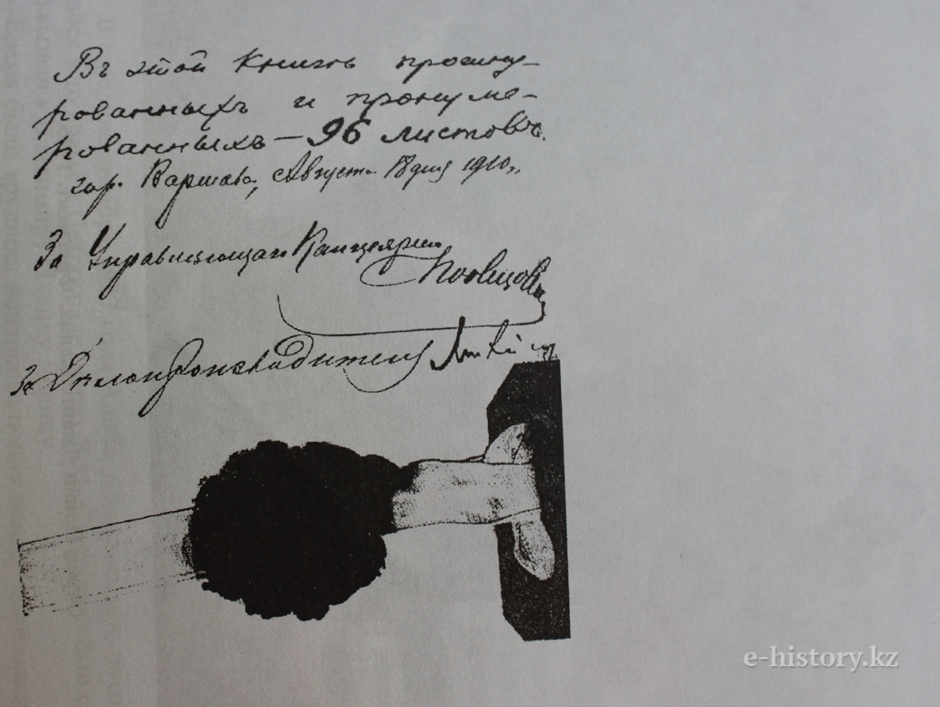 His diary, the Diary of the Traveller around the World N. Stepanov, (Alibi took this pseudonym) kept safe after the trip. This diary gave him an opportunity to register in capitals and major cities that he visited. Thus, for example, when he moved to Poland from Warsaw on 18 August (Old Style) 1910 the new note appeared in the book, "The traveller around the world Nikolai Stepanov / Ali-Bei Dzhangildin / left Warsaw on foot with the aim of scientific education." The diary included notes of Russian officials performing the functions of consul-general of all countries and cities that Alibi visited. The signatures were accompanied by the seals.

Alibi wrote, "The seal of the municipality of Bombay is particularly interesting. When I look at all these seals and read the names of countries and cities it seems like I am making the endless and fantastic journey again."

Upon the return from abroad Alibi went to his native Turgai region. He brought a new cinematograph projector and 40 film bobbins. They depicted the life of port workers of Spain, India and Chinese coolie. The pictures told about the life of that people and attitude of the British and Americans to them.

Alibi had an unusual and amazing life. He became the first Kazakh traveller to make a journey around the world, first Kazakh documentary filmmaker. He was known as a person who sang folk songs with sounds of dombra and derived strength and energy from them.

Memories of the son Genghis Dzhangildin about his father...

"In my childhood memories, there is one trip with my father to his native region at the early 1950s. All people paid special attention to me. I was a boy who lived in urban area and when one of older men gave me a piece of food as a blessing; I was confused for a moment: how could I take food from hand of stranger? However, when caught sight of my father I understood that I had to accept this as a gift and opened mouth obediently. And the last one memory from childhood. My father was invited to unveil a monument to Amangeldy Imanov. On the opening day, he felt bad but went and took me with him. We stood side by side and father firmly held my hand. I wanted only that the ceremony finished as fast as possible; I realised that it was difficult for him. When in August 1953 my father passed away a funeral ceremony took place in the Abai Opera Theatre. A great number of people arrived, most came to me, told something and stroked me over the head. I buried my mother in the same cemetery near to my father’s grave." 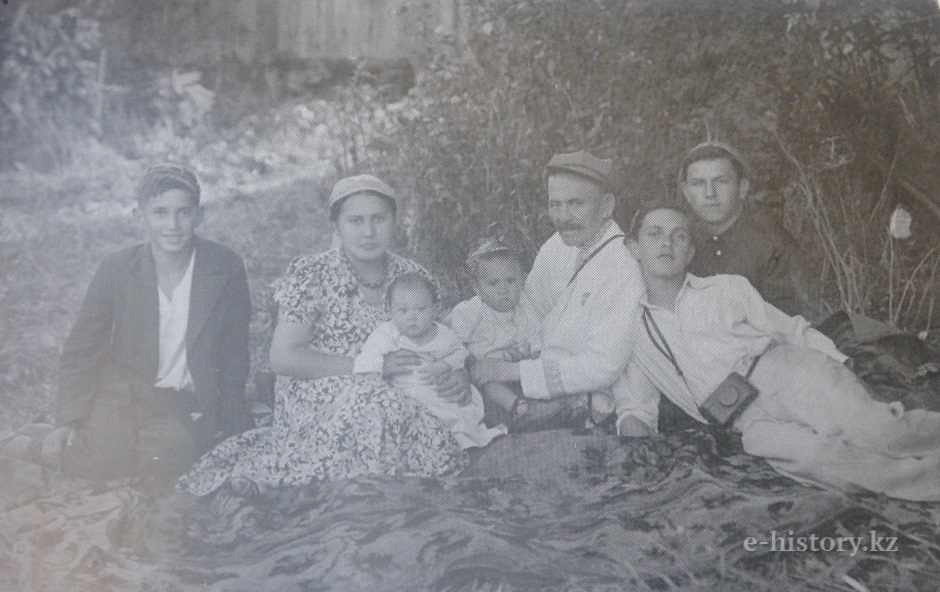 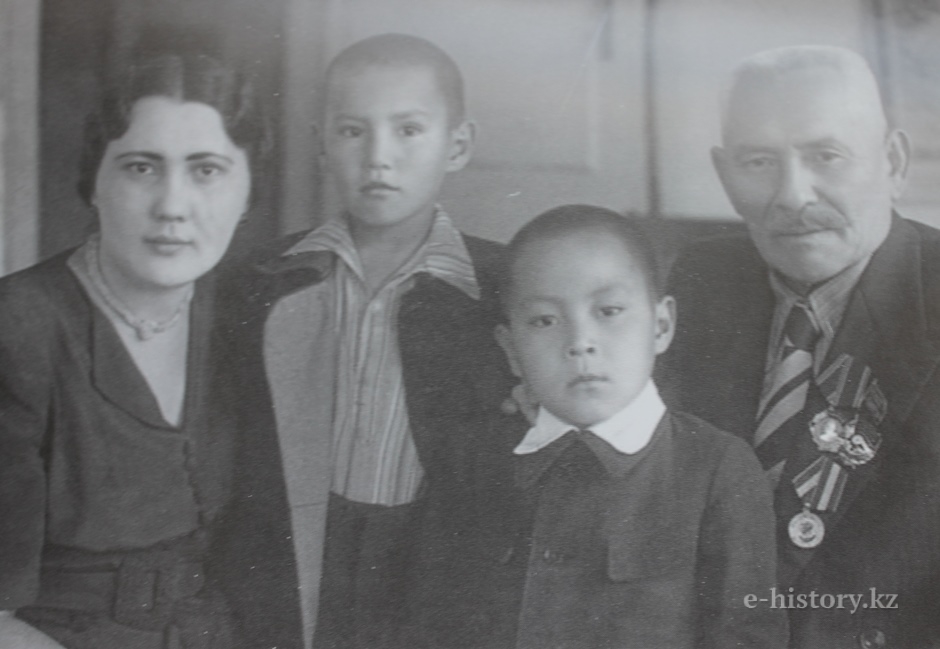 The Dzhangildins: Alibi with his wife and sons Ali and Genghis, Alma-Ata, 1946. Family archives of Genghis Dzhangildin

Use of materials for publication, commercial use, or distribution requires written or oral permission from the Board of Editors or the author. Hyperlink to Qazaqstan tarihy portal is necessary. All rights reserved by the Law RK “On author’s rights and related rights”. To request authorization email to mail@e-history.kz or call to 8 (7172) 57 60 13 (in - 1163)
Қазақша Русский English
MOST READ
Month Year
Kazakh historical drama Tomiris premiered in Istanbul
ALASH IDEA IS THE PROTECTION OF KAZAKH STATEHOOD
Stolypin about the worries and hopes of immigrants to the Kazakh steppes
A tireless explorer of the Kazakh land
SWITCHING TO THE LATIN ALPHABET – UNITE ALL KAZAKH PEOPLE
Kunaev Dinmukhamed Akhmedovich
People who eat horses will kill you
Kazakhstan's participation in the Winter Olympics has a long history
Rebooting a field of science and education
Recorded history of Kazakhstan. Part 1
Historical Dates on the Bosphorus
Recorded history of Kazakhstan. Part 2
Materials on theme
An exhibition “National Jewelry in Kazakh Culture” was opened at the National Museum of Kazakhstan
45 burial mounds of the Huns were found in Kazakhstan
The 70th anniversary since the lifting of the siege of Leningrad
The museum that has no analogues