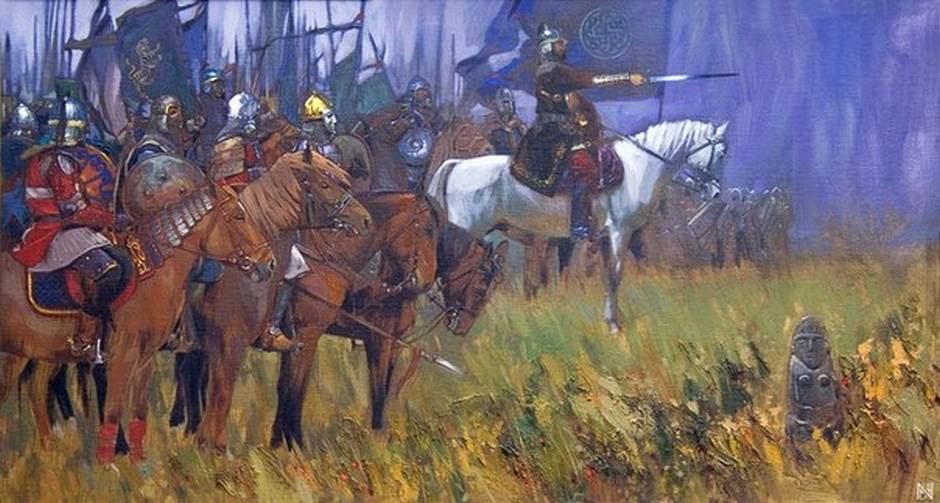 Great battles in the history of Kazakhs that changed destiny of the country.

Difficult period of Dzhungars invasion remained in memory of the Kazakhs as "Aktaban shuburyndy. Alkakol sulama" ("Years of great disaster"). Having overcome this period (1723-1727), Kazakhs recovered only after Bulanty-Bileutinsk battle.

Bulanty-Bileutinsk battle was one of the significant one and forever remained in the history of Kazakhs.

The battle was in 1727 in the wide plain between the rivers Bulanty and Bileuty. The total number of soldier on both sides was 100 thousand people. In this battle Kazakhs managed to defeat Dzhungars thanks to well-planned strategy and tactics.

About this event the famous expert in history and publicist Mukhtar Magauin wrote: "Undoubtedly, nobody will be able to protect Kazakhs except themselves. If there were no such victories as in battle at Bulanta and Anyrakay battle then three centuries ago Kazakh Horde would absolutely disappear. And look what is happened with Nogay Horde..." (M. Magauin. Kazakh tarihynyn alippesi. Almaty, 1995).

After Bulanty-Bileutinsk battle Kazakh people were encouraged and military-political unity was reached. In 1728 Kazakhs began to prepare for battle firstly moving to Lake Balkhash and further to Chu River.

The territory of battle in the north reached Balkhash, in the south — to Otyrar (the district between Chu and Almaty), in the West — Chu, in the east — Kurty. Up to this day in this place you can meet burials of Kazakhs and Kalmyks.

Anyrakay battle began a reconnaissance of both parties. Both Kazakhs and Dzhungars explore a relief of the mountainous terrain to know how to favorable use the territory for the military purposes like using a small number of soldiers cause considerable loss to the opponent. Dzhungars had more weapons than Kazakhs. Along with guns Dzhungars used cannons for distance defeat. However, Kazakhs already knew and mastered ways of doing battle with cannons. The battle lasted more than forty days and finished with a large victory of Kazakhs.

On the territory of East Kazakhstan throughout the whole history there were two large battles Shagan and Shorgin battles.

Shagan battle of Kazakhs and Dzhungar troops began near to Lake Balkhash and moved to the territory of Mountains Genghis. At first Dzhungars troops desperately resisted, then pretended that began to retreat and escape. And later returned and successfully realized the trick having destroyed a great number of Kazakh rebels. It lasted a week until Kabanbay batyr suggested very good tactic.

In this battle Dzhungars were defeated and their main commander Dorzhi committed suicide. At that time Abylay khan in honor of victorious completion of Shagansky fight gave the name "Daraboz" to Kabanbay batyr. `

Tens thousands of Kazakhs and Kalmyks participated in Shorgin battle (1750). This battle was one of glorious pages of history of the Kazakh people. In general and East Kazakhstan in particular it is difficult to overestimate value of this victory for further destiny of Kazakhstan: new threat of invasion the Dzhunghar on the territory of Kazakhstan was prevented. As a result of this battle the territory of Tarbagatay which was earlier in possession the Dzhunghar moved to Kazakhs.