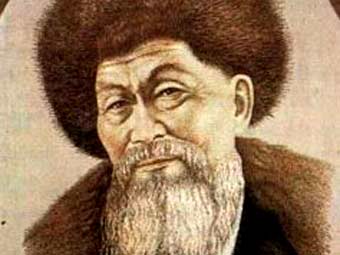 The Memorial Literature Museum of the prominent Kazakh akyn Zhambyl Zhabaev (1846-1945) is located in the village of Zhambyl district, Almaty region

Summer pastures and planting areas owned by the Dulat tribe, to which Zhambyl belonged, were situated in the same place of the lower Chu River.

Zhambyl Zhabaev was born at the foot of the mountain called Zhambyl, hence the name of the akyn (singer-improviser). His father was nomad and cattle breeder. Zhambyl grew in a yurt and together with his family travelled from one encampment to another. His mother Uldan and uncle Kanadin, who were talented singers and musicians, taught the boy playing the dombra (Kazakh national musical instrument). Zhambyl started playing dombra when he was 12 years old. "When the instrument fell into my hands, — Zhambyl recalled, — it seemed to me that it was my heart sounding rather than the dombra". It defined the fortune of Kazakh singer. On July 30, 1945 the Union of Writers of Kazakhstan sent a letter to the Council of People’s Commissars of Kazakhstan with the suggestion to establish a museum of Zhambyl. Monument in the territory of Zhambyl Zhabaev Memorial Literature Museum

Zhambyl’s house and estate were reorganized into the museum in accordance with the same principle of the Museum of the great Russian poet A. S. Puskin, Museum of V. V. Mayakovsky in Moscow, house of Chekhov in Taganrog, and museum of L. Tolstoy in Yasnaya Polyana.

According to the Decision of the Council of Ministers of the Kazakh SSR of 13 February 1946 the Zhambyl Zhabaev Memorial Literature Museum was established in the village of Zhambyl (Zhambyl district, Almaty region), 70 km to the west of the city of Almaty. The museum complex includes wooden one-story frame house with 12 rooms where Zhambyl spent his last years of life (1938-1945), the house where he lived until 1938, mausoleum and park (architects I. Belotserkovskiy, V. Biryukov, and A. Deev). 
The mausoleum was erected in 1946 and reconstructed in 1958 (the author of the project is architects I. Belotserkovskiy, based on sketches by artist A. Kasteev). It is an octagonal building made of burnt brick, which measures ten metres high, lined with white marble tiles. It has sphere-conical dome and four cast-iron door decorated with tracery ornament.

There is a tombstone made of black marble with very short inscription: "Zhambyl Zhabayev. 1846-1945″. The facades are decorated with Kazakh ornaments. Rectangular granite plaques with quotes from Zhambyl’s works and opinions of famous writers and poets about him are set along the road to the mausoleum. The museum exposition consists of 12 sections, including Zhambyl’s personal belongings, government awards, souvenirs, Zhambyl’s works published both in the Soviet Union and abroad, commemorative gifts from soldiers of the Soviet Army, photographs and documents demonstrating his creative path and public activity. There is Zhambyl’s car in the garage. Interior of the sitting-room in the Museum of Zhambyl Zhabaev Interior of the dining-room in the Museum of Zhambyl Zhabaev

Kazakhstan people still remember their favourite akyn, the steppe Homer who reproduced the dignity, decency, diligence of the nation.

The photos were taken from http://zaleskiy.com/tag/muzej-zhamby-la-zhabaeva.

Materials on theme
The old-timer building. Russian commerce and industry bank
"Golden Thread of History" in national products of Aizhan Abdubait
Infographics: The Flag of Victory
The Mausoleum of Khoja Ahmed Yasawi