History and legends of ancient Zhankent 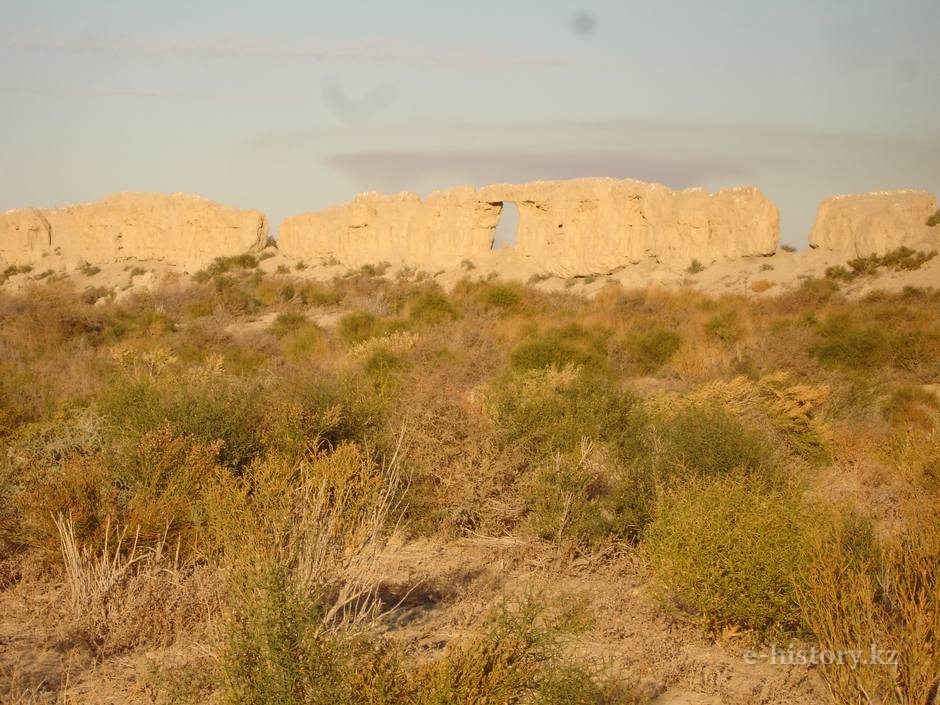 Irina Arzhantseva, PhD, Head of Centre of Eurasian Archaeology, Chief Scientist at the Institute of Ethnology and Anthropology, Russian Academy of Sciences, Senior Research Fellow at the Institute for Oriental and Classical Studies under the Russian State University for the Humanities, has told our web-site about excavation at the site of ancient Zhankent. 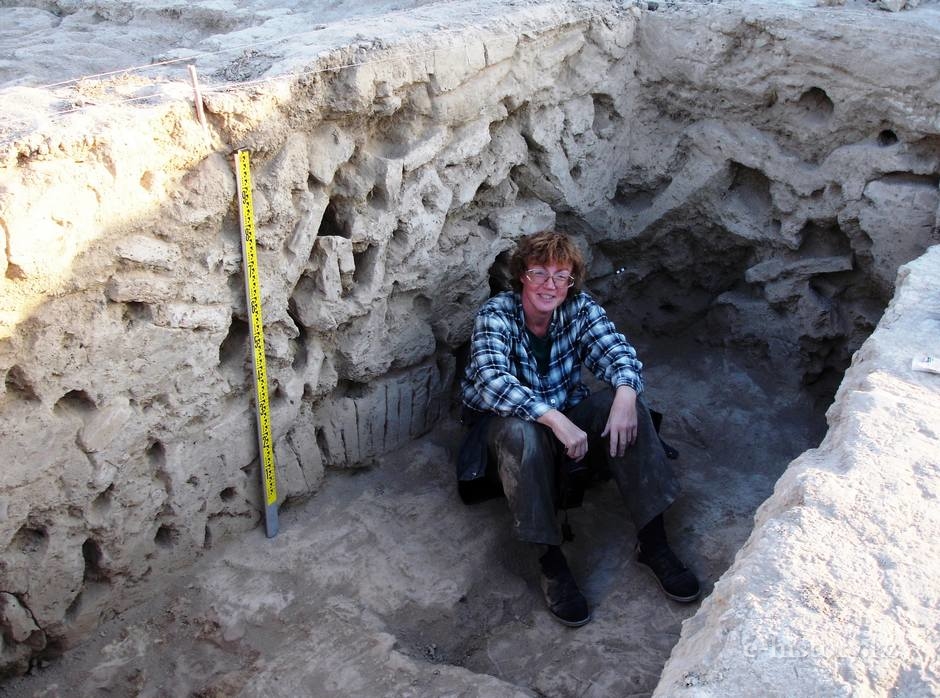 — Zhankent settlement is still not widely known compared with such ancient cities as Otrar and Sayran. Since Khorezm Archaeological and Ethnographic Expedition until 2005 there had been no any excavations in this site. Why then you got interested in it?

— Such remarkable monuments as Otrar and Sauran have a long history of archaeological excavation. Prominent archaeologists K. Akishev, L. Yerzakovich, Ye. Smagulov, and many others have worked and still work there. Hence, they are very popular and known. And they deserve their status.

Until recently, Zhankent was known only to specialists who studied early mediaeval and medieval history of Kazakhstan, written sources related to that period, and history of Oguzes. However, this monument with a long history of research has been known for a long time. In mediaeval written sources Zhankent was mentioned by several different titles, which can be translated as "the new city" and marked as a residence of "tsar of Guzes".

Wall of the citadel and towers 1 and 2

New stage of research of the monument began with the Khorezm Archaeological and Ethnographic Expedition. In 1946 flight group of this expedition conducted the first aerial survey of the monument, exploratory survey and description. It also collected archaeological material from this place. Now it is deposited in collections of the Institute of Ethnology and Anthropology, Russian Academy of Sciences. But the Khorezm Expedition didn’t carry out systematic excavations there. 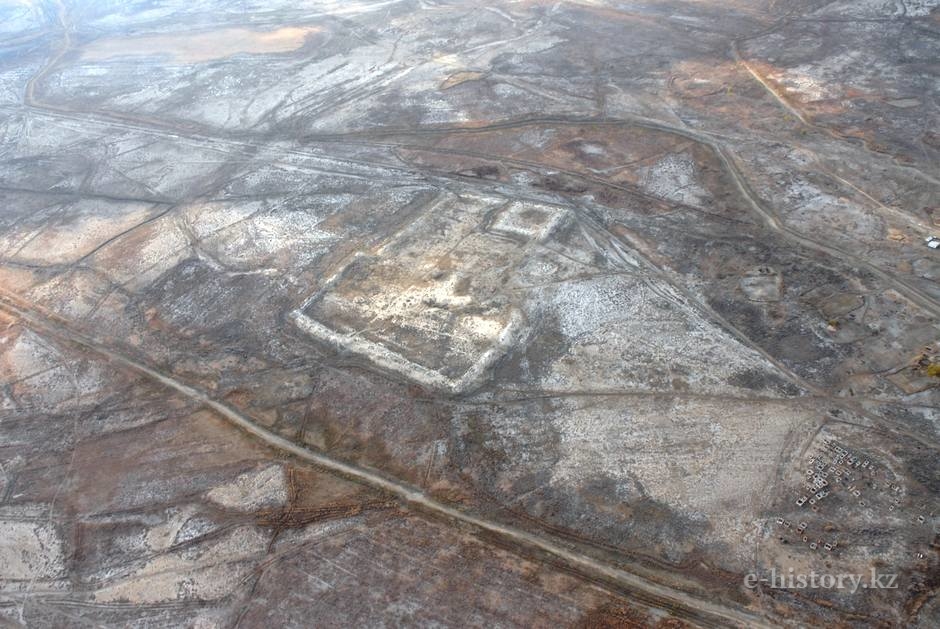 Zhankent. View from a hang-glider

I got interested in this monument because for me it was like a "return to the roots", if I may say so. I am an archaeologist-orientalist. I started my career working at the settlement of Afrosiab (ancient Samarkand). For the first time I went there when I was a student. In total I spent there six field seasons. Then I had an opportunity to work for the legendary Khorezm Expedition in Kazakhstan.

After the collapse of the Soviet Union it became more difficult to go to Central Asia and my interests shifted to Northern Caucasus where I worked at early mediaeval Alanian settlements for 20 years.

In 2005 within the frameworks of the cultural programme "The Year of Russia in Kazakhstan" I was invited to Kyzyl-Orda with my colleagues from the Institute of Ethnology and Anthropology, Russian Academy of Sciences. It was then when together with lecturers and students of the Korkyt Ata Kyzyl-Orda State University during one week we travelled around 3000 km, literally "on the trail of the Khorezm Expedition" by university bus. We visited Zhetyasar mountain area and swamp settlements in which I was always interested. Thus, 2005 became the year of returning to Central Asia and Kazakhstan for me. 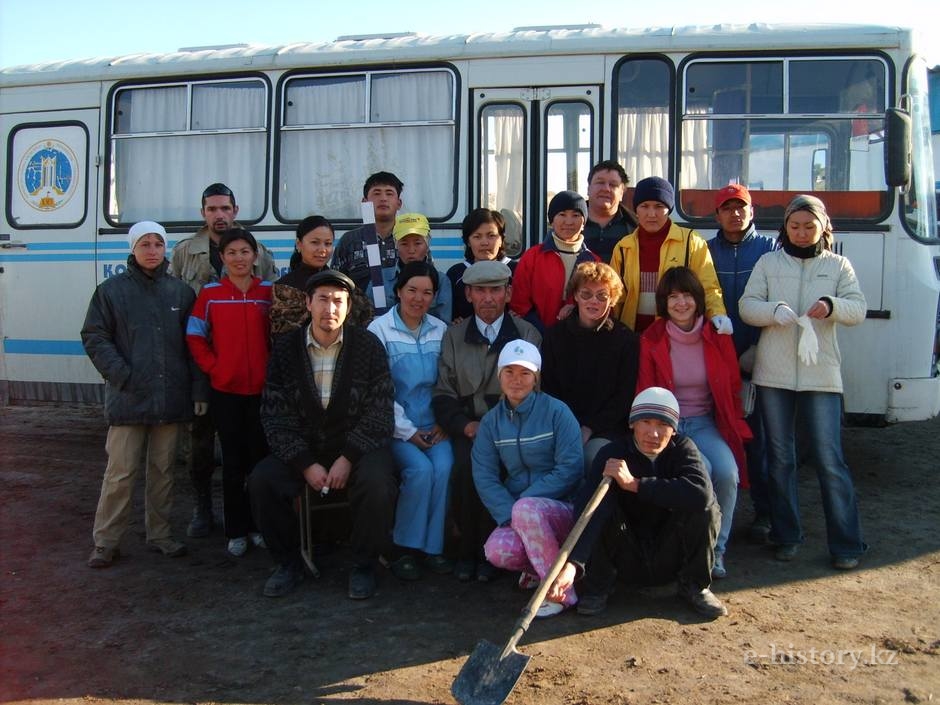 For any archaeologist who focuses on ancient settlements research of such complicated and multilayer monument is of a special interest. To discover secrets of a settlement is to complete a puzzle. But one man could hardly solve this task. A whole team is required. In addition to archaeologists it should include other experts. From the very beginning geophysics, soil specialists, geomorphologist, ceramic specialists and osteologists have been working for our expedition. 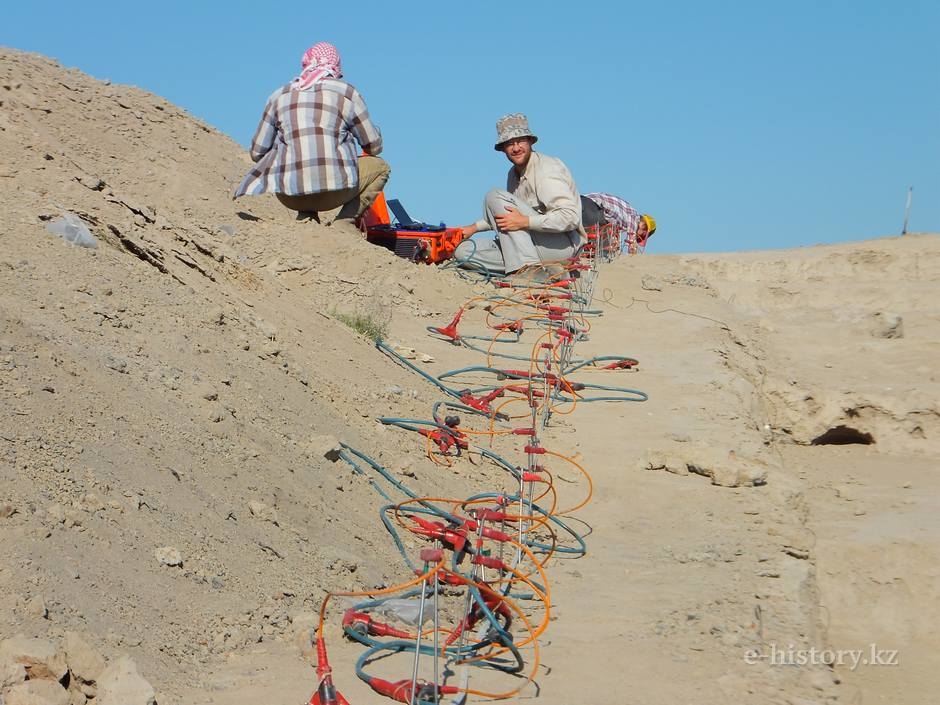 During its work the expedition collected significant material but not all collected archaeological objects have being processed (for example, only ceramics accounts several thousand fragments and vessels). The work is continuing.

— Is it true that his ancient monument elicits the genuine interest of Western researchers?

— Certainly, like the whole remarkable in many respects region of the Lower Syr Darya River. In 2009 a professor from the University of Tuebingen, famous archaeologist Heinrich Harke (Germany) joined our expedition. Since that time every year he is involved in the work of the expedition and different projects related to Zhankent. 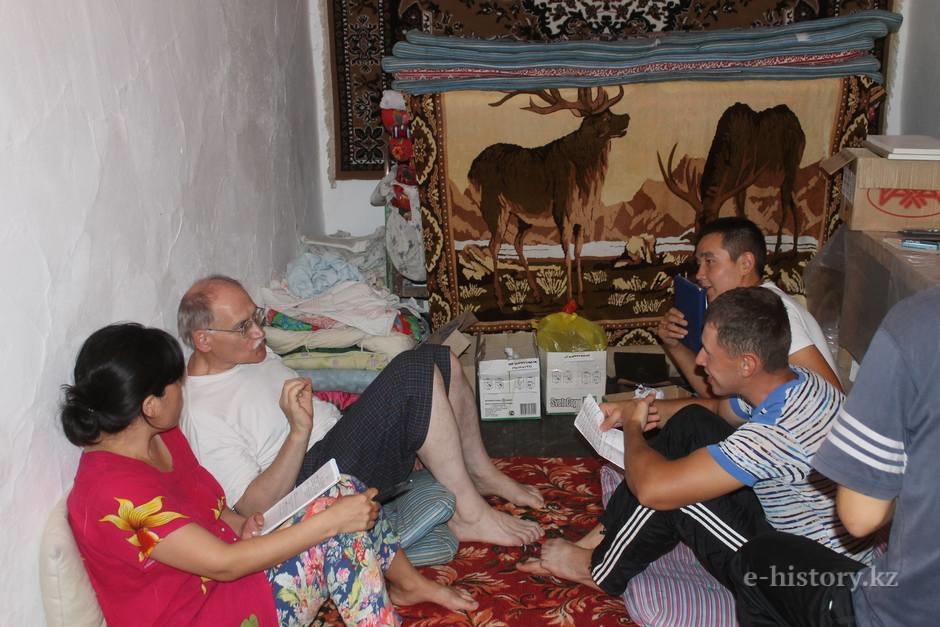 Heinrich-agay (agay is used to express respect for a person), as local residents usually call him, became favourite person of the entire Urkendeu (the village where we organised our archaeological camp) and students-archaeologists from the Kyzyl-Orda University.

In 2011 our project was supported by the famous American Wenner-Gren Foundation. We managed to conduct field archaeological season and significant geophysical work which was carried out by our standby partners, students and graduate students of the Geological Faculty of the Moscow State University under the leadership of Professor I. Modin.

In September 2011 we organised a field seminar and conference on the problems of urbanization processes in Eurasia in the 10th century. The conference was attended by our colleagues from Oxford and Tuebingen — Grenville Astill and Jorn Staecker. Both of them are very famous experts on the issue.

— If it the settlement is situated in desert why do archaeologists call it "swamp"?

— Most researchers equate the ruins of this settlement with historical city of Zhankent which was mentioned by several medieval written sources. Though it is always very difficult to compare archaeological monument with data from written sources, in this case such comparison is rightful. In the middle of the 18th century in the first descriptions local residents call these ruins Zhankent (Yankent, Yangikent). The modern name of the monument — Zhankent — originates from Turkic word "Yangikent". "Zhan" is a changed form of adjective "zhana" and, like "yangi" means "new". "Kent" means "settlement", "fortress".

Today this place is a desert. But during the expedition of S. Tolstov in 1946 the land was very wet and covered with reed. Our specialists determined the overwetting of soils.

The term "swamp settlements" was introduced by S. Tolstov in 1946 for the group of monuments situated near the former riverbed of Syr Darya, more precisely on the triangular peninsula confined by Syr Darya in the North, Aral Sea in the West and swamps and reed in the East, which were studied by the group of the Khorezm Archaeological and Ethnographic Expedition. 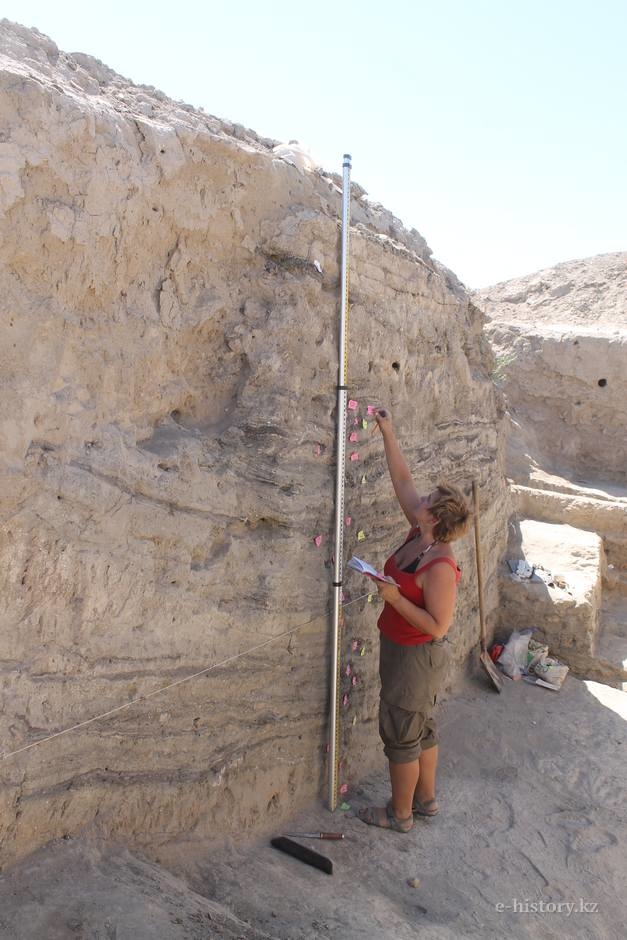 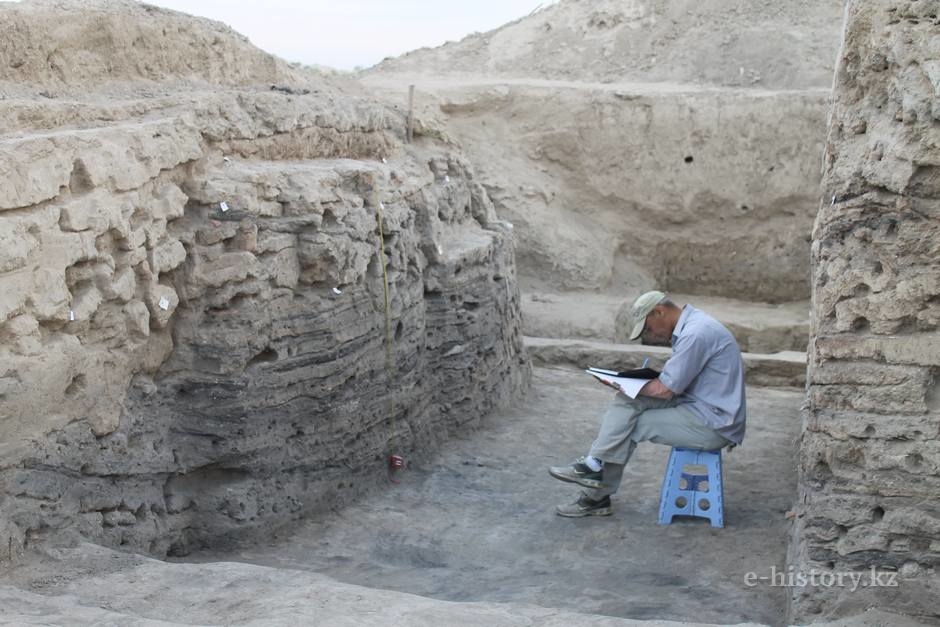 At the moment, the land is very dry and the settlement is surrounded by irrigation channels. Significant desertification of the area is the result of unsystematic cattle grazing and improper redistribution of water.

— This is exactly what we study.

There are several hypotheses about the emergence of "swamp settlements". Initially, based on visual observations, general planimentry of settlements and analysis of collected material S. Tolstov suggested that these settlements existed consistently from the very beginning of the 1st century A. D. to the 10th-11th centuries. 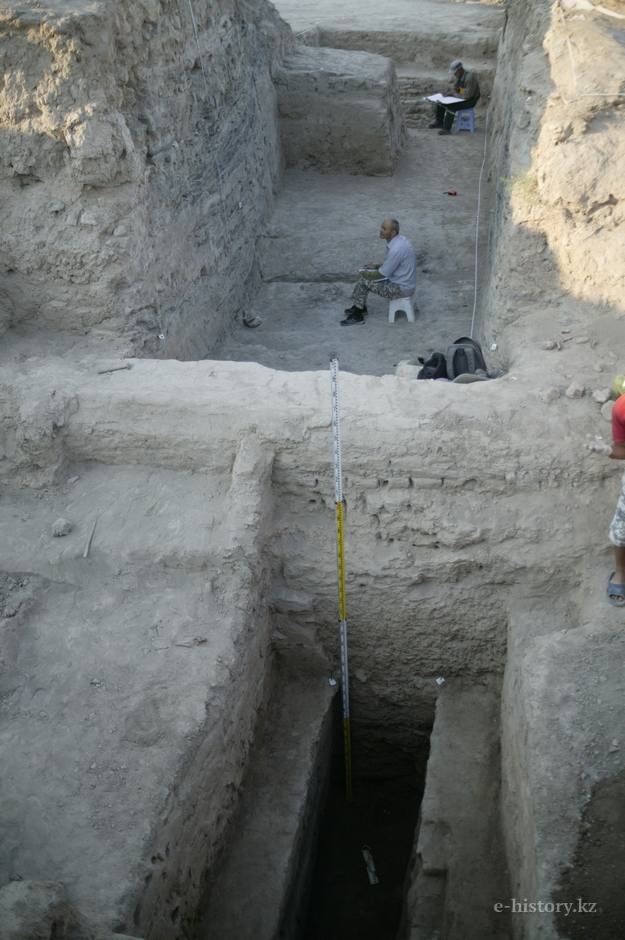 Zhankent. Wall of the citadel

Today history of settlement in the monument is as follows: when people from Zhetyasar arrived there in the 7th century a site already existed (we still do not know who lived there). Maybe at that time it had already been deserted. New comers settled there. Some people from Afrigid Khoresm joined them for trading reasons (this was confirmed by their wonderful ceramics made of white clay). Oguzes came there only at the end of the 9th and beginning of the 10th centuries. According to written sources, they made the city their capital, or the headquarters of their ruler (yabgu). The unique architecture, which we can see today, emerged at that period. 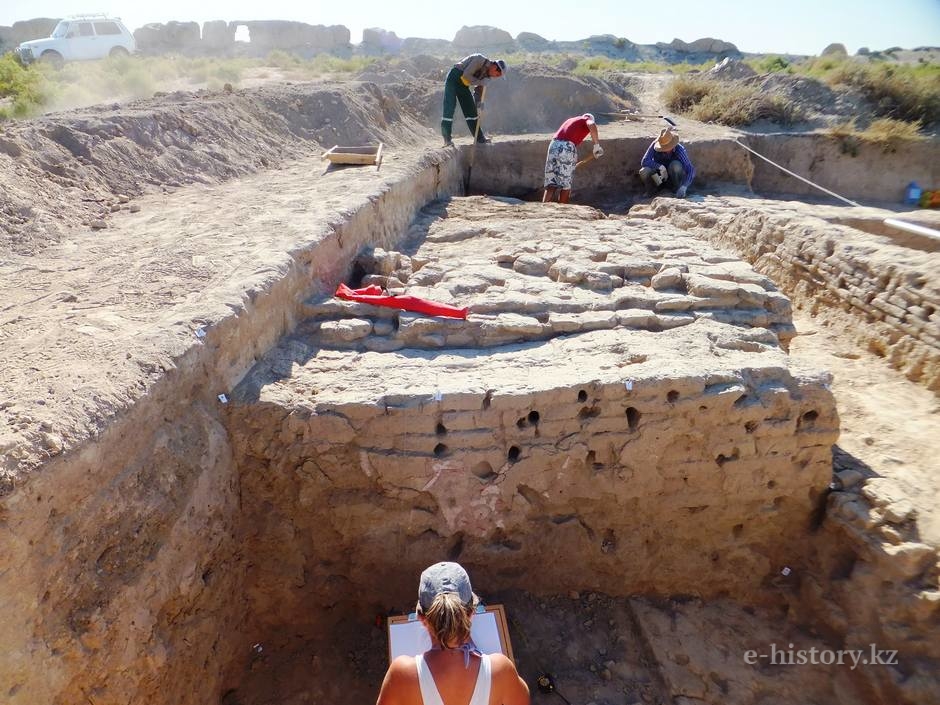 — What are the opinions concerning the reasons of its decline? As I know, there is a legend which says that the city was deserted at the time of Khan Sanzhar. The jealous Khan was punished because he suspected his faithful wife Begim of treason. A wineskin appeared above the city and snakes rained down.

— Yes, the legend is famous and compelling. But it is just a story.

Although, frankly speaking, in the first years of our excavation in the monument we see a lot of snakes (mostly dice snakes). Of course, at first we were scared. Just imagine, you come to the site in the morning and see 2-3 coiled snakes. Working day started with removing reptiles from our working place.

We came up with a lot of things. Mostly we used spades: we drove snakes by one spade to another and removed from the site holding them as we do with salad servers. We didn’t expect commendations from them. As soon as we threw them we had to be careful as they literally started attacking us.

At first our students were afraid of them. And do you know how we coped with it? We start giving names to snakes. Thus, the biggest one, which we found in the bushes, received a respectful name Zinaida Ivanovna. The other snakes were called "Zinka" (short form of "Zinaida"). After that it became easier to deal with them. In subsequent years, they disappeared. I do not know whether we disturbed them or the curse of Khan Sanzhar was undermined. 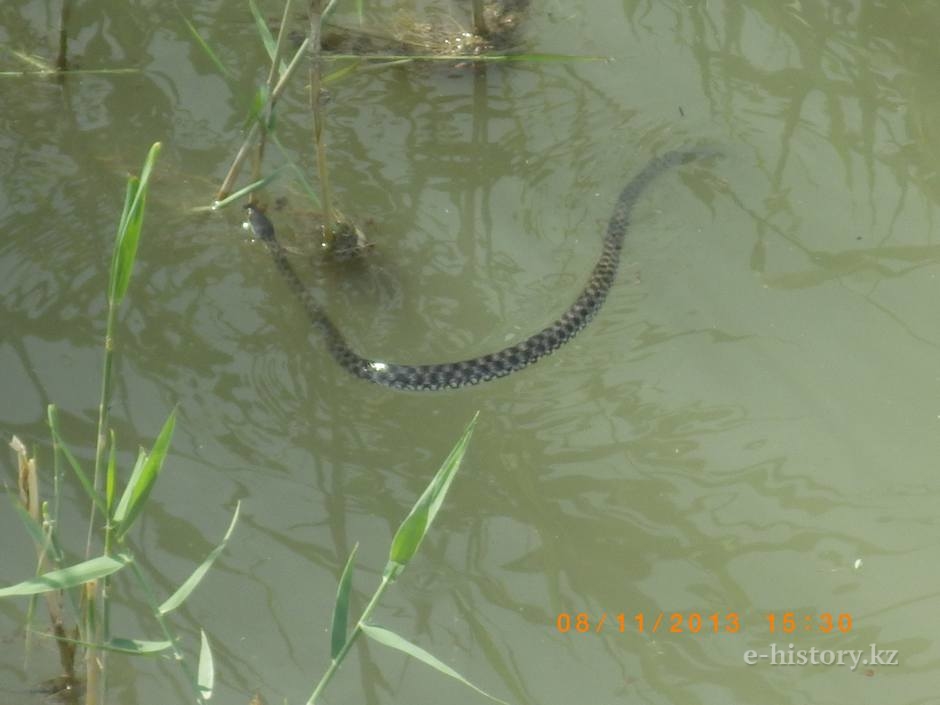 Zinaida Ivanovna swims near the place of excavation

More seriously, the reason of decline of swamp settlements is unknown. We discovered a smoke layer in the site of Zhankent. I can’t say that it was large-scale but traces of fire were noticeable enough. It means that an external disaster happened. So, we will try to learn what happened.

— Do you plan to continue excavation in Zhankent?
— Yes, of course, we have such plans. But, as people say, Inshallah.