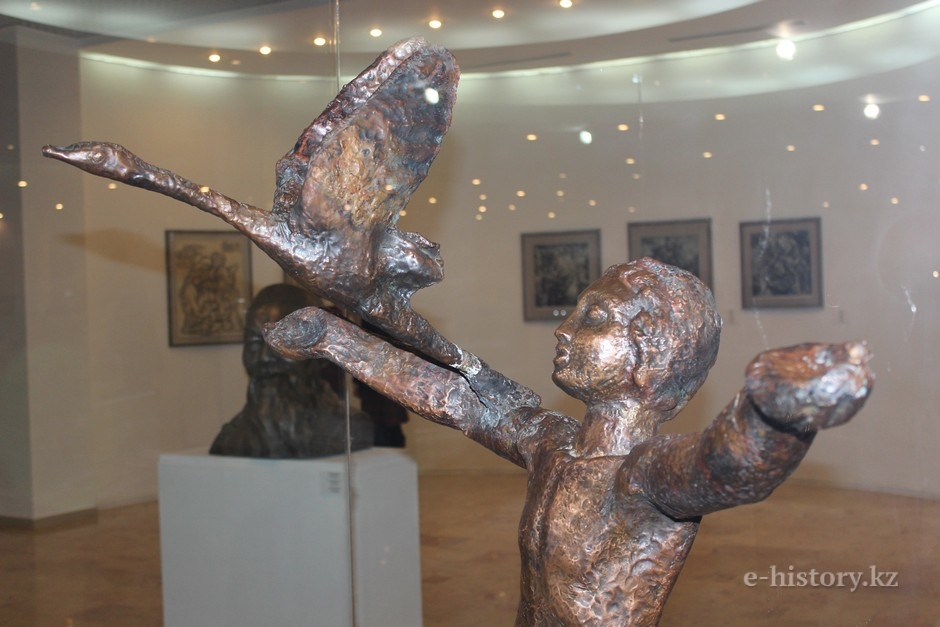 In National art gallery “Astana” the ceremonial opening of the hall of graphics and sculpture, where were presented the works of authors, who made enormous contribution to national art, took place. 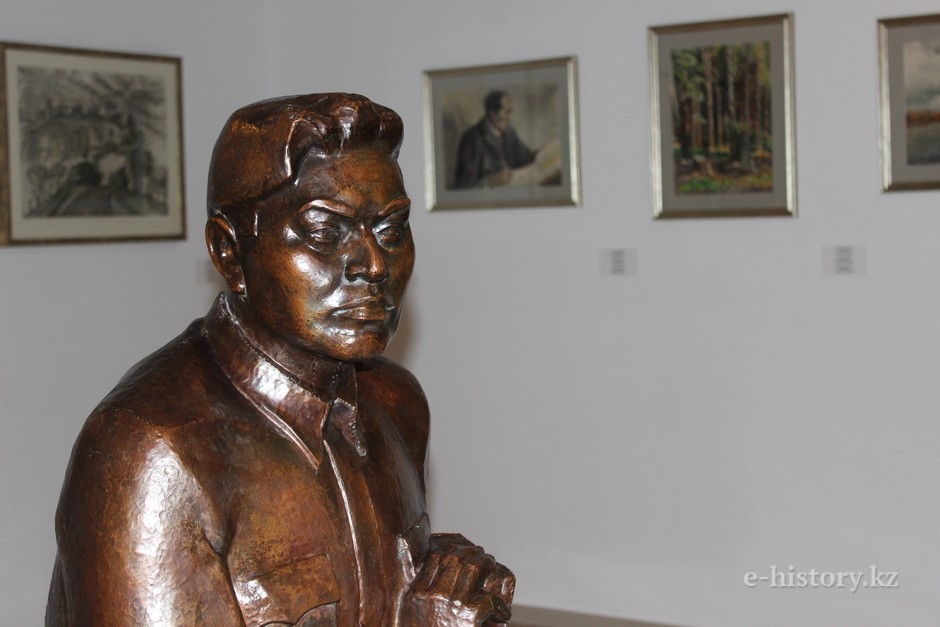 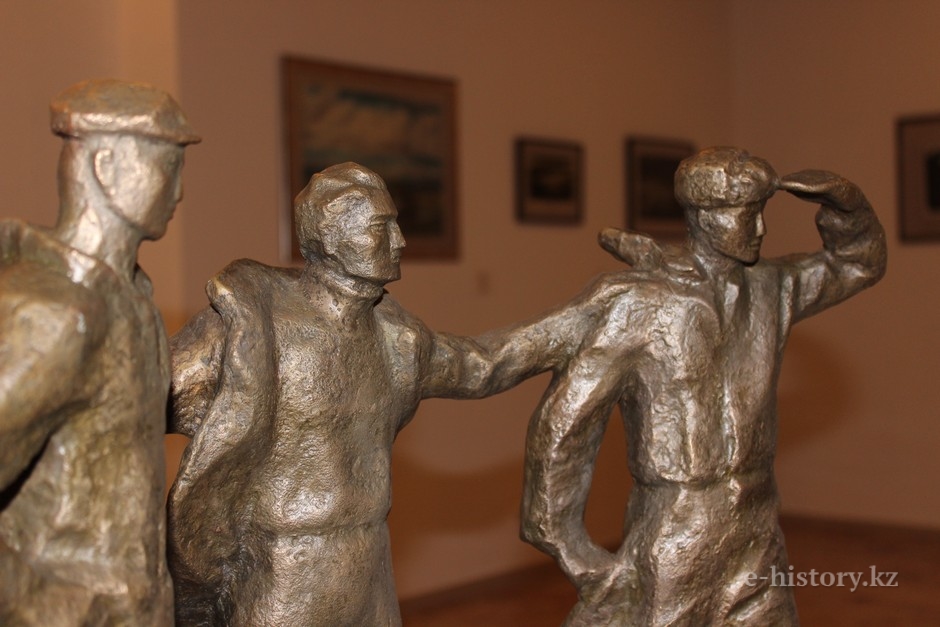 Works of these artists and sculptures became classic and replenished gold fund of the fine arts of Kazakhstan. Works of the listed classics are shown in the new opened hall of graphics and sculpture of Astana art gallery. All of them are executed in different techniques and on different subjects. Many works are devoted to history, culture and literature of Kazakhstan. 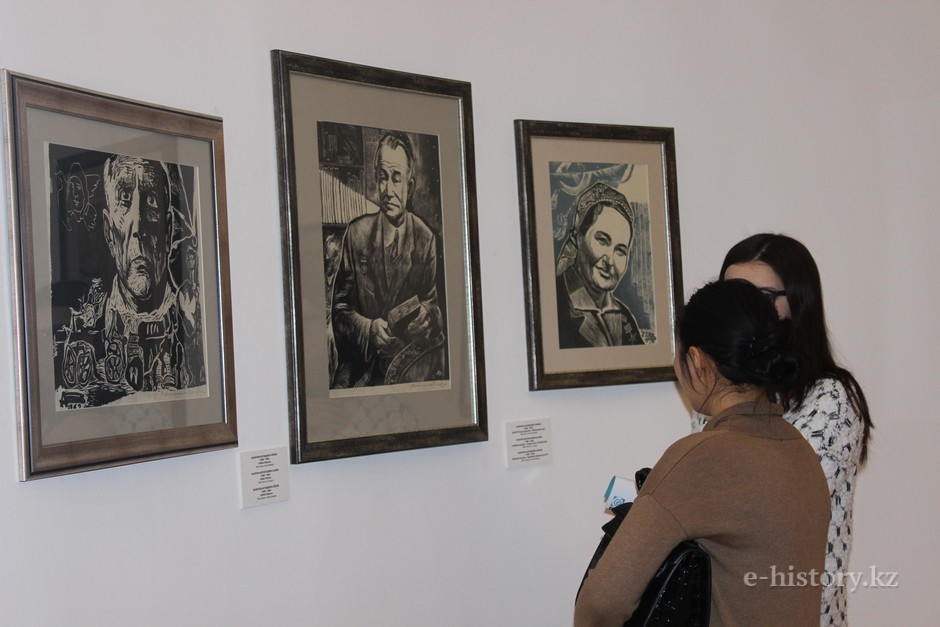 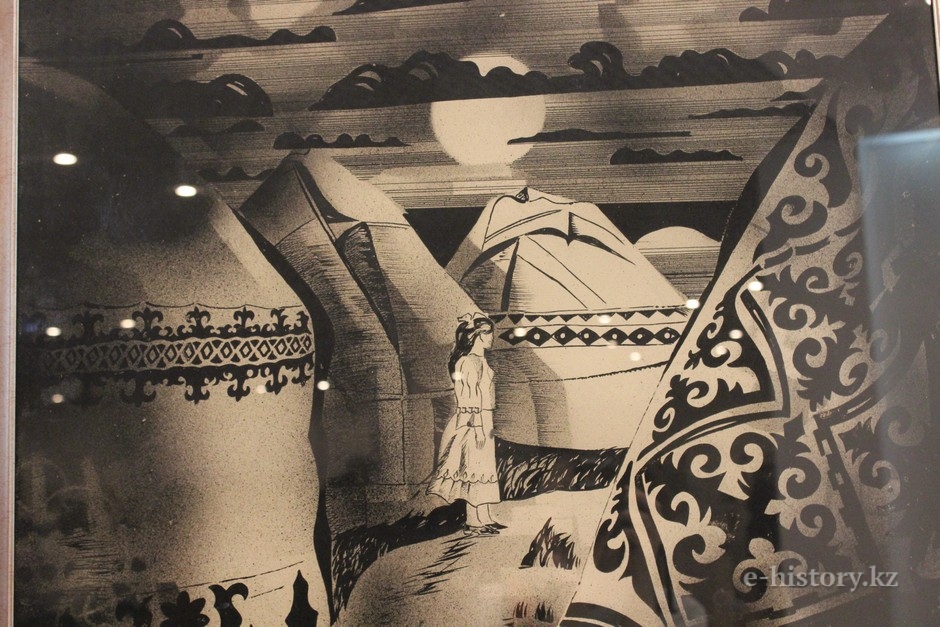 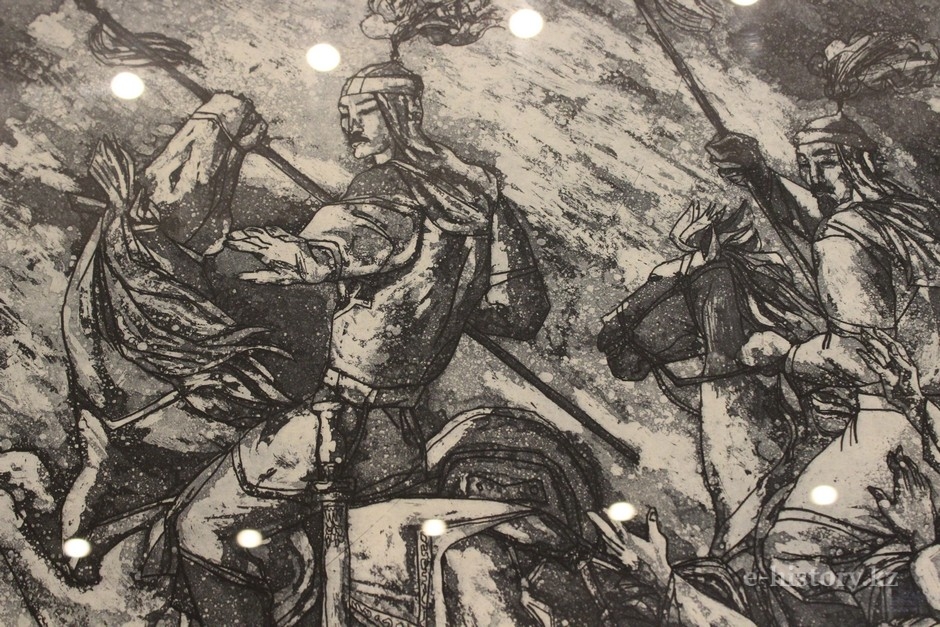 Among visitors was Bakhytbek Muhametzhanov, one of the first students of professional sculpture of Kazakhstan and founder of Kazakhstan school of sculptures Hakimzhan Nauryzbayev. "Hakimzhan influenced on creation of department of sculpture in art school. I enrolled to Almaty State Theatrical and Art Institute (now it is the Kazakhs National Academy of Arts named after Zhurgenov) on department of sculpture of art faculty where Nauryzbayev taught. He was my research supervisor and was very good teacher" — said sculptor and Professor Bakhytbek Mukhametzhanov. 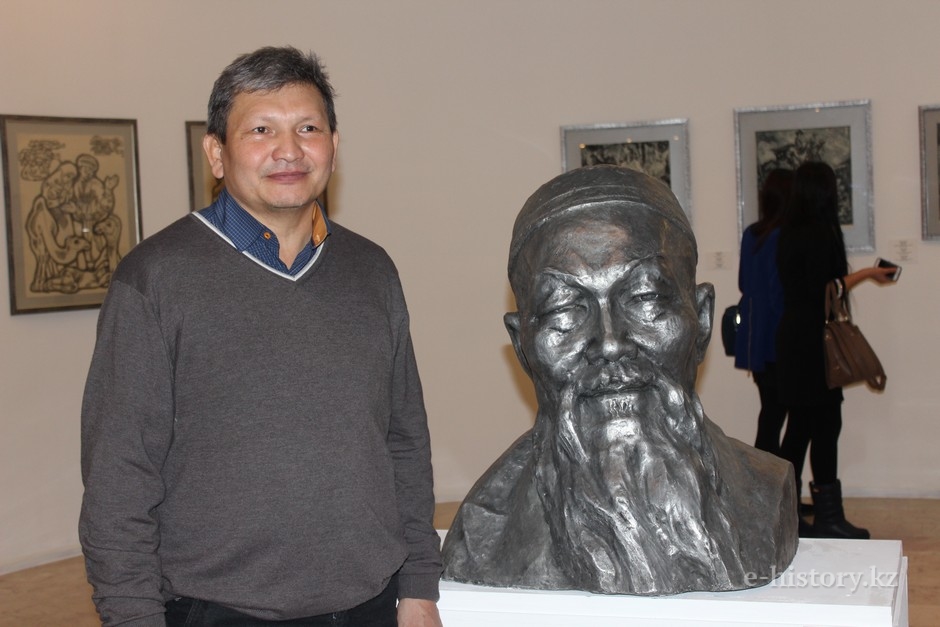 Hakimzhan Nauryzbayev is an author of more than 300 works, among which well-known monuments to Abay Kunanbayev and Chokan Valikhanov in Almaty. "Nauryzbayev had many works, generally they are big monuments. For example, a monument of Abay in Almaty on intersection of streets of Abay and Dostyk, in my opinion it is the best monument in Kazakhstan set to the poet. Hakimzhan could create an image of Abay, not just simply a portrait. He also has Zhambyl, Auezov and Seyfullin’s sculptures. He generally worked in a portrait genre and these works are very strong" — considers Bakhytbek Mukhametzhanov.

It is the sculpture of famous Anatoly Bilyk — great master and legendary person. Its sculptures are the business card of Karaganda and inseparable from history of construction and development of this city. Anatoly Bilyk together with his spouse arrived to Karaganda from Ukraine when Karaganda was small. Thus, he remained there and his entire life is connected with the miner’s city and Kazakhstan. The monument "Miner’s glory", a monument to metallurgists is only a small part of master’s masterpieces. 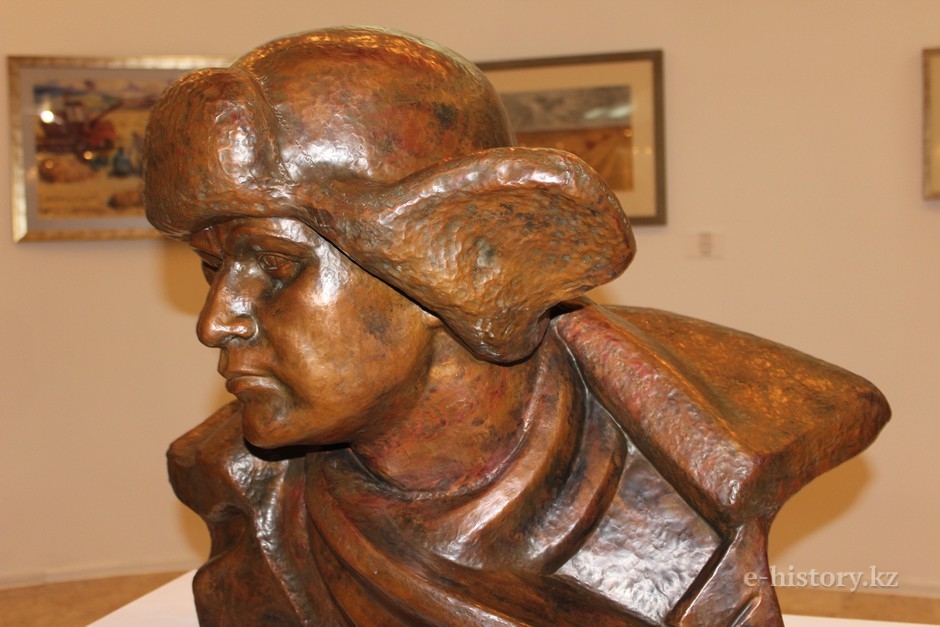 A large number of graphic sheets, linocuts and lithographs of the most gifted artists of Kazakhstan is given at the exhibition. Unfortunately, today publishing houses do not need artists-graphist and literature graphics as a genre gradually disappears. Today we could not find such professionals as Sidorkin, Isabayev, Kusamedinov and Abayev.

Yevgeny Sidorkin’s graphic works are very interesting. He came to Kazakhstan, after graduation of the Leningrad Art Institute named after Repin together with the spouse, well-known artist Gulfayrus Ismailova. Having no ideas and experience with Kazakh culture, history and literature, he will create masterpieces as if he was native Kazakh person. Sidorkin found his genre and indeed reached in it perfection. He created images, transmitted spirit and his own vision of the read literary works. 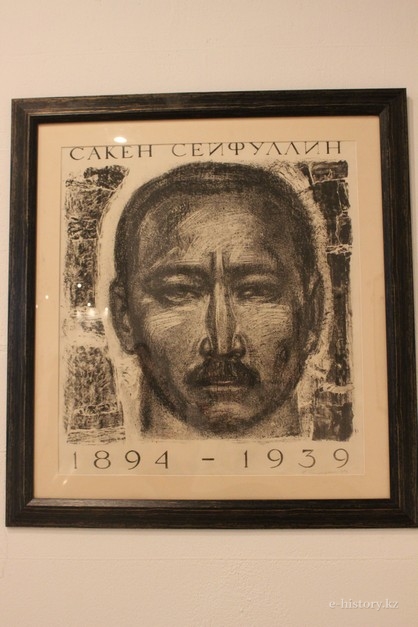 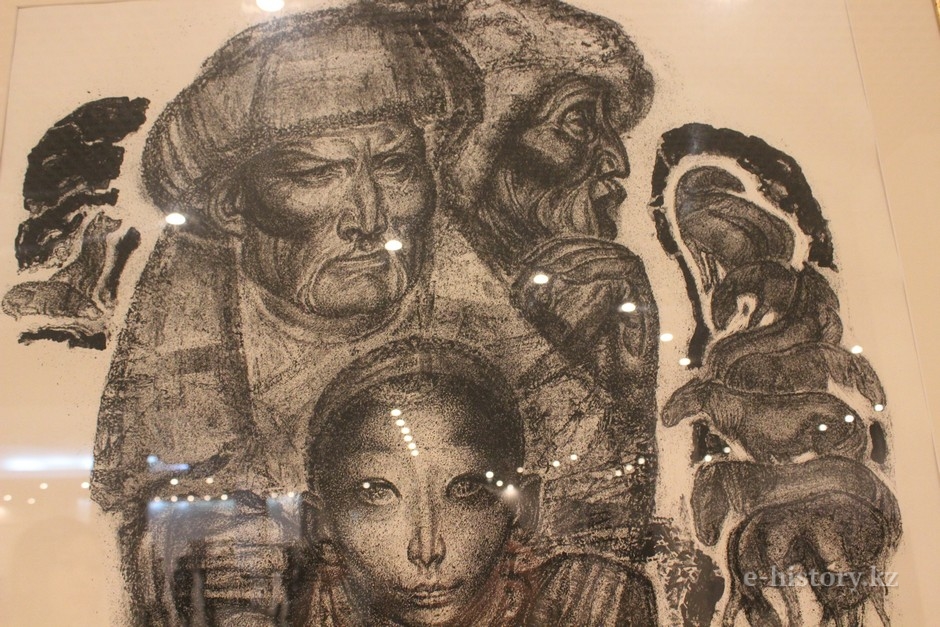 Capacity, expressiveness and figurativeness of vision — all this is handwriting of lithographs of Evgeny Sidorkin. He is the author of illustrations to M. Auezov’s epic novel "Abay", "The Kazakh epos", "National games", to the collection of fairy tales "Cheerful Deceivers" and series "While reading Saken Seyfullin". In more than twenty years of operation as the artist spoke, he illustrated practically all Kazakh legends. According to the artist in twenty years he illustrated practically all Kazakh legends. They are"Kozy-Korpesh and Bayan-Sulu", "Kyz-Zhibek", "Kambar-batyr", "Koblandy", "Ayman-Sholpan" and "Alpamys-batyr". 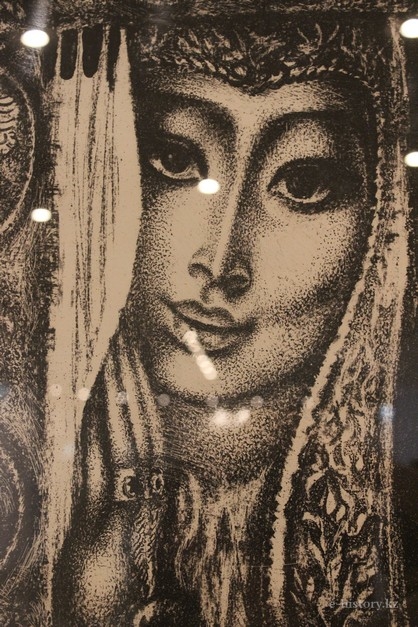 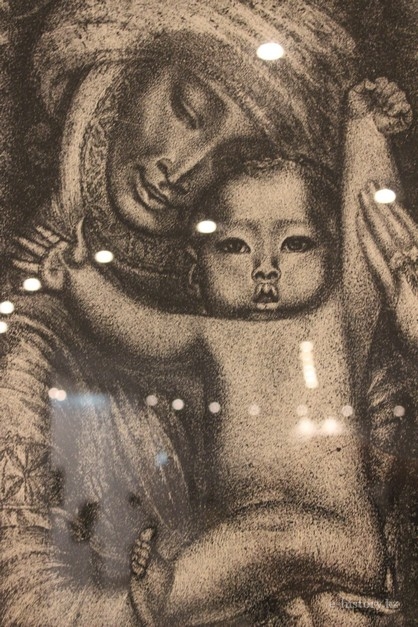 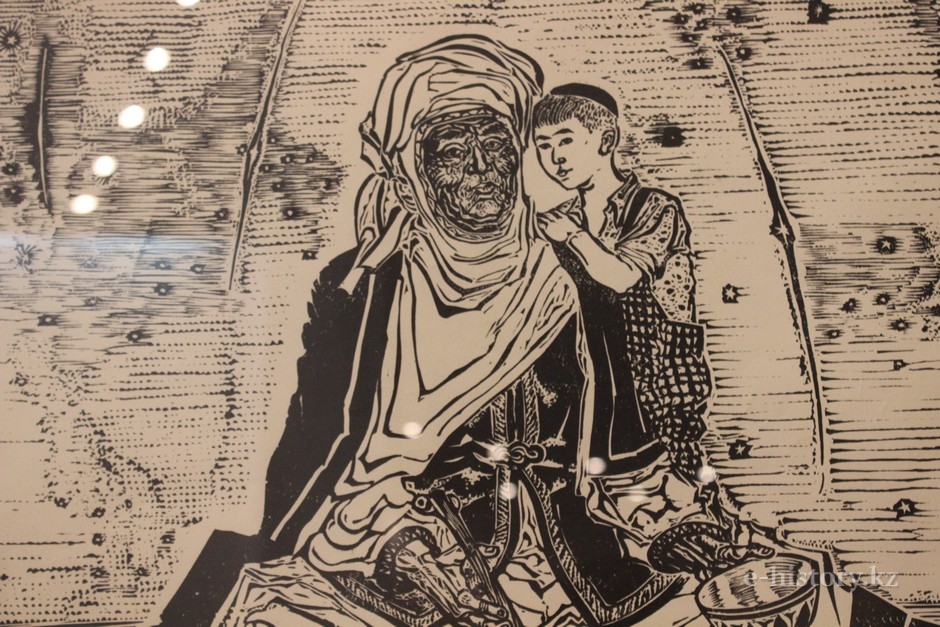 Works of the famous artist Isatay Isabayev are included in the golden fund of fine art. He is an author of more than one thousand easel, graphic and pictorial works which were illustrated hundred his works.

Works of the sculptors and artists-graphist of 60’s of the 20th century are heritage of Kazakhstan’s culture. Having been just created, they became so alive, talented, figurative, comprehended and rich that turned into classical works of national art.

Use of materials for publication, commercial use, or distribution requires written or oral permission from the Board of Editors or the author. Hyperlink to Qazaqstan tarihy portal is necessary. All rights reserved by the Law RK “On author’s rights and related rights”. To request authorization email to mail@e-history.kz or call to 8 (7172) 57 60 13 (in - 1163)
Қазақша Русский English
MOST READ
Month Year
Kazakh historical drama Tomiris premiered in Istanbul
ALASH IDEA IS THE PROTECTION OF KAZAKH STATEHOOD
Stolypin about the worries and hopes of immigrants to the Kazakh steppes
A tireless explorer of the Kazakh land
SWITCHING TO THE LATIN ALPHABET – UNITE ALL KAZAKH PEOPLE
Kunaev Dinmukhamed Akhmedovich
People who eat horses will kill you
Kazakhstan's participation in the Winter Olympics has a long history
Rebooting a field of science and education
Recorded history of Kazakhstan. Part 1
Historical Dates on the Bosphorus
Recorded history of Kazakhstan. Part 2
Materials on theme
The great Kazakh producer
History through the eyes of tourist: “Golden man” – as the symbol of historical culture
Astana hosts an exhibition to celebrate the 100th anniversary of Zhumabek Tashenev
The Kazakh National Superstitions and Beliefs