Coal centre of the planet 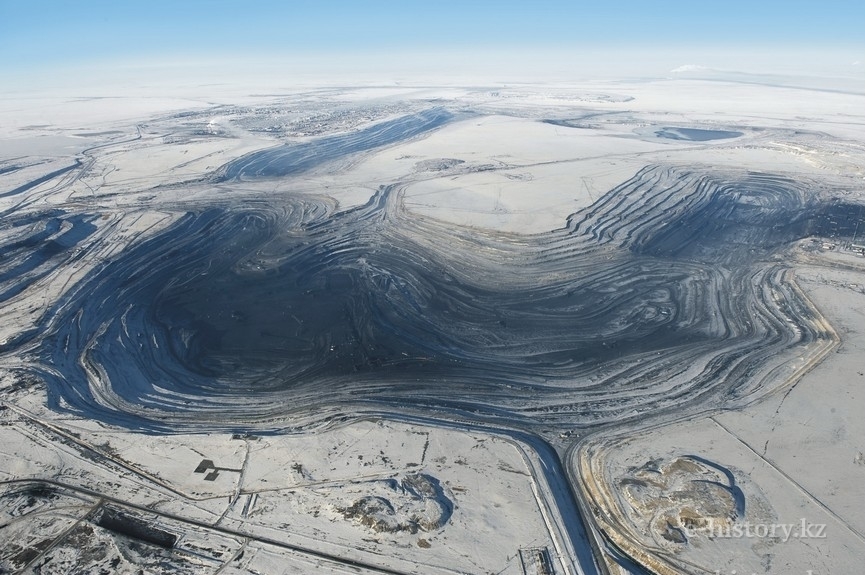 Today the Ekibastuz coal basin and its legendary opencast mine “Bogatyr” have new names but remain be known as the biggest coal deposit in Kazakhstan.

The Republic of Kazakhstan has more than 100 coal deposits. Around 40 of them are the most extensively studied. Most deposits are located in the central part of the country. Ekibastuz, Karagandy and Maykubinsk coal basins, Shubarkolskoe and Borlo coal deposits, and so on are exploited. In total coal reserves in Kazakhstan are estimated at 150-160 billion tons. Scientists believe that Kazakhstan has the capability to sustain the level of coal production for more than the next 200 years. 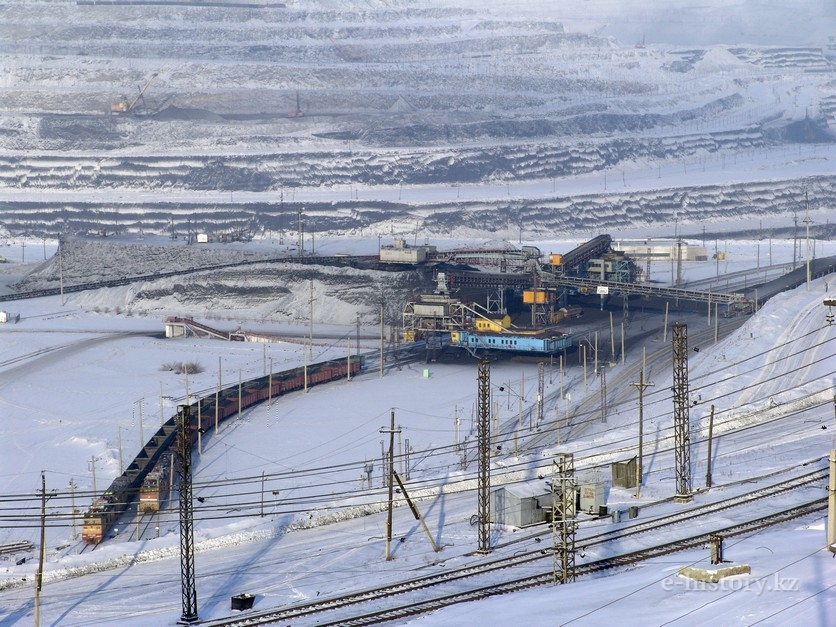 There are several opencast mines in the territory of the Ekibastuz coal basin, but the "Bogatyr" has the highest capacity. It is the biggest mine in Kazakhstan and in the world. Its planned capacity is 50 million tons of coal annually. Nowadays the Ekibastuz provides the biggest electric power plants with coal both inside the country and abroad.

Ekibastuz coal deposit was discovered in the second half of the 19th century in Bayanaul area, Pavlodar region.

In 1886 a self-taught geologist Kosum Pshembaev found the deposit by chance. He marked this place by two salt blocks, which he had brought from a nearby lake, hence the name of this place — "Eki bas tuz" ("Two salt blocks").

In the late 19th century Artemiy Derov, merchant and millionaire from Pavlodar, became interested in Ekibastuz coal. After the series of successful and unsuccessful attempts to conduct exploration, it was made a decision to extract coal by deep mining. The merchant didn’t have enough money. Drawing on support from major patrons Derov established a joint-stock company for extraction of Ekibastuz coal. Later it was named "Voskresenskoe".

In 1895 merchant Derov and Kosum Pshembaev opened three exploration pits, including Vladimirskaya, Marinovskaya and Olgovskaya. In 1896 the Head of the West-Siberian Mining Party A. A. Krasnopolskiy sent his helper, senior engineer A. K. Meyser, to the deposit. Four months he conducted a detailed exploration of the deposit. Later a famous French mining engineer George de Catelan arrived to Ekibastuz. In his book entitled "Essays on Exploration of A. I. Derov’s Reserves in Southern Siberia", published in 1987 in Paris, he wrote the following: "Ekibastuz coal deposit is huge; we even don’t believe that the same reserve of mineral fuel could exist in Europe".

At this period, economic exploration of the Ekibastuz coal reserve began. A small village for workers of the same name was built on the western bank of Ekibastuz Lake.

As a famous inventor, scientist and journalist Novikov wrote in his book entitled "Ekibastuz", before the October Revolution the Ekibastuz coal mines were the biggest in Kazakhstan. Ekibastuz became the most important centre for that time. Coal mines, lead, zinc, iron and brick plants, workshops, power plant, sawmill and railway operated there. In 1918 the Ekibastuz deposit was nationalized. It opened the Soviet page in the history of the deposit.

In 1939 the Soviet Government made a decision to restart coal mining in Ekibastuz and to build opencast mines. At that time the trust "Ekibastuzugol" was established; in the settlement of Ekibastuz the restoration of old buildings was begun.

After the war, in 1947, a design of the Irtysh coal opencast mine № 1 was developed and approved. It became the first mine in Ekibastuz. In summer 1948 construction of the first coal mine and the city of Ekibastuz started. On site of the future town w builders organized a tent camp. Shortly after the first one-floor houses were constructed.

In 1954 the development of virgin lands resulted in the first grain yield. That was a great achievement. The country was proud of it. In the same year, not far from the virgin territory miners from Ekibastuz developed the coal field. On December 25, 1954 the first coal from Ekibastuz was loaded into wagons. This day became a historic for miners in Ekibastuz. Today the bucket which was used for extraction of the first tons of coal is installed on a pedestal at the station square in Ekibastuz. It is a symbol of the hard labour. On June 12, 1957 the settlement of Ekibastuz gained a status of town of the same name. At that time, its population had already reached 25 thousand people. 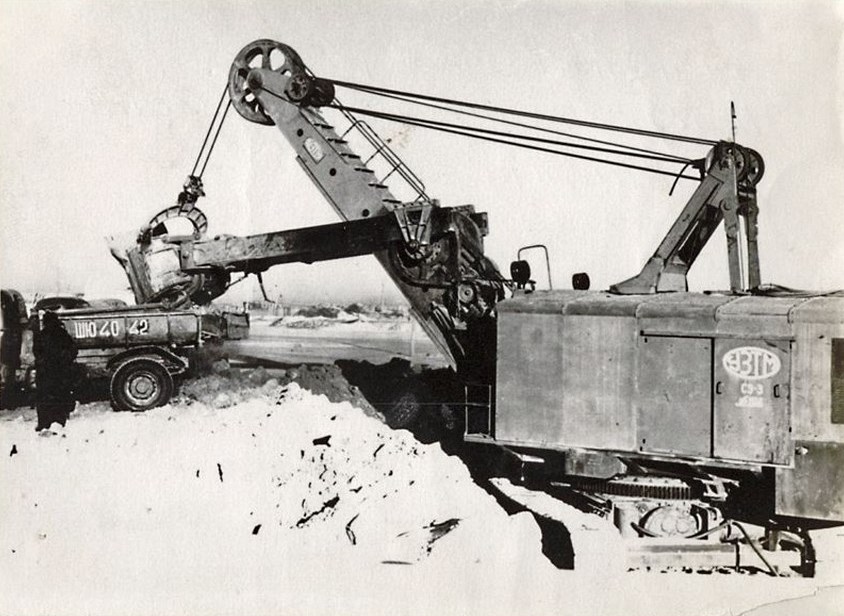 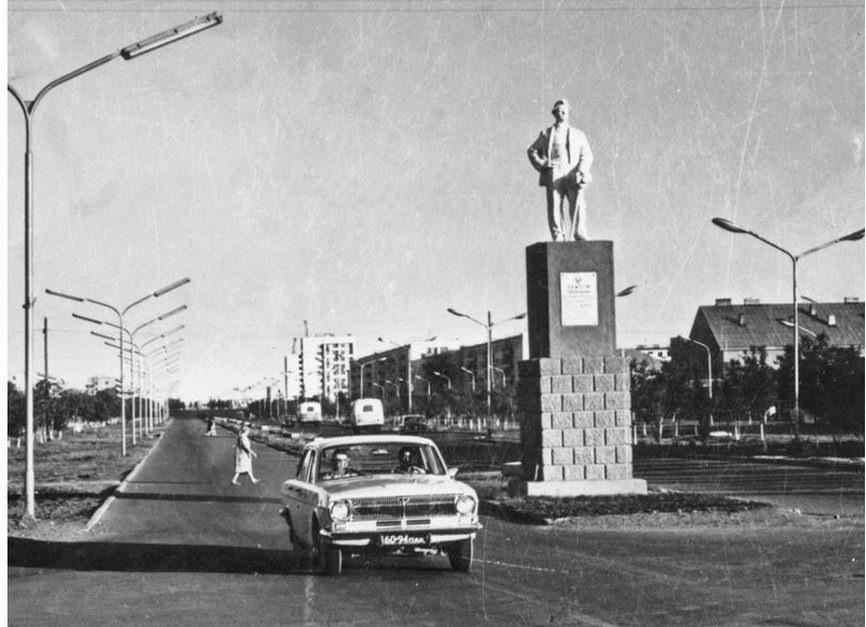 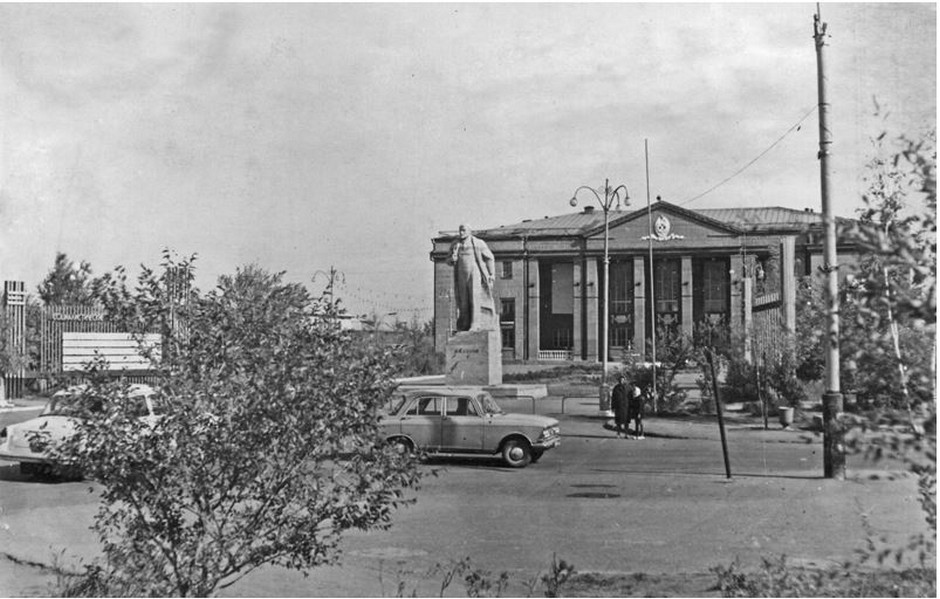 Birth of the "Bogatyr"

By January 1967 100 million tons of coal were extracted from the Ekibastuz basin. In June 1970 the trust "Irtyshugol" was reorganised into a plant named "Ekibastuzugol". In the same year, reconstruction of the Irtysh mines № 1, 2 and 3 was completed. The Irtysh coal mine № 1 was renamed "Tsentralnyy" ("Central"), mine № 2 — "Zapadnyy" ("Western"), Northern stripping mine became "Severnyy" ("Northern") and Southern stripping mine — "Yuzhnyy" ("Southern"). One year later the Irtysh mines № 5 and № 6 was renamed the mine "Bogatyr". 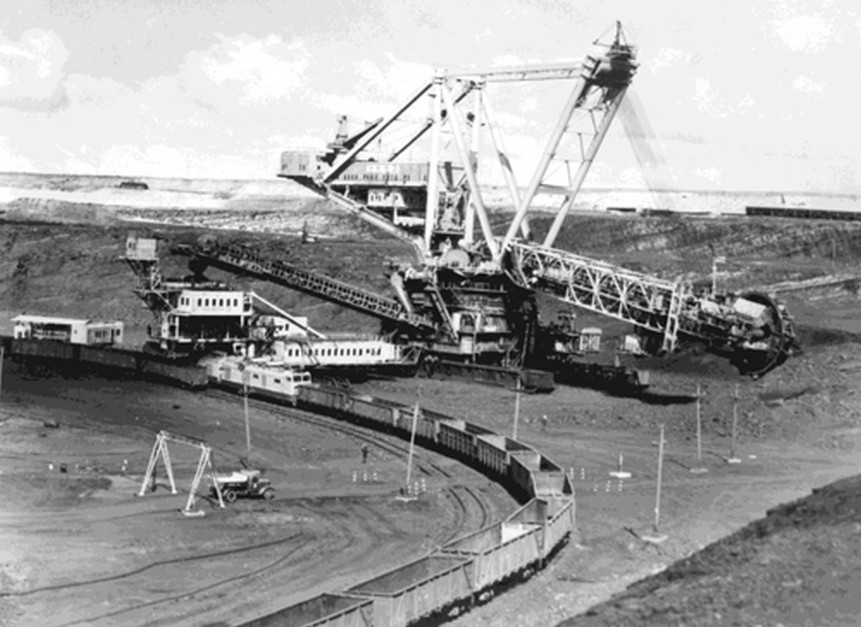 In the late 1980s dozens of power plants in Kazakhstan, Siberia and Urals worked on the fuel from Ekibastuz. Coal mining in the Ekibastuz mining in 1988 reached 89.7 million tons, representing more than 12% of the total coal mining in the USSR. Ekibastuz coal fields were a polygon for testing new technologies. Many of them were later used in other parts of the Soviet Union. Production of the "Ekibastuzugol" was higher than mines in the USA, Germany, Czechoslovakia and Poland. 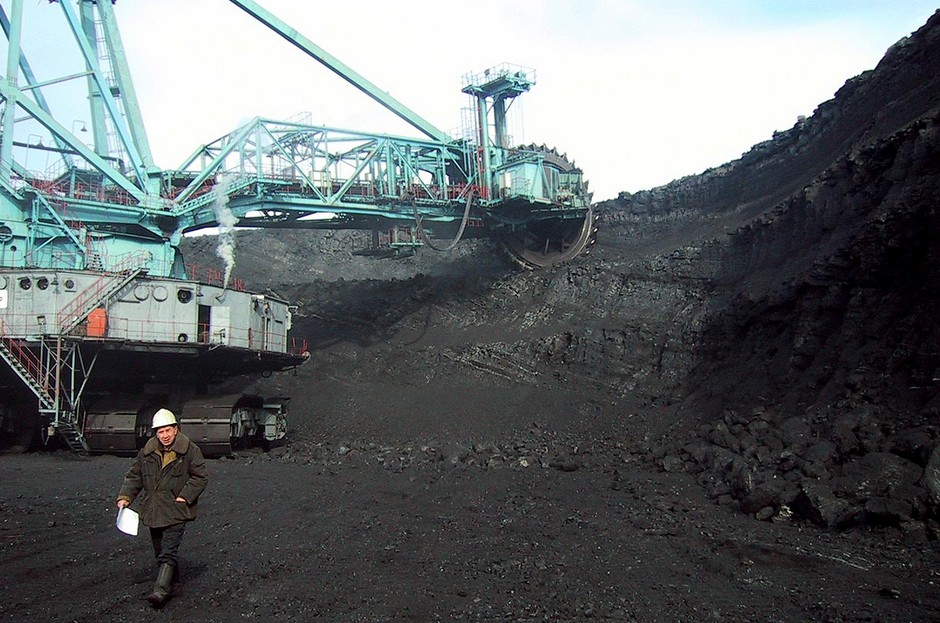 However, the further collapse of the USSR provoked irreversible changes in social and economic satiation in Ekibastuz. Ekibastuz coal demand failed sharply, livelihoods of people living in Ekibastuz decreased considerably. On April 1, 1996 once-prosperous Soviet coal mining enterprise stopped operating. The country experienced the first strike of miners in Ekibastuz who demanded their salaries for the past period.

At that new difficult time of transition to market economy the Government of the Republic of Kazakhstan decided to pass the enterprise to foreign investors. In August 1996 the Government announced the open tender for selling the property of several mines. The tender started in September. As a result, the mines "Bogatyr", "Vostochnyy", "Severnyy", "Stepnoy" and "Maykubenskiy" were transferred to private companies. Therefore, American "Access Industries" became the owner of all assets of the "Bogatyr". One year later its subsidiary, Bogatyr Access Komir LLP, was established in Ekibastuz. In March 2009 it was renamed Bogatyr Komir LLP.

Today the company is the leader of coal industry in Kazakhstan. 14 power plants and industrial enterprises in Kazakhstan and 6 power plants in Russia operate using the coal from "Bogatur" mine. "Bogatyr Komir" makes significant contribution to social and economic development of the city of Ekibastuz and implements major investment projects within the frameworks of the state programme for expedited industrial and innovation development. 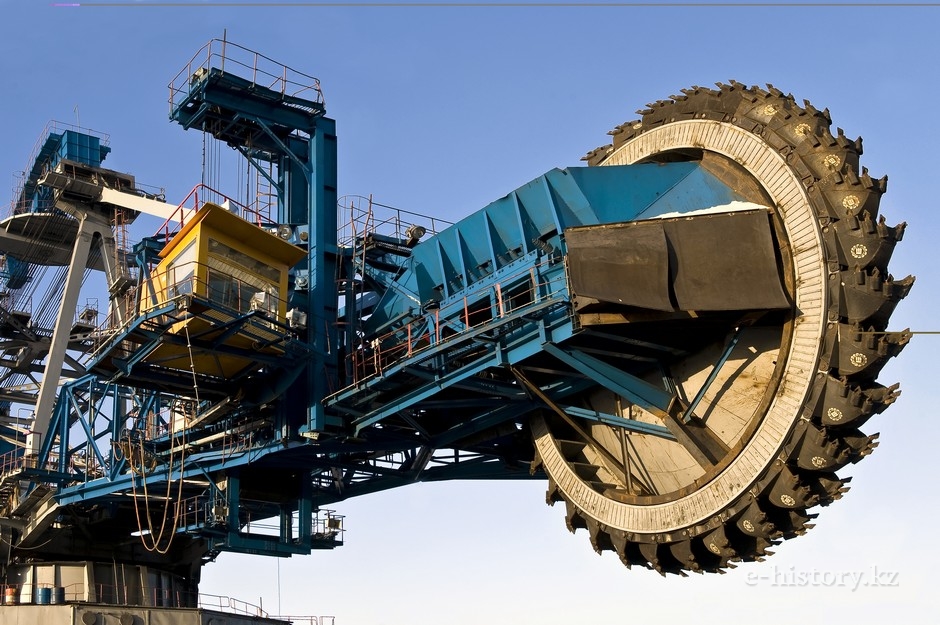 7 thousand people work there. "Bogatyr Komir" provides financial support to many projects in Pavlodar region and Ekibastuz. It also allocates over 500 million tenge for sponsorship. 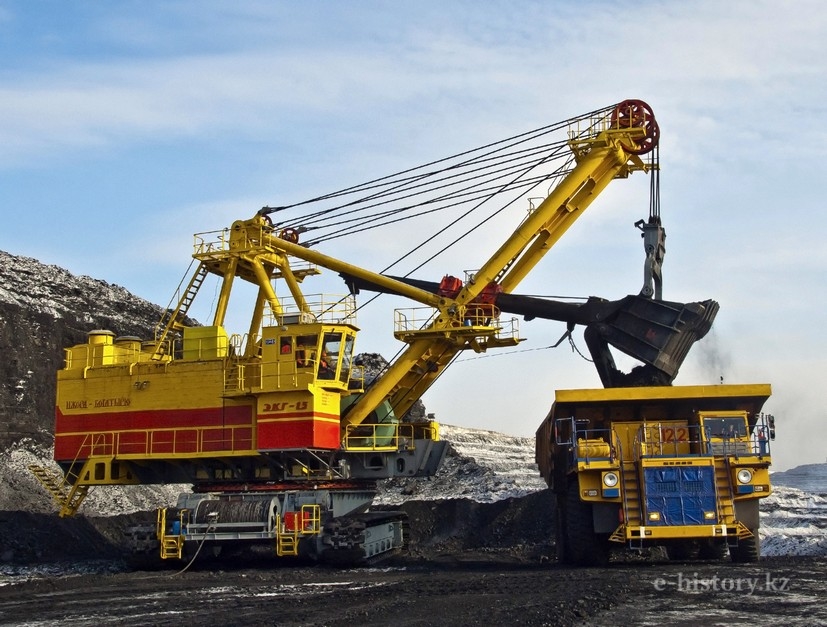 To date, "Bogatyr Komir" facilitates the changeover to new technologies. It is aimed at upgrading the efficiency of production and improving ecological situation in the region.

Use of materials for publication, commercial use, or distribution requires written or oral permission from the Board of Editors or the author. Hyperlink to Qazaqstan tarihy portal is necessary. All rights reserved by the Law RK “On author’s rights and related rights”. To request authorization email to mail@e-history.kz or call to 8 (7172) 57 60 13 (in - 1163)
Қазақша Русский English
MOST READ
Month Year
Recorded history of Kazakhstan. Part 2
Heroic mothers of the great steppe
How had the World War II been started?
Philosophy of the Emblem
14 monuments at Tekturmas
The rural akims: the country's hope is in the elections
Kazakh historical drama Tomiris premiered in Istanbul
Stolypin about the worries and hopes of immigrants to the Kazakh steppes
ALASH IDEA IS THE PROTECTION OF KAZAKH STATEHOOD
A tireless explorer of the Kazakh land
SWITCHING TO THE LATIN ALPHABET – UNITE ALL KAZAKH PEOPLE
Kunaev Dinmukhamed Akhmedovich
People who eat horses will kill you
Materials on theme
Kazakhstan army: What was achieved untill the anniversary?
The results of the scientific trips of Kazakhstani historians and archivists to the major international archival centers
The brave soldier of the Great Patriotic War
National Museum presents exhibits from Karaganda region