Formation of a new Kazakhstan 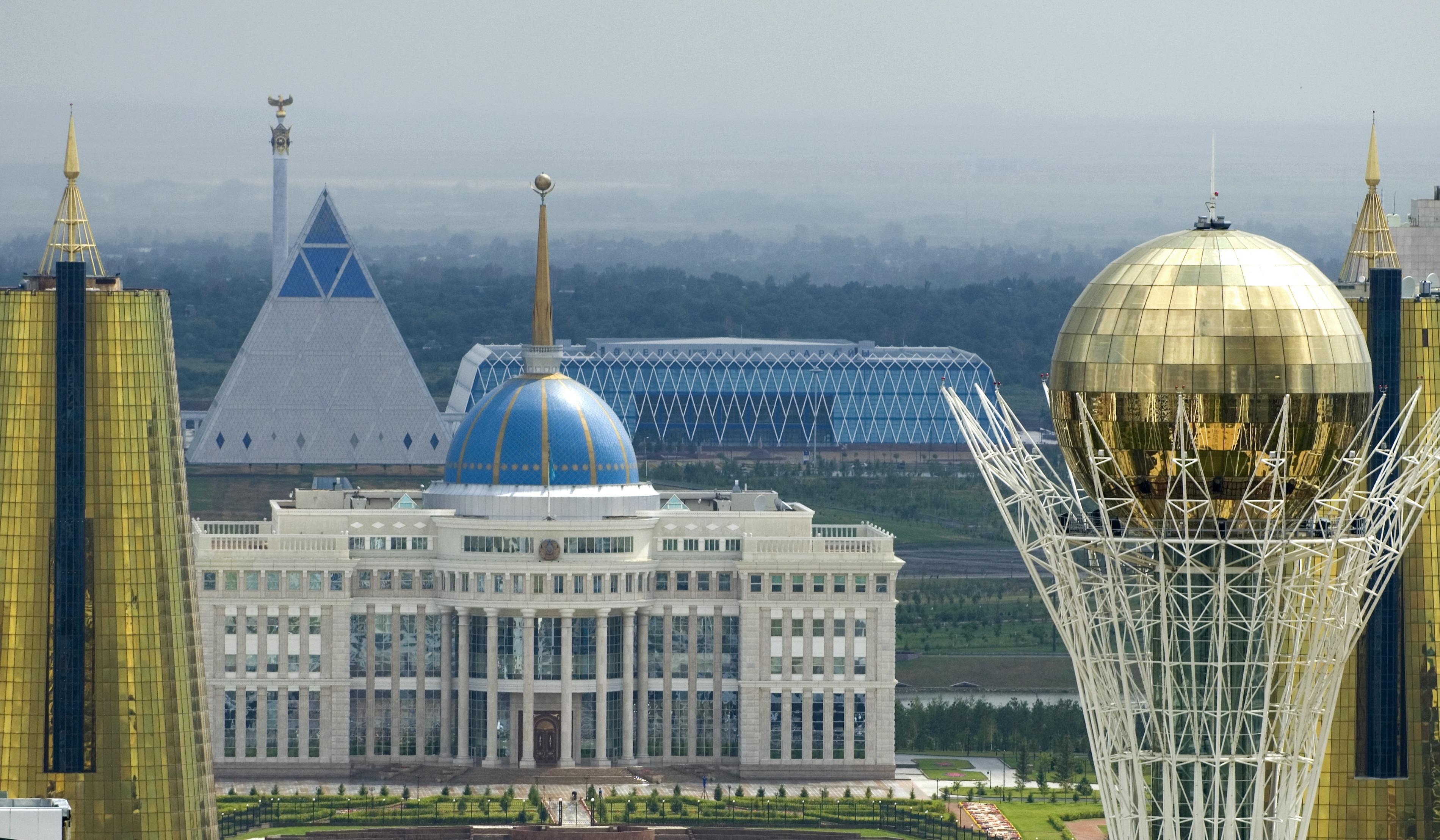 Formation of the new state is in many respects similar to the birth of a new star. Some stars are born feeble and quickly burn down. Others become brighter over time and illuminate a way to mankind.

"Success is not final, failure is not fatal: it is the courage to continue that counts".
Winston Churchill

Historical processes that have been promptly developed on the territory of Kazakhstan showed their viability. In the 80-90s of the 20th century these processes only gained strength, acquiring an acceleration vector. Kazakhstan should start building the system responding to the purposes of individual-innovative development from a zero cycle. Entire way of modernization of society was led by the First President of Kazakhstan N. Nazarbayev with assistance of most of citizens of the multinational state.

Experienced politician and leader of Singapore, Lee Kuang Yu was confident in inevitable collapse of the USSR, but at the same time "with genuine he was confident anticipating a great future of Kazakhstan. Despite that many people at that time considered his words as diplomatic compliment of eastern guest, time shoed that they prophetic" — wrote the President of Kazakhstan in his book "Kazakhstan’s Way".

In a short period of time the framework of modern statehood with aseismic belt of security around its perimeter was built. There was a transition from totalitarian domination of CPSU to democratic values, from socialist forms of economy to the market economy. By overcoming stereotypes of thinking a new social consciousness, adequate to an essence of the conversion which are carried out in the country was created. At the turn of the century Kazakhstan already had clear, steady economic strategy and economic practice of the Kazakhstan way of development. This model was caused not only by intention, concept, plan the country’s leader, but also the resources of Kazakhstan, its geopolitical location, history and traditions, culture and even the «morality of his work" [1].

The republic headed by the President managed not only to save stability, but also to begin process of formation of the Kazakhstan statehood. It had no single universal decision or some uniform algorithm for a transient period. Hard work on search of the unique way of development, global vision of the world, which allows understanding of what place Kazakhstan on a world map, should take. "We were always open for a dialog, listened to new and unfamiliar ideas, positively perceived criticism in our address. If experience of other countries was interesting to us, we safely adopted and implemented it at ourselves" [2]. The formation of Kazakhstan statehood went through trial and error method. The study of experience of the leading countries of the world and world leaders, such as Margaret Thatcher, François Mitterrand, Helmut Kohl, George Bush Sr., Lie Kuang Yu, John Paul II and many others, gave pulses to speculation and gave confidence in correctness of the selected way.

Further huge mental work allowed the President of Kazakhstan to define the peculiar way of development which does not have analogs in a pattern, assuming the synchronous upgrade of the principal postulated of the Kazakhstan society: formation and solidifying of statehood, market model of economy, democratic principles which main factor was the person and his problems. Implementation of planned and achievements allowed Kazakhstan, undoubtedly recognize N. Nazarbayev as a Leader of the Nation.

"It was necessary to comprehend an essence of the occurred radical changes, to foresee tendencies of further development, to select the most effective strategy of conversions, which respond to the interests of tens of millions of people, in a short period of time. The history did not allow time for the long researches and philosophy. The world had been changed with increasing speed. We had to adapt not only economic system, but also the general state system, beginning from it bases, and even thinking of each Kazakhstan citizen. Moreover, it can be said that we were in the position of "catching up the whole world" — recalled the beginning of a hard way of Kazakhstan its Leader in his book "Kazakhstan’s Ways".

After the national election, which took place in December 1, 1991, after which N. Nazarbayev was elected the President of the country, followed the historic step which defined the entire way of Kazakhstan’s development as the independent state. On December 10, 1991, in the inauguration day of the President, at the seventh session of the Supreme Council the decision on renaming Kazakh SSR into the Republic of Kazakhstan [3].

The President called the Kazakhs society to make all effort so that in the shortest possible time to turn sovereign Kazakhstan "into independent subject of the international relations, the active character of world economic space". All strategic initiatives were constitutionally fixed by the Law "About the State Independence of the Republic of Kazakhstan“ dated December 16, 1991.

Kazakhstan from its first moment of declaration of sovereignty was recognized by many countries of the world. President received a lot of congratulatory messages with acts of official recognition of independence of the Republic of Kazakhstan from the heads of Turkey, Romania, Slovenia, USA, Ireland, Egypt, Afghanistan and other countries. Establishment of diplomatic relations, the international cooperation in economy, development of communications in the sphere of culture had begun. From this point Kazakhstan began to count its independence. The republic took the first steps on establishment of integration communication on the Eurasian site.

The situation was very difficult for the country. The work was carried in all directions — from foreign policy to stabilization within the country. The collapse of the USSR which entailed final corrupting of economic communication with the adjacent states, legal chaos in the former Soviet Union became threat to the republic sovereignty. Carinal economic reform and integration of the republic in the world community slowed down. Developing steps in the economy became the basis of Kazakhstan’s prosperity. First of all, the President of the state moved his entire attention towards fight against economic ruin, on a reconstruction of old and establishment of new economic relations and rise welfare of Kazakhstan citizens. It was the difficult way to find optimal solution that satisfies the interests of all Kazakhstan society, on which the future of the country was relied on.

The factor of time had huge value during crisis. Increasing tension in the republics of the former Soviet Union, sharpness of those problems which Kazakhstan had to face in the coming months, did not leave time for the thinking, forced to act quickly, decisively and clearly. "History has left us with no choice but to drastic changes of economic relations. And turn to a market economy was necessary" — said the President [4].

New life, new era for all Kazakhstan citizens has begun. We were inspired and our thoughts were filled with enthusiasm. Every day was equivalent to a month, and the month to the year, we had been working with particular enthusiasm, with feeling of independence. It became normal phenomenon that in any organization, at the enterprises, even in educational institutions, on the streets and in squares the organization of meeting by the initiative groups. Problems of economy and socio-political issues have been increased, turning into one pile" — Kuanysh Sultanov, the chairman of Committee of Parliament of the Republic of Kazakhstan on the International Relations, Defense and Safety [5].

1. R. Medvedev, Economic of the Commonwealth countries. At different speeds and on different roads//Economic strategy — Central Asia. 2006. No. 3;

Material from the book "Independent Kazakhstan and the Leader of the Nation (the Contemporary history of Kazakhstan and a historical role of the First President N. Nazarbayev)" Institute of history of the state of MES RK, Almaty, 2010.

Use of materials for publication, commercial use, or distribution requires written or oral permission from the Board of Editors or the author. Hyperlink to Qazaqstan tarihy portal is necessary. All rights reserved by the Law RK “On author’s rights and related rights”. To request authorization email to mail@e-history.kz or call to 8 (7172) 57 60 13 (in - 1163)
Қазақша Русский English
MOST READ
Month Year
Recorded history of Kazakhstan. Part 2
Heroic mothers of the great steppe
How had the World War II been started?
Philosophy of the Emblem
14 monuments at Tekturmas
The rural akims: the country's hope is in the elections
Kazakh historical drama Tomiris premiered in Istanbul
Stolypin about the worries and hopes of immigrants to the Kazakh steppes
ALASH IDEA IS THE PROTECTION OF KAZAKH STATEHOOD
A tireless explorer of the Kazakh land
SWITCHING TO THE LATIN ALPHABET – UNITE ALL KAZAKH PEOPLE
Kunaev Dinmukhamed Akhmedovich
People who eat horses will kill you
Materials on theme
Kazakh musical instruments
Archaeologists discovered the mausoleum of Zhanibek 5 years ago
Ukrainian page in the history of Kazakhstan nation
The history of resettlement of Turks Ahyska to Kazakhstan