Home News Exhibition in the Museum of the First President of Kazakhstan “Historical choice. Creation”

Exhibition in the Museum of the First President of Kazakhstan “Historical choice. Creation” 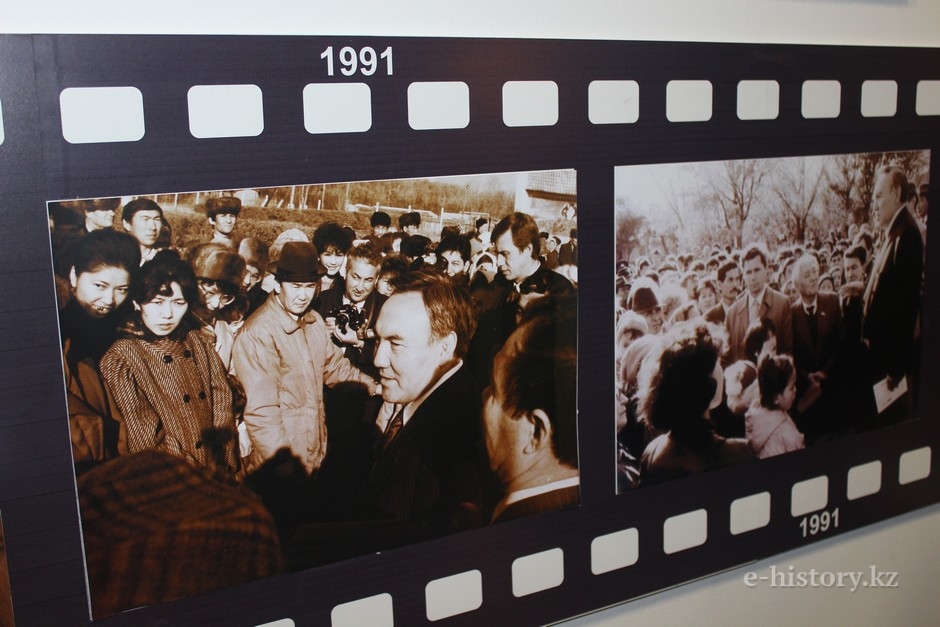 The opening of exhibition “Historical choice. Creation”, which shows the first steps of formation of the new state in 1991-1995, was held in the Museum of the First President of Kazakhstan.

The first half of the 1990 entered to history of Kazakhstan as the period of the actual formation of the new country, creation of the base of the state, the first years of its difficult formation and the beginning of recognition from the world community. Everything was for the first time for Kazakhstan and its leader.

N. Nazarbayev’s colleague, the first Minister of Foreign Affairs of Kazakhstan, the Doctor of Political Sciences Tuleutay Suleymenov opened a documentary exhibition of the first independent steps of the independent state. He as nobody else knows how the new country was recognized in the world, as the President lifted the country and made decisions, crucial for people of Kazakhstan. 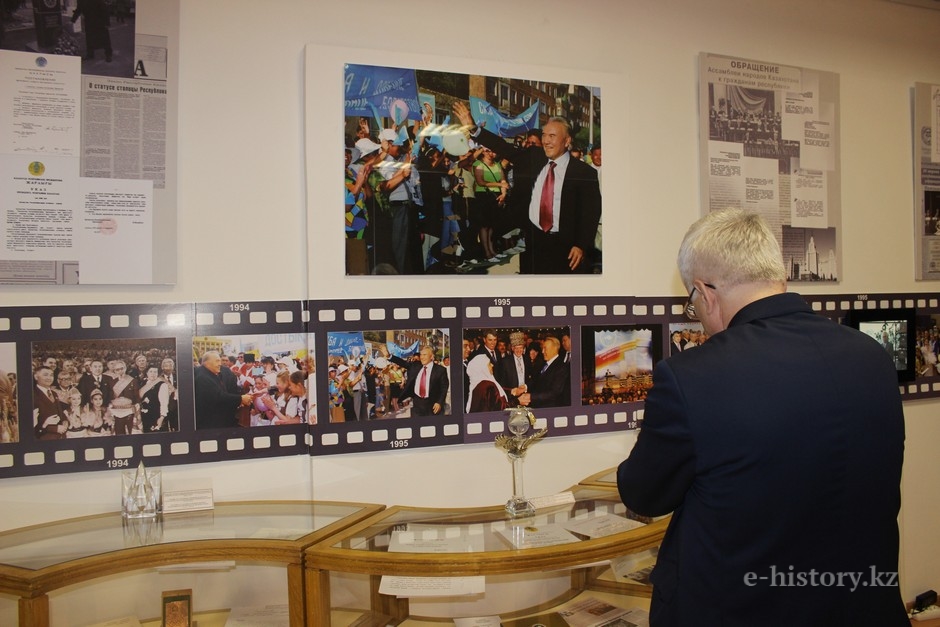 "The choice indeed was historical: what way to go and what state we should build. The President made a right choice — to build the democratic free secular state. Today, I recall those years when we were young, full of strengths, served to country and people. Our President served, serves and will serve to people of Kazakhstan. In 1993, N. Nazarbayev spoke in front of diplomatic corps and the public of the USA. And many Americans spoke to me: "You are lucky, Mr. Minister that your country is led by the President Nazarbayev. Bright future is waiting for Kazakhstan", — shared memories the first Minister of Foreign Affairs of Kazakhstan Tuleutay Suleymenov.

The key reforms, which aimed at the transition from communism to democratic freedom and economic multiculturalism, were implemented in difficult period for country from 1991 to 1995. 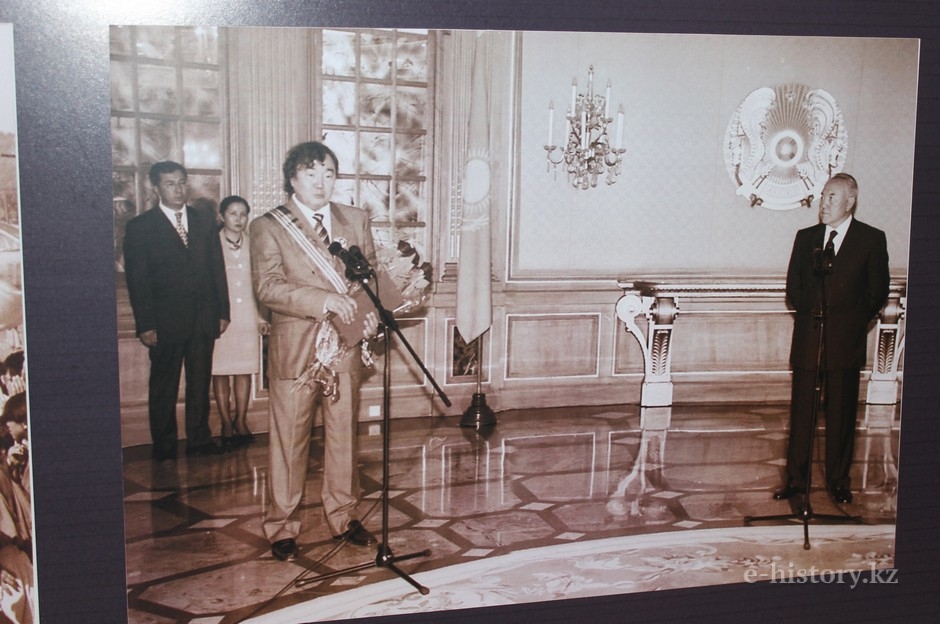 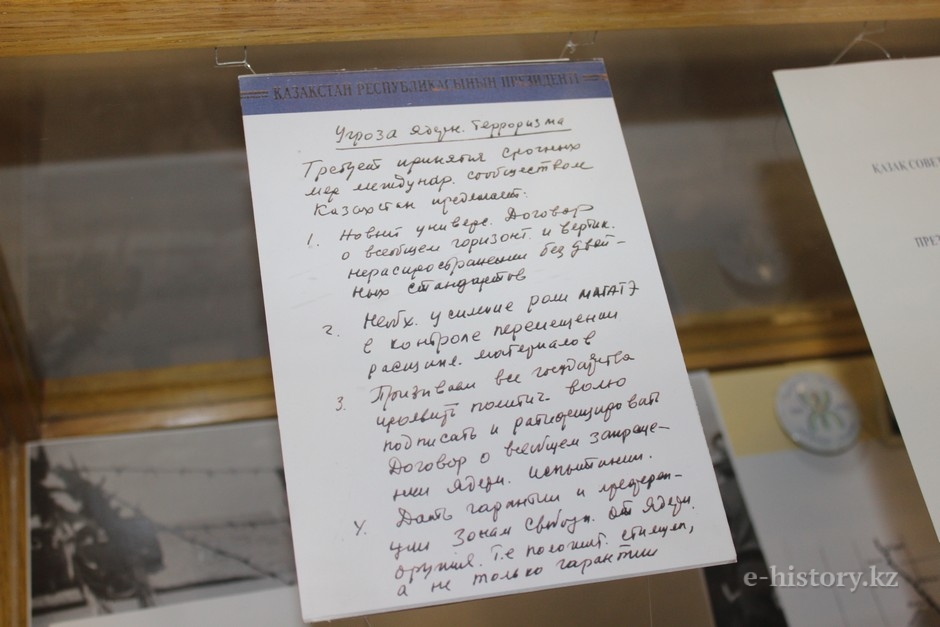 Visitors of an exhibition will see the unique archive materials that witness renunciation from nuclear weapons, finding of the state characters, transition to national currency, appearance and acceptance of the Constitution of Kazakhstan, formation of idea of the Eurasian Union and other events, crucial for the country. 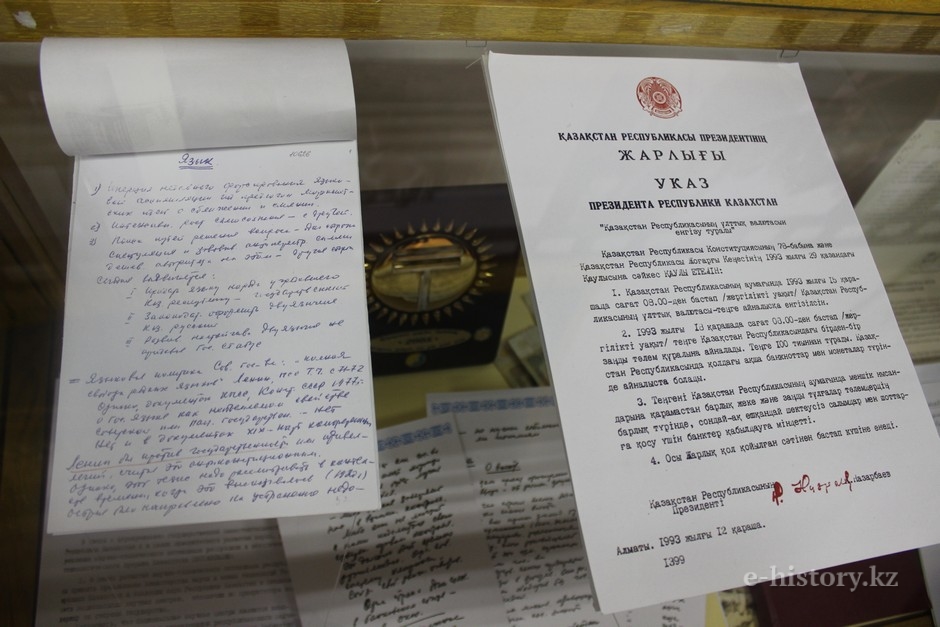 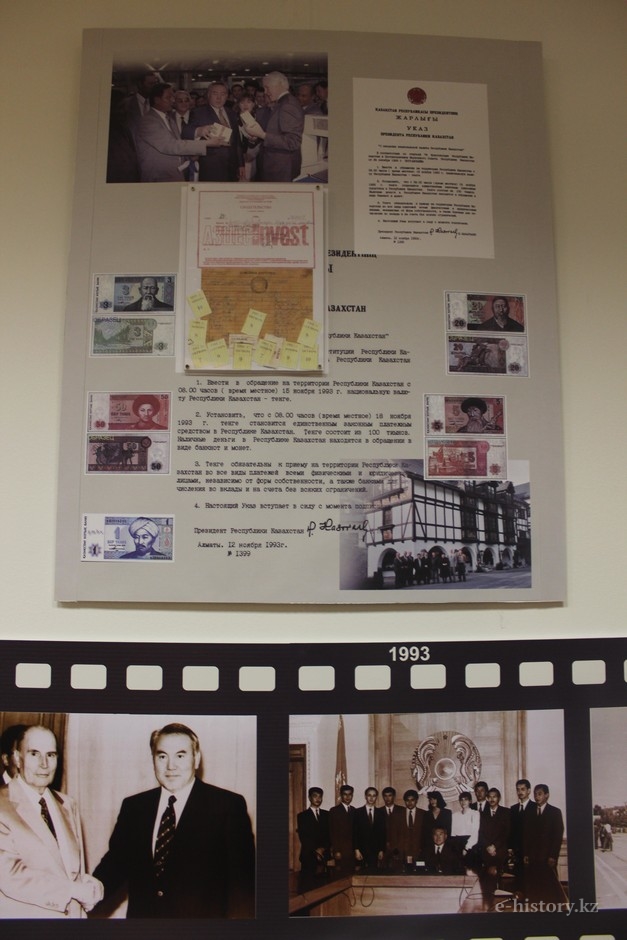 Honored lawyer, Professor Zinaida Fedotova, who led the working group of writing the Constitution of Kazakhstan from 1991 to 1995, became the guest of an exhibition. At that time the foundation for a political system, basic rights and freedoms of the people of Kazakhstan was laid. 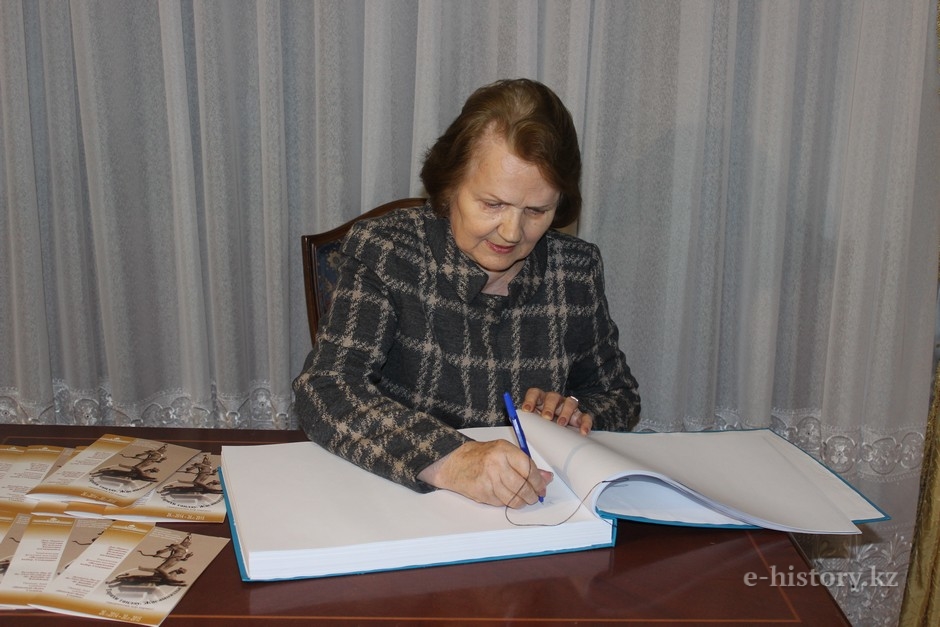 "From 1991 to 2005, I was the witness and with my involvement was created the legislative base of Kazakhstan. I was a developer, headed the working group and was the deputy chairman of the Supreme Council and all legislation went through my control", — said Zinaida Fedotova about creation of the Constitution of Kazakhstan.

Introduction of a post of the President of Kazakhstan took place on April 24, 1990. The Supreme Council adopted the law on establishment of a post of the president and elected him. According to Zinaida Fedotova, it was the difficult transient period, president faced with many other tasks despite of leading the republic. "All the time Nursultan Nazarbayev, was at parliament as the new legislative base was created, it was necessary do not make a wrong choice of a further was of development of the new state. There were many economic problems therefore it was necessary also to be at the Government. At the same time the international cooperation was actively established. Thus, the question of election of him as the President in public, in order to delegate him the rights of the head of state had been raised. The parliament adopted the law on choices as before it was not existed and in 1991 N. Nazarbayev was elected the President of Kazakhstan. 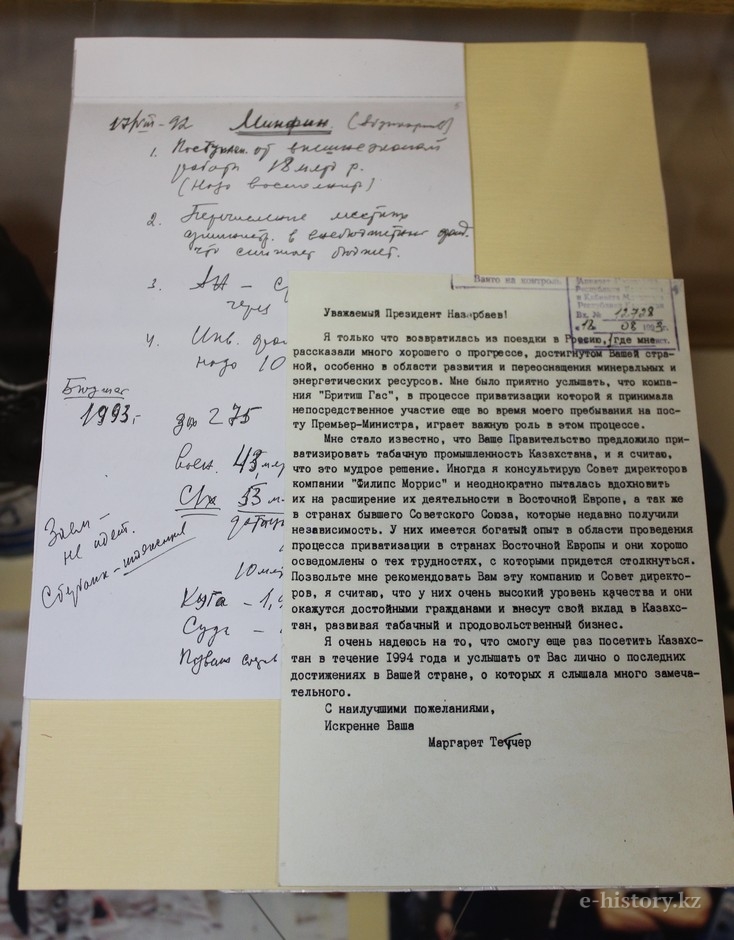 At that time there was no constitution, there was a Constitution of Kazakh SSR, at each meeting of the Supreme Council it was complemented with changes. At the same time the current legislation began to advance norms of the existing fundamental law of the state.There was a question of acceptance of the new constitution", — said Zinaida Fedotova.

The complex, long and very responsible work on creation of the constitution of the new independent state began. In January, 1993, the new Constitution of Kazakhstan was adopted. However, soon there was a question of national acceptance of the basic law. In 1995, the Constitution taking into account all new processes of 1991–1995 was carried out for national discussion and acceptance.

According to Zinaida Fedotova, during her work period, the most difficult was to write the Constitution of the state and the declaration on independence because it was heavy responsibility and it was necessary to consider all moments. "We were faced by the task — not to be mistaken that rules of law were always socially oriented that they met the interests and requests of the people. We worked from morning to the night".

Time has changed, as well as Kazakhstan, therefore in 1995, the new Constitution that considers new realities like very active political and economic activity of the state and high-quality improvement of social sphere, was adopted.

"Certainly, we studied the European and American experience, constitutions of Japan and Australia. However, we looked for and created the model of the fundamental law of the state. We have unusual society: multinational and multi-religious. We have own customs and traditions of development, therefore it is impossible unconsciously transfer someone’s experience. It is necessary to adopt the world’s best experience. And today we are an example for many states, for example, our phenomenon — Assemblies of the people of Kazakhstan" — shares her opinion the honored lawyer of Kazakhstan Zinaida Fedotova.

Exhibition «Historical choice. Creation» will last till January 30, 2015 in the Museum of First President of Kazakhstan.

Materials on theme
Cultural walk: the museum of Ministry of Internal Affairs of the Republic of Kazakhstan
Northern gates of Kazakhstan
What was the composition of the country’s Supreme Soviet of the XII Congress
The Exhibition of the dynasty of painters "Art Triangle"