Batyrs (warriors) are pillar of state 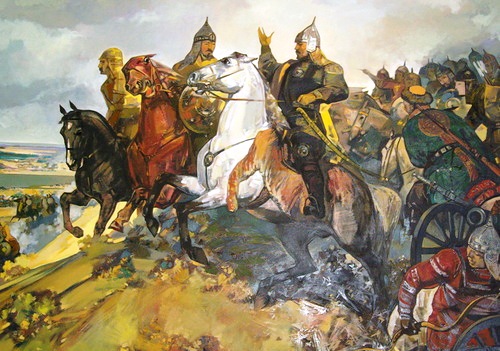 Over centuries valour of Kazakh batyrs had been envisioned by ordinary people. Batyrs had their own culture, art, ideology and moral standards, customs and traditions, and beliefs.

Hero won’t be alone,
If he did good deeds for people.
It was written in our history
"Batyr is a son of a nation"

Despite the importance for their clans batyrs are depicted at rock drawings very modestly. Scientists find so simple and inexpressive pictures telling about batyrs. Frequently, warrior’s chest, hands and legs were indicated by lines, and sometimes — by rectangles. Very often national heroes were depicted as a man whose legs were exaggerated by boots with wide tops, felt stockings and high heels. 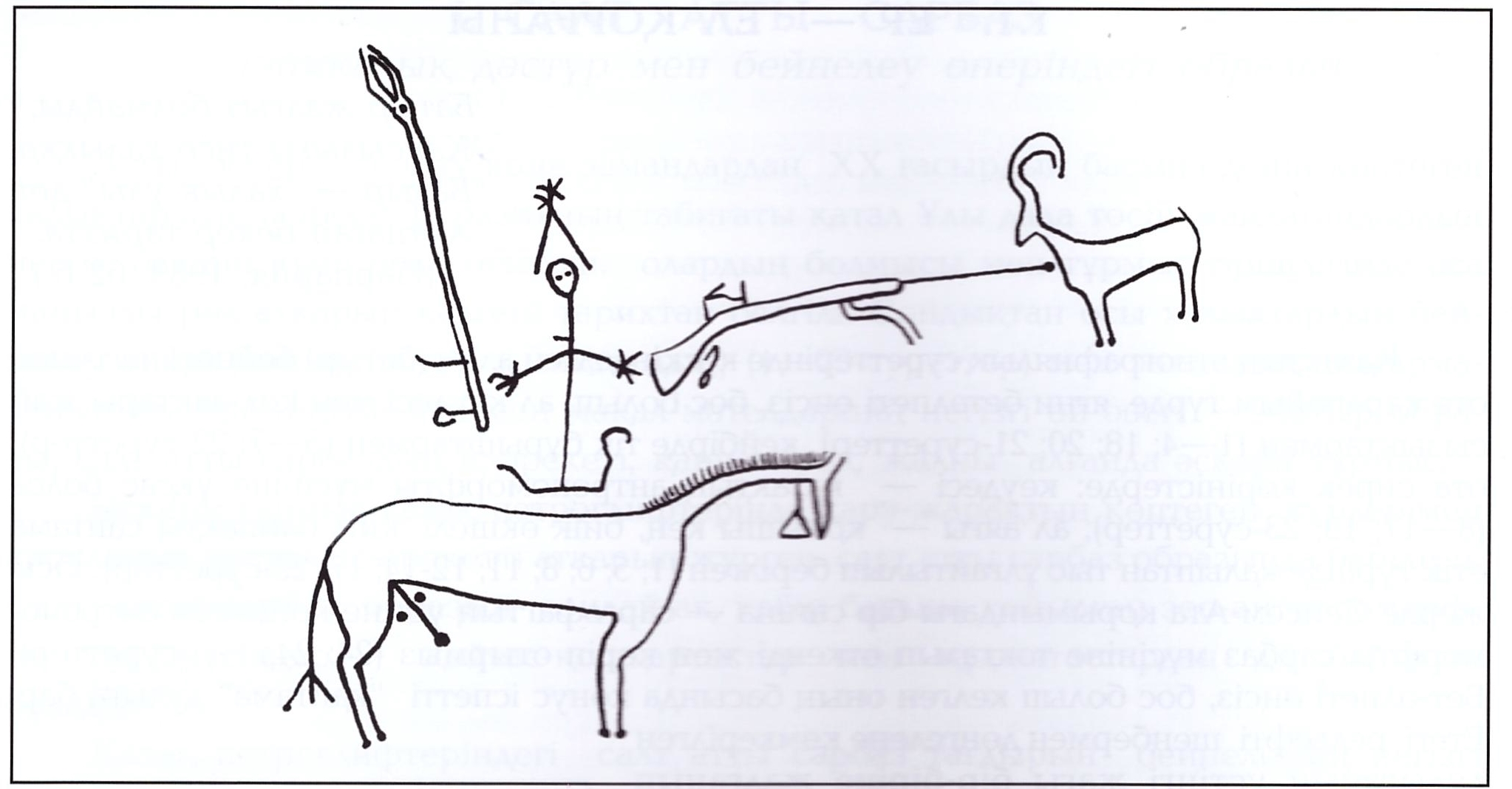 For example, a sculpture of warrior is placed on the Seysem-Ata cemetery. The warrior has discreet features; he wears warm winter hat. The top of boots is decorated by textured pattern in the form of triangle. His shoulders are depicted as a rounded trapeze; the chest of the warrior and pedestal are decorated with shell rock.

The sides of pedestal have dashed lines. Some of them meet straight lines and form tamga — special mark of the Aday tribe, which looks like an "arrow". Such tribal marks can be noticed on the warrior’s shoulders. The man is embodied with the weapon, including sword, axe, long-barreled weapons as well as bow and arrows, various types of "fast-speed" weapons.

Batyr was not only a war hero; he was also a strong and resilient man who turned the military art into his profession and spent all his life in war and continued dynasty of warriors. This social group actively participated in state affairs and was close to Khan. Batyrs had their own culture, art, ideology and moral standards, customs and traditions, and beliefs.

Military art was the main occupation of batyr. Therefore representatives of this social group held weapons until old age. It was the honor for batyrs to die in a battle. This was shown in tolgau (reflection and composition) of Aktamberdi Zhyrau:

"I will tell you all my dreams and wishes,
I dreamed on the death in a battle,
But I am alive; what should I do?"

During the Dzhunghar invasion Olzhabay was in his bed and felt nervous: "Like a messenger of the death a disease affected me; as if somebody condemns me, I am lying on my bed and, probable, will because of this curse".

Military art was transferred from father to son. A child born in batyr’s family from his childhood was prepared for military service and had to participate in battles. Young man from such families had to take revenge for their fathers died on battle field. If batyr didn’t avenge it was equal to the death. 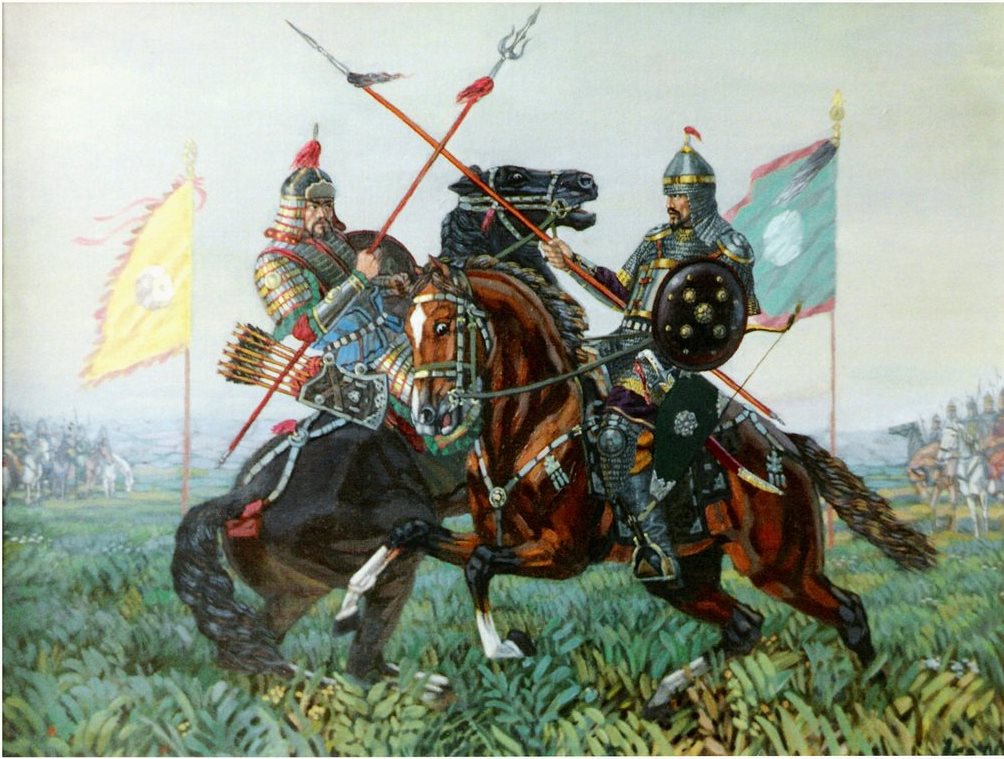 It is also should be noted that batyrs respected honour and dignity of eacj other: "Even if I die, I have fulfilled my wishes. I will leave behind three sons and one daughter. If you die, there will be no any semen; you will not have successors; then come back to you country and experience the happiness of being father... there will be somebody able to take revenge for you" (Zhalgyz zhigit urpaktary, fairy tales, 1989). This speech shows that warrior warns his opponent about the need to leave heirs able to avenge.

The main task for batyrs was to protect the honour of father and his nation. That is why names of batyrs who during all their lives avenged their enemies-offenders of their nation and held weapons riding horses are kept in the memory of people, in their epic poems...

Protection of country from external enemies and preservations of the order within the state borders were the functions of military men. That is why representatives of this social group became khans and rulers of country. For example, Abylay and Kenesary khans both were batyrs; they lived during the same period of time and were born in families of batyrs.

Frequently batyrs served as ambassadors. They were members of the Military Council under the Khan and occupied different high positions, actively interfered in internal and external policy of country and international relations.

"You are an iron, I am a coal,
I have come to make you red-hot,
We are like baby deer,
And I want to introduce him to another mother,
If opposing country will step forward
I will defeat it as well".

Kazybek said this to Dzhunghar Khan to stop the war between the two states and establish peaceful trade relations.

"If you do not agree with me,
Then define a place for battle,
You are a boar, and I am a lion
Arrived to fight" (Torekulov 1993).

Ambassadors achieved their goal by all means. Sometimes they threatened their enemy by false information about their force and power (Kozin, 1947); sometimes loudly screaming out battle cry they unexpectedly, torrentially engaged enemy to defeat his authority (Lipets, 1984).

It is a little known fact that zhyrau — narrators were batyrs; all of them were born in families of batyrs and lived during the period of their existence. Creative work of zhyrau was closely related to ideology of batyrs. For instance, military leader Kaztugan zhyrau, commander during the rule of Yesim Khan — Zhiyenbet zhyrau, batyr of Temir biy — Shalkiiz, as well as Dospanbet who participated in battles (Ay zaman-ay, zaman-ay, 1991).

Epic poems boosted the morale of warriors before fight; zhurau performed eposes about military leaders and batyrs famous for their deeds (Tursynov, 1976), i. e. they were narrators of batyr spirit and apologists of batyrs’ ideology.

Batyrs were hunters. However, hunting wasn’t their main business; in certain circumstances, hunting was their only task as after dzhut (situation when snow is covered with an ice crust and animals die from hunger) it was necessary to find food for their families and fellow villagers. They had to kill wild animals disrupting livestock; it was necessary to preserve and improve their military skills during peacetime.

Translation of article from The Kazakh Petroglyphs by Z. Samashev and Zh. Zhumash, Almaty, 2005

Use of materials for publication, commercial use, or distribution requires written or oral permission from the Board of Editors or the author. Hyperlink to Qazaqstan tarihy portal is necessary. All rights reserved by the Law RK “On author’s rights and related rights”. To request authorization email to mail@e-history.kz or call to 8 (7172) 57 60 13 (in - 1163)
Қазақша Русский English
MOST READ
Month Year
The referendum on the Constitution is a significant stage of democratization
Philosophy of the Emblem
The rural akims: the country's hope is in the elections
Kazakh historical drama Tomiris premiered in Istanbul
Stolypin about the worries and hopes of immigrants to the Kazakh steppes
ALASH IDEA IS THE PROTECTION OF KAZAKH STATEHOOD
A tireless explorer of the Kazakh land
SWITCHING TO THE LATIN ALPHABET – UNITE ALL KAZAKH PEOPLE
Kunaev Dinmukhamed Akhmedovich
People who eat horses will kill you
Kazakhstan's participation in the Winter Olympics has a long history
Rebooting a field of science and education
Recorded history of Kazakhstan. Part 1
Materials on theme
About 2153 historical and cultural monuments were put under the state protection in Western Kazakhstan.
“From the Kazakh Khanate to Independent Kazakhstan” conference
Was it possible to keep the Kazakh khanate?
Alibi Dzhangildin, the first Kazakh to travel around the world