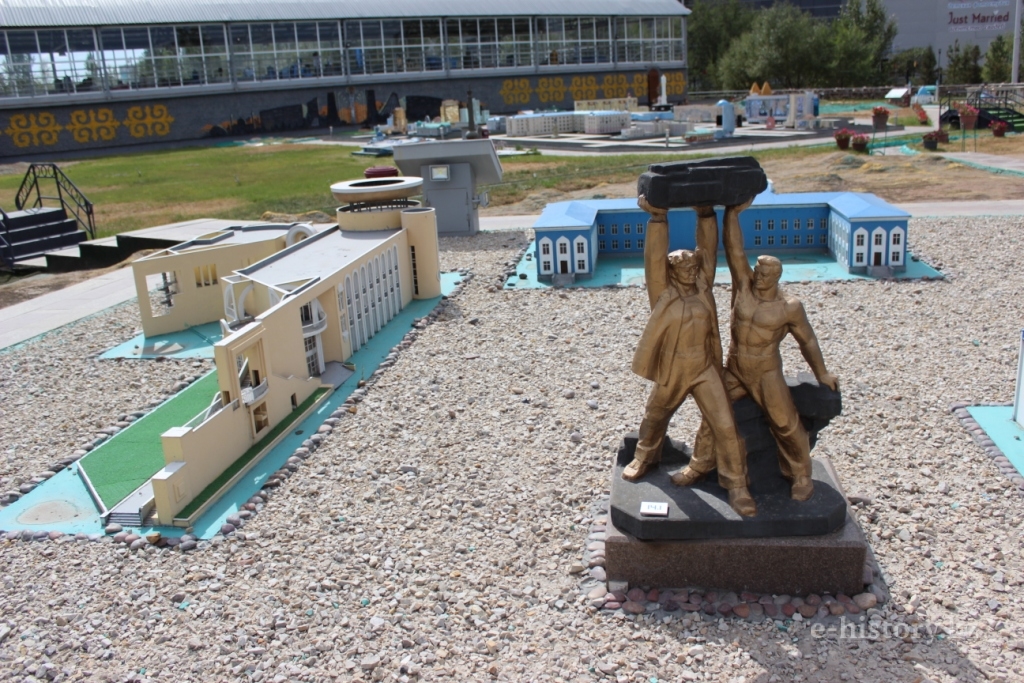 «Kazakhstan’s map «Atameken» — it’s an only CIS ethno-memorial complex in the open air. Today is 13th anniversary of museum complex.

At the end of 90s our President had an idea to create the layout of Kazakh land. In 2001, 1.7 hectares of fourteen Kazakhstan’s region, including two biggest cities — Almaty and Astana, appeared in the square.

Exposure represents boundaries and the location of areas. It reproduces exact copies of the most important tourist attractions and historical sites in each region. It should note that the President’s idea works: Map of Kazakhstan in the open air is impressive and evokes a sense of pride. 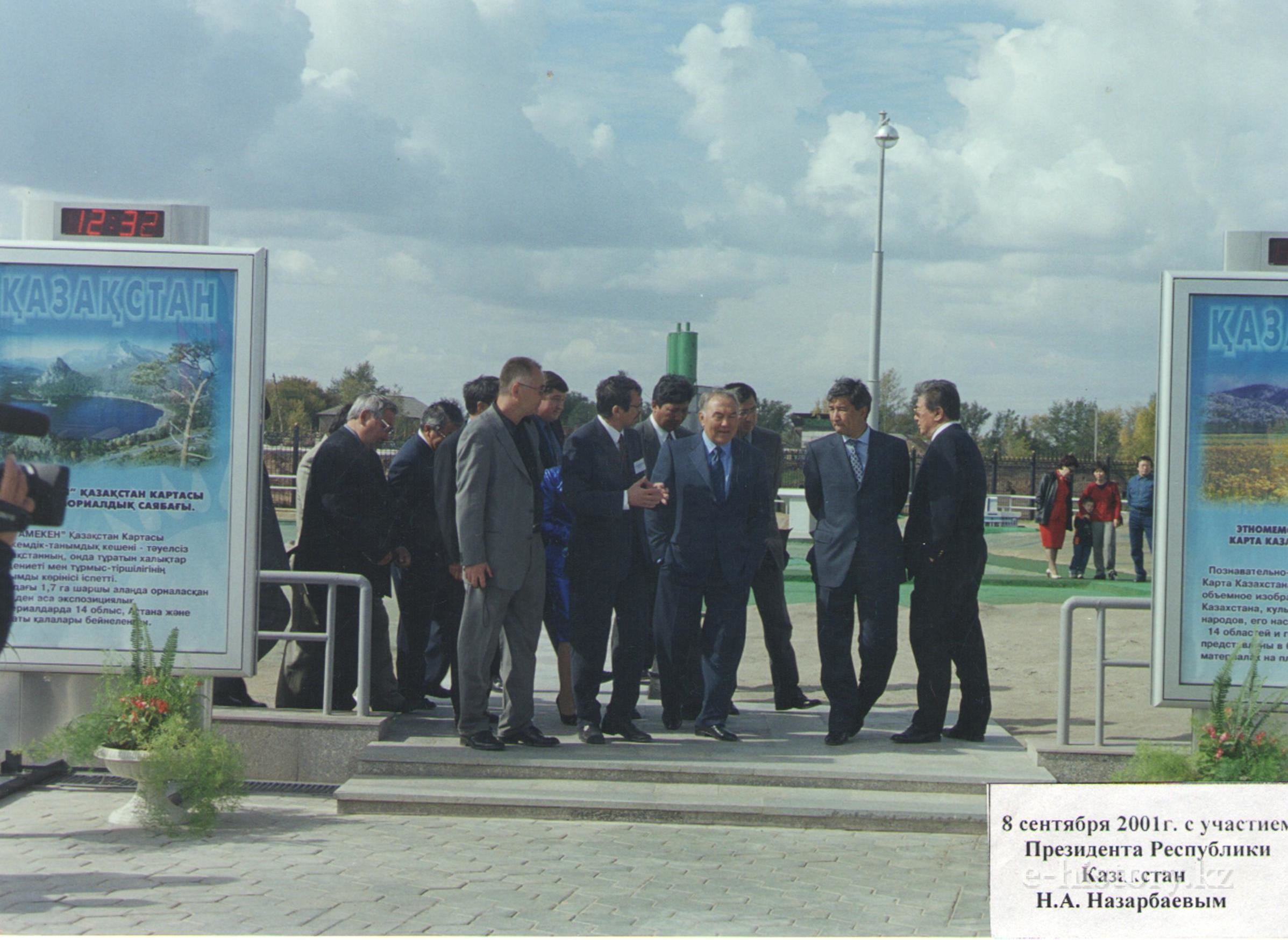 In 30 minutes by fast walking you can transfer from Western Kazakhstan to the East by fast walking on road and track of museum-map. Also, you will be able to see the magnificent left bank of Astana and in five minutes later be on the beautiful Kok-Tobe near Almaty. 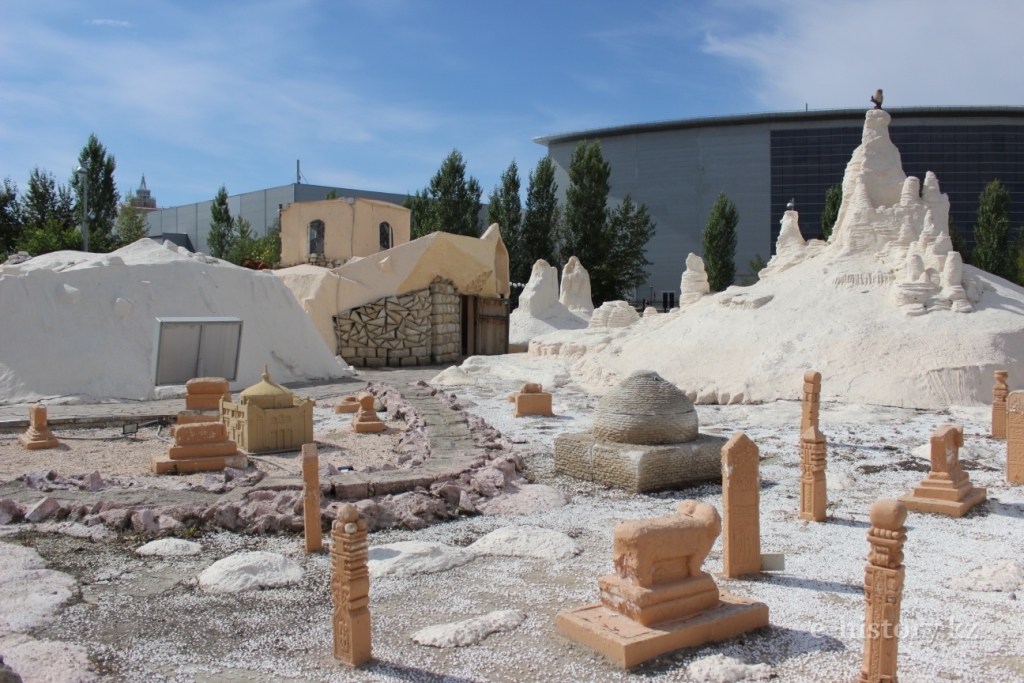 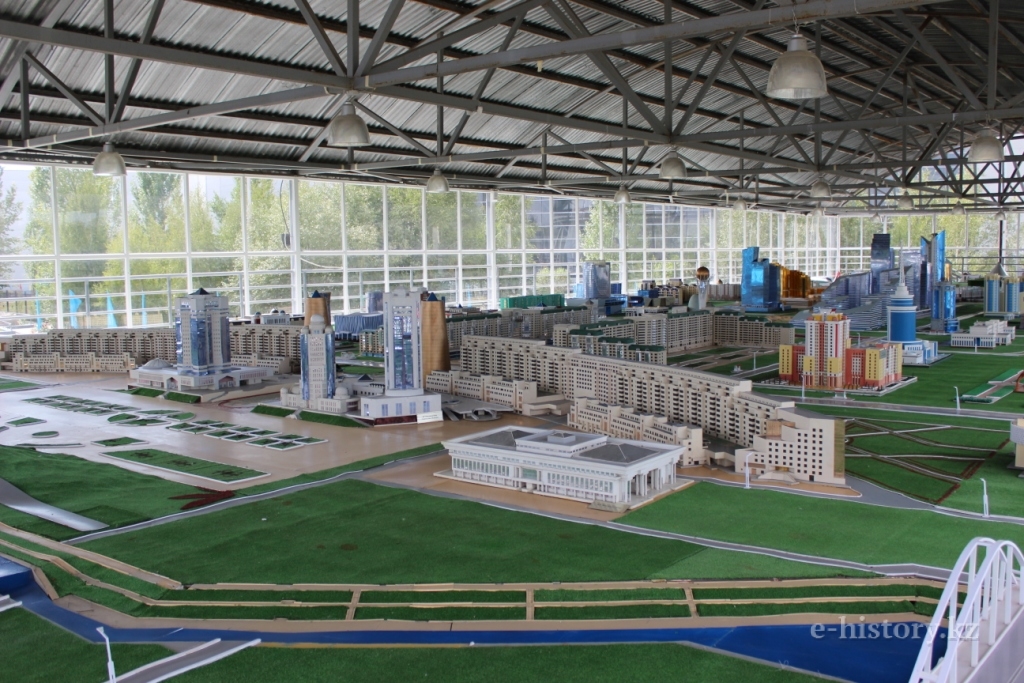 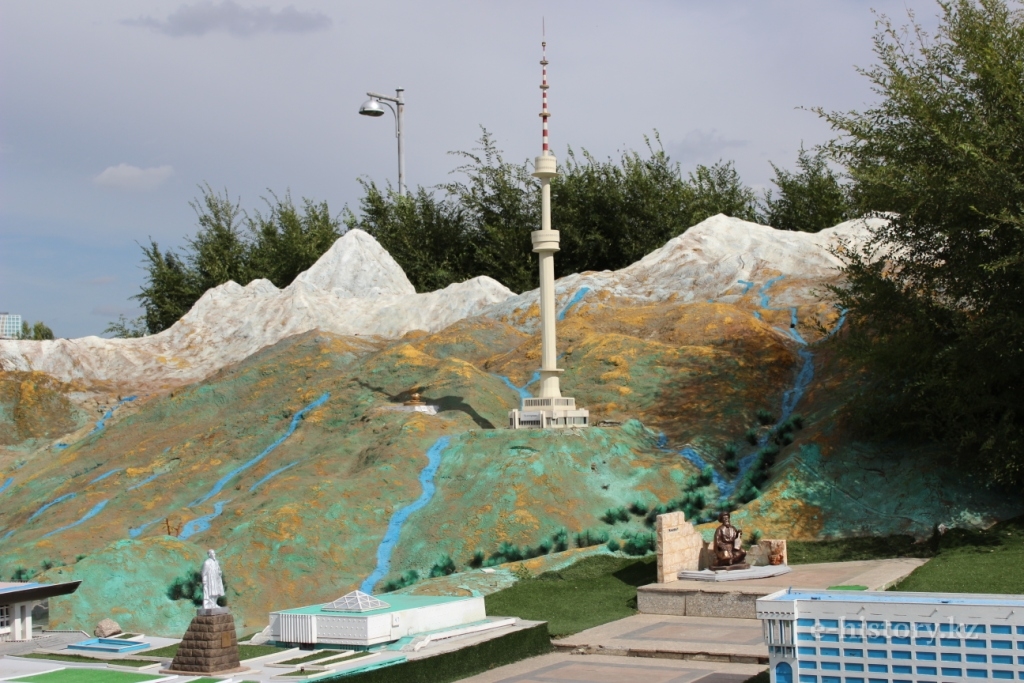 Mountains of Trans-Ili Alatau near Almaty

Such maps descended from the pages of the atlas are only three in the world. They are miniature of Italy, France and Austria. Map of Kazakhstan «Atameken» is the only in CIS. However, in general, there are 25 open-air museums and map of Kazakhstan is among top ten.

There is an opportunity to come close to the each layout and even touch it. All of them are made of the most advanced material for the manufacture of plaster casts, thus, exact copies of attractions of our country would not be destroyed by rain or frost. Craftsmen, painters and architects of the Academy of Arts named after Zhurgenev in Almaty and the Union of Artist of Astana have been working on the creation of the layouts.

President of Kazakhstan N. Nazarbayev periodically visit the museum. Not so long ago, he opened a pavilion dedicated to the history of the country «Kazakhstan. Milestones of the Millennium» and museum panorama «20 peaks of Independence». He visits the pavilion, which is a replica of the left bank of the capital. According to the director of ethno-memorial complex Alma Altybayeva, models of this panorama are updated together with the construction of the new city.

Ethno-memorial complex «Atameken» in addition to what is unique in the post-Soviet space, keeps up with the times, giving the tendency to all the museums of the country. According to the Deputy Director for Research Batyrkhan Zhumabayev, trainings and masters classes are hold monthly on the basis of the complex. Guides enhance their skills by listening lectures of honored figures of Culture, historians and the best tour guides of Kazakhstan. «The best tour guide» became a republican annual contest. 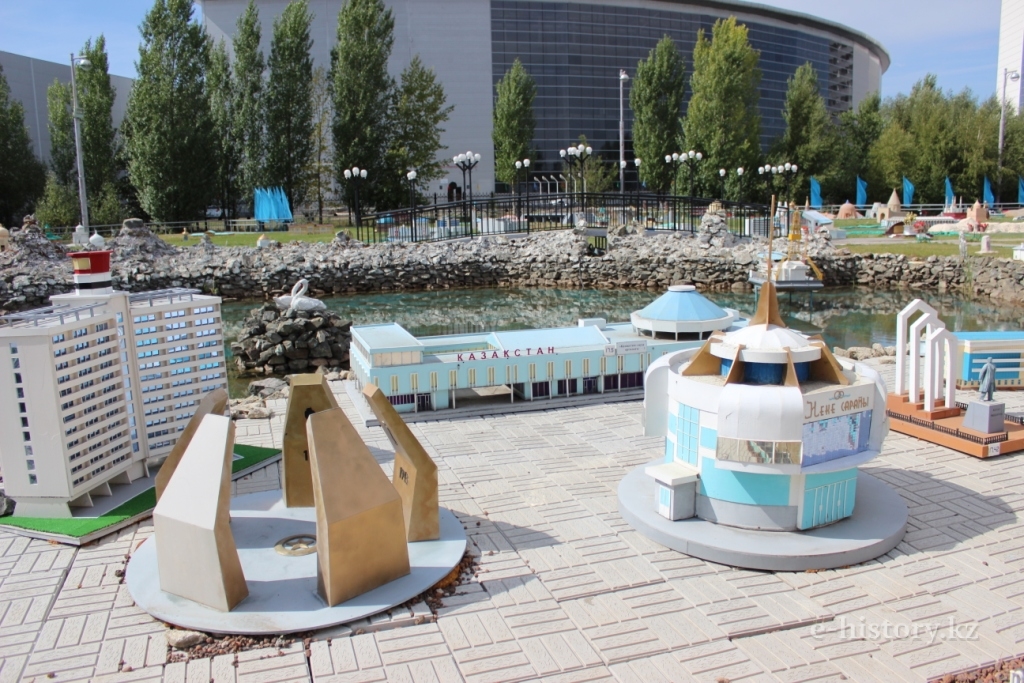 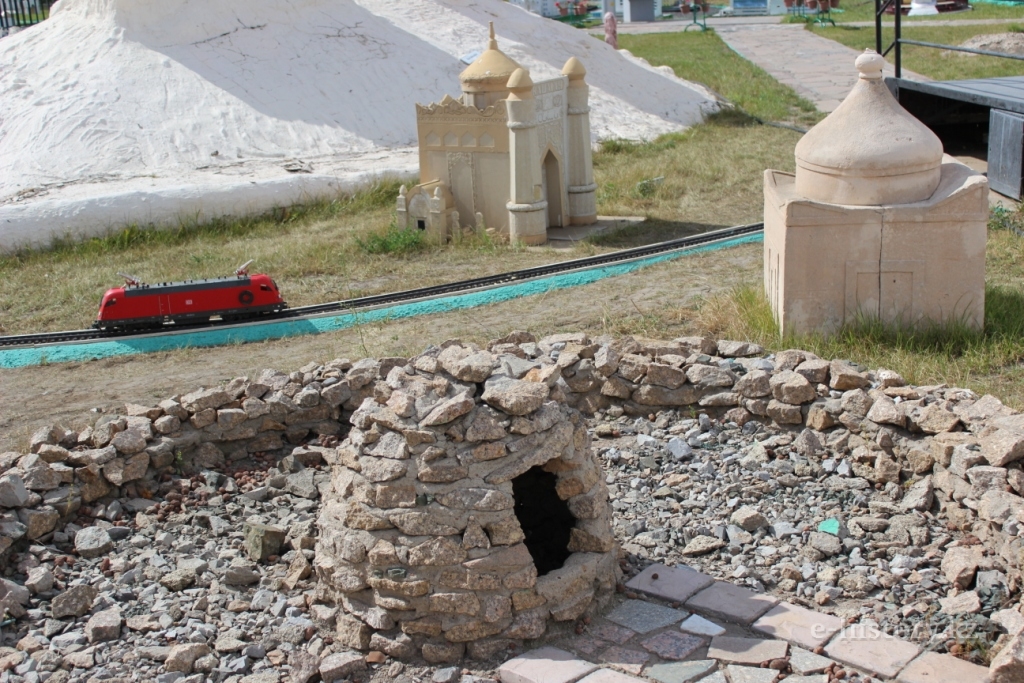 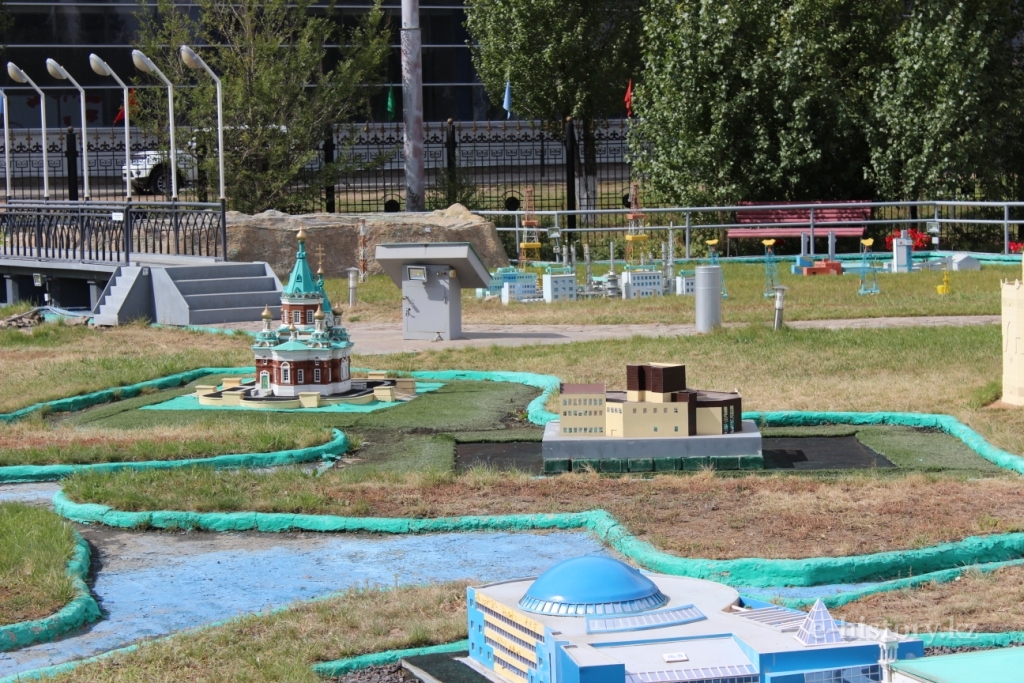 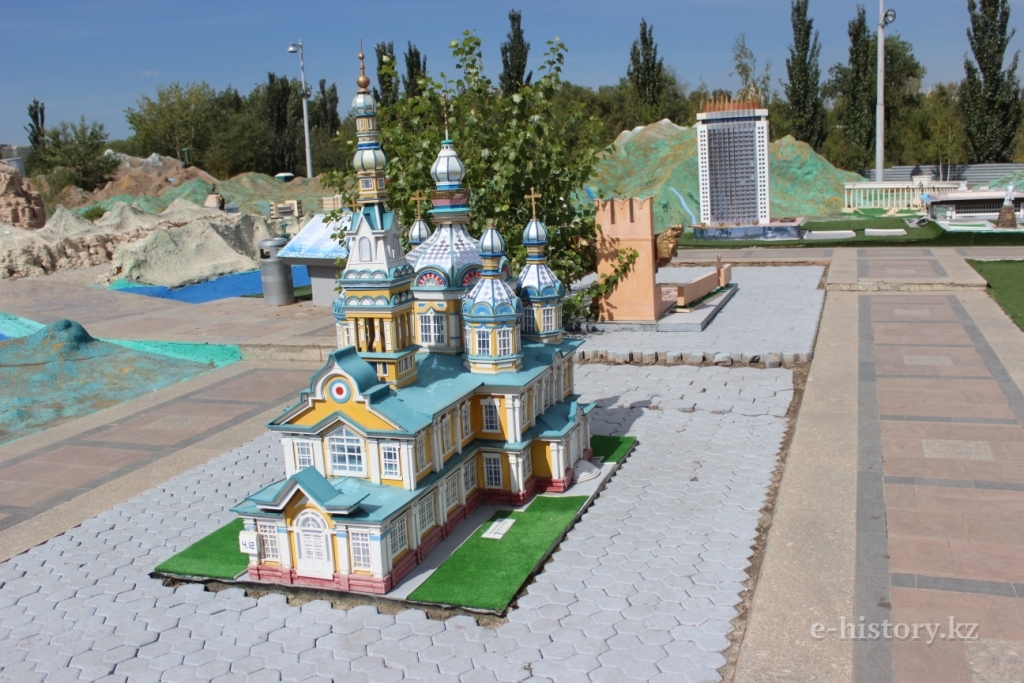 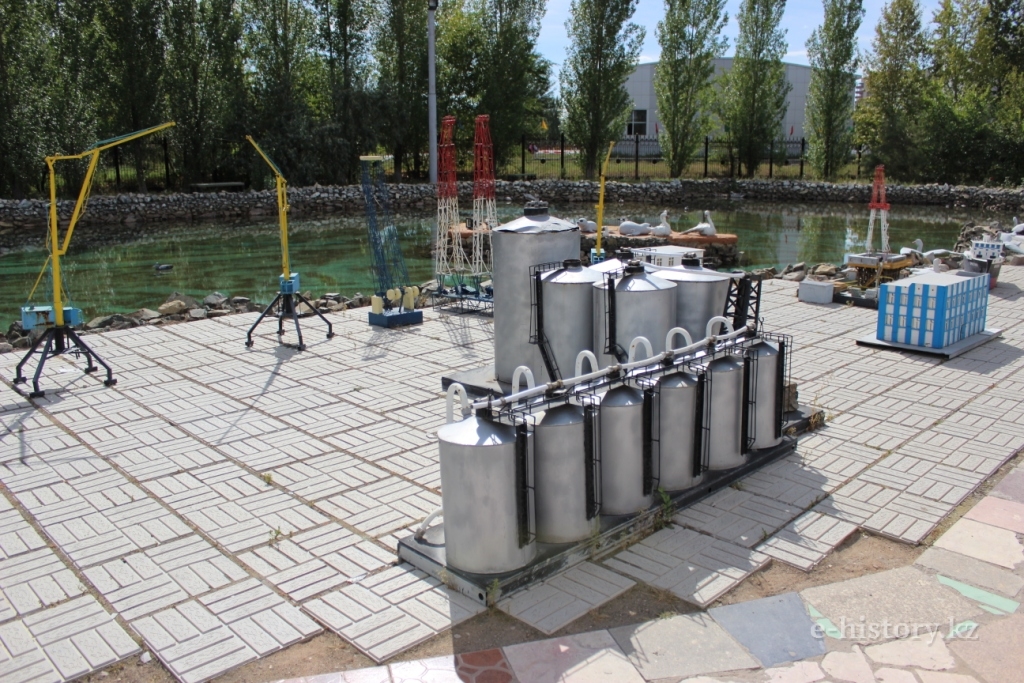 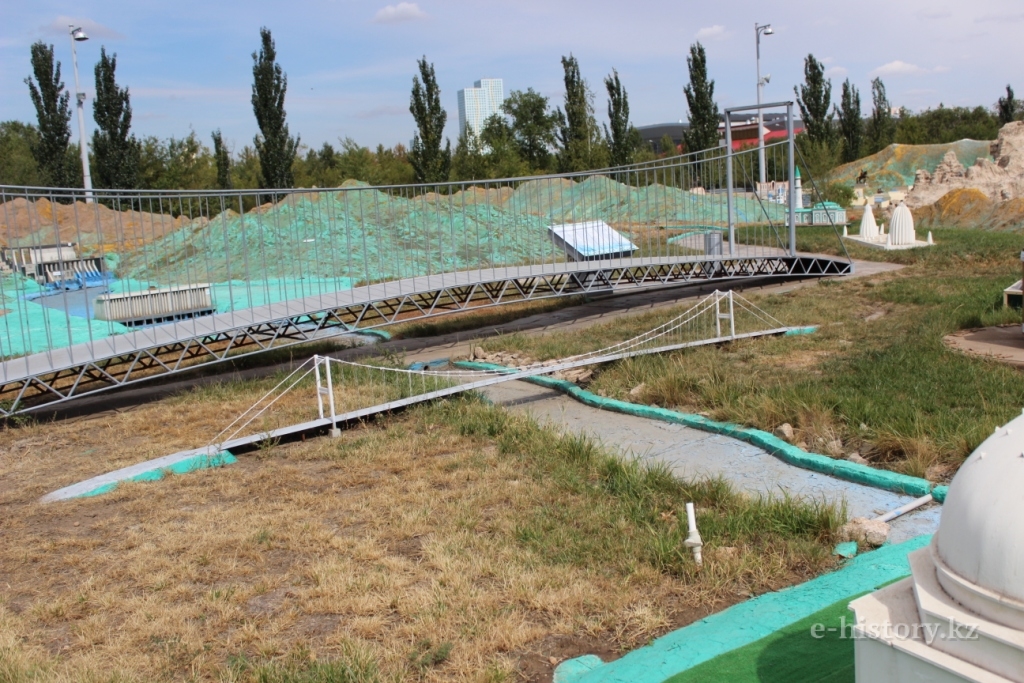 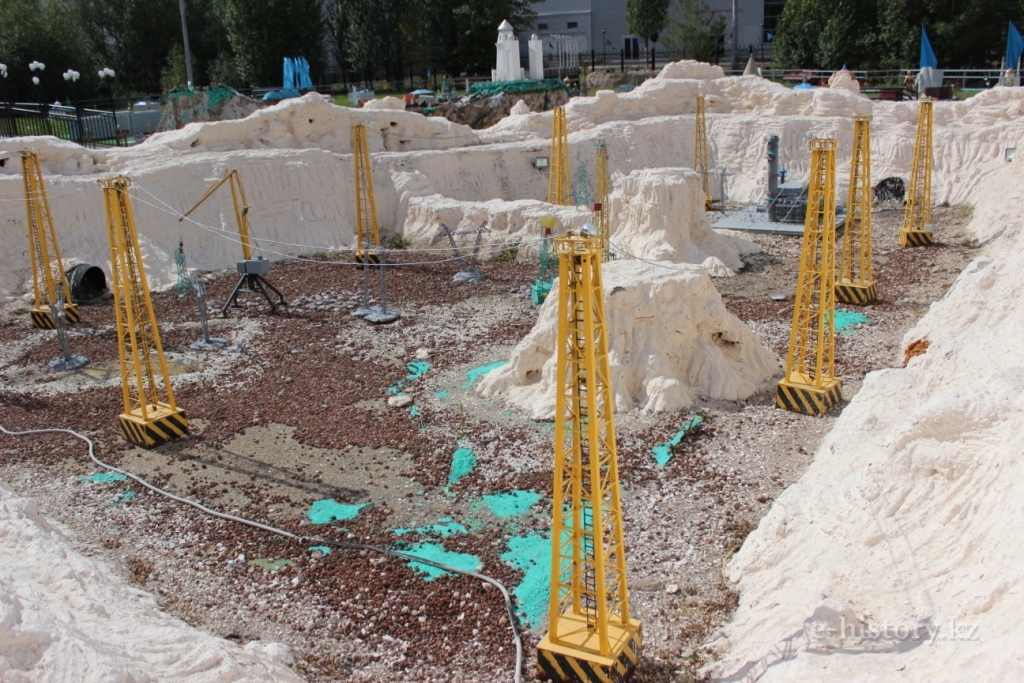 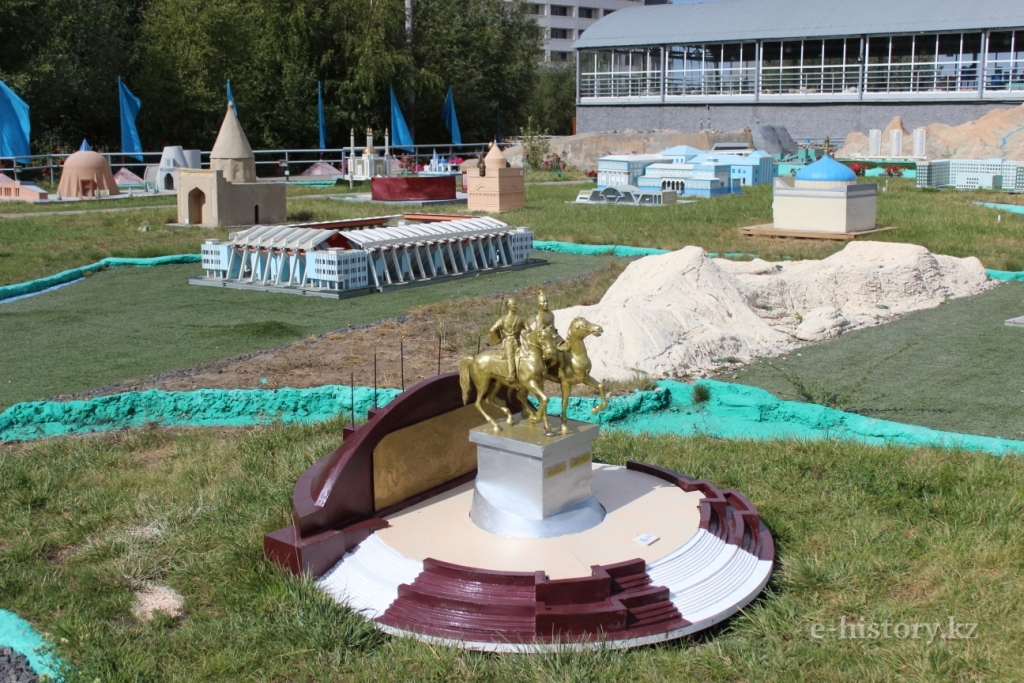 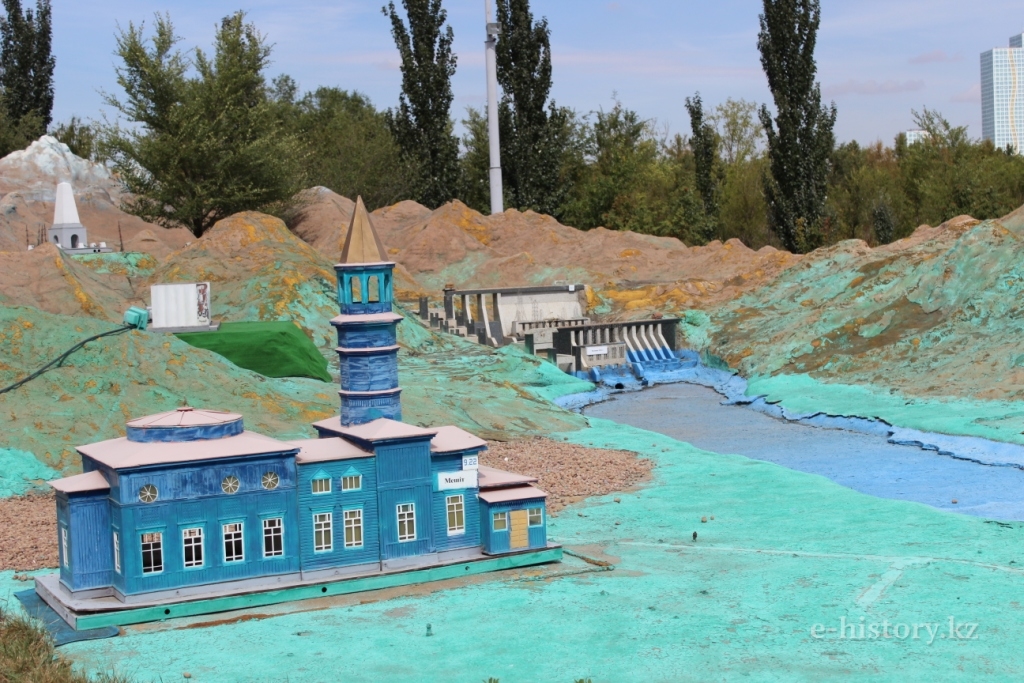 «Atameken» is the only museum in the country, where students can officially conduct tours. In 2007, for the first time the practice of the organization of first summer labor camp appeared on the basis of the ethno-memorial complex. It works very well since that time. The boys and girls have been working as a guide for four hours a day, received tips and monthly premium. «Pupils after this summer employment gain the highest scores in UNT on the history and geography of Kazakhstan», — says about the results of monitoring Batyrkhan Zhumabayev.

Today, more than 500 museum’s layouts, which tell about the history, culture, geography and economy of our country, are under the open sky. 15 thousand people visit «Atameken» every year. The museum is open to all visitors, from May to October. It works seven days a week from 9.00 to 21.00. 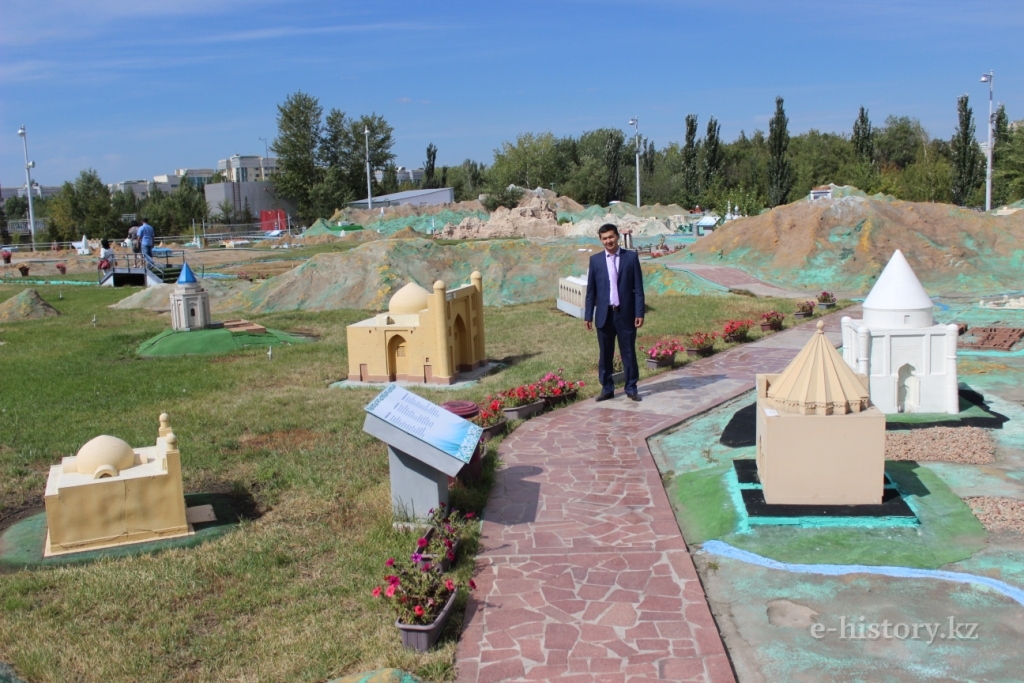 Reduced copies and exposure «100 Wonders of the World» quickly replenished the museum. Today, there are 27 of them in the museum. In the short-time, the ethno-memorial complex is planning to create two new exhibitions of the layouts for the celebration of EXPO-2017 in our country and the Assembly of People of Kazakhstan. 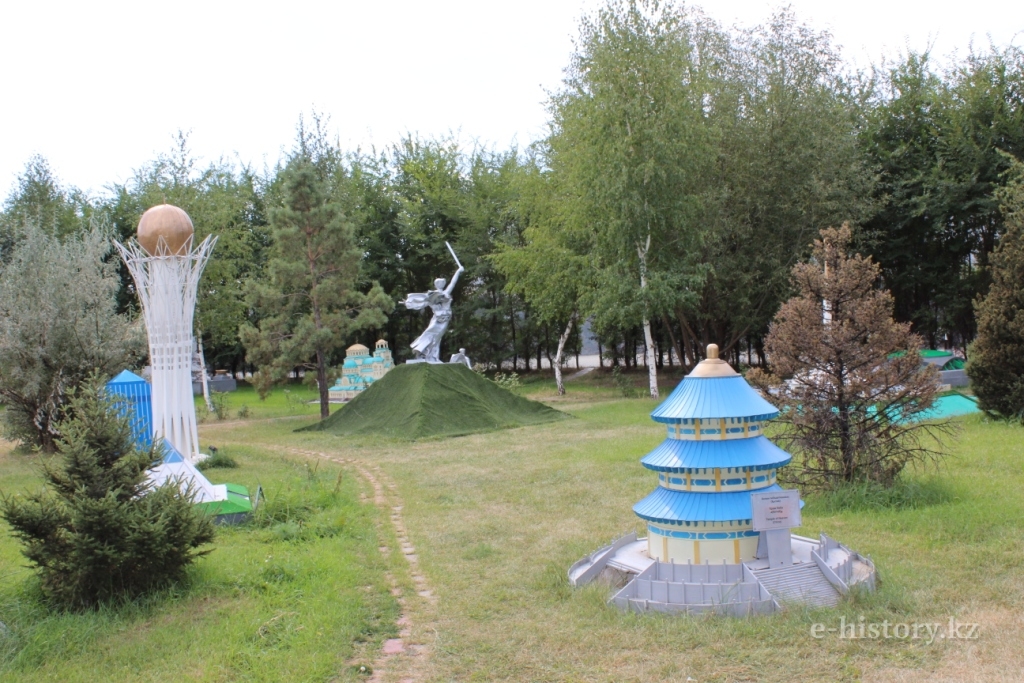 From left to right Bajterek, Motherland 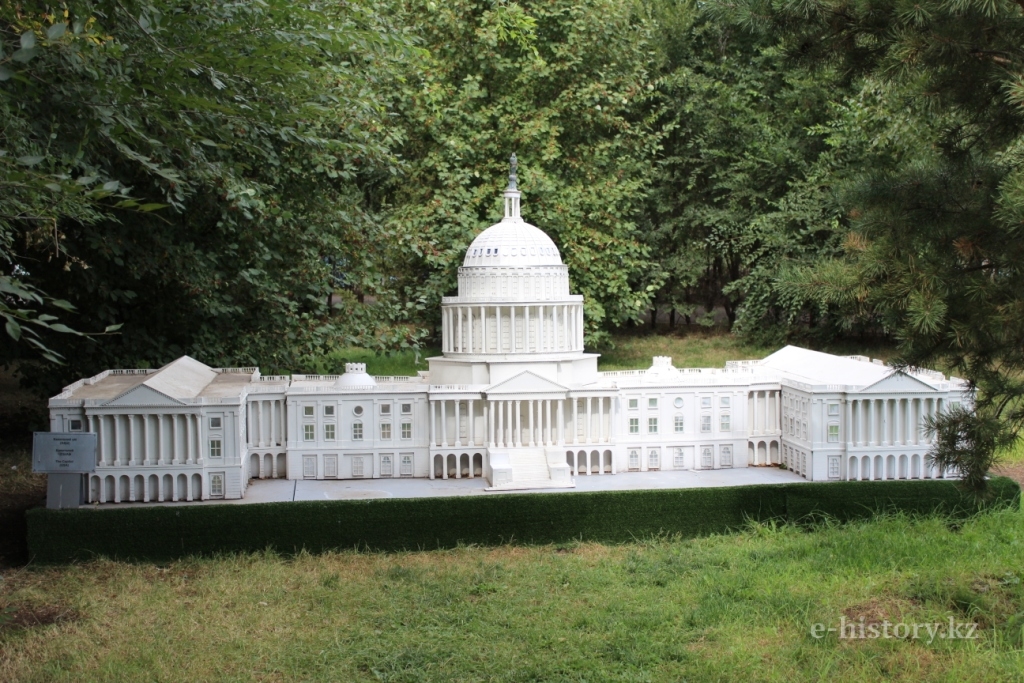 Use of materials for publication, commercial use, or distribution requires written or oral permission from the Board of Editors or the author. Hyperlink to Qazaqstan tarihy portal is necessary. All rights reserved by the Law RK “On author’s rights and related rights”. To request authorization email to mail@e-history.kz or call to 8 (7172) 57 60 13 (in - 1163)
Қазақша Русский English
MOST READ
Month Year
The referendum on the Constitution is a significant stage of democratization
Philosophy of the Emblem
The rural akims: the country's hope is in the elections
Kazakh historical drama Tomiris premiered in Istanbul
Stolypin about the worries and hopes of immigrants to the Kazakh steppes
ALASH IDEA IS THE PROTECTION OF KAZAKH STATEHOOD
A tireless explorer of the Kazakh land
SWITCHING TO THE LATIN ALPHABET – UNITE ALL KAZAKH PEOPLE
Kunaev Dinmukhamed Akhmedovich
People who eat horses will kill you
Kazakhstan's participation in the Winter Olympics has a long history
Rebooting a field of science and education
Recorded history of Kazakhstan. Part 1
Materials on theme
Family relations: after wedding
History of inauguration of the President of Kazakhstan
Return of “forgotten heroes”
100 unique sites: the Kenty-Baba Necropolis