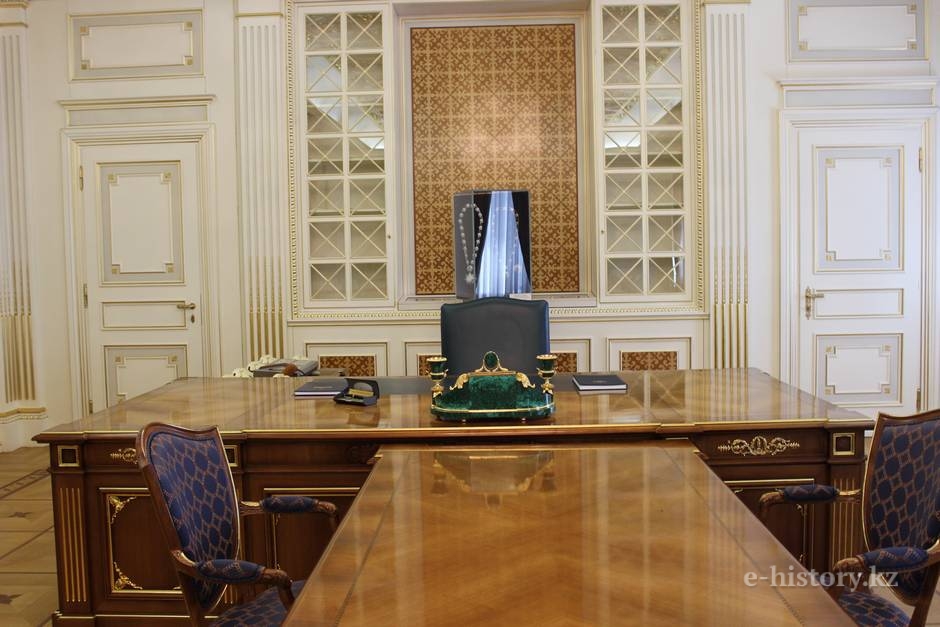 Before the Day of the Capital we have visited the first residence of the President of the RK, where the working atmosphere and pristine interior are still the same.
It is not a secret that N. A. Nazarbayev’s decision on the requirement to move the capital, proclaimed on July 6, 1994, the reaction of the government and society was skeptical. The reasons were the following: the country was literally in the dark, experiencing power cut in all cities and villages, factories reduced their production rapidly, many of them were closed and people did not get salary and pension for months. It was difficult for Kazakhstan to recover after the Soviet Union’s collapse.

Under such conditions the President was the only person who was sure that the decision was right. He went toward his idea overcoming general doubt and resistance. As time shows, the President was not mistaken: transfer of the capital was defined by both political and economic reasons.

Until the final moment, nobody believed that the capital would be transferred from Almaty to Akmola. Indeed, from time to time N. A. Nazarbayev signed relevant decrees and orders and created a special governmental commission on relocation of official agencies to Akmola. However, with the completion of the construction of Presidential residence in Akmola in 1997 and moving of state symbols to the city it became clear that the transfer of the capital had happened.

During seven years, from 1997 to 2004, intensive work on the crisis overcoming, search for new ways of development and transformation of the new center of Kazakhstan was conducting.

The well-known in the country Museum of the First President of the RK has been working here in the building of the former residence of the Head of the State for ten years after Nazarbayev’s moving to the residence symbolically situated in the center of the modern city. 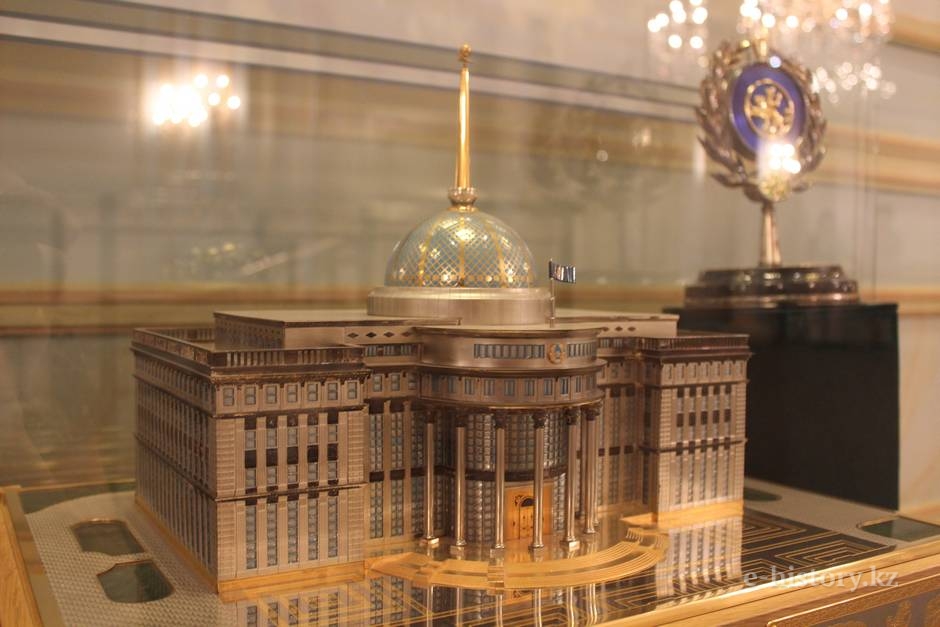 New Residence of the President

«Today the President’s residence is opened and everyone could visit and see the President’s office, halls where meetings and conferences at the high level were held, awards, presents and many other things. Nothing has been changed: working atmosphere and interior — everything has stayed the same», — Assel Shotkina, the Head of the Center of organization of the museum excursion service, tells proudly. Indeed, walking at the museum everyone could experience the feeling that the President is about to go out from his office.

The total area of the residence is more than twelve thousand square meters. The building was designed by Kazakhstan’s leading architects. It is must be said that they have done their best: well thought-out planning, skilful design and interior. Despite the fact that the residence turned into a museum, it still operates. Once or twice a year the Head of the State conducts meetings and conferences here.

During its workdays the residence had the President’s office on the third floor, his administration’s rooms — on the second, and the domed hall for special meetings and receptions — on the fourth. At the place where today the state symbols are located guard of honor stayed and welcomed the President every time he climbed into his office. 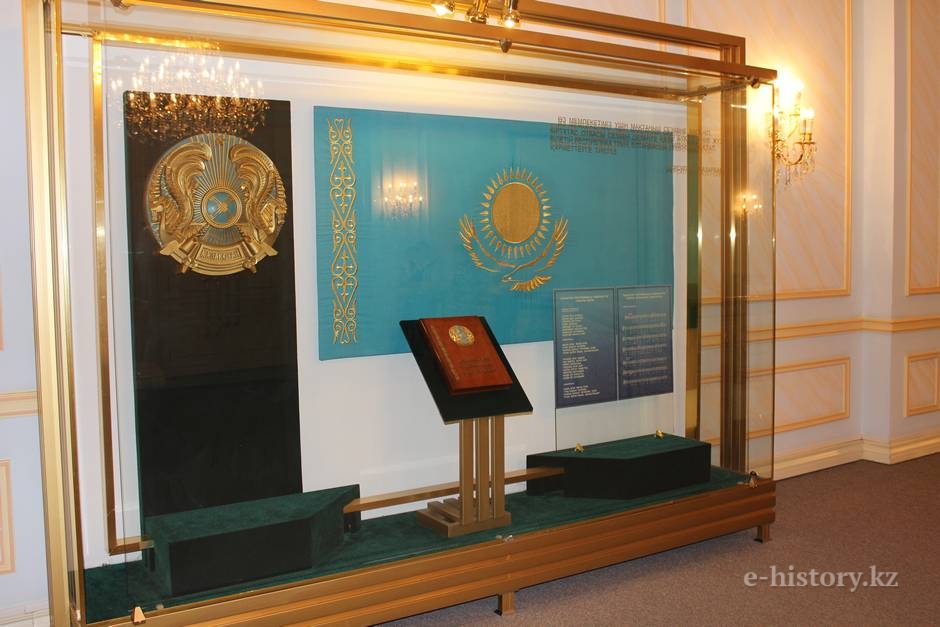 «Are there any other same residences-museums in the world?», — we asked our interlocutress Assel. «The Residence of Belarus President A. G. Lukashenko is functioning but could be visited after all official procedure. However, in a larger context, there are no analogues in the world, so we have something to be proud of», — A. Shotkina, the Head of the Center of excursions, concluded.

To come into the waiting room of the President it is necessary to pass through the exposition «Atameken», which give the information about N. A. Nazarbayev’s hometown, family and school years. «One who knows his seven ancestors will take care of seven generations», — is famous Kazakh proverb. The President is from Shaprashty clan which gave birth to Karasay and Bolek batyrs. 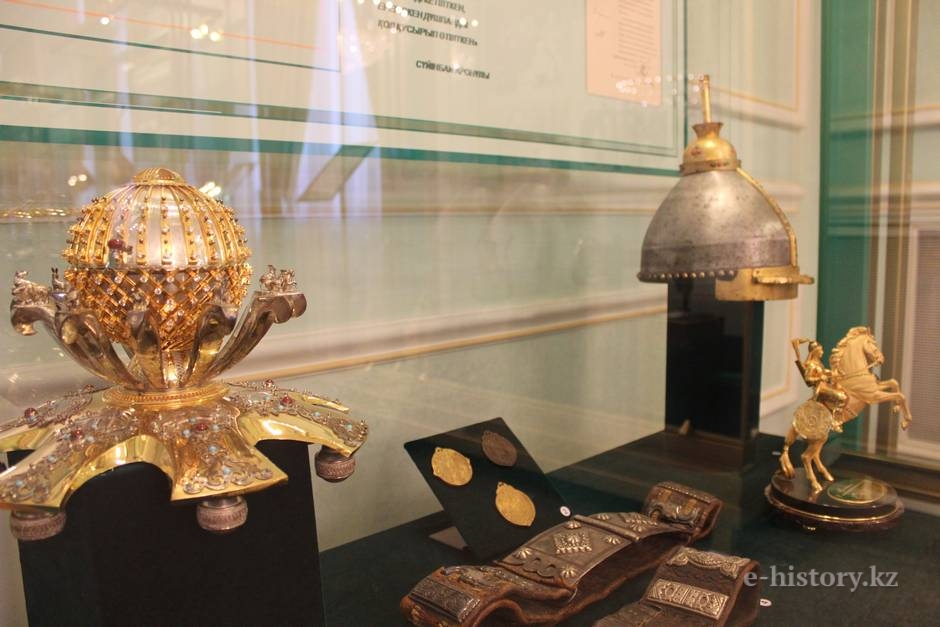 N. A. Nazarbayev was born on July 6, 1940 in Almaty region in the family of workers Abish and Alzhan. Nursultan was the oldest son of the four children in the family which was very harmonious and hard-working. 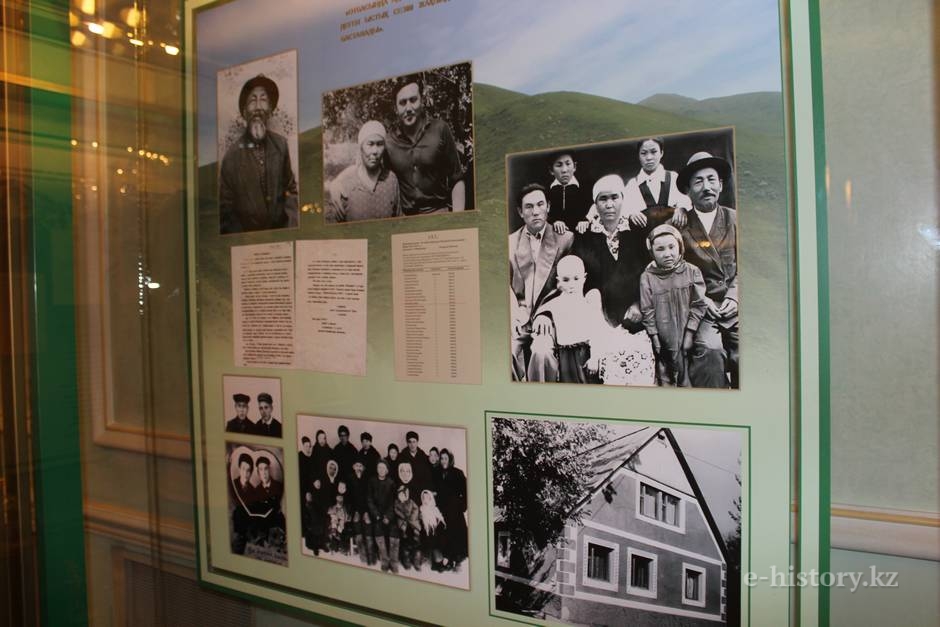 Despite the difficult 1950-s young Nursultan was one of the best pupils. His first teacher was Takura Ismailova. 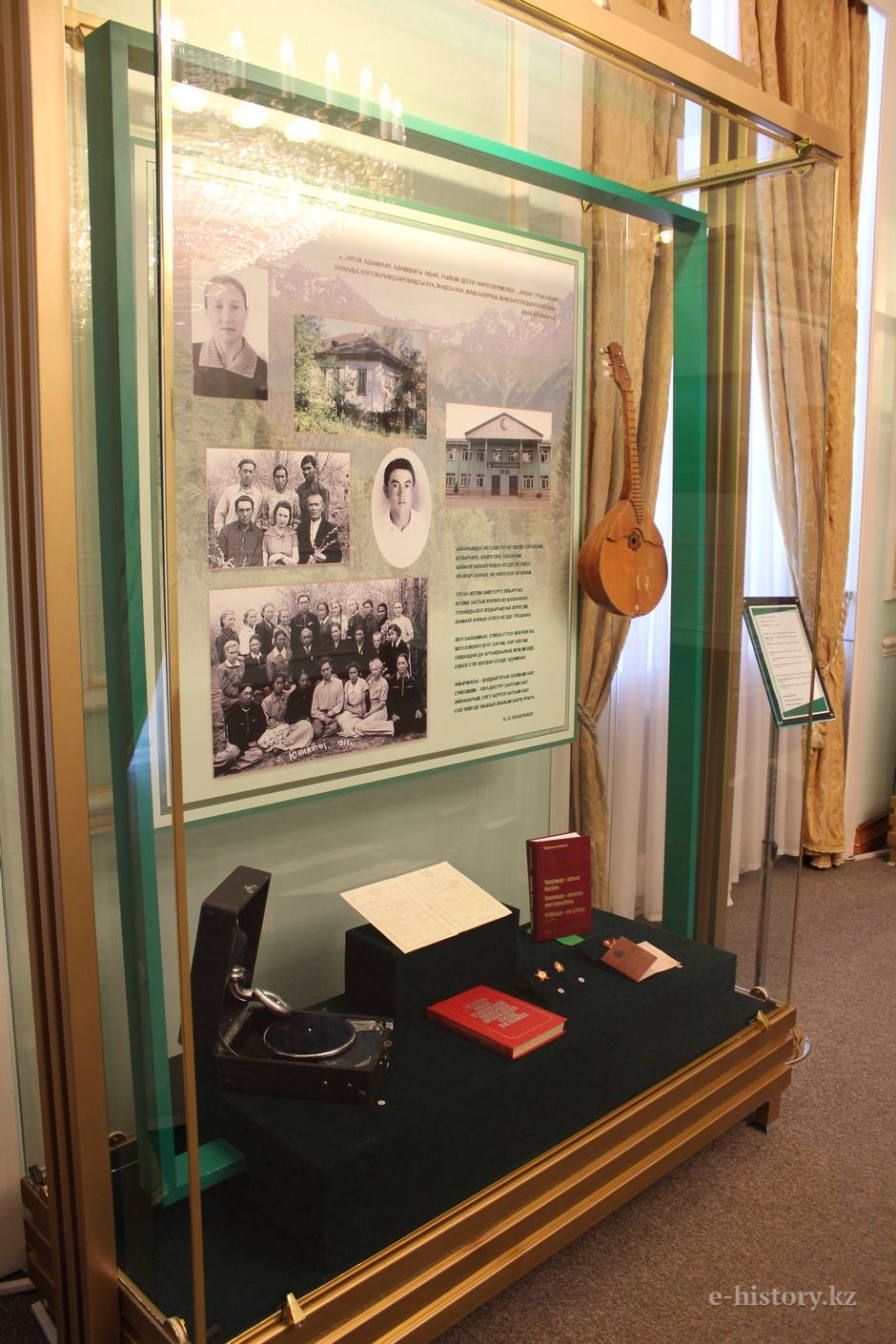 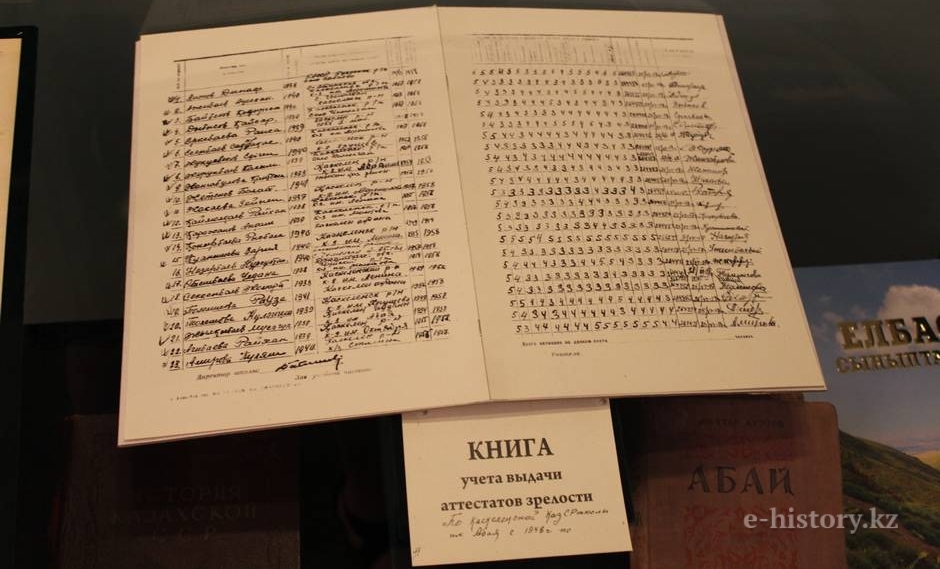 This is a record book for certificates of secondary school where Nursultan Nazarbayev is the sixteenth. 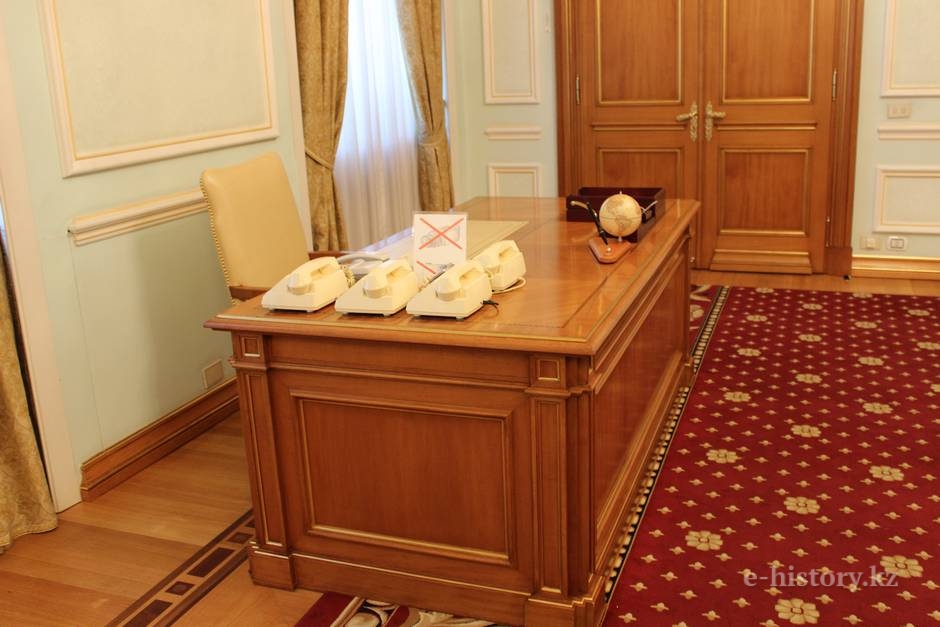 Just after graduation from school Nursultan went to study at the other end of the vast Soviet country, Dneprodzerzhinsk. Arrived to Dneprovsk Metallurgic Plant he was appointed to be a blast-furnace operator where he worked and studied at the same time. Once in informal talk senior foreman said to his learner: «Nursultan, you will be the Chairman of the Council of Ministers». He must have been looking in a crystal ball. In 1984 Nazarbayev indeed was elected to the post of the Chairman of the Council of Ministers of the Kazakh SSR. 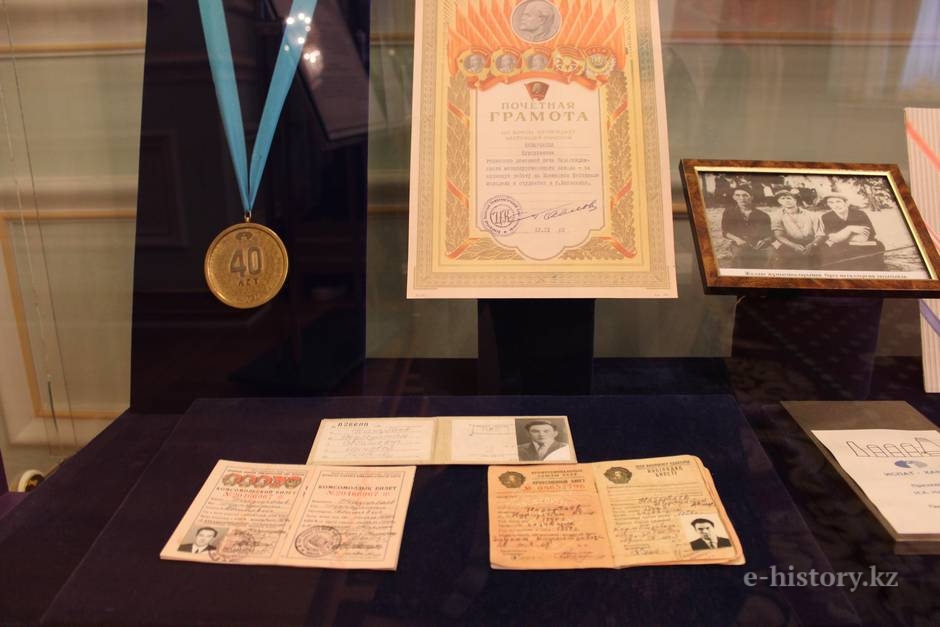 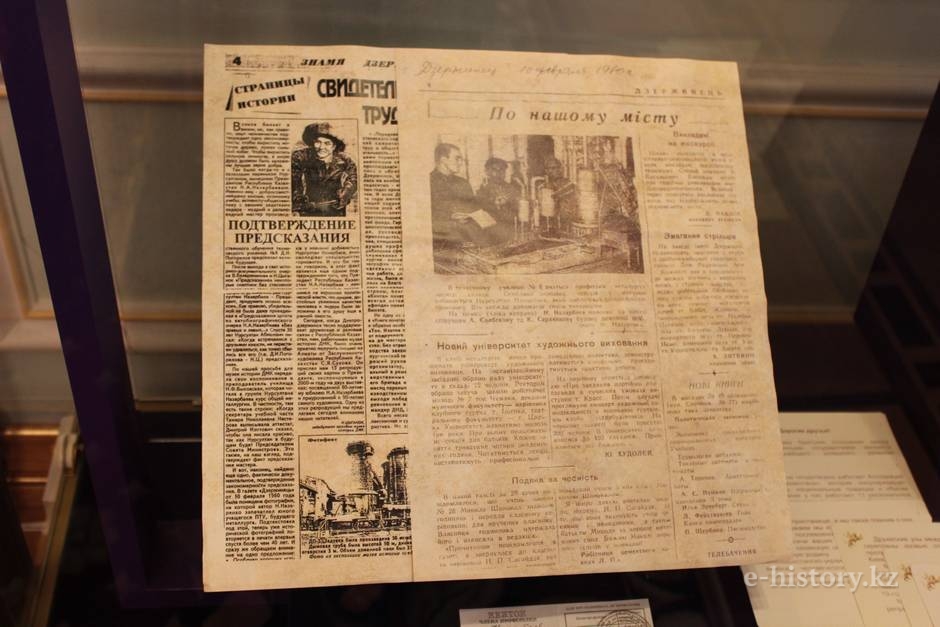 This article appeared at the newspaper just after N. A. Nazarbayev headed the Council of Ministers of the Kazakh SSR

On July 3, 1960 the first Kazakhstan’s cast iron was produced in Temirtau. Kazakhstan’s Magnitka became one of the largest metallurgic centers in the Central Asia. The biography of the President could not be separated from the biography of Temirtau. «I would not become the President without Temirtau. Nine years of work at the blast furnace have made our character strong like steel», — Nursultal Abishevich said later.

These certificates tell about the positions of Nursultan Nazarbayev. All of them are certain base of the Presidents career. 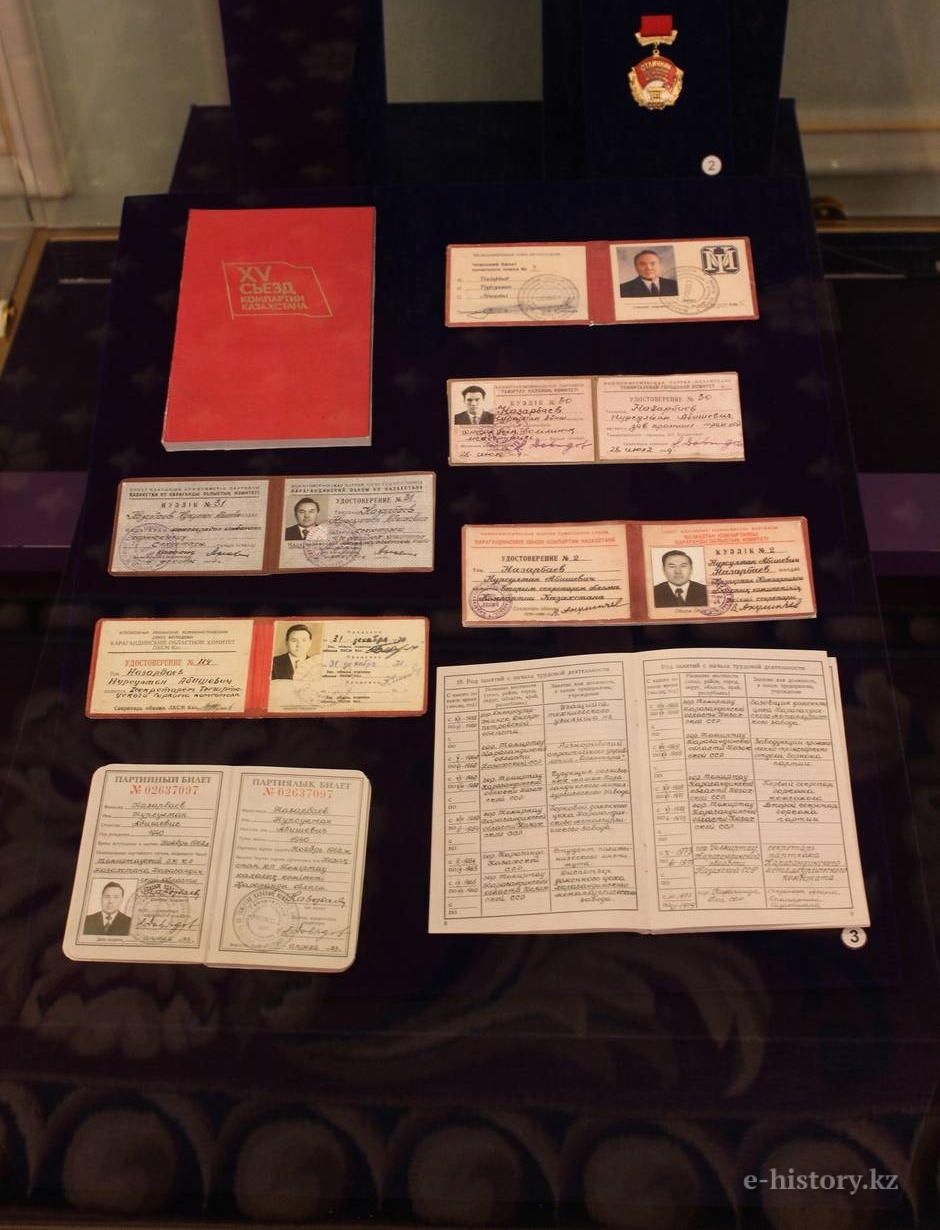 The meaningful meeting with Yu. A. Gagarin. It is known that Nursultan Abishevich approached Yuri Alekseevich and said «You flew up exactly from Kazakh land, so you need to take photo of you with Kazakhstan’s delegation». 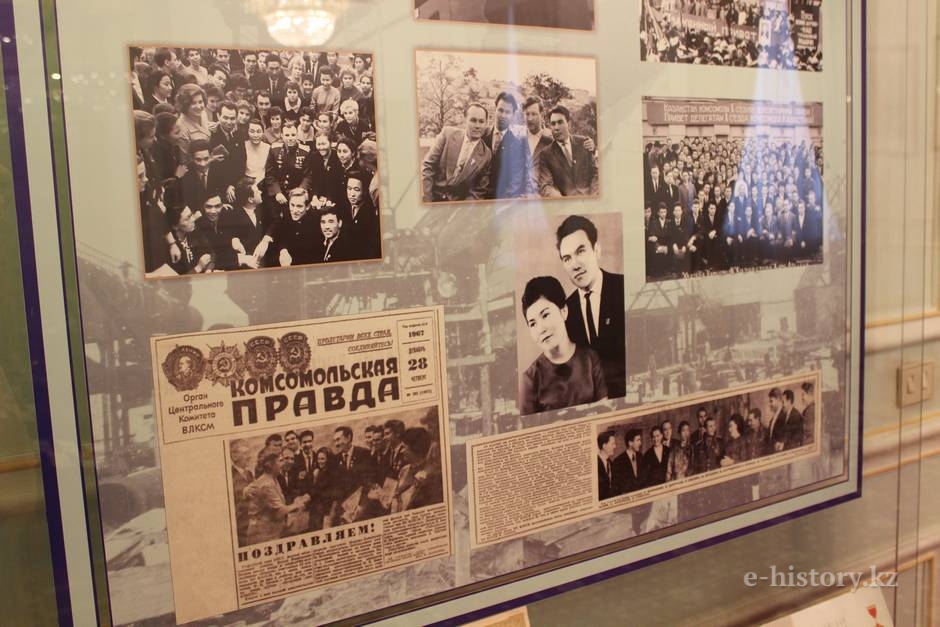 Photo with Yuri Gagarin in the upper left corner

Having learnt the biography of the Head of the State, at last, we arrived to his workroom. Seven years of hard work passed here where within a narrow circle meetings were held, treaties were signed and crucial decisions were made. 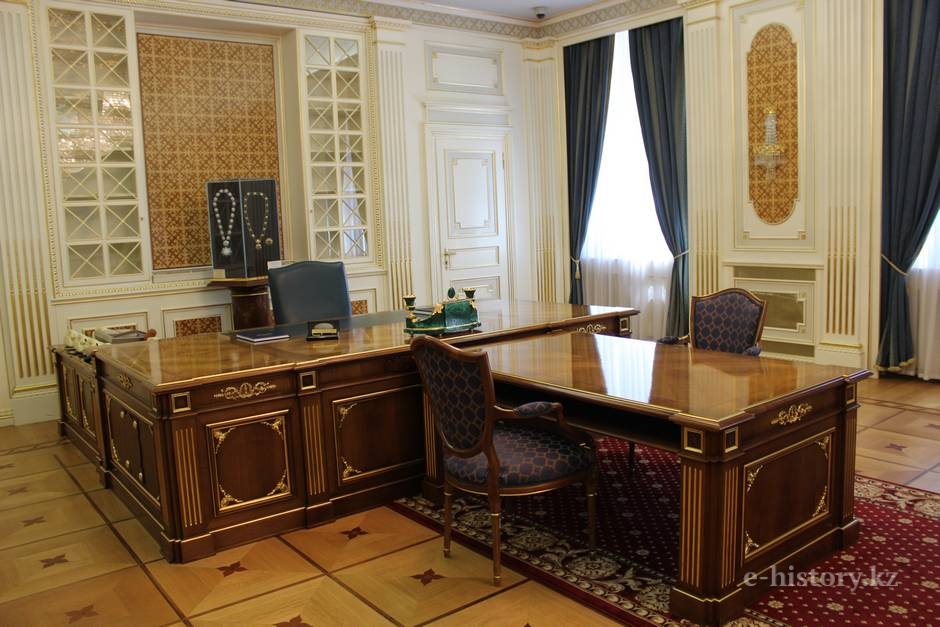 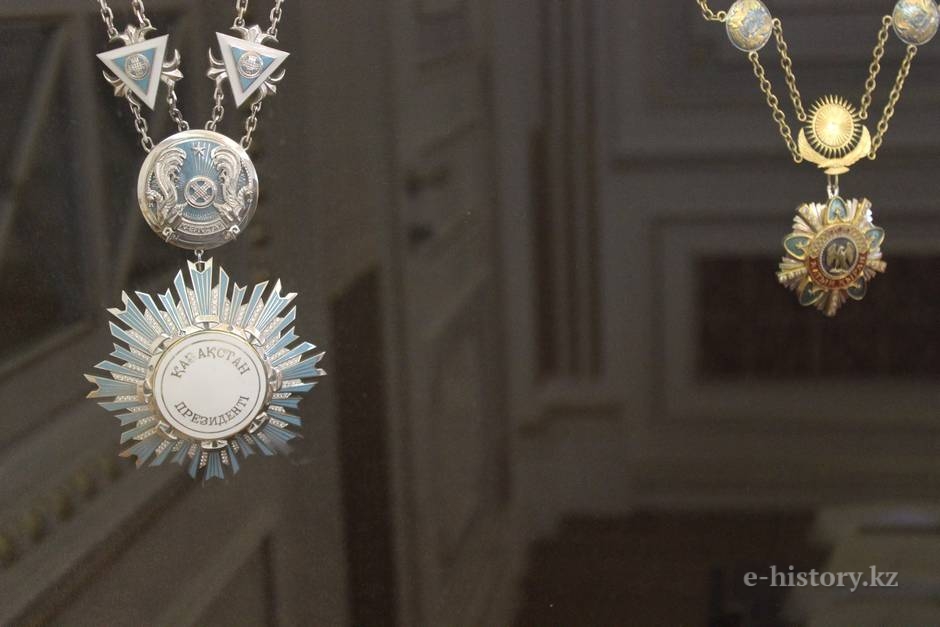 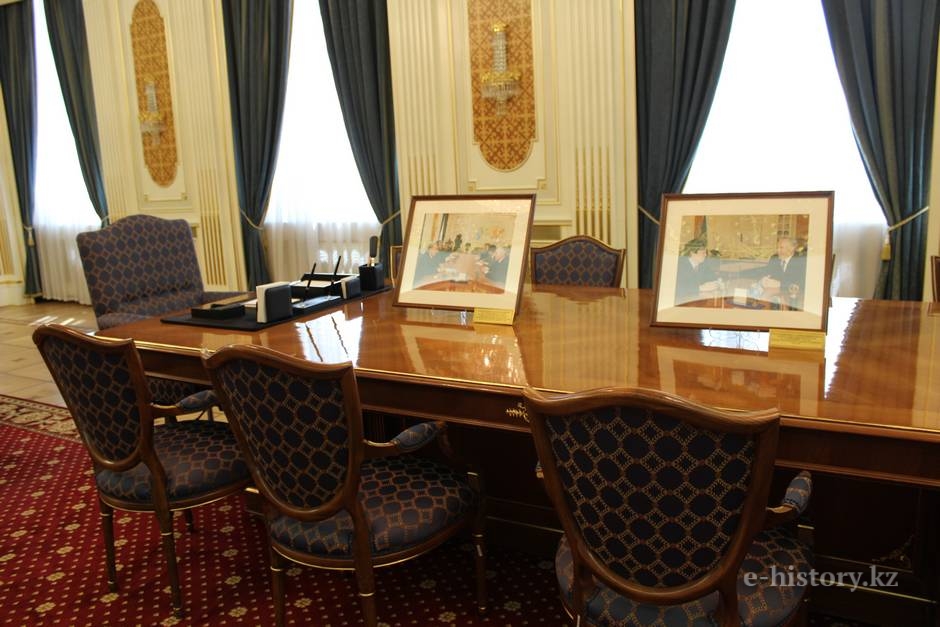 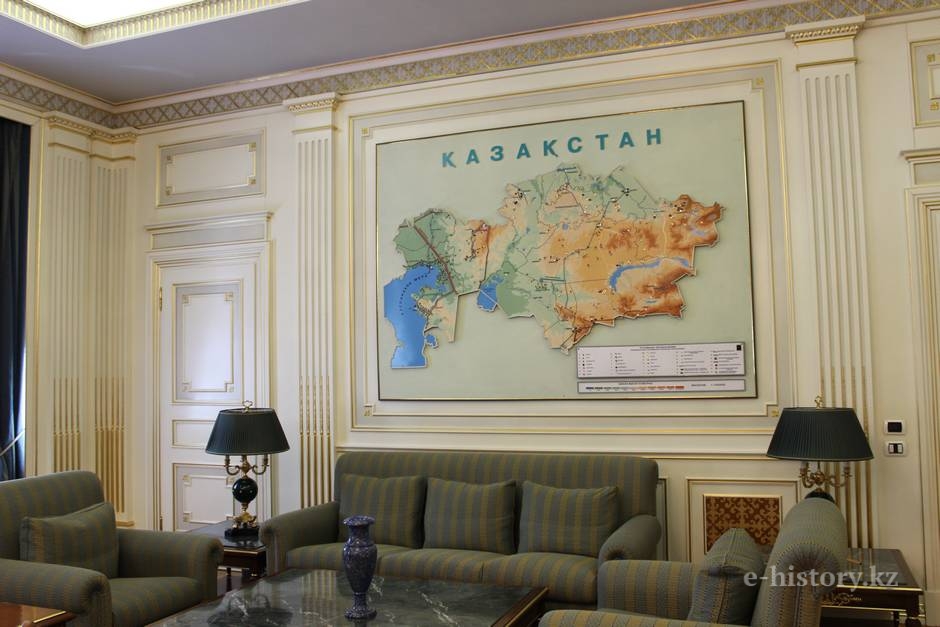 After that, we visited two symbolic halls of the former residence of the President, museum at the present, — the Silver and the Dome halls. Special flavor prevails in these rooms. In the Silver Hall during official visits documents were signed and solemn ceremonies were held; ranks and awards were also given here. Today this hall hosts the exhibition " President’s awards — gratitude to the nation». Visitors could see the awards from more than 30 countries, which were presented to all people in Kazakhstan. 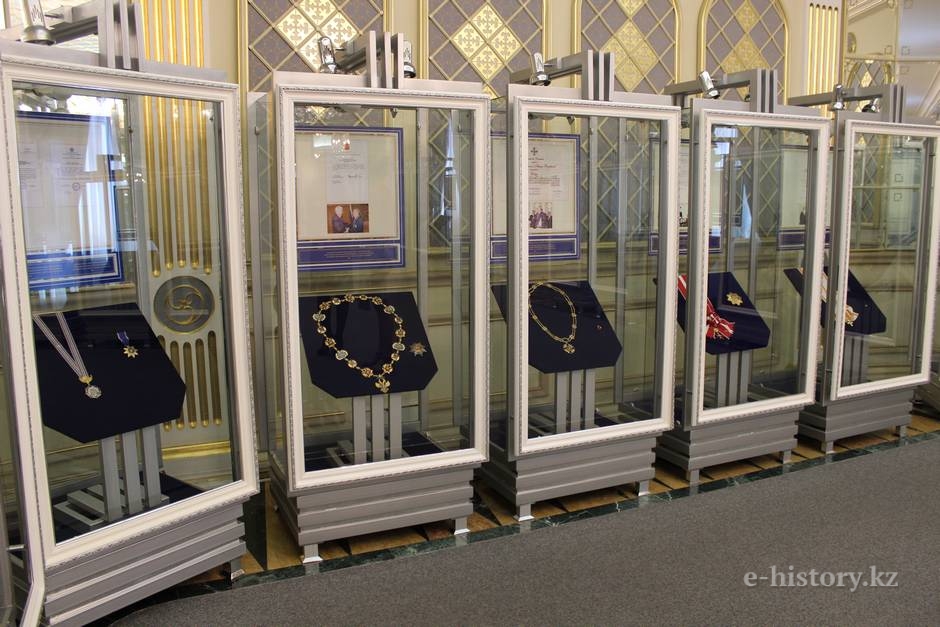 Establishing of friendly relations with world countries, contribution to nuclear security, tolerance of Kazakhstan’s people and so on — all these were appreciated at the high level. Awards from European, Muslim and Asian countries are exhibited in the hall.

For example, the Italian order «Knight Grand Cross», the Order of St. Andrew the Apostle, established by Peter I (after the reestablishment in 1998 it was given only to three persons, including academician D. Likhachev, engineer M. Kazalshnikov and N. Nazarbayev). For the contribution to the world nuclear security the President was awarded the Grand Cross of the Order of St Michael and St George. 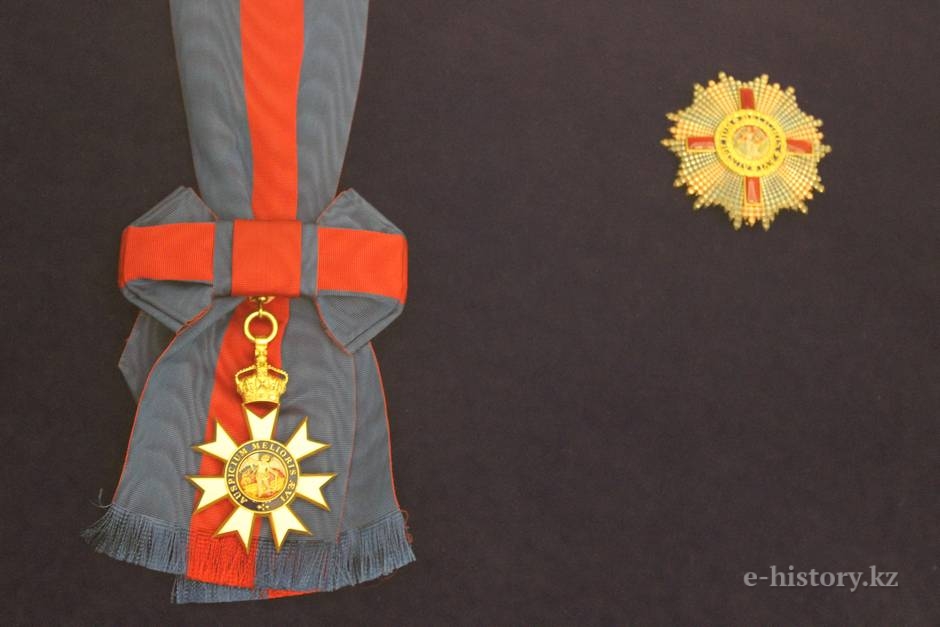 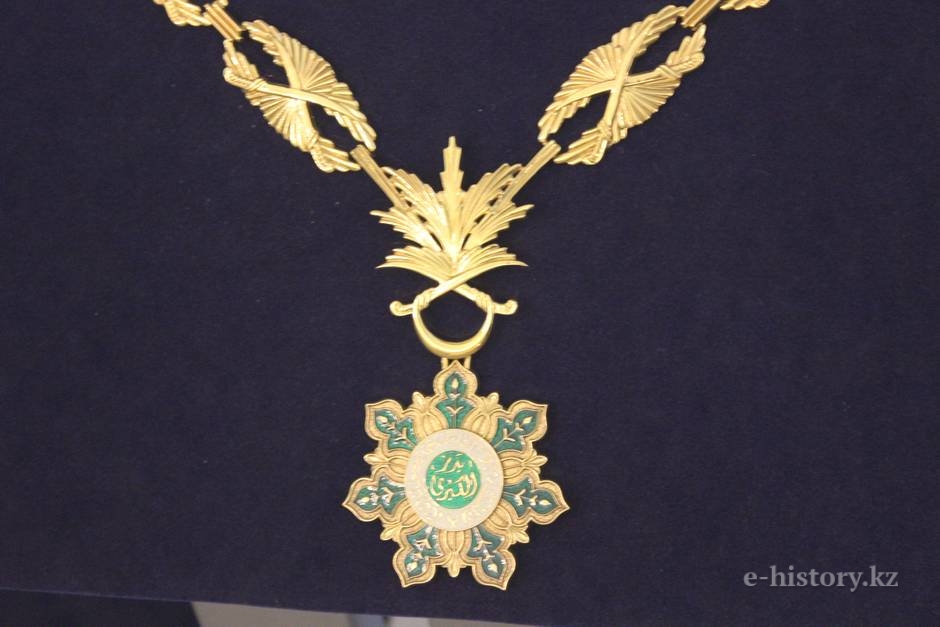 By the way, Kazakhstan is only CIS state which has the Order of the Kingdom of Saudi Arabia.

The Dome hall is the largest room in the residence. Made by architects dome, a kind of shanyrak, symbol of our common home, is a decoration of the hall. It is the place where 16 years ago the President announced our capital: «From now and forever here, in the very center of the vast country, decisions, crucial for the nation, will be made. The heart of our homeland is beating here from this moment. Kazakhstan will determine its historical destiny in anticipation of the third millennium from this place». Until now this room hosts meetings with the President. 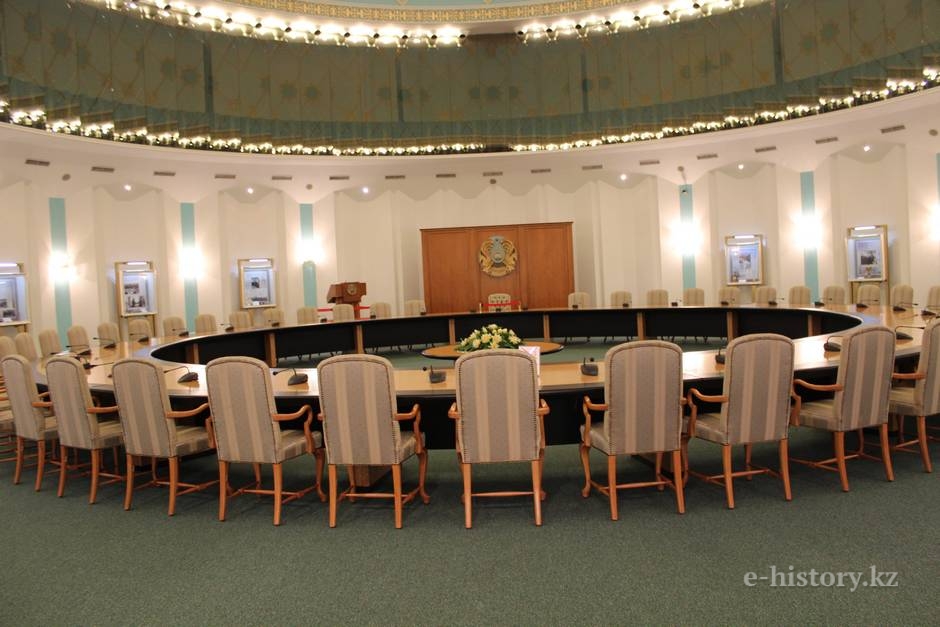 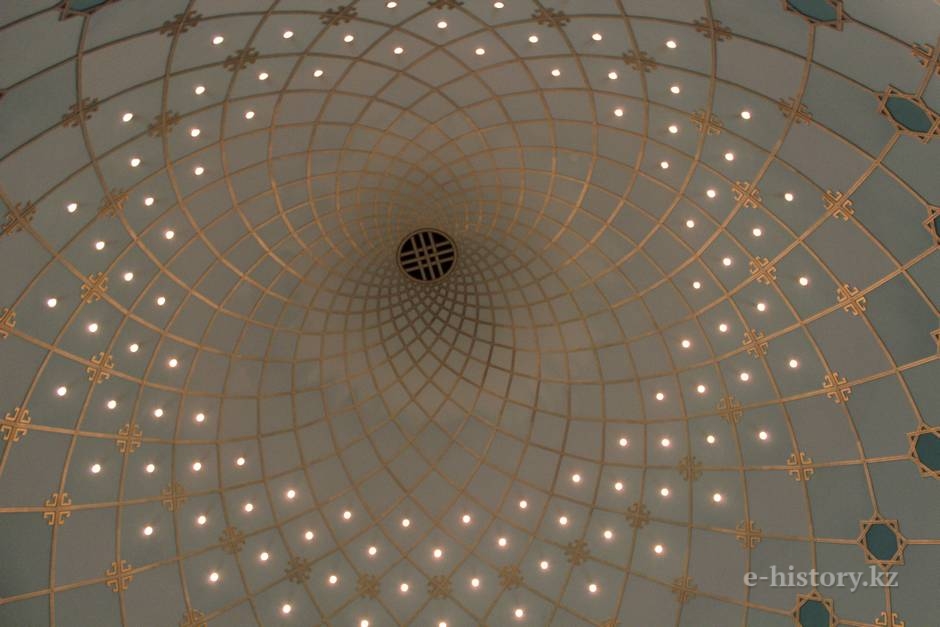 Kazakhstan’s people have unique opportunity to visit the first residence of the President of Kazakhstan N. A. Nazarbayev, feel the working atmosphere of his office and see awards and presents to the President and all Kazakhstan’s nation as well as personal collection of weapons of Nursultan Abishevich and many other things. At the same time, one can be imbued with a proud as it is a unique Presidential residence-museum in the world.

Use of materials for publication, commercial use, or distribution requires written or oral permission from the Board of Editors or the author. Hyperlink to Qazaqstan tarihy portal is necessary. All rights reserved by the Law RK “On author’s rights and related rights”. To request authorization email to mail@e-history.kz or call to 8 (7172) 57 60 13 (in - 1163)
Қазақша Русский English
MOST READ
Month Year
Recorded history of Kazakhstan. Part 2
Heroic mothers of the great steppe
How had the World War II been started?
Philosophy of the Emblem
14 monuments at Tekturmas
The rural akims: the country's hope is in the elections
Kazakh historical drama Tomiris premiered in Istanbul
Stolypin about the worries and hopes of immigrants to the Kazakh steppes
ALASH IDEA IS THE PROTECTION OF KAZAKH STATEHOOD
A tireless explorer of the Kazakh land
SWITCHING TO THE LATIN ALPHABET – UNITE ALL KAZAKH PEOPLE
Kunaev Dinmukhamed Akhmedovich
People who eat horses will kill you
Materials on theme
Archaeologists discovered the mausoleum of Zhanibek 5 years ago
Election will give opportunity to decrease budget expense
A solemn meeting devoted to the Independence Day of the Republic of Kazakhstan was held on December 14, 2013 with the participation of the President Nursultan Nazarbayev.
The museum that has no analogues